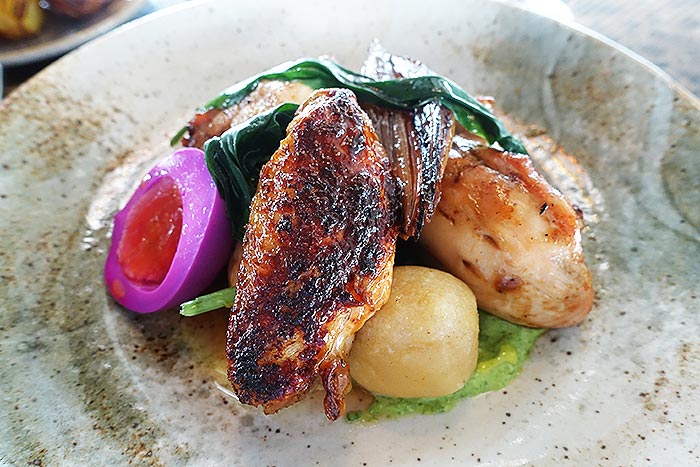 What can you tell us about Craft London?

It's the latest from Stevie Parle, best known for Dock Kitchen in Kensal Rise and Rotorino in Dalston. Craft is actually three places within one building - a ground floor cafe (which has been opened for a few months), top floor bar (with views of the O2) and the main restaurant.

The restaurant, which we visited for lunch, is more like Dock Kitchen than Rotorino and there's a big focus on seasonality and sustainability. Most of the menu is sourced from the UK or grown locally. And they keep their own bees, so it's worth trying their honey. In addition to that, the chefs butcher, cure and smoke the meat themselves, and roast their own coffee. All this is pointed out on a little addendum to the menu.

Being right out by the O2, it's not normally the sort of place you'd head to unless you were seeing something at the O2 or trying out the cable cars across the Thames. But even if you're heading out to North Greenwich just to visit Craft, then it'd be worth the journey. It's ideal for foodies looking for something a bit special and it's absolutely perfect if you're going to the O2. Then it's a must-visit, being clearly the best restaurant in the area by a long margin.

There's also a special speedy pre-gig menu for £35 if you order before 7pm. That takes 60 minutes  - ideal if you're popping in for an quick early dinner.

Just a few steps from the entrance to North Greenwich tube, on the way to the O2. It's hard to miss - a big circular glass building. Although note that the restaurant has a different entrance from the main cafe.

Where should you meet for a drink first?

Although the Meantime bar across the way certainly got our attention - as did the recently opened Yalla Yalla pop-up - the only answer to this question should be to head up to the top floor of Craft for the bar which takes up the entire top floor. It's an impressive room (the outside terraces will be great for warmer months) and the cocktails are very fine indeed, prices between £9 and £10. These are from Adam Wyatt Jones, formerly at Milk and Honey and of those we tried, the Somerset Hare was a real winner, featuring gin, Somerset 10, absinthe, ginger and their SE10 honey. It certainly packed a kick and we likes the sound of the Craft London coffee-infused Old Fashioned too.

Once back down in the restaurant, by the window's probably best (although there are some decent booths too) and get a view of the open kitchen if you can.

There's little doubt that the food at Craft London is excellent, making it one of the best openings of the year (so far for us). The menu is full of lots of things you'll want to order - but it's not cheap, so watch for over-ordering. That said, there are a number of set deals with a three course set lunch menu available on Saturday too and a £65 tasting menu if you want to try as much as possible. We went a la carte, but should mention that we missed one key dish. That's the clay baked duck for £70 and if your budget stretches to it (or perhaps if four are sharing), that's one of the signature dishes (read what Fay Maschler thought here).

As for the rest of the menu, real standouts were:

This is scraping the surface of the menu - looking back at it now, there's just so much to recommend (and to try on a return visit). It's also worth recommending popping into the cafe downstairs after leaving - particularly for the custard tart, a slice at £2 was a bargain.

We've already mentioned the excellent (and boozy) cocktails but wines start at £22. The UK puts in a showing on the wine list too with the SW6 Chardonnay from London Cru worth a try.

The restaurant at Craft London is a very easy recommendation. It showcases some of the best of Stevie Parle's food with real attention to sourcing everything as locally as possible. Everything both looks and tastes wonderful. The O2 may seem like a bit of a trek, but it's a restaurant you really should make the effort to visit.

Hot Dinners were invited to Craft London. Prices were correct at the time of writing.