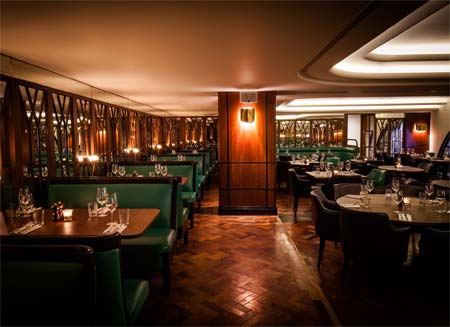 What can you tell me about Hawksmoor Air Street?

Hawksmoor first started as a - comparatively - small steak restaurant in Shoreditch. At the time, it's fair to say that finding a good steak in London was a hard thing to achieve, but Hawksmoor changed all that. The steaks were as good as you'd find across the Atlantic and, most importantly, they managed to once again make steakhouses appealing to everyone - particularly with a strong selection of cocktails (the bars at Hawksmoor are almost as important as the restaurants). So it's fair to say that Hawksmoor paved the way for the growing number of properly good steak restaurants in London.

So, with a number of competitors entering the field, what's a steakhouse to do? Well in this case, the answer is to to add surf to turf. While some steakhouses are happy to add a lobster or two to the menu, Hawksmoor Air Street divides the menu evenly between its signature steaks and a brand new sustainable fish section. What's more, that section is being overseen by Mitch Tonks, a man well versed in seafood and who has just won restaurant of the year in in the latest OFM Awards for his seafood restaurant, The Seahorse, in Devon.

Hawksmoor has taken over a huge upstairs space just off Regent Street (you can see the shopping crowds bustling outside through the stained glass windows). The room used to host Cocoon (and for a brief time Senkai) but is possibly best known to many as the original home of Bruno Loubet with L'Odeon in the 90s. It's a few steps from Piccadilly Circus so it's right in the heart of London.

First off, it's certainly right for anyone who's ever been to a Hawksmoor before. If you're a fan, you should be beating a path to Air Street to put the seafood menu through its paces. But, given the location, it's also a slightly more glitzy affair than the existing Hawksmoor restaurants so particularly suitable for a special occasion. It's best, we think, to go with a few diners - either entertaining relatives or out with friends or workmates - as we imagine it'll get quite buzzy when compeltely full.

At the very least, you should make sure that you have arrived in time for a pre-dinner drink, as Hawksmoor are rightly well known for their cocktails. We tried the Dandy and the Shipwreck Sour and both were excellent (and available at other Hawksmoors too). The bar itself is a large space and ideal for a quick snack. There won't be a specific bar menu for this restaurant (although that could change) but it will be possible to order dishes from the main menu.

If you want to go further afield, then you can also get fine cocktails at nearby Pollen Street Social, or heading in the opposite direction head downstairs at Hix Soho to Mark's Bar.

We'd heard that the restaurant was huge, but even this didn't prepare us for the scale. The largest Hawksmoor, it seats over 230 throughout a long curved room. Essentially, it's big enough that one of us almost managed to get lost. However, because the room is narrow and long and naturally split into sections, it never really feels too big. If you've been to the building before, you'll notice that they've raised the ceiling and lowered the floor to give the room more breathing space. Indeed the dining room now feels like a cruise ship parked in the middle of London (in a good way).

As for seating, we'd recommend moving into the restaurant a little, so that you get the most of the ambience. We were happy in the booths by the left side but also liked the look of the tables that were by the stained glass windows looking over Regent Street. And if there are eight of you - the round tables looked perfect for a group meal out.

As mentioned, the menu makes a significant departure from previous Hawksmoors. That said, if you want to order the steak of your choice than that's still an option. But there's so much more on the menu that we'd highly recommend mixing it up a bit.

The starters are an area where the addition of seafood immediately makes its presence felt (although there are now also snacks of pickled cockles and Falmouth prawns which you can order while you're making up your mind). So on our visit, we opted for fried queenies (£8) and shrimp on toast (£10). Both were excellent - there was a generous selection of warm brown shrimps on the toast but the standout here was definitely the fried queenies (small fried scallops in breadcrumbs). This has immediately become one of our favourite snacks in London. It was paired with a tartare sauce that again was simply the best we'd ever tasted. We'd buy it by the bucketload if Hawksmoor decided to sell it.

For mains we decided to mix it up a bit, ordering a selection of steak and seafood to make the best of the menu. So we had the ribeye steak, half a monkfish, half a lobster plus chips, onion rings and greens (the latter as a bit of a healthy balance...). The steak was a fine piece of meat and was cooked exactly as ordered - the best you can hope for at a steak restaurant and exactly what you should expect from Hawksmoor. However, it was the fish that really surprised. Mitch Tonks was there when we visited and advised us to try the monkfish cooked on the Josper grill, his signature dish in the Seahorse. It was some of the best fish we'd ever had - and left us wishing we'd ordered a full one. It also, happily, made a perfect accompaniment to the steak - so much so that we now couldn't imagine ordering a steak without fish on the side. The lobster too was excellent - incredibly sweet in a way that we haven't experienced for a while as it was steamed whole in the shell. Seasoning was perfect on both.

As for dessert, we were - slightly unsurprisingly - a wee bit full, so we decided to just have a sundae. Although on reflection, this doesn't seem like taking it easy at all - both the plum and sticky toffee pudding sundaes were huge - but still gratefully devoured.

Finally - don't leave without ordering the salted caramel rolos. They've turned out to be a talking point on Twitter in their own right and are just as great as they sound.

With a new seafood section we were interested to try the larger white wine selection and our sommelier recommended a real cracker to us from the wines by the glass section - Domaine Belluar 'Le Feu' Savoie 2009. He picked it out especially for Hawksmoor Air Street and it carried us brilliantly through our starter section to the steaks.

And how much will this set me back?

It's not going to be cheap - neither a good steak restaurant or seafood restaurant is ever going to be - but it's really well worth splashing out for a special occasion. That said, the pre-theatre menu is a bargain at £22 for two courses and £25 for three (available 12:00 - 3pm and 5-6pm).

We were not entirely sure how the steak and seafood offerings would work at Hawksmoor before we arrived, but now we can't imagine not ordering a selection of both in future. It really does feel like the next step in Hawksmoor's evolution and a cunning progression for steakhouses in general.  When we visited, it was their very first evening service and both service and food was remarkably accomplished, especially given the large scale of the operation. We think this will deservedly be a massive hit -  a real destination restaurant in London.and recommend you book a table as soon as you can. We'll definitely be heading back.

Prices were correct at time of writing. Hot Dinners were invited to eat at Hawksmoor.