[SIGPLUS_EXCEPTION_SOURCE] Image source is expected to be a full URL or a path relative to the image base folder specified in the back-end but /blog/2014/beast/gallery is neither a URL nor a relative path to an existing file or folder.
0
Shares 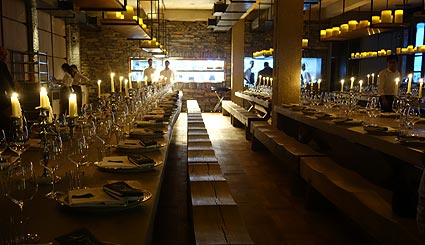 What can you tell us about Beast?

"Think of it more as a dinner party or a banquet where everyone's having the same food," is how Dave Strauss, GM for Goodman Restaurants and Burger and Lobster who are the people behind this West End restaurant, describes Beast. One thing's for sure - this is nothing like any restaurant you've been to in London. Yes it's high concept, yes the menu is no-choice, but trust us, this is just different..

On Chapel Place which is the kind of hidden London street you've probably never been down before, running up alongside House of Fraser on Oxford Street. No 3 looks a bit like a gallery from street level - the kind's that's so high concept it doesn't actually feature any art in it - but this is the reception to the basement level restaurant.

It's pretty barren territory here. You could go for a glass of wine at 28:50 which isn't too far away or just meet them downstairs in Beast's small-ish bar. The first thing you'll see as you go downstairs - a massive lobster tank and meat fridge.

Once you're downstairs you'll know why this is an interesting question. At Beast, seating consists of three huge banquet-style tables running the length of the dining room. Each seats 40. Benches - with spaces hewn out of the wood denoting where to place your backside - is where you'll be sitting.

The tables are massive (they were constructed by the team who did the Hogwarts hall set of the Harry Potter movies. This means couples will be sat alongside each other, as you'd never hear each other across the table otherwise. The acoustics and layout are such that Beast is probably a much better bet for a group outing than a romantic dinner a deux.

There is no menu - what you'll be having will be explained to you by your waiter. When we popped in during the soft opening, starters consisted of an enormous quarter wheel of Parmesan in front of us, with a little hacking tool to tap chunks out of it. There were also olives and artichokes, but mainly this is a holding phase because you're really waiting for the main event.

Which is what exactly?

Steak and king crab. The steak comes in two cuts, sirloin and rib eye, served off (but with) the bone. Given the group's Goodman background, these are very, very good. They come with truffle sauce, and Hoi Sin sauce and you'll want to gorge yourself on them, but hold back because of the crab.

King crab is something we'd never had before. The alien-looking creature, hailing from the Arctic Circle, that's brought to your table carries all of its meat in the long spindly legs. There are various crab meat extracting tools, once split, it's very easy to get at the crab meat. And that meat is extraordinarily rich and buttery in taste and texture, made more so by the lemony butter sauce it's served with.

There are but to be quite honest we didn't pay much heed to them. There was a nice butterleaf lettuce salad and some tasty heritage tomatoes in another dish. We weren't particularly enamoured by the bourbon apple slices though.

If you make it this far - and we did - you can choose from two desserts, a deconstructed cheesecake mousse which was delicious and a lemon posset which was perfectly nice but nothing to set the world on fire.

Anywhere that costs £75 a head for dinner isn't going to have a cheap wine list and Beast doesn't disappoint. There are three whites and three reds by the glass at £12.50 and a rose for the same that comes from the vineyard owned by the Bamfords behind Daylesford. We found a Gruner and a Côtes du Rhône for £35 but from that point onwards it jumps right up to the £70-ish mark.

Beast has a truly extraordinary dining room and serves up excellent steak and crab. But will Londoners love it? We wouldn't bet against anything that the company that brought up Burger & Lobster turns out, although the cost is such that it may only attract a certain type of Mayfair or hedge fund clientele who are bound to love this. This would be a shame as it's great fun if you have the money for it.

Beast is at 3 Chapel Place, London W1G 0BG. Find out more about Beast

Prices were correct at time of writing. Hot Dinners ate as guests of Beast.