[SIGPLUS_EXCEPTION_SOURCE] Image source is expected to be a full URL or a path relative to the image base folder specified in the back-end but /blog/2013/boopshis/gallery is neither a URL nor a relative path to an existing file or folder.
0
Shares 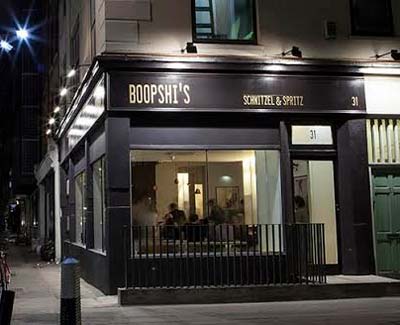 What can you tell us about Boopshi's?

It's a high concept schnitzel and spritzer restaurant - the creation of brothers Ed and Ben whose Austrian grandparents instilled in them a love of covering meat in breadcrumbs and deep-frying it.

On the corner of Whitfield and Windmill Street - yet another new opening helping to make Fitzrovia an ever more interesting place to eat out.

Where should I meet a friend for a drink first?

There's only one real answer to this - downstairs in the bar. The entrance is separate to the restaurant - you go down the stairs to an unmarked door in the basement behind which is a small but perfect formed little dive bar serving up great cocktails (as well as wines and beers from the main drinks list). The main cocktails list here is Boopshi's version on a variation of classics, so the Continental Treacle is their take on an Old Fashioned. Negroni purists should look away now as there's a Holy Moly Negroni with Kirsch and sour cherry wine too. Prices range from £9 to £10.50.

Back upstairs in the restaurant there are high tables for two with stools up along the wall, but our money's on the tables by the window where you can watch the world go by as you sip your (wonderfully alcoholic) Prosecco spritzers.

Presumably you'll say we should try the schnitzel?

Of course! The menu here is blissfully brief. There are three types of schnitzel, British rose veal (£14.50) rare breed pork (£11.50) and chicken (£10.50). There are a number of other dishes you could try - such as frankfurters or trout with bacon and mushrooms for example - but if you're not going to try the schnitzel why would you be here? We tried both the pig and cow varieties, of which the rose veal stood out - not least because it was topped with a fried duck egg. That's one thing to bear in mind - the schnitzels can be a little dry, so you'll need sauces or a side dish with sauce to match that. The spatzel 'n' cheese side (£3.50) did the trick for us.

While we did share an Austrian cold meat board to start (£9) we'd urge you to leave a little room for the desserts. We tried both the poppy seed tart (£6) and the try-and-pronounce-it-after-a-few-too-many-spritzers Kaiserschmarrn which turned out to be a fruity pancake served up with either custard, cream or ice-cream. It was easily big enough for two.

There's Prosecco on tap at a very reasonable £4.50 for a 150ml glass as well as a short, well-priced European wine list - but we couldn't resist trying their Gruber Roschitz Gruner Veltliner at £29 which was one of the best Gruners we'd had in ages.

Boopshi's feels like a family restaurant - albeit a high concept, trendy central London one. The welcome is warm, the drinks will give you a similar glow and after all who doesn't like schnitzel?

Prices were correct at time of writing. Hot Dinners ate as guests of Boopshi's.