[SIGPLUS_EXCEPTION_SOURCE] Image source is expected to be a full URL or a path relative to the image base folder specified in the back-end but /blog/2014/lockhart/gallery/ is neither a URL nor a relative path to an existing file or folder.
0
Shares

Southern US cooking in Marylebone - we Test Drive Lockhart 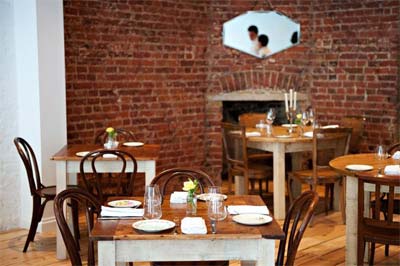 What can you tell us about Lockhart?

Lockhart, a Marylebone restaurant specialising in Southern US cuisine, originally opened in 2013 with another chef at the helm and generally failed to woo critics on its initial outing. However, that's all changed now as new chef Brad McDonald has come in to take over the kitchen and completely revitalise the menu in the process.

We were first alerted to McDonald by the Clove Club's Isaac McHale, who recommended that we try out the American chef's food while he was working, somewhat under the radar, at Casa Negra in Shoreditch. We duly popped along to check it out and were impressed, but clearly the chef needed somewhere with a little more creative freedom to really show what he's capable of. Judging by the food we ate at Lockhart, he now appears to be in his element.

It's on the edge of Marylebone, just north of Marble Arch, on Seymour Place. The small road is dotted with a surprising amount of good restaurants and we'd be surprised if the area doesn't continue to grow as a food destination.

There are two places we'd definitely recommend. First up is Vinoteca Marylebone, just across the street from Lockhart. You really can't go wrong with a Vinoteca and it'd be perfect for a pre or post meal drink. We also particularly love Donostia, which is just down the road. It's mainly for eating at the counter - but you may be able to pop in and grab a glass of Txakoli if it's not too busy.

Lockhart itself also has a large downstairs bar that, based on a quick peek, would be well worth a visit even if you weren't having a meal there. We've been reading with considerable envy about the muffaletta sandwich (Napoli salami, mortadella, hot capicola, provolone cheese) that's also available as one of the biggest bar "snacks" we've seen. We will definitely have to make a second visit to check that out. The cocktail menu also looked promising, with cocktails between £9 and £11.

The tables are pretty spaced out in an airy room, so we think pretty much anywhere would do fine. However there are a few seats looking directly into the kitchen if you really want a close-up view of the chef in action.

The Lockhart has one of those menus you're always happy to see when you visit a restaurant - one where you could easily order everything. And while we would have been managed (albeit painfully) to whittle that choice down for the night, we were instead told that they wanted to give us a chance to try as much of it as possible - and we were more than happy to let them.

The menu itself is divided into appetizer and entrees with some snacks to keep you going while you choose. Of the snacks, the grilled chicken oysteys with yellow mustard BBQ dressing were easily the winners - frankly any restaurant which offers chicken oysters as a snack has our instant approval - although the catfish goujons were also good.

While you're waiting, you'll also get the crackling bread with house cultured butter. This would, by itself, be wonderful bread for any restaurant, but is eclipsed by what's to follow...

It was catfish again for the appetizers with catfish gumbo, but here the real winner was the dirty rice with west Mersea oysters (plus bacon bits and offal in the mix too) which made a return in the main courses as the stuffing in the stuffed and glazed quail. Another main, the venison saddle and roasted apple with red eye gravy was also excellent. McDonald has said that he's excited about Britain's supply of game and wants that to have a greater focus on the menu in future - this will definitely be a place to go on the Glorious Twelfth. Finally on the mains - Shrimp and Grits were the best representation of that classic Southern dish we've personally had and this may well be the best version you'll get in the country at the moment.

It's also worth mentioning the buttermilk chicken - on the menu at lunch and an off-menu item at dinner that you'll want to order too - that McDonald does effortlessly well. Side dishes (all £4) also showed equal attention by the kitchen. When we were there, there was sweet potato potato puree - deliciously decadent mash. And then there's the corn bread which is baked to order. This comes piping hot to the table whenever it's ready - slathered in honey butter - and has already reached near-legendary status if our Twitter and Instagram feeds are anything to go by.

Finally the short dessert menu (just two to choose from at £6) were calas (rice batter donuts served with toasted fennel seed pollen and vanilla infused chocolate) and lemon ice box pie. The surprisingly light doughnuts will definitely be a draw but for us, the lemon box pie is really the one to go for. It's essentially a deconstructed lemon meringue pie ("about as deconstructed as I'm likely to get" McDonald told us). This was layered with lemon curd ice-cream from Ice Cream Union, Italian meringue, and graham cracker crumbs. Quite brilliant.

Drinks-wise, there's an interesting cocktail list and a short well priced wine list that starts at £19 for the decent Californian chardonnay that we had. There's a good showing of American wines on the list - and if you really fancy splashing out, there's a Kistler pinot noir from Sonoma for £110 too as well as a New York sparking for £46. Plenty of American beers are available by the bottle too.

We've been really looking forward to trying Lockhart ever since we heard about McDonald taking over. He's definitely a chef to watch and we can see him going from strength to strength at a restaurant which really lets him do his thing. As word gets out, this'll be a hard place to book. Get in there first.

Lockhart is at 22-24 Seymour Pl, London W1H 7NL. Find out more about Lockhart.

Prices were correct at time of writing. Hot Dinners ate as guests of Lockhart.