[SIGPLUS_EXCEPTION_SOURCE] Image source is expected to be a full URL or a path relative to the image base folder specified in the back-end but /blog/2012/boqueria/gallery is neither a URL nor a relative path to an existing file or folder.
0
Shares 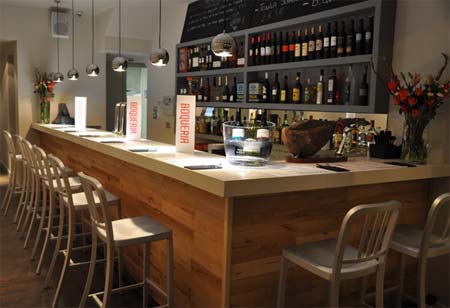 What can you tell us about Boqueria Tapas

This ‘contemporary tapas bar’ opened in early 2012 and has been receiving very favourable reviews for both the service and the food since.

Equidistant from Brixton, Clapham Common and Clapham North Underground stations, Boqueria is situated in a relatively lonely spot on Acre Lane. As a warning it’s a good 10 minute walk from each so you may wish to grab a cab if it’s pouring with rain or, like Hot Dinners, you’re stuck in impractical shoes for the evening.

Boqueria’s off-the-beaten-track location, and friendly, informal style makes it an ideal spot for South London locals to meet for a few drinks and a bite to eat after a long day at work. We were surrounded by tables of young couples and groups of friends catching up over some wine and chorizo. As it’s open on a Sunday, it’s also probably the perfect place for a long lazy lunch with friends.

If you’re familiar with Clapham and/or Brixton you’ll know that there are plenty of places located around the Underground stations to dive into for an aperitif. Given that Boqueria is a 10 minute walk from each, the options closer to the restaurant are The Coach & Horses on Clapham Park Road if you’re coming from the Clapham Common direction, or Grand Union bar is also located across the road from Boqueria. That being said there’s a decent sized, and well-stocked bar at the front of Boqueria, so you could always kick off with an aperitif there.

Boqueria is not a massive place, but it’s well-designed. The long sleek, white bar sits at the front of the venue, inviting passers-by in for a drink on a spontaneous voyage of discovery. The restaurant tables are nestled in the back area, which is a good idea given that we imagine the bar can get pretty busy on Friday and Saturday evenings. The main restaurant has a mixture of standard tables along one side of the long room, and banquette tables along the other. The banquettes are comfortable, however if you prefer a bit of sunlight, you may wish to sit at the standard tables as they are situated beneath large skylight windows stretching the length of the room, bathing you in daylight as you eat.

Sadly not, but it’s worth ordering as the crusty white loaf comes in very handy for mopping up all of the sauces and oils left over in the bowls once you’ve finished off your tapas.

Being described as ‘contemporary’ we got the distinct impression that the adjective wasn’t just used to describe the clean, veneered décor, as despite a few old favourites such as Patatas Bravas, Croquetas, Tortilla Espanola and Calamares, on the menu, there were quite a few more exciting looking choices.

We opted for 2 choices from the specials menu – Solomillo de Credo con Salsa Boletus (Sirloin of Iberico Pork served with a Mushroom Sauce) and Queso de Cabra con Cebolla Caramelizada (Goats Cheese with Caramelised Onions). The goats cheese arrived first, and really was the highlight dish of the evening. It was perfectly prepared and presented with the sweet onions playing a great partner to the creamy and subtle-flavoured goats cheese; a real treat. In addition to the specials we also ordered Fabada (white beans, chorizo and bacon), the Bunelos de Bacalao (Cod fritters) which were delicious but could have done with being more generously filled and a bit crispier with the batter and the Medallones de Cordero a la Espanola (Lamb Medallions in a Spanish style sauce).

This was perfect for 2 people and left just enough room to crowbar in a dessert option too. Diplomatically we ordered 2 desserts and split them between us. We had the Crema Catalana which was just the right balance of flavours (ie: not overly sweet), and a scrumptious Tarta de Santiago (almond cake) that was surprisingly light and served with an intense, dark chocolate sauce.

As it was a quiet Tuesday evening, we resisted the temptation to slide into a bottle of Rioja, but had a bottle of San Miguel and an Alhambra to accompany our meal. The wine list looked tempting however offering up a range of Mesta Blanco 2010 at the lower end of the whites for £13 a bottle up to Martin Codax, Rias Baixas 2010 at £25.70. Or for the reds there’s a Vina Albali, Valdepenas 2012 at £13.50 a bottle up to a Marques de Riscal, Rioja Reserca 2006 at £42 a bottle.

If we lived nearby and Boqueria was our local tapas bar, we’d probably be really rather chuffed….and plump. It’s a nice, friendly place that serves good food at more than decent prices. The bar is a cool space, and no doubt attracts a good crowd of an evening. If you’re in the area it’s certainly worth dropping by for a bite, and if it’s not on the menu just beg the chef for the goats cheese…it’s really very good indeed.

Find out more about Boqueria

Hot Dinners were invited to eat at Boqueria. Prices are correct at time of writing.