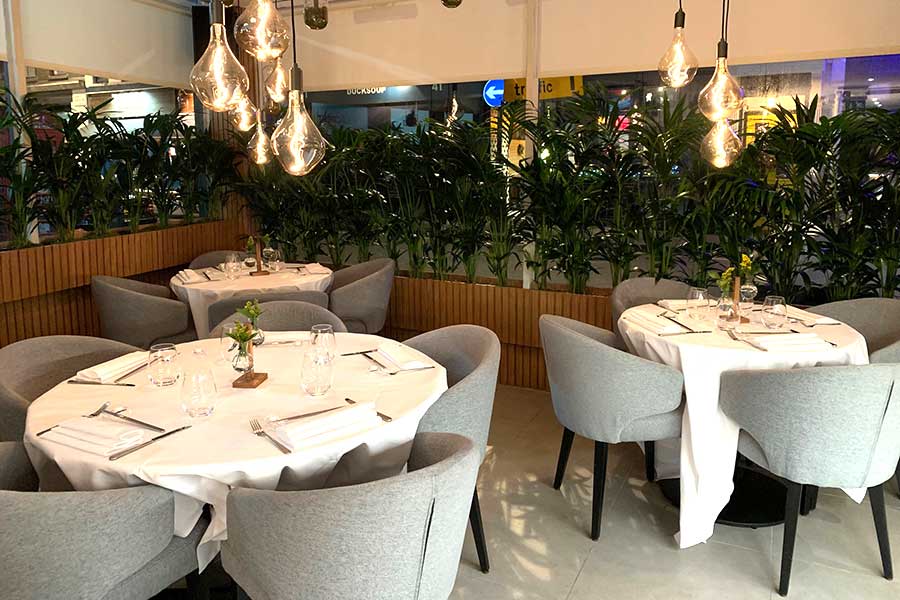 The transformed dining room at SoLA

So what do we need to know about SO|LA?

Quite a lot really. When we first heard about it we thought restaurateur Victor Garvey was merely swapping out one restaurant concept for another, switching SO|LA for what was his Spanish restaurant, Rambla. But actually there's a lot more going on than that.

For starters, the space has been completely overhauled, including moving the kitchen, enabling them to turn this from a more casual Soho spot into the fine dining Californian restaurant of his dreams. Now it's all tablecloths, trolley service and wine matching. The other big change is that Victor has switched from host to chef, getting back into the kitchen.

If you hadn't been to Rambla before, then you'll find So La opposite the Groucho on Dean Street. The nearest tube is probably Leicester Square.

You're not short of places because - it's Soho, but around here our main recommendation would be The French House, just down the road. And, if it's cocktails you're after, how about Wun's on Greek Street?

If it's Californian food, what exactly is on the menu?

By Californian, don't think avo toast or tacos -  this is the Californian cuisine of The French Laundry or Chez Panisse. There's a choice of three menus - a la carte, prix fixe (five courses for £49) and a degustation menu, which might initially sound punchy at £97 until you realise that includes 12 dishes.

Here's what we had from the snacks and small plates section of the a-la-carte: 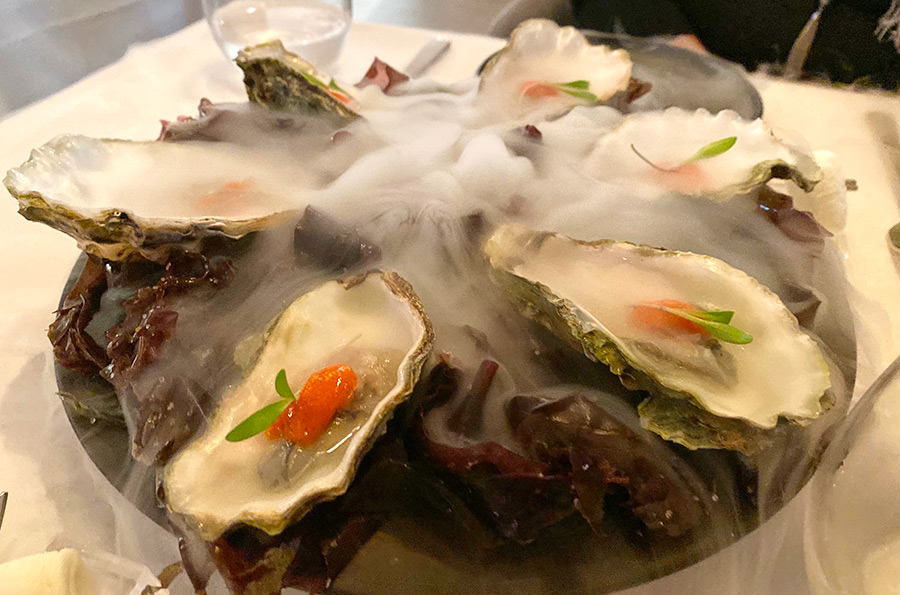 Dressed oysters with "Cocktail Sauce" Sorbet and Aged Tequila Mignonette (£18 for six) - oh and quite a lot of dry ice... 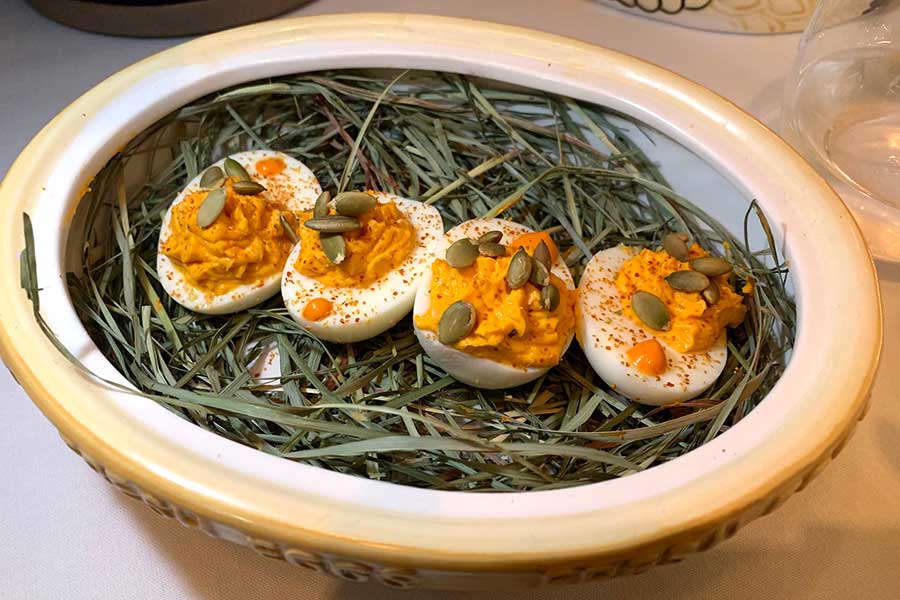 Devilled Eggs with Dijon Mustard, Toasted Pumpkin Seeds and Togarashi (£4) - as regular readers will know, devilled eggs are a death row dish for us and these gorgeous ones thankfully wiped away the memory of some truly rubbish ones we had in Miami. 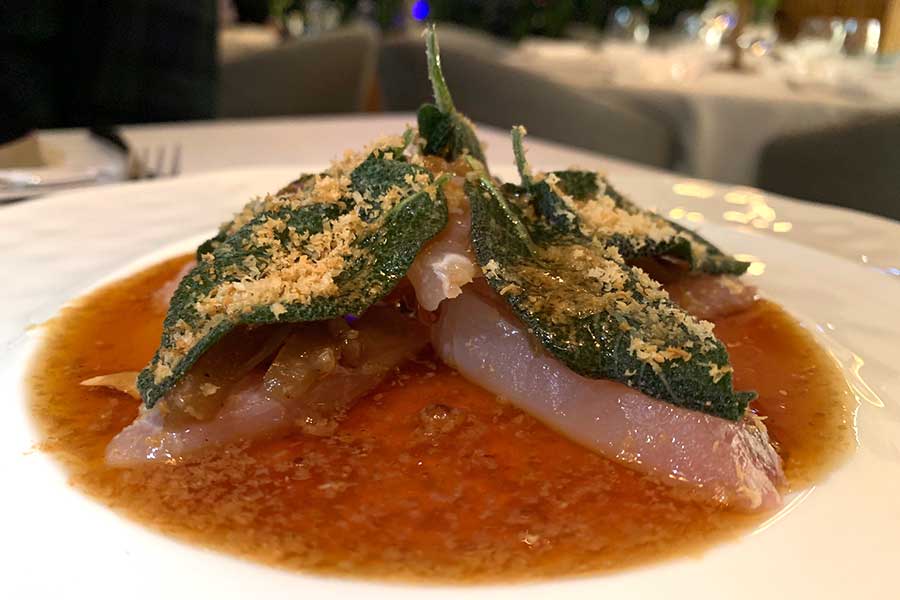 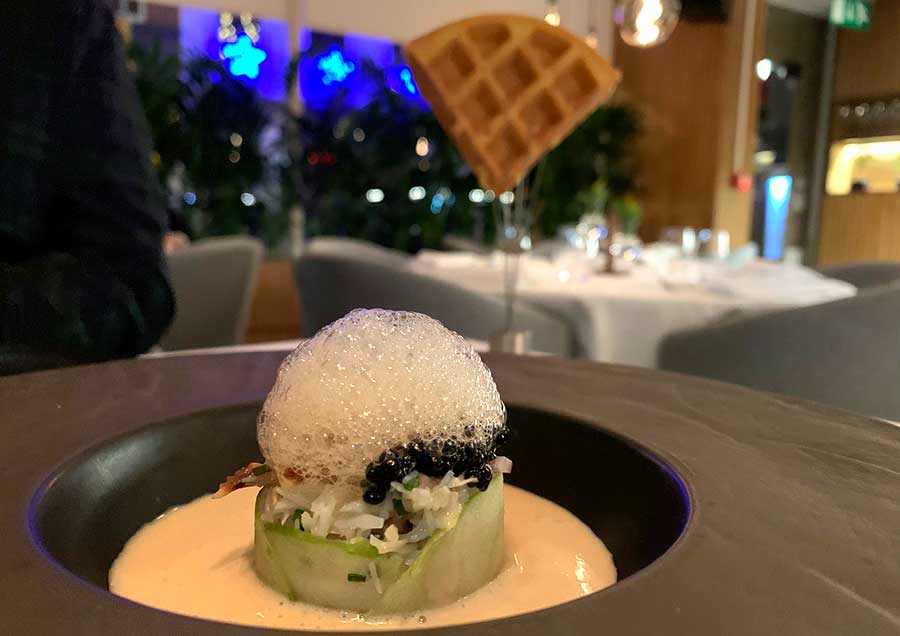 Dungeness crab - with caviar in a chilled almond soup, slivers of green apple and a seaweed waffle (£14). Note to the uninitiated - Dungeness is a very high quality American crab from the West Coast - this hasn't just come up from Kent.

There's also a small choice of larger dishes to share. On the night we went you could choose from whole Landes chicken served three ways (£38). Those three ways are - as tortellini en brodo (which we tried a taster of - it was VERY good), an oyster and cod cheek robata yaki and finally, the breast is served with roast bok choy and schmaltz mayo. It really does sound very good - but we plumped for the other main... 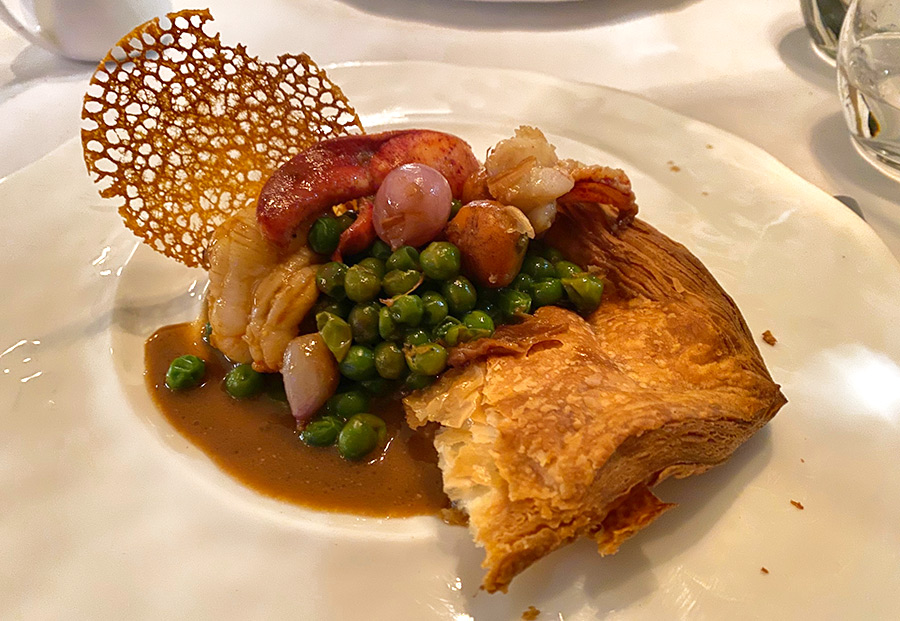 One of the large sharing mains - the lobster pot pie (£40) - a generous serving in a Banyuls sauce, made with the most amazing pastry.

There are some interesting veggie dishes on the prix fixe - including a Ramp, Artichoke, & Fontina Tart and Sunchoke Tortellini with Medjool Dates, brown butter and grapefruit but we can't imagine they'd be better than this following dish of veggie dreams: 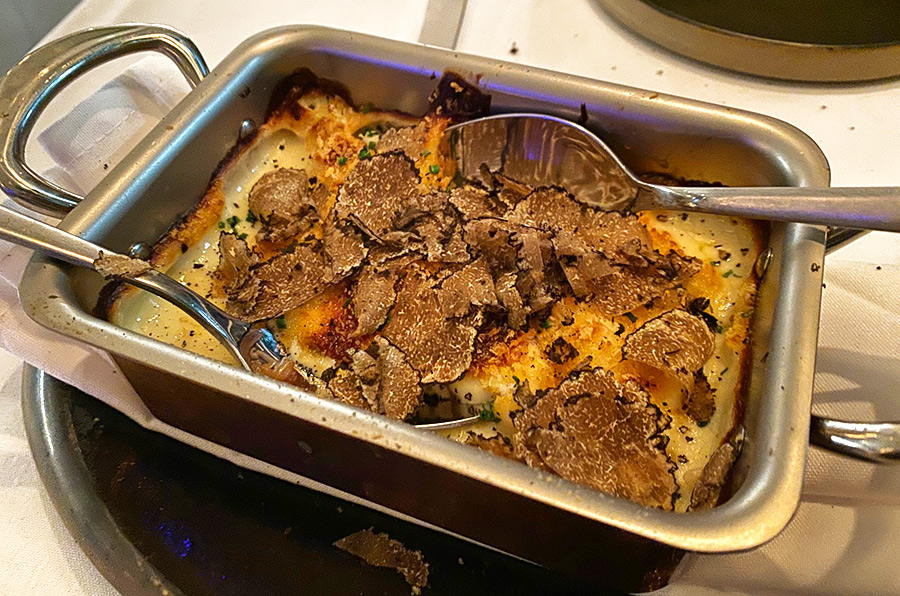 Gratin of cardoons (£14) - made with aged Comte and tobacco shallots, with winter truffles shaved all over it. Forget mac 'n' cheese - THIS is what you really need in the winter.

Absolutely. We tried both desserts on the a la carte - and if you go for Prix Fixe or Degustation you'll get a visit from the Dessert Trolley. 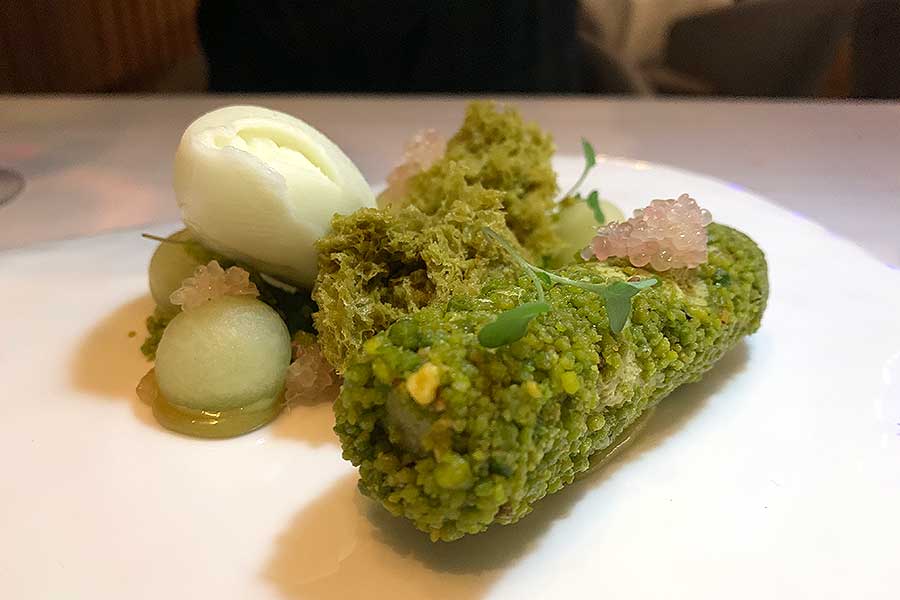 Pistachio semi freddo served with gala melon, calamansi and lemon verbena - if you love pistachio (and we do) this will be very much up your street. 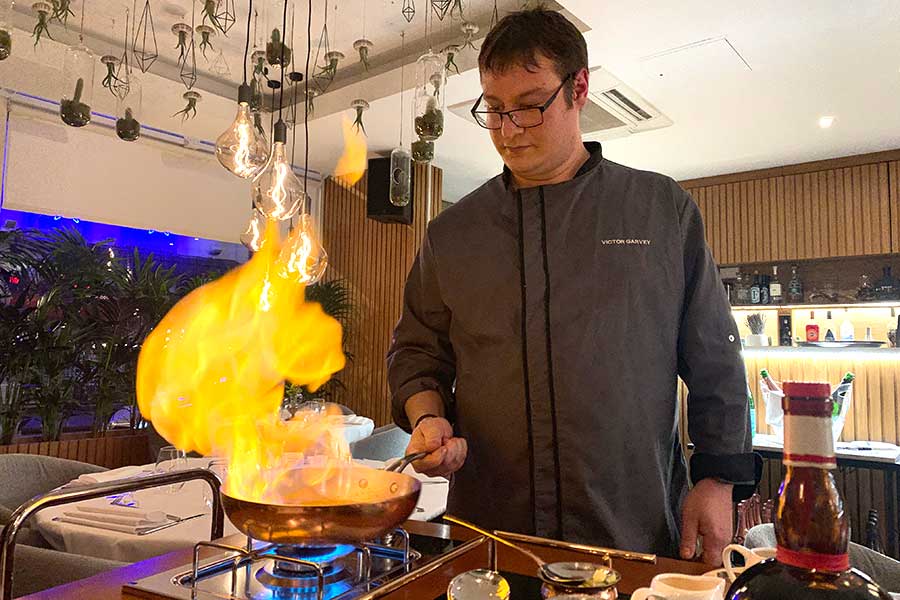 Crepes Gisele (rather than Suzette) (£14) - here the classic dish is made using satsuma juice and is served with Tonka bean ice-cream and toasted buckwheat. Like the original dish though, it's served with 100% theatrical aplomb by Victor at your table.

The list is by Zeren Wilson and focuses on California wine country. We kicked off with a glass of Quartet made by Louis Roederer in Mendocino County and followed that with the only American Albariño, from Ferdinand in Lodi. But maybe the best was the wonderful Green & Red which Zeren told us is the house Zinfandel at Chez Panisse and has been since the Nineties. This is the first London restaurant list it's appeared on apparently.

We weren't really prepared for what a transformation has been made to this space, both in terms of what it looks like but also what Victor is aiming for. What Soho has in SO|LA is a modern American restaurant that's really quite unlike anything else in London right now. Combine that inventive cooking with loads of flare in the presentation and you have a very special place indeed.

Hot Dinners dined as guests of SoLA. Prices are correct at time of publication