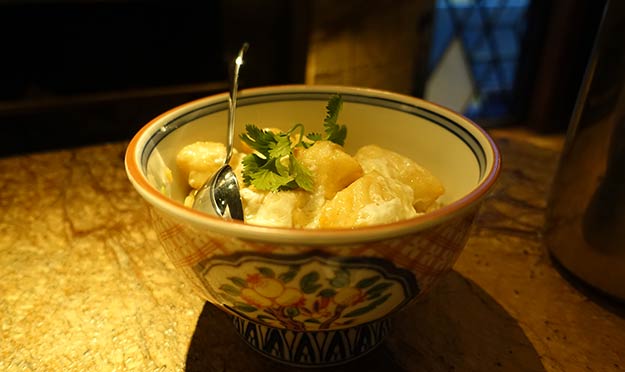 So what can you tell us about Duck and Rice?

To say this place was much anticipated is a bit of an understatement. Alan Yau fans, of which there are legion, have been waiting not-so-patiently for a long time to see how Yau's concept of a Chinese gastropub would pan out. He's taken what used to be The Endurance on Berwick Street and transformed it. Downstairs is a pub serving craft beer and bar snacks. Upstairs is the restaurant.

Why make things difficult? Meet them in the pub downstairs - if you're particularly early you could even have some gingko nuts with Himalayan salt or some of the sesame prawn toast that we forgot to order when we came.

The restaurant's reached by an iron spiral staircase and it opens out into a large dining room, split into various sections. If you're eating a deux, quite the nicest tables would be the tables for two by the window looking out over the market. There are lots of large tables here, so probably the best way to dine here would be in a group, allowing you to work your way through most of the menu.

This is a big menu - you might want to do, as we did, and order something quick while you take your time perusing the rest of it - of our snacks the most successful were the taro croquettes (£4.30 for three). Prawn crackers (£2) were those posh prawn crackers which, if we're being honest, weren't quite as nice as the bog standard ones from Chinese takeaways.

We tried two beer cocktails a Tank Old Fashioned (£8) and a Lager 'n' Stormy (£7.50) which were fun but might have been better in their more traditional forms.

And then we went to town on the menu - ordering much too much, the best of which included:

Obviously beer's a big thing here, but we fancied wine instead. We tried two - one of which - a Cotes de Luberon, the cheapest white on the menu at £23 was only so-so. But a glass from the monthly finds section of White Blend 'Apol' from Austrian producer Erwin Poller at £8.30 a glass was utterly moreish. This is the first time we've seen the opportunity to try a 70ml measure of wine on a menu - but we're much too fond of our wine to have tried this.

We dined here during soft launch (which we didn't know until the bill arrived) and, being greedy sorts, still managed to rack up quite a bill even with 50% off the food. We'd advise sticking to just a few main dishes and avoid adding too many of the snacks if you don't want your meal here to be too spendy. But what we had we really enjoyed. We'd happily return, maybe as part of a larger group to try some of the dishes we didn't manage to get around to this time.

The Duck and Rice is at 90 Berwick Street London W1F 0QB on 13 April. For more information, follow them on Twitter @theduckandrice