[SIGPLUS_EXCEPTION_SOURCE] Image source is expected to be a full URL or a path relative to the image base folder specified in the back-end but /blog/2012/tonkotsu/gallery is neither a URL nor a relative path to an existing file or folder.
0
Shares 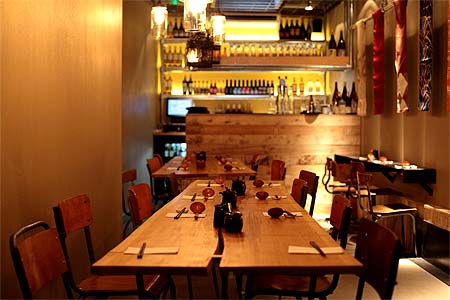 Tell me about Tonkotsu

It's the brainchild of Emma Reynolds and Kensuke Yamada, the people behind Tsuru Sushi and has been a fair while in the making. They've been holding regular ramen pop-ups over the past six months or so to test their dishes on London foodies. Having finally decided on the menu they've now opened up shop in Soho.

On Dean Street - almost opposite where the new Burger & Lobster is going to be. The look is pared back Japanese minimalism meets British canteen. The designers have made the somewhat radical decision of giving the key window space on Dean Street over to the open kitchen, which means that from the moment you enter you've got a good idea of what you're going to be eating.

It's a fun place for couples and small groups and particularly good for solo diners who could sit quite happily up at the kitchen counter and watch the chefs at work.

Where should I meet friends for a drink?

It's Soho, so you aren't short of places. There's the bar at Quo Vadis, The French House or the bar at the Soho hotel all within a minute's walk.

If you can't get a seat at the chef's bar or the table in the front part of the downstairs dining room, head upstairs to the lighter dining room. There are also two pavement tables should the weather be good enough for alfresco dining.

It's not that kind of joint.

The ramen (obvs). There's usually three on offer - the house Tonkotsu ramen (£11), a Tokyo Spicy (£9) and a vegetarian ramen (£9). The house ramen is apparently their take on the English breakfast, consisting of some rather fine smoked belly pork and half a soft-boiled egg, as well as the requisite noodles and beansprouts. As that's what everyone has been raving about on Twitter, that's what we tried and it was a hearty bowl of goodness. It's the kind of dish that makes you feel like it's doing you good in the most unlikely way - and should be a sure-fire hangover cure to boot.

While this is a ramen spot first and foremost, there are several additional dishes to try including three types of gyoza and chicken karaage. We tried the pork and prawn gyoza (£5) which we thought could have done with some punchier seasoning, but the chicken karaage leapt straight into the top 10 list of great things we'd eaten this year - boneless thigh meat, marinated in soy and garlic, then breadcrumbed and deep fried - it was fantastically moreish and we'd go back for a beer and a couple of bowls of these in a heartbeat.

We were here for lunch and didn't stray from the soft drinks side of the menu - the green tea was good, but we weren't too buzzed about the Dalston cola however trendy it's supposed to be. It would have been nice to have had some more non-alcoholic drinks to choose from - maybe a house carbonated water, for instance. That said, there's a cracking selection of interesting beers including Brewdog's Tokyo and a couple of Kernel beers as well as some Japanese whiskies, sake and shochu for you to work through.

Tonkotsu's a great little addition to Soho's crazily inventive dining scene at the moment. It's fast food that's taken an age to come to your plate in terms of the effort they've put into getting the ramen right. A bowl of ramen and a beer here would land you with a bill the right side of £15 which is cracking value for the centre of town. Just one real request please - a bib for energetic slurping would have been very useful.

Find out more about Tonkotsu

Hot Dinners were invited to eat at Tonkotsu. Prices were correct at time of writing.