[SIGPLUS_EXCEPTION_SOURCE] Image source is expected to be a full URL or a path relative to the image base folder specified in the back-end but /blog/2012/sliderbar/gallery is neither a URL nor a relative path to an existing file or folder.
0
Shares

Sliders, cocktails and more - we try out Sliderbar in Soho 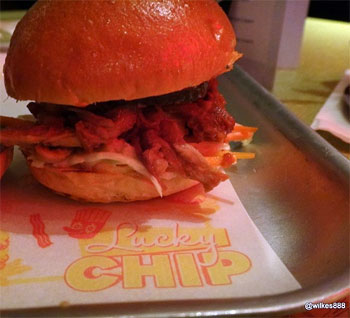 What can you tell me about Sliderbar?

Lucky Chip founder Ben Denner started selling burgers from a trailer in Kensal Rise. Fast forward a year later, Ben and the team at Lucky Chip have taken the London burger scene by storm, recently opening their third outlet, Sliderbar, based in Soho.

Interestingly, Sliderbar is far from being another replication of the offer at their Sebright Arms residence or Netil Market trailer. Instead, Ben has grabbed fast food by the scruff of the neck, attempting to pull it up a few notches on the quality scale. Expect an entirely new menu packed with starters, sliders, desserts and matching drinks with a couple of unexpected surprises along the way.

The 50-seater restaurant is situated in The Player bar Broadwick Street, Soho. If you've not been before it might pay to look at a map before you visit as, with no obvious signage it is easy to miss. Head past the bouncer, down some stairs and you'll find yourself in a cosy basement bar reminiscent of a 70’s rec room.

Anyone who enjoys the burger experience pioneered by other nearby outlets in central London will feel at home here. However, a more consistent drinks offer and interesting food menu will keep you coming back. The Lucky Chip team have worked to develop a menu that seamlessly slips into the relaxed ‘Soho London meets Soho NYC’ surroundings of The Player.

Those requiring a pre dinner drink won't need to go far as they will find themselves in the hands of the skilled bar team at The Player. If however things prove a bit too ‘Tokyo’ for your liking (which is quite likely given the anticipation around this opening), perhaps try heading around the corner to The Endurance or John Snow pubs.

If you're set on drinking downstairs, wander around the corner to the basement at sister bar, Milk and Honey for a cocktail.

Arrive early and you'll have the pick of the room. With just 50 covers available, arriving in groups larger than four might prove a challenge. The tables in the opposite corner to the bar are the prime spot.

Slides are the obvious choice here. There are 9 to choose from with rotating weekly specials (two for £12.50). One would be remiss not to order at least one of the supporting starters or desserts. Simple sounding items such as ‘Mac-N-Cheese’(£6.50), ‘Fish & Chips’ (£7.50) and ‘Chicken Bucket for two’ (£9.50) have been given a Lucky Chip upgrade using high quality ingredients and special preparations. The Ice Cream Burger (£4.50) is set to become a cult item.

What about those drinks?

For over a decade The Player has carved itself out as a popular Soho drinking hole, so even the fussiest drinkers are catered for here. Those who are there for an all-out Lucky Chip experience shouldn’t leave without trying the cocktails developed to match the food. ‘Lucky Juleps’ and ‘Grown up Floats’ are generously portioned and designed to comfortably rest in your spare hand (leaving the other one free to handle a slider).

After waiting months for it to finally open, we're pleased to report that Sliderbar is everything we dreamt of and more. A sandwich of exciting food, casual drinks set in comfortable surroundings, Sliderbar brings The Player some serious game.