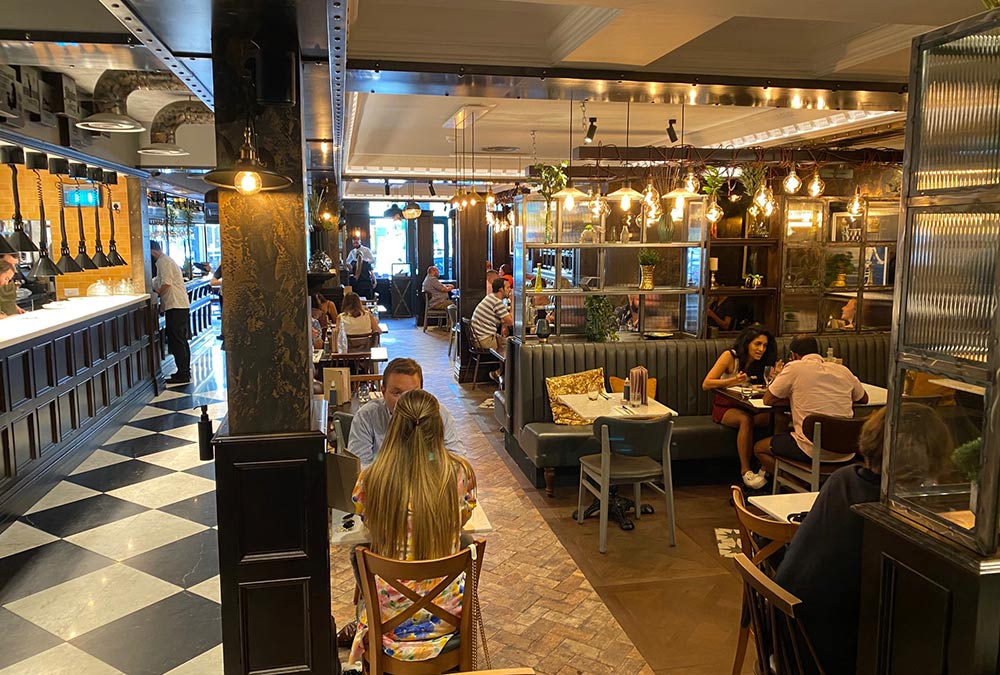 A look inside Six by Nico

What can you tell us about Six by Nico?

Although this is Nico's first restaurant in London, it's not a complete debut - there are already successful versions of this restaurant in Glasgow, Edinburgh, Belfast, Liverpool and Manchester. Scottish chef Nico Simeone's idea is a pretty simple one. There's a single set menu with six dishes on it - and that menu changes completely every six weeks.

There's usually an overall theme to the menu, as you'll see below. Sometimes it's based around a location - previous menus have included The Alps - and sometimes it's something completely different, like "The Mad Hatter's Tea Party". It's also only £35, which we think is very good value for what we had.

Ultimately it's a step between a casual restaurant and what could be considered more fine dining (although that term alone can be very broad), treading a fine line between the two - creating its own little niche in the middle. 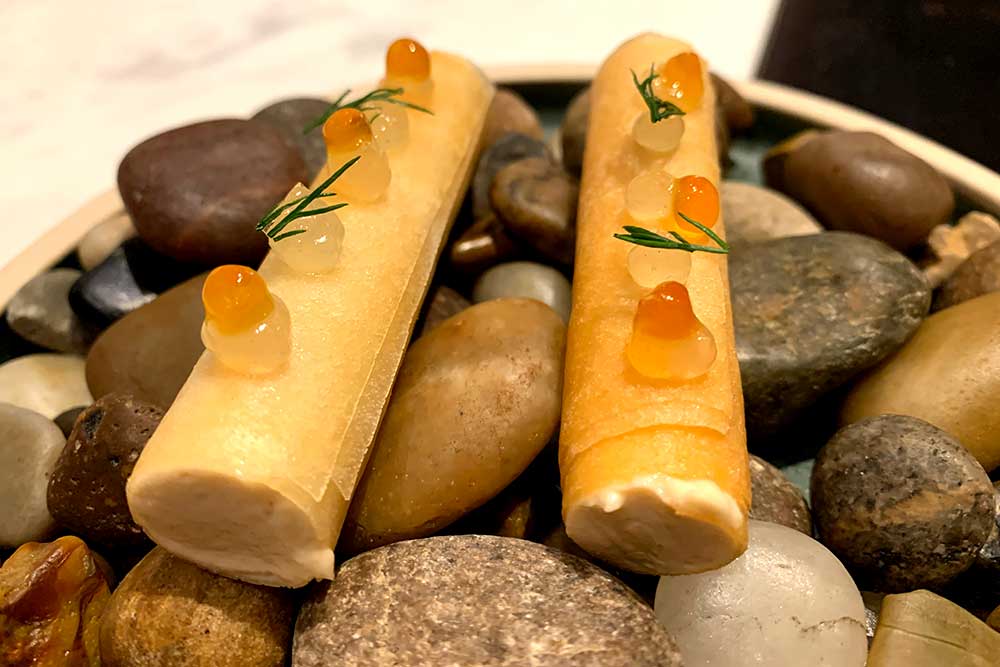 Making it "Seven by Nico" there is also extra optional snacks. As well as sourdough with either shellfish or seaweed butter, there is also this excellent filo cannelloni with keta caviar. Good snacks for sure - but there's a lot of food to come, so you may not need these.

Right in the heart of Fitzrovia on Charlotte Street. It's taken over one of the Zizzi sites, so it's actually quite spacious inside - which is handy in today's socially distanced climate. There's a long open kitchen that stretches almost one side of the restaurant. The restaurant has a small terrace space too, but on an oppressively warm London lunchtime, we enjoyed the cool embrace of air conditioning.

What COVID measures are they taking?

The tables are nicely spaced apart, there's sanitiser on the way in and all the staff are wearing some rather smart Six by Nico branded face masks.

So - this six-course menu - what's the theme to the first menu?

Apparently, whenever he opens a restaurant - the first menu is always "The Chippie" - his own interpretation of a fish and chip shop, and that's what we had. This one is actually "Chippie 2.0" and it's on at all the reopening restaurants across the country, getting them back into the swing of things. 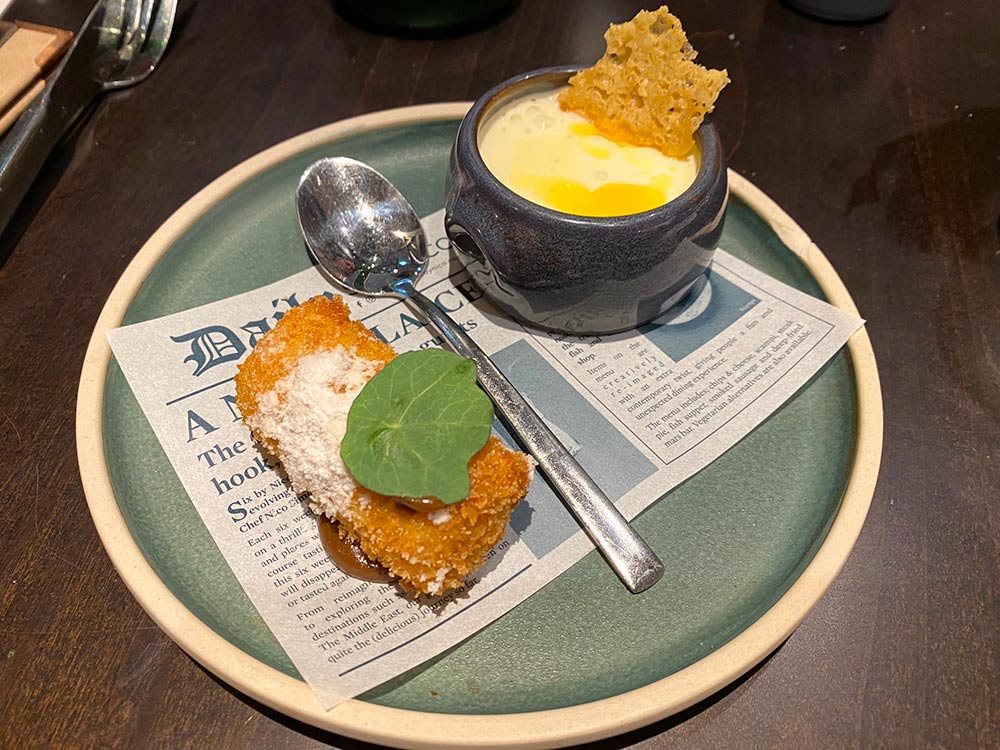 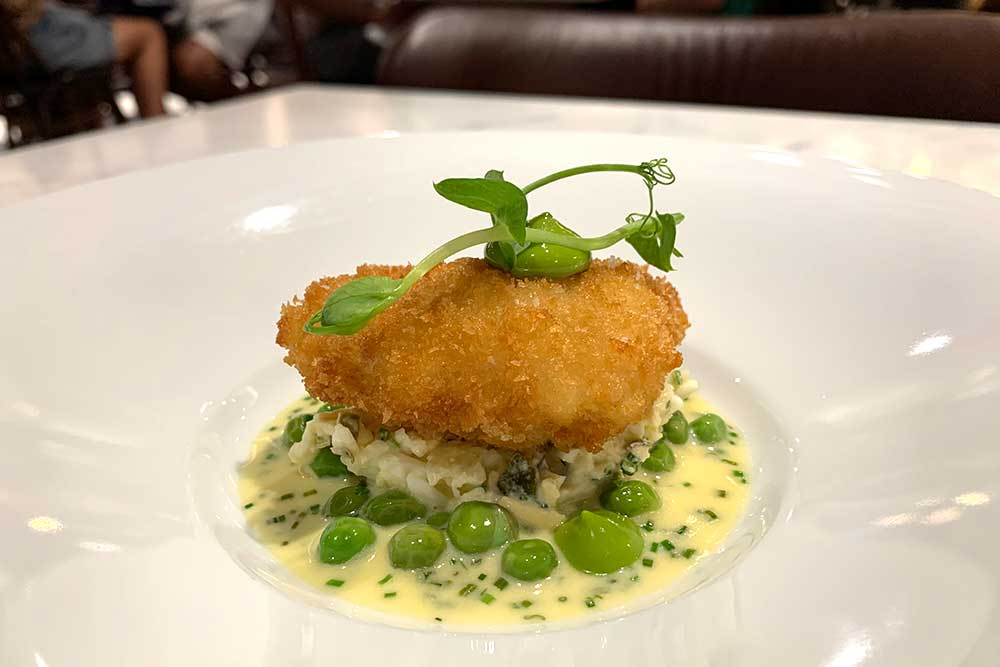 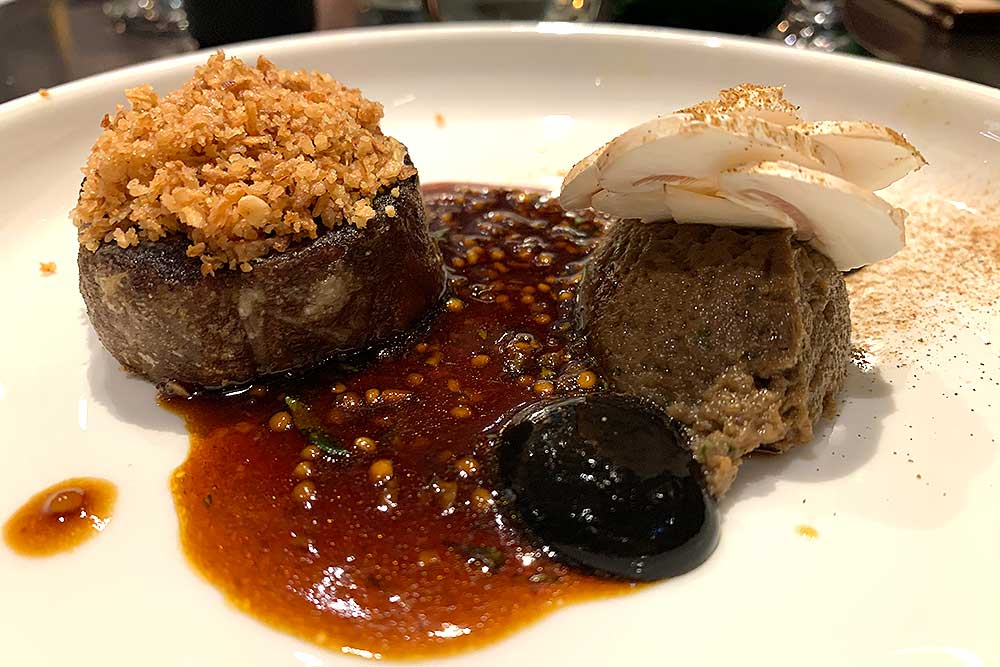 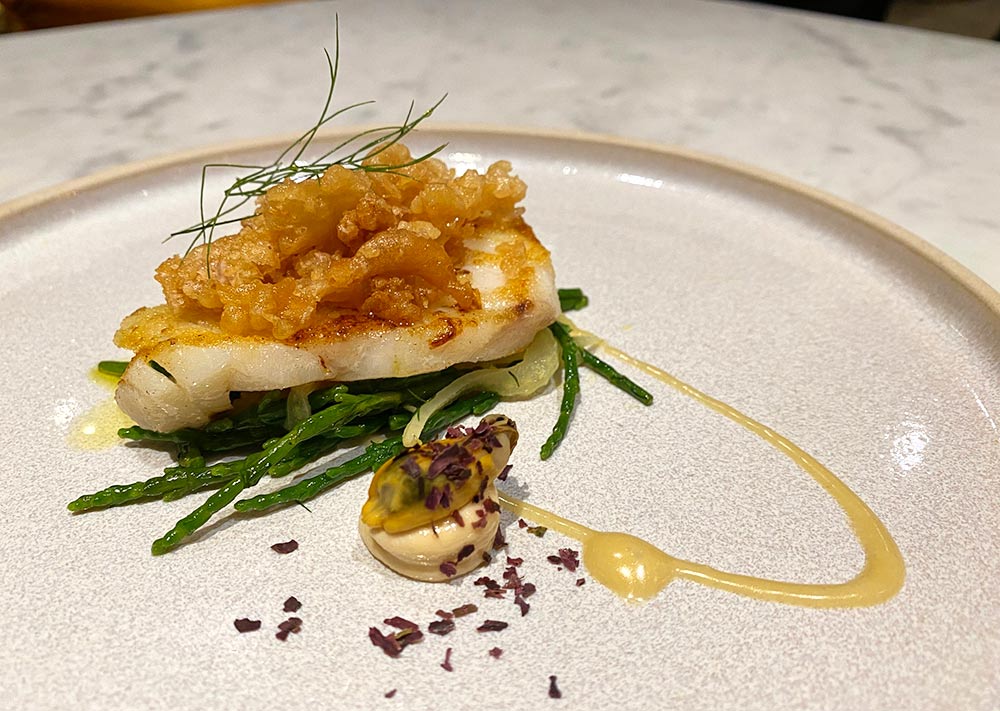 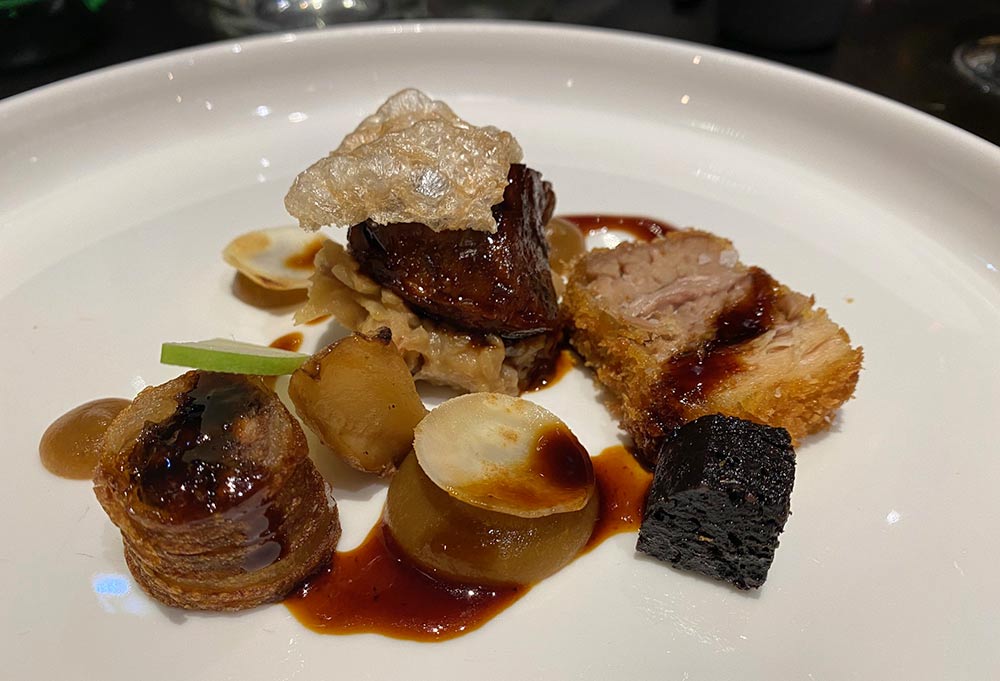 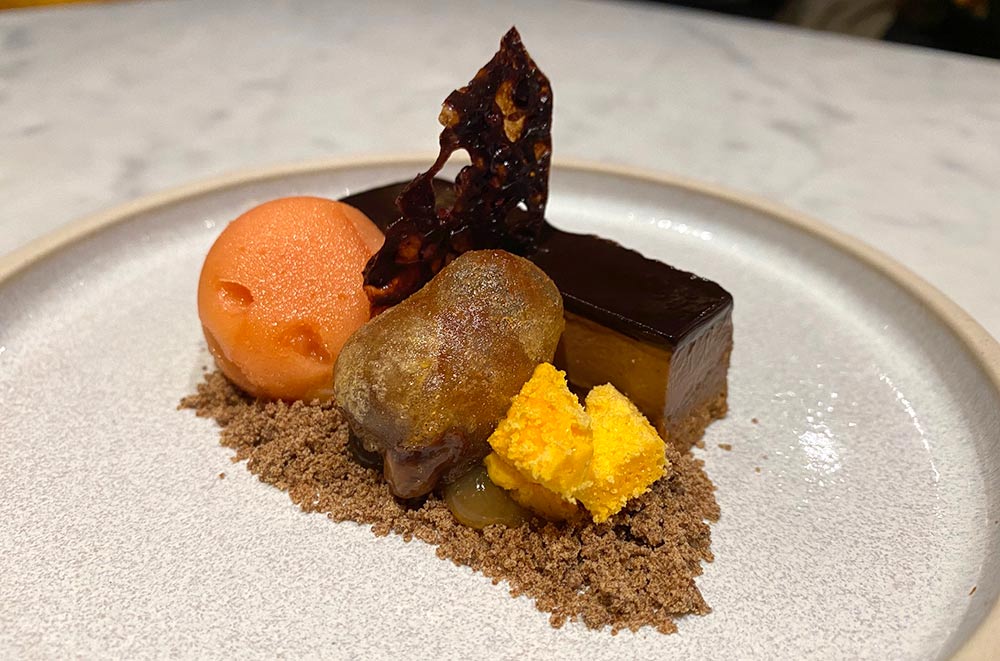 Deep-Fried Mars Bar - Chocolate Cremaux / Blood Orange Sorbet / Cocoa Nib - only one element of this dessert is actually the deep fried Mars Bar in question (that fritter in the middle), but the rest of the elements are clever riffs off that.

There is a separate vegetarian menu (and snack) - so there's a veggie variant for each course. The croquette is a salt and vinegar potato croquette, the "steak pie" becomes a "root vegetable pie" and there's halloumi instead of the fish supper course. So vegetarians are well catered for.

There is an optional wine pairing at an extra £35 and we thought this was a good deal. Very generous and, most importantly, the pairing was always delivered before the food. We've been to many restaurants that are much pricier than Six by Nico where this hasn't been managed, so that's a big win, frankly. Note that the pairing doesn't start until the second course, though. That might be because they want to point you to another extra - the aperitif (see below).

Outside of the pairing, there's a page of G&Ts (£9-10) and wines start at the £20 a bottle mark for a South African Chenin. Most of the wines are below £40, so again it's an affordable selection. 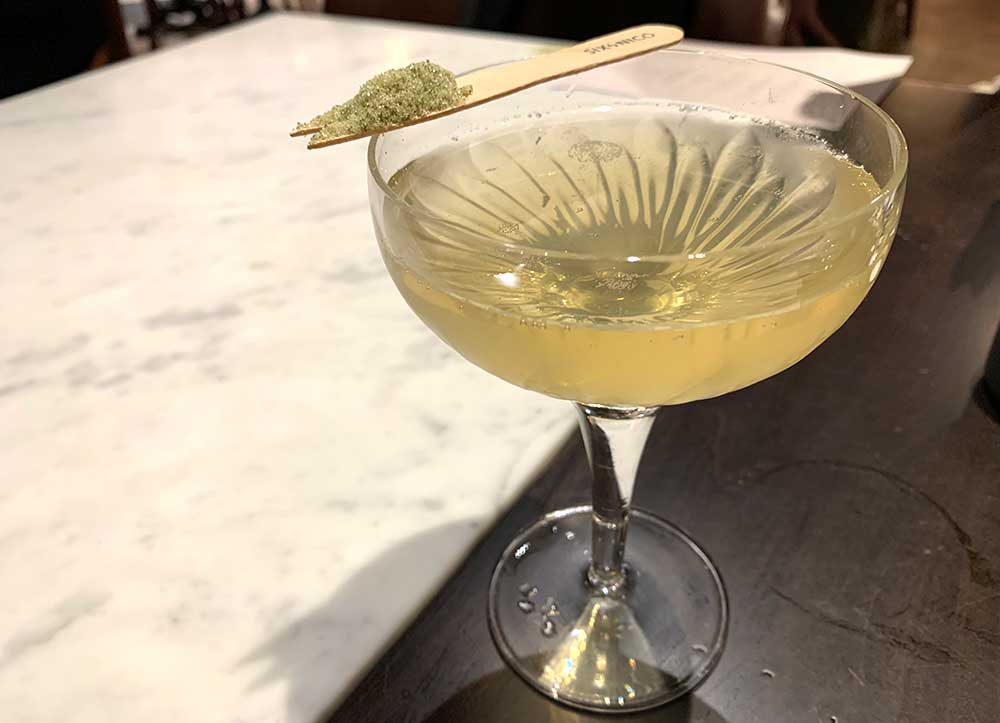 The "Seaside" aperitif - with sherbet "sand" that you pour in for some more fizz. (Note - your writer had to have two goes at that after pouring the first lot of sand on the table. Whoops).

Although established elsewhere, we do think Six by Nico is bringing something new to London - taking the tasting menu into a casual setting. Yes, this has been done in East London, but never to as broad a crowd as this, right in the centre of town.

The large restaurant was full on a Friday afternoon (so it wasn't an "Eat Out" day) and we think it'll attract people who would never dream of ordering a tasting menu. The food is good - while not quite crossing into "great" territory - but for the price, it's extremely good value, with generous portions. Not to mention, every six weeks, the menu changes to encourage repeat visits. All that and the staff were extremely on point - knowledgable and helpful throughout.

This clearly has hit written all over it.

More about Six by Nico