[SIGPLUS_EXCEPTION_SOURCE] Image source is expected to be a full URL or a path relative to the image base folder specified in the back-end but /blog/2013/longroom/gallery is neither a URL nor a relative path to an existing file or folder.
0
Shares

Salt beef, cheese toasties and craft beer at the Longroom at Smithfields 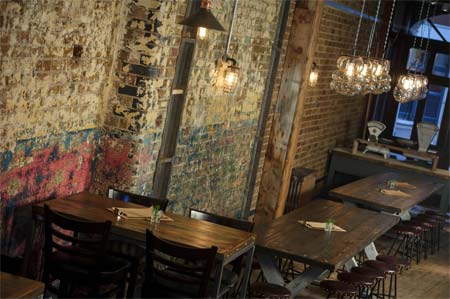 What can you tell me about the Longroom

It's a new pub just off Smithfield, with a focus on craft beers and cheesy, salt beefy snacks.

It's at the increasingly busy end of St. John Street, right near St John itself, Burger & Lobster, Polpo and across the road from the original Vinoteca.

Much like other areas of Smithfield and Farringdon, the clientele can change significantly throughout the night. So, earlier on there's a busy, loud city crowd, but this shifts around 8.30-9pm to a slightly quieter, crowd. If you're after a quieter drink, definitely head there around this time. If you like a loud, buzzy place, go earlier.

And what food is on offer?

Rather than doing a lot of things only mildly well, the Longroom focuses on two specific foods, both which serve to soak up the impressive selection of beer on offer. First up is the salt beef which you can get in sarnie form but works much better as a platter containing  a huge slab of salt beef served with Longroom pickles, cheese, mustard and plenty of decent bread from Gail's bakery (£14). It's a perfect sharing dish for a crowd of hungry drinkers and one we'd happily go back for. We're not the only ones it seems - they're already getting through 100kg of beef each week.

Alongside the salt beef they also do rather fabulous cheese toasties, once again using the Gail's bread. These come in various combos, including a craft beer flavoured cheese rarebit (£6.50) or - one of our favourites - a "Lincolnshire Poacher Club" with serrano ham, tomato and avocado.

On top of this, there's a breakfast/brunch offering too, where the salt beef also puts in an appearance for a salt beef benedict (£7.50) or the Longroom brunch (salt beef, eggs, mushroom and tomato on sourdough also for £7.50).

Finally It's worth highlighting the incredibly sweet salted caramel and chocolate tart and beer ice cream (made on the premises). The latter in particular we'd have happily ordered a carton of to take home.

There's a welcoming focus on craft beers at the Longroom, with an impressive selection available by both tap and bottle. It's well worth exploring the various beers on offer and we were particularly pleased to see our personal favourites Brewdog, Kernel, Goose Island, Brooklyn and many more represented. A short wine list ranges from £16 to £29 a bottle, and is a pretty affordable, interesting list featuring Chapel Down, Charles Smith Kung Fu Girl Riesling and Bisol Prosecco among others.

There are plenty of great cocktail and wine bars in this part of town, but it's been slim pickings for decent pubs. So it's very pleasing to find one that we'd happily return to for both drink and food. The large selection of beers, very moreish snacks and particularly the fine salt beef led to a highly enjoyable evening. And the team here have turned an unprepossessing room into a really nice, pared back space.

The Longroom seem very keen to bring something new to the area and we think they've achieved that so far - and they have plenty of ambition too (we really hope they follow through with the idea of craft beer ice cream floats for the summer). So in short, we'd go back and we reckon it's worth you making a detour here too.

Find out more about the Longroom

Prices were correct at time of writing. Hot Dinners were invited to eat at The Longroom.