[SIGPLUS_EXCEPTION_SOURCE] Image source is expected to be a full URL or a path relative to the image base folder specified in the back-end but /blog/2012/marivanna/gallery is neither a URL nor a relative path to an existing file or folder.
0
Shares 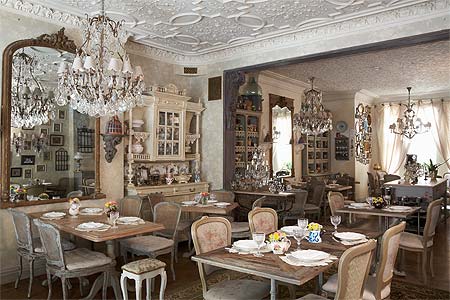 What can you tell me about Mari Vanna?

This is the first Mari Vanna restaurant to open in the UK - there are other branches in St Petersburg, Moscow and New York. The upmarket chain began in a private apartment in St P and takes its name from the heroine of a Russian folk tale - the legendary Mari Vanna who looked after weary travellers, giving them a hot meal and a place to rest.

A hop, skip and a Jimmy Choo shuffle from One Hyde Park and mere minutes from Knightsbridge tube - it's the perfect spot for homesick Russian oligarchs and their families.

We went to the launch of the new Chase Terrace Bar at Harvey Nichols Fifth Floor before coming which is only a five minute walk away - so that's worth a visit if the weather's clement. Otherwise, head for Bar Boulud which is always a welcoming spot for a decent glass of wine.

The restaurant's split into two rooms, the downstairs doubles up as a bar/club so you're definitely better off upstairs. As to where, well every table's got its own view of the goggle-eyed decor. Mari Vanna is the polar design opposite to modern minimalist restaurants. Here it's death by doily with no surface we could spot left unadorned by china statuettes or other knick-knacks.

The effect is like visiting some sort of mad great aunt's home - marginally offset by the casual t-shirts and jeans uniform of the waiting staff.

It's served up with herby garlic butter - our waitress couldn't tell us exactly what was in that - but the rye bread was dense and very fresh.

The a-la carte here is the menu equivalent of a Tolstoy novel - it took us ages to work out what to have, either because dishes sounded so good or we hadn't the faintest idea what they'd be like. While we tried to decide, we followed the lead of the tables packed with Russians around us and ordered some flavoured vodka. We sipped ours like weedy westerners while all around us, it was being dashed back with abandon.

Being total pigs, we tried three starters - courgette pancakes with very lightly smoked salmon and sour cream which were a treat - but easily enough for two people; we also had a selection of three pirogi - a sort of sweet pastry cornish pasty filled variously with sea bass, beef and pork and cabbage and some rather lovely cod liver mousse - a liquidy taramasalata-style dip served with hot toast.

Our main courses were beef strogonoff and pelmeni. The strogonoff was top notch - a much gutsier dish than we've been used to, served with buckwheat rather than rice. But sadly we've had better pelmeni at Bob Bob Ricard - the ones at Mari Vanna had been cooked for too long.

We were almost too full for dessert, but thank god we did go that extra mile because our honey cake - which looked for the world like something from a 1970s tea room was absolutely bloody brilliant. Light - despite being the size of a small brick - and filled with cream and honey and served up with a smear of honeycomb on the plate. Unexpectedly delicious.

The wine's not really the point here as proven by the sweet-natured sommelier who utterly straight-faced asked us if we'd ever had Pinot Grigio before. In the end we opted for a Georgian red which was perfectly nice, pretty pricey and not particularly exciting.

You'd have to be a rather po-faced sort of person not to enjoy Mari Vanna. It's one of those utterly barking restaurants where the food actually does live up to (even if it can't hope to outdo) the surroundings. And it's not often we recommend checking out the loos in a restaurant, but the ones at Mari Vanna have to be seen to be believed.

It's certainly pricey - but that didn't deter it filling up with large tables of Russian friends and families. If you're looking for a place for a first date - or even somewhere to recover from a break-up - this big-hearted Russian spot would be a good place to start.

Find out more about Mari Vanna

Hot Dinners were invited to eat at Mari Vanna.  Prices were correct at time of writing.