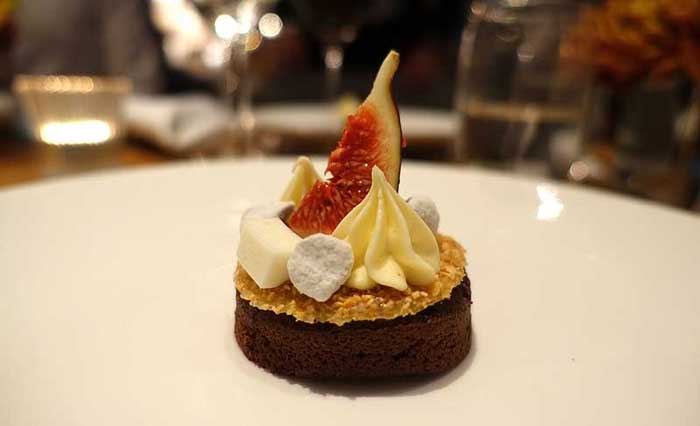 Hot Dinners popped along to Oxford Street last night to one of a series of dinners being held at Selfridges for the store's Meet the Makers series.

Last night was the first of a two night stint by National Chef of the Year Russell Bateman of Colette's restaurant at The Grove. Bateman was introduced by his former boss Daniel Clifford from Midsummer House in Cambridge and Alyn Williams while Clare Smyth from Restaurant Gordon Ramsay turned up after the dinner to talk about the National Chef of the Year competition, which frankly sounded terrifying. After all, how would you feel about Marcus Wareing hovering at your shoulder when you were trying to brunoise shallots?

Tonight, Bateman will have Phil Howard from the Square and Alyn Williams from his eponymous restaurant at the Westbury hotel to kick off proceedings. You can see a gallery of what we enjoyed below - and frankly, the £90 tab which included a welcome glass of champagne and a range of extraordinary matched wines was a bargain for the food we ate. Bateman's six course menu featured three of the dishes that won him the trophy last year. Our favourite? An amazing course of Roasted veal sweetbreads dusted with garam masala and served up with black garlic and girolles.

Find out more about Selfridges' Meet the Makers campaign on their website.