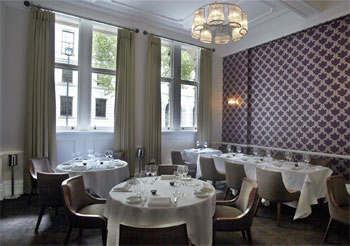 Michel Roux Jnr’s new place just opposite the House of Commons has polarised the critics.  The first wave decried it for being too old-fashioned, too staid while the latter reviews mainly heralded it for its unabashed traditionalist approach to fine French food. Having been invited to try dinner there, Hot Dinners can see a little of both sides – but on balance we’re coming down on the side of those who enjoyed it.

Situated just off Parliament Square, we were first invited to take a drink in the upstairs bar – a bright, airy room that’ll apparently be serving light snacks at lunchtime. Here we tried the Albert Roux Blanc de Blanc champagne, a seriously toasty tipple which was served with a selection of olives.

Having looked at both the tasting and a-la-carte menus, we went for the a-la-carte mainly because we badly wanted to try several dishes on there, which didn’t feature on the tasting menu.

To start we had confit of salmon with dressed crab, samphire and nasturtium leaves. The salmon was meltingly soft, but the crab wasn’t particularly exciting. The langoustine with Jabugo ham and pea mousse lived up to expectations – so much so that only one half of the team got to try this – the person who ordered it, simply refused to share.

For mains one of us had fillet of veal with sweetbread and wild garlic – an utter revelation as neither of us had braved sweetbreads before – we must have been mad, as this was perfect. The other enjoyed roast best end of Launceston lamb with jersey Royals, violet artichoke and a tongue salad.

Where is it?
RICS, Parliament Square, London SW1P 3AD

Suitable for?
Politicians, lobbyists, parents up to town for the weekend.

What should I order?
As long as you start with the house champagne, all will be well.

Before desserts arrived, there was one final unexpected flourish – a strawberry pannacotta with a strawberry sorbet, served with a slice of meringue. That didn’t stop us ordering dessert – a jasmine tea-scented custard, caramalised brioche and earl grey syrup which was as good as its description and the passionfruit soufflé – a truly resplendent dessert which came all tall and wobbly and about the size of our head.

We both had a separate list of wines by the glass matched to each course by the assistant sommelier - Simone Sylvestre - who trained at the Waterside Inn. Given our huge difference in wine tastes (one of us prefers fruity German and New World, the other goes for bone-dry French whites) she did a brilliant job. Standouts included the A-Z Oregon Pinot Noir with the veal and Muscat de Riversaltes with the soufflé.

Looking at other reviews which complained about sometimes overbearing service, we can only say this was far from a problem for us. This is a grown-up’s restaurant with service to match – and we enjoyed it. Fair enough, the dining room was a little on the quiet side. We’re sure it’s probably busier here at lunchtime – and it’s bound to become a Westminster favourite as all the new MPs settle into their positions, and dare to set food outside the House for lunch.