Recreating history: the Escoffier menu at the Savoy 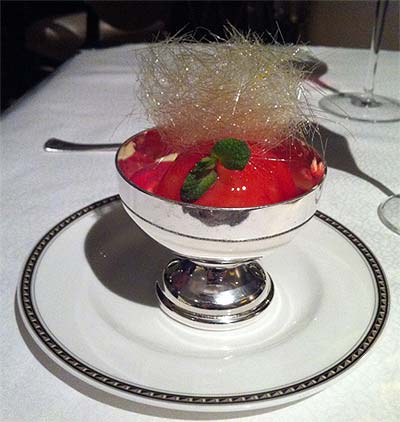 Ever since it reopened its doors after 36 months and £220 million of refurbishment, the Savoy has been busy pushing its future, whilst never losing sight of its heritage. The American bar, for example. has been sensitively given a gentle push into the 21st century but still retaining all of its original allure.

Hot Dinners popped in just before Christmas to try out the River Restaurant where a new chef, James Pare, has been inspired by the work of a venerable old chef, Auguste Escoffier to come up with a special tasting menu.

Escoffier, the father of modern French cuisine, spent seven years working at the Savoy in the late nineteeth century. Although he was eventually dismissed from the hotel, along with César Ritz, over an issue involving backhanders and missing booze, he did create some world-class dishes during his time here, including Peach Melba which he came up with to celebrate Dame Nellie Melba's stay at the hotel.

Over a hundred years later you can now try some of Escoffier's dishes in a special tasting menu devised by Pare who's clearly been busy poring over Escoffier's old cookbooks.

Our dinner kicked off with a rather fine quail consomme - clear and intensely meaty with slivers of quail meat and a quails egg. It was the just the kind of dish to cosset a modern-day invalid with (and that's a good thing by the way). That was followed by Sole Victoria - a lovely piece of sole with large chunks of lobster, generously topped with truffle shavings. Next was lamb noisettes rolled in 'herbes fines' which was, as you'd expect, tender and served up beautifully pink. We opted out of the cheese course which came next (we want to be able to see our feet at some point in 2012) which meant we were better able to appreciate the pretty silver dish of peach melba that arrived next, topped up with a heap of spun sugar.

If you can, it's lovely sitting out in the conservatory part of this restaurant which gives you a partial (but still stunning) view over the Thames. We weren't that keen on the wine matching side of the menu, but that was more than offset by the lovely pre-dinner drinks we had in the hotel's stunning new Beaufort bar where the barman kindly rustled us up a great, off-menu, Twinkle.

Our verdict? A great place to come for a special event - a noteworthy birthday or anniversary.

Hot Dinners were invited to eat at the River Room. The Escoffier menu costs £62.50. Prices are correct at time of writing.