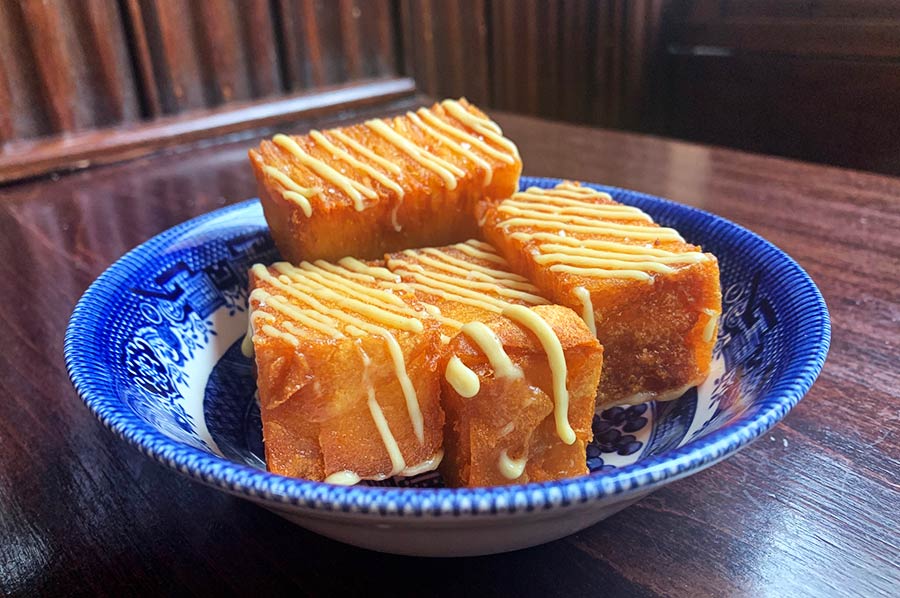 The famed confit potatoes - we've bought these many a time from the deli but they're always just that bit more glorious served in the restaurant.

We see a lot of the Quality Chop House on Instagram, but why exactly is it so popular?

It's a potent mixture of the history of the place (the restaurant is celebrating its 150th birthday this year) and the work of the current owners and chef.

It certainly is. Ever since first opening its doors in 1869, there's been a restaurant on this site. English Heritage, which made it a Grade II listed frontage in the late 80s describes it as a "unique example of early 20th Century working class restaurant". And it proclaims those credentials on the front with the immortal words 'Progressive working-class caterer' etched on the windows. During the eighties was probably when it first came to the notice of London's foodie crowd. It was then given a gentle makeover and with a new chef in the kitchen, Michael Soutar, who'd trained under the iconic chef Nico Ladenis at his three Michelin-starred restaurant Chez Nico.

That said, it hasn't all been plain sailing. The restaurant has had its up and downs, the downs notably being closing completely in 2010 and being turned, mercifully briefly, into a meatball restaurant in 2011. But things have turned considerably for the better with its latest owners. 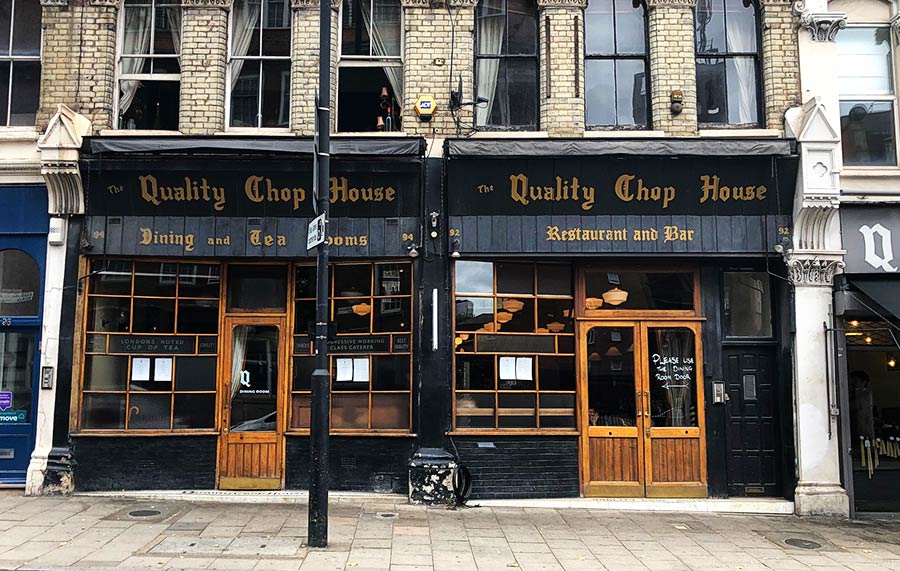 Who's in charge now?

Will Lander (son of foodie couple Nicholas Lander and Jancis Robinson) and Daniel Morgenthau took over the restaurant in 2012 and since then it's been nothing but good news. They had the genius idea of bringing in chef Shaun Searley from Bistroteque and the place has stayed on most critics' best restaurants in London lists since then. They've since added a butcher, deli and wine bar next door.

Is it all olde worlde inside too?

Yes and no. The main dining room is certainly the most historic looking part of the restaurant as it featuresboth the original booth tables and wooden pews. Thankfully recent years saw the restaurant bring in cushions for those pews which (from past experience) used to get pretty uncomfortable over long lunches. The second dining room alongside that is more light and airy with a brasserie look and feel. There's also an always-popular feasting room upstairs for private dining. 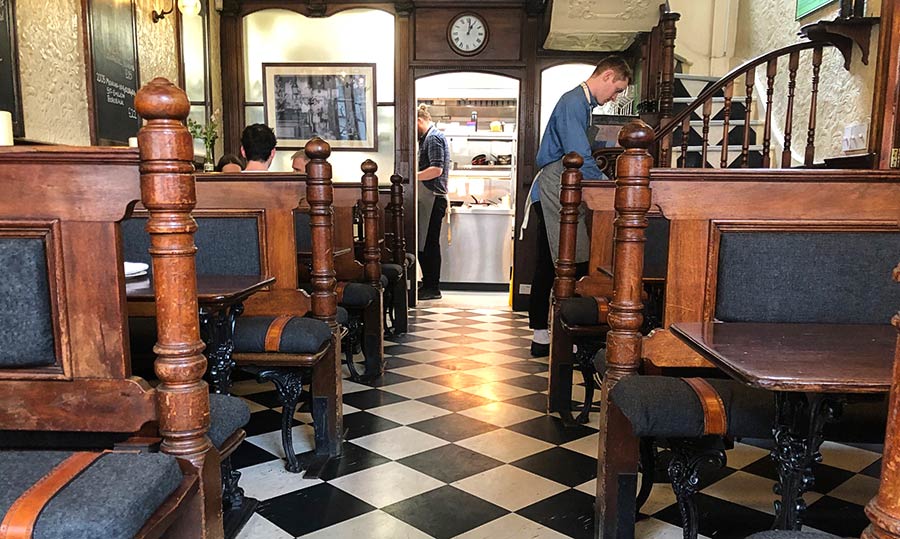 The main dining room complete with original features (and no - we're not talking about the front of house staff).

You'll find it towards the top of Farringdon Road by Mount Pleasant. The nearest tube is Farringdon.

So why are you writing it about it now?

We've been fans of the restaurant since we worked in Farringdon when we first arrived in London. But the reason to write about it now is this summer's arrival of what can only be described as London's greatest restaurant set menu. Quality Chop House's 150th anniversary menu features QCH classics through the ages, reinterpreted by head chef Shaun Searley. They're calling it a four-course menu, but when one of those courses features no fewer than four snacks, it's really much more generous than that.

The menu is £45 and here's how it all goes down (including the amazing confit potatoes you see at the top of the page). Oh, and it starts with a glass of Moet & Chandon Brut Imperial. 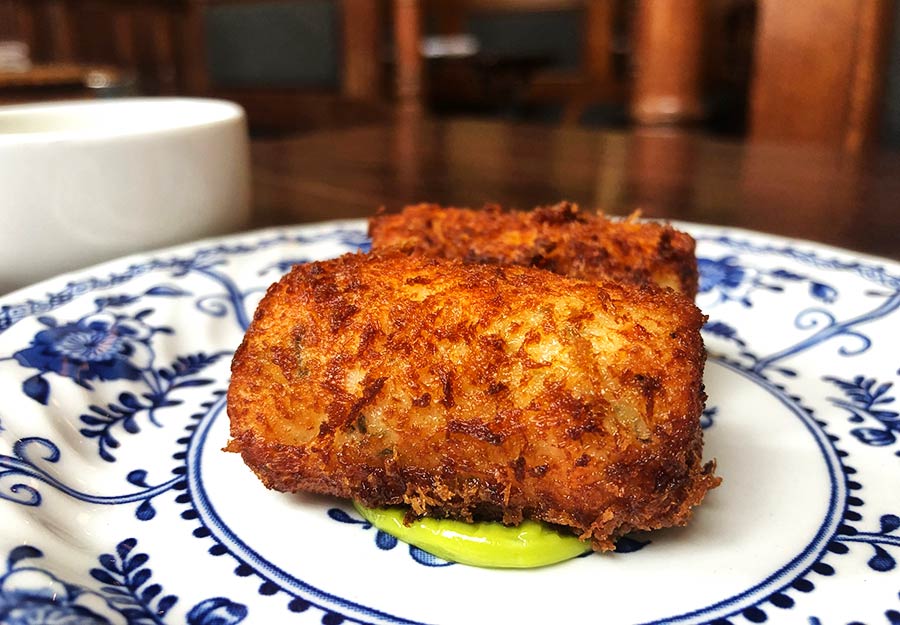 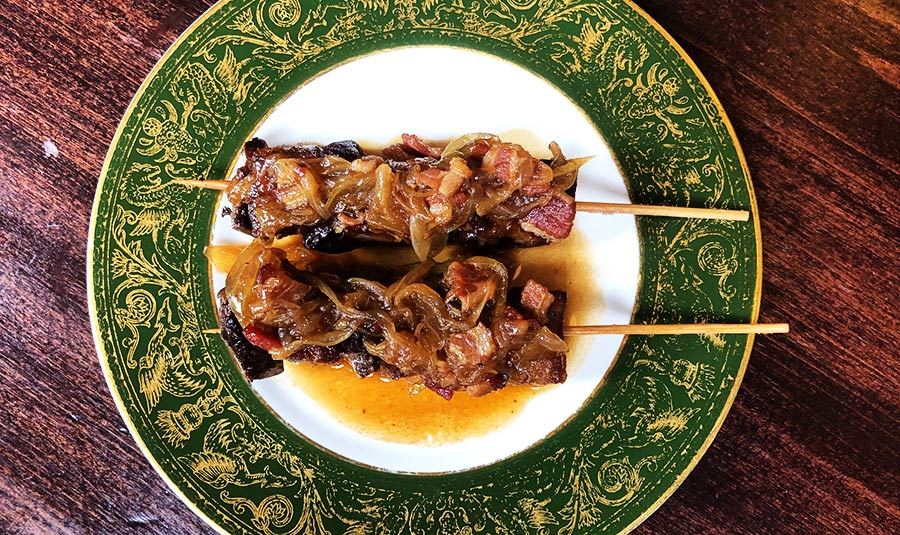 Lamb skewer with fried onions and bacon - possibly the best iteration of lambs liver and bacon you're likely to try. 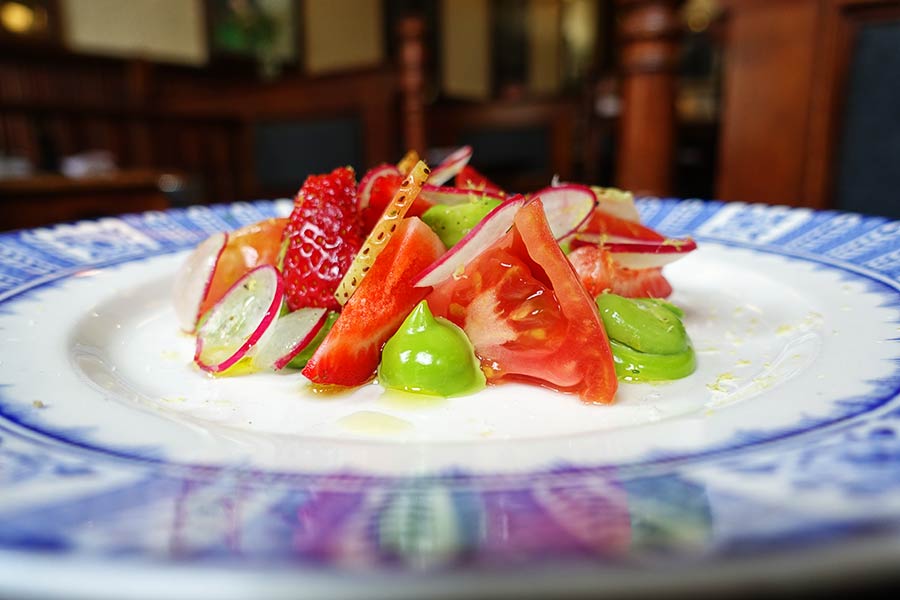 Tomatoes with strawberries, radishes and broad beans - the English summer harvest on a plate. 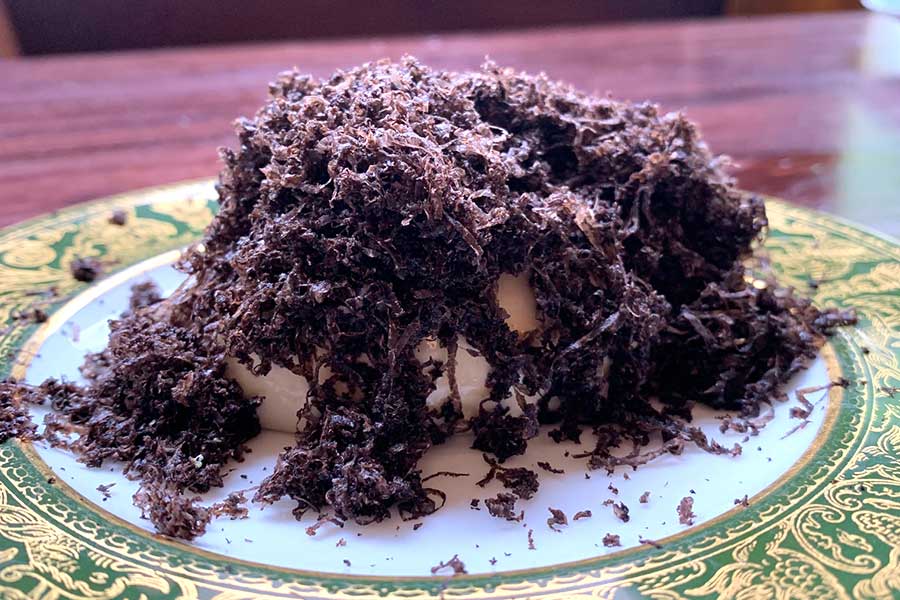 Beef fat brioche with duck liver parfait and black truffles - yes, under that mound of truffles is some ultra smooth parfait (the thick slab of "be still my just-beating heart" brioche is out of shot). 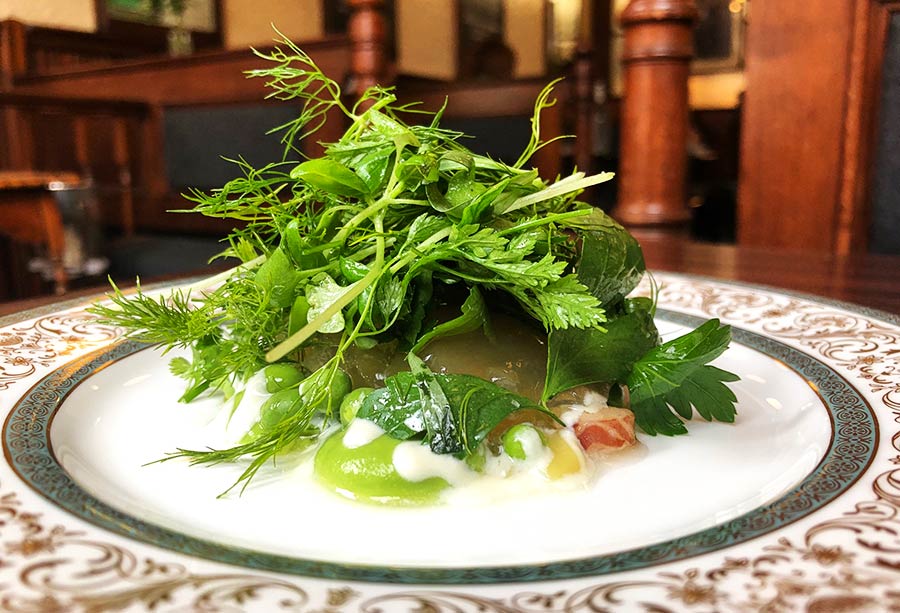 Peas, jellied eel, buttermilk, herb salad and ricotta - we're pretty sure this isn't what jellied eel looked like in days gone by. Lucky us. 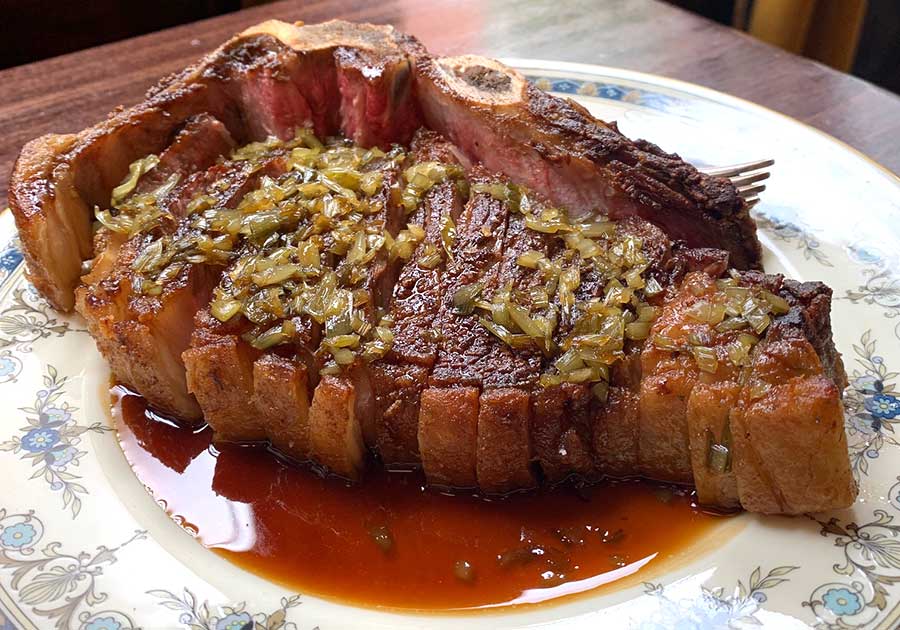 Highland beef with the most amazing fermented ramson sauce to make you wish you'd been more inventive with any wild garlic you came across when it was in season. 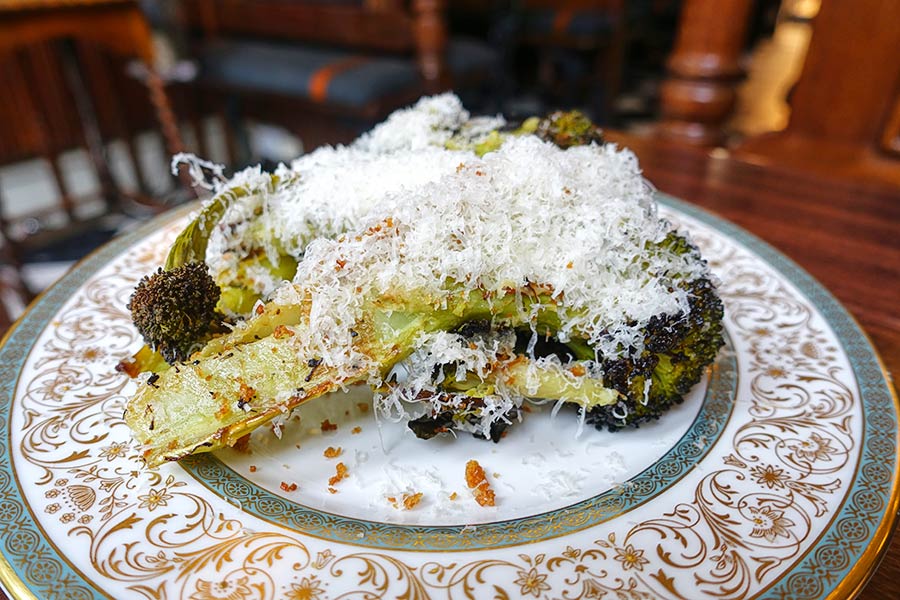 Broccoli, with dripping breadcrumbs and Parmesan - if there's a better way to ensure everyone ate their greens we'd like to know about it 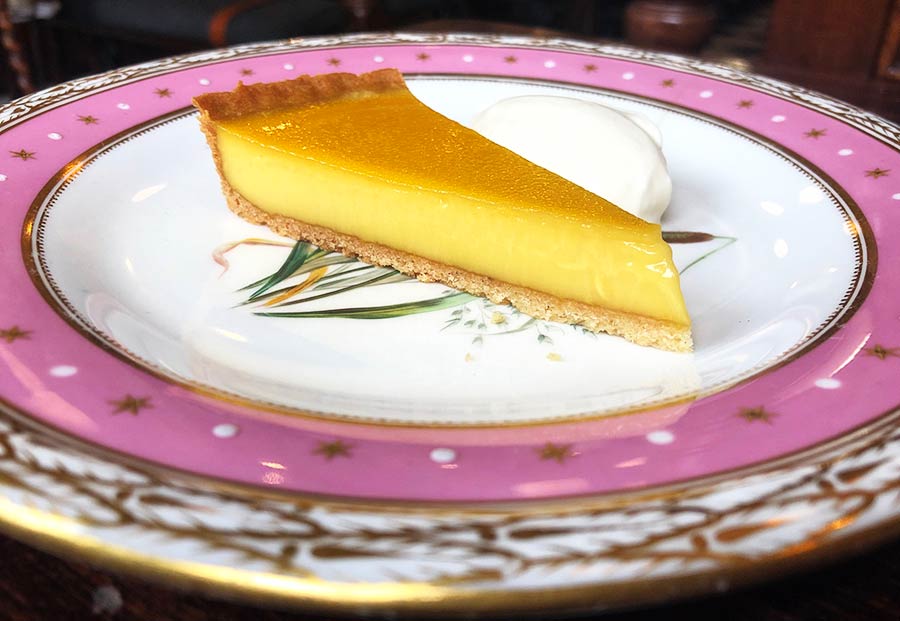 And what if I fancy something else for lunch?

It's well worth looking at the set lunch menu too. That's only two courses for £22, three for £26 (at the time of writing). That features some of QCH's contemporary hits, including their "Belted Galloway mince beef on toast) and you can get confit potatoes and more snacks as extra. It's an excellent menu and well worth heading along for if you miss out on the 150th celebrations.

And if I want to take something home?

If you're there for lunch, then a visit to the deli next door is mandatory. As well as the best pork pies in London (in our opinion), there are amazing sausage rolls, wonderful smoked cod's roe and you can buy the confit potatoes to take and cook at home. It's a wine bar too, so you can also pop in here for wine and small plates. All that and it's a butcher too. We visit this deli all the time - those pork pies are tremendously addictive. But we've just scratched at the surface of what it offers - head along and you'll find many delights there.

If you haven't been here yet, (and honestly - WHY NOT?) then the anniversary menu is the perfect introduction to what Lander, Morgenthau, Searley and the team here at QCH are all about. If you're a longstanding fan, then this greatest hits menu with a few new additions will be everything you already love and more. At just £45 it is - genuinely - unmissable.

More about The Quality Chop House