[SIGPLUS_EXCEPTION_SOURCE] Image source is expected to be a full URL or a path relative to the image base folder specified in the back-end but /blog/2013/fishandchip/gallery is neither a URL nor a relative path to an existing file or folder.
0
Shares 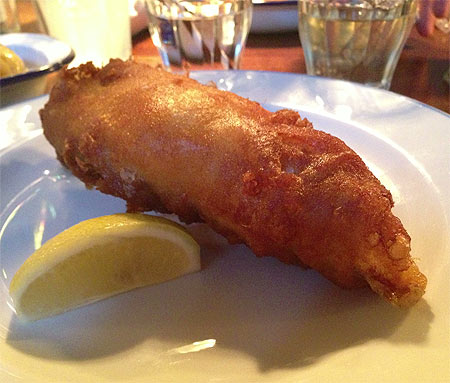 What can you tell us about The Fish & Chip Shop?

This new Fish & Chip restaurant (it's much more of a restaurant than a chippy - don't let the name fool you) is from ex-Caprice Holdings CEO Des McDonald. It's the first restaurant to come out of his new company and there's alread talk of more on the way. There's definitely an air of his former place of work about this venture, with ex-Caprice chef Lee Bull as Executive Chef and Head Chef Steven Wilson (formerly Daphne's and Scott's) in the kitchen.

The restaurant is a mix of raw bar - at the front, restaurant - throughout and bar - right at the back, in front of the kitchen. It's a slightly odd layout, but it does help to prevent a crowd forming at the front of what is quite a small restaurant.

Food-wise, they're offering a selection of sustainable freshly-caught fish, a mix of butties and, luckily for this writer who lives around the corner, a takeaway service.

It's on Upper Street right next door to House of Wolf - so that's just a few minutes walk from Highbury and Islington station.

Thanks to Islington's recent food and drink resurgance, there are a lot of places nearby. There's the aforementioned House of Wolf next door if you fancy some fancy cocktails and Public House round the corner on Islington Park Street for the same. Alternatively, there's our favourite local pub the Compton Arms nearby on Compton Avenue if you're more in the mood for a traditional pub.

It's a small space - so pretty much wherever you can find a space. However we quite like the banquette tables for four at the back, as well as the counter dining along the raw bar at the front. And if you fancy just popping outside for a fag and a drink, there are chairs there too.

The menu is divided into several sections. So there are starters with options like a half pint of prawns (£8), half shell scallops (£4 each), oysters (£2.50 each or 6 for £12.75). In this section we went for the duck egg and asparagus on toast (£7.50) as well as the first must-have on the menu - the London particular fritters (£7.50) which are essentially ham hock and crushed pea croquettes and something we wish we'd ordered the larger portion of (£10.50).

The next section is for "butties" although these are not your normal chip shop butties. We decided to share the shrimp burger wuith spicy tartare (£11), a spicy winner in a perfect brioche bun - but there's also an enticing-sounding lobster and avocado buttie on too.

As for the main event - we strayed into two more areas of the menu. Firstly the "kitchen" section which offers more traditional dishes including fish curry (£13.50) or salt beef wallys and mustard (12.50). Knowing the origins of the owner and links to J Sheekey, we thought it best to go for the fish pie (£12.75), one that matched the central London version.

But the real winners came from main fish section of the menu. First off was the "Beavertown battered fish" (reflecting the beer also served in the restaurant that is used in the batter for the fish). The fish was among the freshest we've ever had - with the batter being thin and crispy, the kind you usually have to travel out of London to find. And next up was the scampi - which was some of the best scampi we've had to date - a revelation of what this fish dish should actually taste like.

Sides were small portions of thin cut chips - perhaps not what you'd expect from a normal chippie - but that was actually welcomed by our table - and mushy peas, which were crushed - but all the better for it.

If you can stretch to dessert - then there are fairly light versions available too - although that didn't stop us going for the burnt chocolate cream. There's also a children's menu available too - with a 1/4 pint of prawns, fish nugget butty or fish finger and chips and more for those of smaller appetites.

And how about the takeaway?

We haven't been yet - although will very soon - but takeaway is available by phoning in advance. It's a slimmed-down menu - mainly comprising of the fish and a few butties - but it's certainly a cheaper option if you live close and fancy a decent fish supper (it's definitely a better option than nearby Seafish in our opinion).

There's a very small wine list, which starts at £19 and goes up to £40. Glasses are of the small 125ml variety, so take note of that when ordering. Our main criticism came here as we think the wine needed to be chilled a wee bit more than it had (something of a bugbear of ours) and that it was pretty expensive for this part of town. Otherwise Beavertown and Brooklyn beer are available in bottles and Camden Hells on draft. There's a small cocktail list available too (around £8 each).

We were very happy when we heard that the Fish & Chip Shop was opening so locally, and were even more so when we discovered what a winner it was. We'll definitely be back - if we can get a table - at the very least making much use of its takeaway service in the coming months.

Prices were correct at time of writing. Hot Dinners were invited to eat at The Fish & Chip Shop.