Polpetto, Russell Norman's latest venture, lives up to the hype 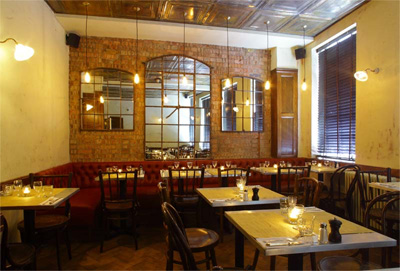 After last year's hugely successful launch of Polpo - the immediately popular Venetian bacarro by way of New York - there was almost immediate speculation on what restaurateur Russell Norman would come up with next. The answer eventually came that he was going to be opening Spuntino in Autumn, when suddenly Norman surprised everyone when he announced on Twitter that his third restaurant was on the way and would bizarrely open before his second.

It turns out he was offered the chance to take over the dining room above the French House in Soho - an offer he couldn't refuse - which would be a more direct spin off of Polpo than Spuntino is intended to be. Some of the menu from Polpo would find its way over to the new venture and it would continue the Polpo tradition of not taking bookings in the evening.

Hot Dinners was invited to try out Polpetto and having previously fallen in love with its elder sibling, we were heartily looking forward to our lunchtime visit.  The first thing that strikes you when entering the restaurant is that it's absolutely tiny.  Seating only 28, it's a much more intimate affair than Polpo and is in many ways better for it. And unlike Polpo, instead of squishing round the bar waiting for your table, you can pop downstairs to the French House and wait to be called. We were sat at one of the window tables - a table we would heartily recommend grabbing if you can - allowing us to watch Soho strolling by as we tucked into our food.

As with Polpo, the menu is split into a number of different types - from small cicheti to get you going to more traditional meat and fish courses.  We kicked things off with duck and porcini meatballs and some excellent chopped liver crostino that had been a huge favourite of ours at Polpo.  And one of us also tried the titular Polpetti - the tiny octopi that Polpetto gets its name from.  In our opinion, only the meatball let the side down, being a pretty standard meatball with no discernible taste of porcini.

Suitable for?
Fans of Polpo, those willing to wait for a table, foodies, dates.

What should I order?
Try the polpetti if you're feeling adventurous - but the steak with truffle cream and the lentils with burrata get our approval.

But that was a tiny hiccup - the rest of our meal was a triumph. We loved the huge crispy soft shelled crab with parmesan served on a fennel salad which cut through the richness of the crab, while the earthy wafts of the grilled sliced flank steak with white truffle cream had us from the moment we smelt it going past to another diner. Luckily for us, chef Tom Oldroyd had just put a new dish on the menu - a warm lentil salad with burrata - which was indisputably the star of the show and left us wondering why-oh-why we can never get lentils to taste that good. (Tom - we want the recipe!)

We also managed to squeeze in a few small but perfectly formed desserts - the Lemon and Strawberry sgroppino (sorbet served with Prosecco) and pannacotta with blackberries.

As this was lunch - we were pretty restrained on the drink front - a decision helped by the miniscule size of the wine glasses - but the Prosecco we tried was fresh and perfect for this kind of food.

Polpo and Polpetto have both been accused of being a little too trendy for some tastes - but we feel that's missing the point. Hot Dinners has often wished that the London restaurant scene would learn from its Manhattan counterparts and Norman's one of few people trying to achieve that. We briefly talked to him about the plans for the upcoming Spuntino and if he pulls them off, he'll easily continue his run of highly successful restaurants.

You've probably deduced from this that we loved Polpetto. The atmosphere was perfect for a buzzy Soho lunch or a more intimate dinner a deux. It's taken the best from Polpo and added instant new classics to the menu.  Highly recommended.