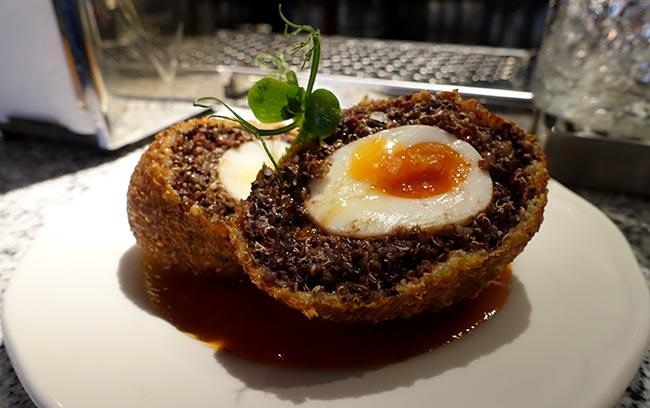 What do you need to know about Ceviche?

Ceviche is a Peruvian restaurant that's been set up by Martin Morales, who is one of the key people promoting Peruvian cuisine in London. It's his third restaurant and the second Ceviche, but this one is much larger than both the original and his other restaurant, Andina in Shoreditch. It's best explained as casual Peruvian eating and drinking, but there's more to it than that.

It's on City Road, a couple of minutes from Old Street Tube station. The whole area is being redeveloped at the moment, so expect more food openings around here soon.

Where should you go for a drink before/after?

In the immediate area, there are a few decent options. Almost across the road is Nightjar, often listed as one of London's best bars and if you're after a pre/post cocktail it should definitely be on your list. There's also Tonic And Remedy at the new M by Montcalm and the Three Crowns is extremely highly rated too.

And if I want a pre-dinner drink at Ceviche?

There's a large bar space at Ceviche so it's perfect for popping in either before your meal or just if you fancy a pisco sour or three. There's a good snacks list to choose from if you don't want the full blown meal.

Where should you sit?

You can eat in the bar area if you want, but we'd recommend the main restaurant in front of the kitchen area - it's more buzzier in that section later in the evening.

What should you order?

It's primarily a small plates affair so as usual, order what you want when you want it - don't order all in one go as you may find your table overwhelmed. As for what we ordered, we'd certainly recommend:

Obviously the main thing to do it have a pisco sour - particularly if you're yet to try one - a very more-ish cocktail. And also worth trying is the Duncan's Pisco Punch (Pisco Italia, pineapple syrup, sweet vermouth, bitters) - that's made and pre-bottled on the premises and they sell it to take away too. You should try their own beer too - Somos Libres, brewed by Hammerton Brewery in Islington (and which we're told also has a Peruvian brewer!). More collaborations between Ceviche and Hammerton are on the cards.

There's a good sized South American wine list too - starting at £20 and while most of the bottles are under £35, you can splash out for a White Bones Catena Zapata Chardonnay at £118 if you're celebrating.

Ceviche is undoubtedly a good addition to an area of London that's going through some real improvements at the moment. It's well worth popping in whenever you're in this part of town for a drink and a prefect introduction to Peruvian food. As long as you don't get carried away with the pisco sours...

Hot Dinners were invited to Ceviche. Prices are correct at the time of writing.