[SIGPLUS_EXCEPTION_SOURCE] Image source is expected to be a full URL or a path relative to the image base folder specified in the back-end but /blog/2012/sonnys/gallery is neither a URL nor a relative path to an existing file or folder.
0
Shares 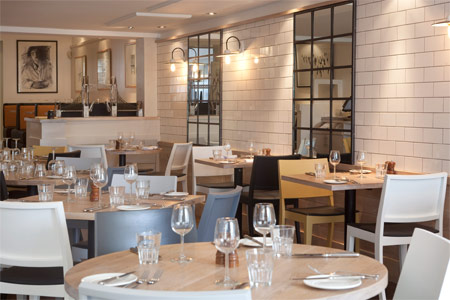 What can you tell me about Sonny’s Kitchen?

A familiar, but tired, landmark in Barnes has recently had a facelift, along with a tad more corrective surgery elsewhere, by dynamic duo restaurateur Rebecca Mascarenhas and chef Philip Howard. This pairing has already worked its magic with the likes of Kitchen W8, which earned its first Michelin star in 2011, and has been gaining a strong profile since. Picking up the challenge of putting Barnes ‘back on the culinary map’ will have been no mean feat, but given the glowing recommendations of Giles Coren in his recent review, it seems that they might just have pulled it off, in rather impressive style.

It’s located on Church Street in Barnes. Not the most convenient place to get to if you’re travelling in by train. It’s a good 20 minute walk from Barnes station, thankfully however we managed to time our journey perfectly in that we headed there, and back, during two of the breaks in the relentless downpour of rain over the past few weeks. Also, walking back to Barnes station, in the dark, is not something we would necessarily recommend as it’s a rather long, dimly lit road next to a large common area. It’s well worth asking the restaurant to order you a taxi to take you there, if you can.

Judging by the patrons there on the night it’s a favourite with the local, affluent set. Groups of well-manicured ladies hooted and gossiped over their salads and wine; family groups chatted away whilst the awkward looking teenage boy sunk ever lower into his chair to avoid the humiliation of being seen out with his parents, and the occasional couple had a quiet bite to eat together. In other words, it’s a relaxed place that would appeal to friends, families and couples alike.

Despite being smack-bang in the middle of Barnes village there didn’t appear to be an enormous choice available on the doorstep. Undoubtedly a local to the area would be able to deliver a handful of suggestions, however being unfamiliar with the area we could only spot The Red Lion pub located on the nearby corner. Heading in there for a quick aperitif wasn’t a wholly unpleasant experience, despite the landlord’s bold decision to paint the exterior a grim moss/swamp green, inside the interior was actually fairly decent.

The front of the restaurant is airy and smart and (certainly at the time Hot Dinners went) a lot quieter than the back area. There were more couples in the front of the restaurant, and groups tended to congregate in the back area which had a real buzz about it from around 8pm, with all tables being filled by around 9pm. The drawback to this however is that it did get rather warm in there, and we found ourselves stripping off layers of clothing to compensate.

No, bread is at a premium of £2.50, however it is worth it. Not only is it served in an attractive folded paper, origami-style, basket, but the bread itself is also delicious. The selection of white bloomer, raisin bread, rosemary bread and seasoned crostini was all of great quality.

If you’re a fois gras fan (and we do appreciate how controversial that may be to some) then you simply must order the potted Fois Gras with Camomile Jelly, Chutney and Homemade Sourdough Toast (£9.50). It is one of the best fois gras parfaits Hot Dinners has ever tasted. In fact it was so good that our companion, who had ordered the Salad Nicoise with Grilled Mackerel (£8.50) ploughed through that in record time, before diving in to help finish off the parfait. It was the smoothest, most ambrosial parfait, not too rich, not too strong….just perfect.

For main we had the Ravioli of Kid with a Vinaigrette of Golden Raisins, Pecorino, Walnut and Rocket (£12.50) and the Pesto Glazed Seabream with Piperade, Borlotti Beans, Semi-dried Tomatoes and Olive Oil (£15.00). Despite being keen to try the ravioli we were concerned that it could end up being a rather heavy dish, if it wasn’t done correctly. However, our Modena-born waiter gave it his recommendation, saying it was as good, if not better, than you could get anywhere in Italy. We were sold. The good news is that he wasn’t wrong. It was a very well-balanced dish with the pasta cooked to perfection. The Seabream was a real success also, the borlotti bean and tomato combination was utterly delicious, so sweet and a perfect partner to the soft delicate bream. Two real hits on the menu.

Unable to resist the dessert menu (as will you be), we opted for the Double Baked Bitter Chocolate Torte with Orange Mousse and Crème Fraiche, and the Lemon Posset with Strawberry Jelly and Elderflower Beignets. Both were absolutely delicious, the beignets being the stars of the show, and indeed, upon experimenting we found a combination of the posset and the chocolate torte combined worked very well together too.

The wine list has a lot to offer. We’d suggest starting off with a glass of the Prosecco (£6 a glass). We were then recommended the Picpoul de Pinet, Chateau de la Mirande, Languedoc 2011 (£4.95 a glass, £19.50 a bottle). It was a decent, fresh white that worked well with the dishes we had. For dessert we tried out the Mount Horrocks Cordon Cut Reisling, Clare Valley, Australia 2009 (£10.50 a glass). It was a super dessert wine and one we're putting on our shopping list.

The food and the experience of Sonny’s contributed to a great evening overall. Rebecca and Philip have done a fantastic job in injecting some life back into the place, and it’s well worth a visit if you’re down that way. Despite Giles’s overwhelming praise for Sonny’s and how it’s put Barnes ‘back on the map’, it still does feel a long way to go for a meal, especially when you factor in the trek from the station. We think it will have a very bright future for attracting those within driving distance. Whether it manages to drag die-hard Londoners out that way for an evening remains to be seen, but hey, who needs Londoners anyway? All the more delectable fois gras parfait for the locals.

Find out more about Sonny's Kitchen

Hot Dinners were invited to eat at Sonny's Kitchen. Prices were correct at time of writing.