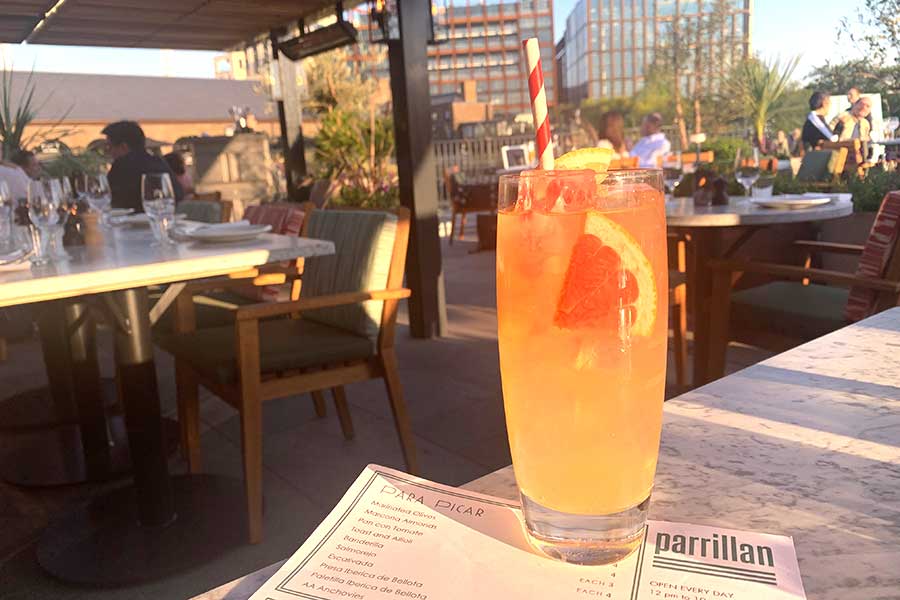 Sangria in the sunshine on the terrace at Parrillan

So what do we need to know about Parrillan?

For its many, many fans - just knowing that this is the latest opening from Barrafina will be all they need to know to make the booking. But if you need a little more to get you there, then know that this is a new terrace bar and grill from the Harts Group who are the folk behind Barrafina, El Pastor, Quo Vadis and more.

But you cook the food yourself?

Yes, the restaurant is named after a Spanish parilla or BBQ and was inspired by chef Zapata Martin's favourite Ibiza hangout C’an Pilot, which is best known for the grill that arrives at your table along with a part-grilled steak for you to finish off to your liking. Fans of Barrafina will be also familiar with their milk-fed lamb's kidneys at Barrafina Adelaide Street which come with a similar teeny grill.

Here the grill's much larger, being delivered to your table for the main course for you to do the DIY grilling yourself. But if all that sounds like a slog (it's not - it's great fun) there's also plenty of dishes from the kitchen at Barrafina for you to order too.

It's opened up outside Barrafina at Coal Drops Yard at King's Cross. So head to Granary Square from the station and then take a sharp left into Coal Drops Yard as you enter the square. You'll find Parrillan up on the top level outside Barrafina. You can choose whether to sit out in the open or underneath the covered part - there are also really good heaters so you won't be remotely cold.

We can attest to the lethal nature of the margaritas downstairs in Casa Pastor or there's also the bars at Vermuteria further along Coal Drops Yard or at Hicce - on the same level but across the courtyard.

So how exactly does he menu work?

The menu is split into Para Picar - small dishes from Barrafina, then a section of raw, prepared dishes for you to throw on the grill, along with sides and salads. Work your way through the tapas first before moving onto the grilled part of the evening. 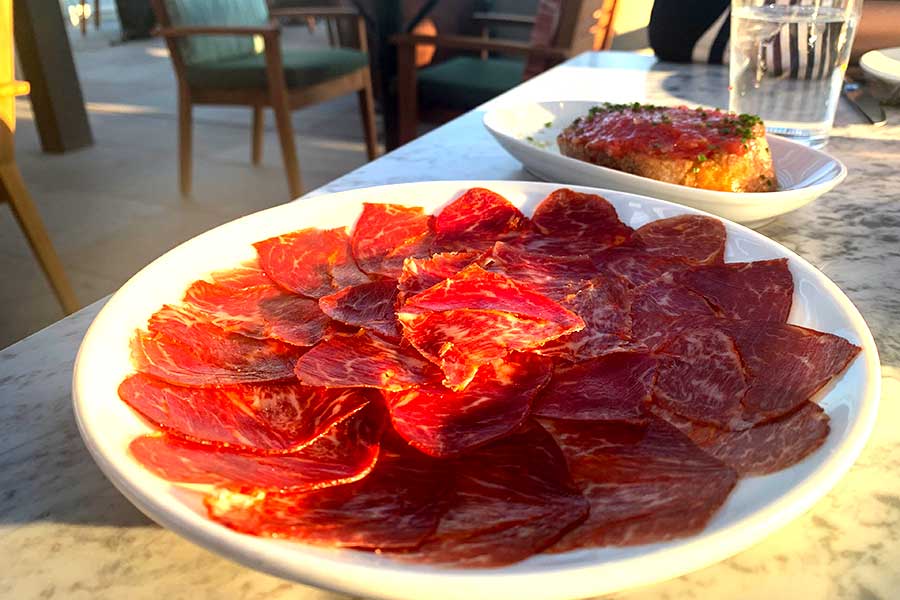 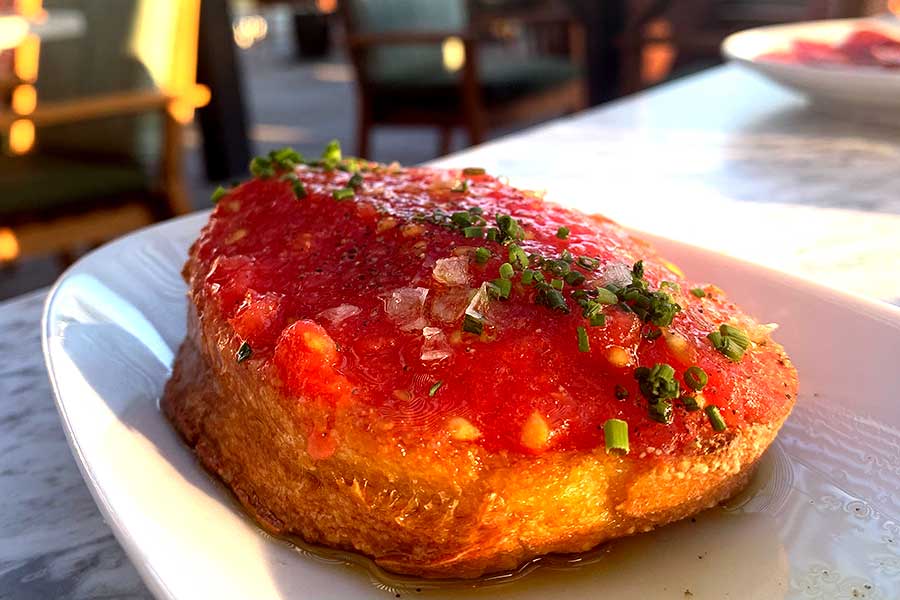 Obviously had to try the pan con tomate (£4). Which looks amazing. 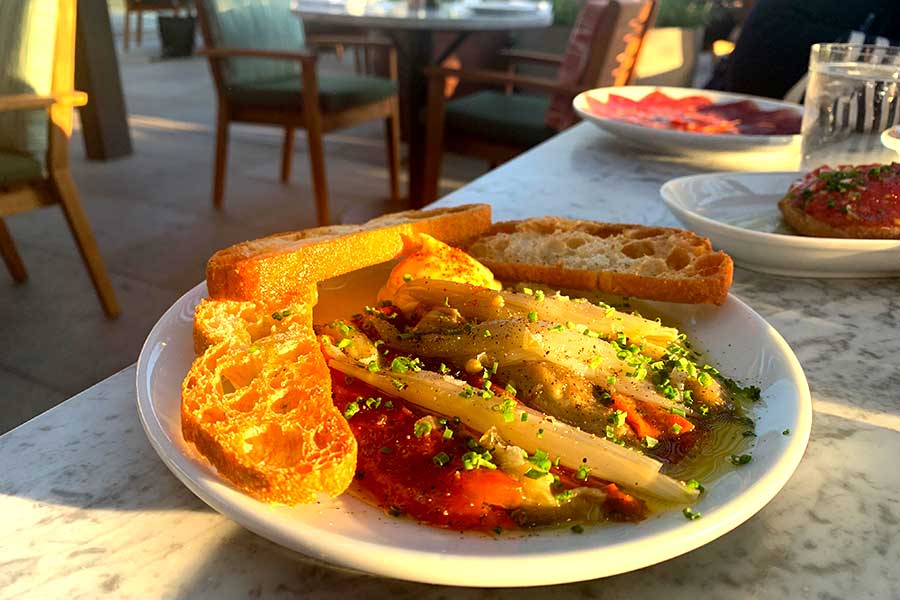 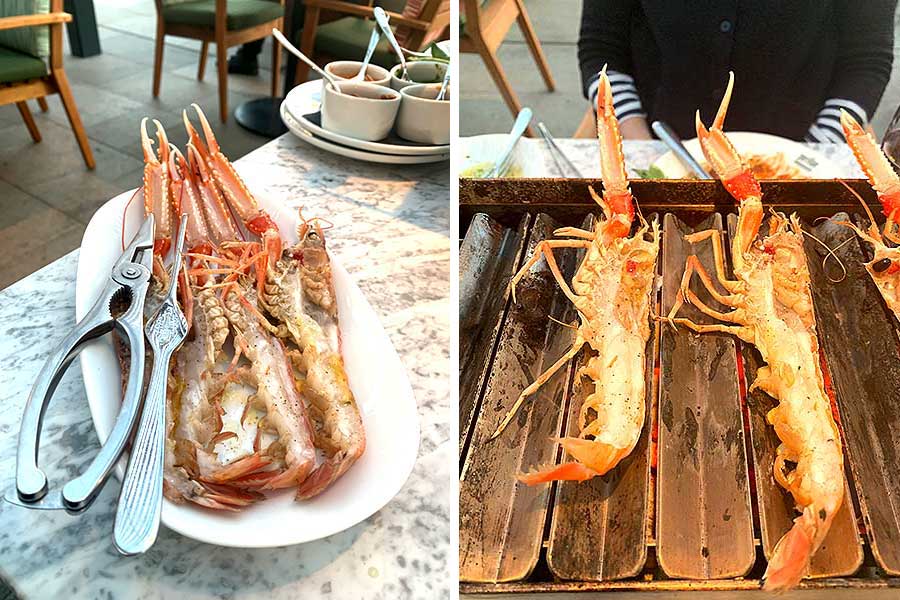 Before and after - four langoustines were £15 and come prepared to just pop on the grill and then pop into your mouth. 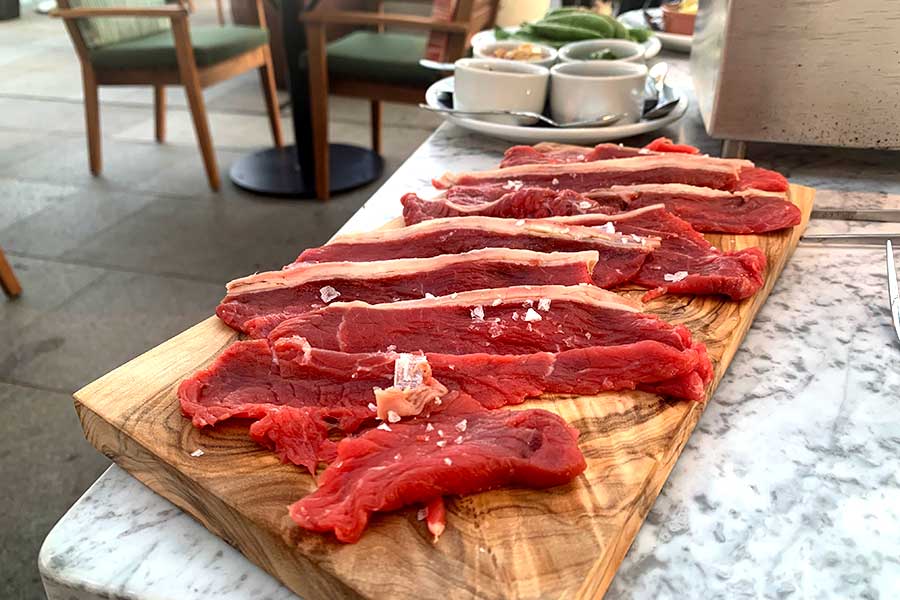 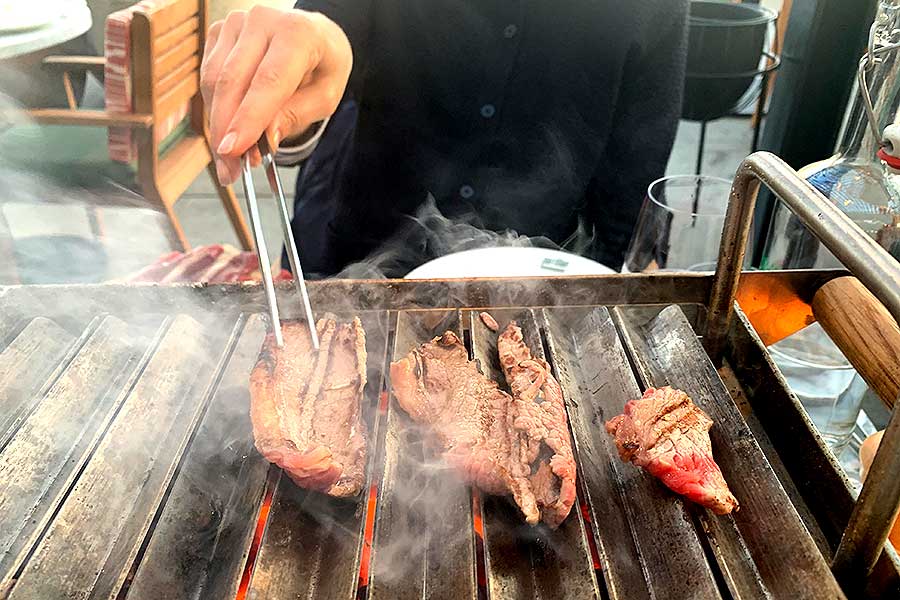 DIY - cooking the Pluma Iberica (£10) on the parrilla - it cooks in a flash, so be careful not to overcook it.

Vegetarians have two things to cook on the parilla - fresh peas in their pods or a vegetable parrilada (platter of veggies to stick on the BBQ). But there are also loads to choose from in the para picar section including: 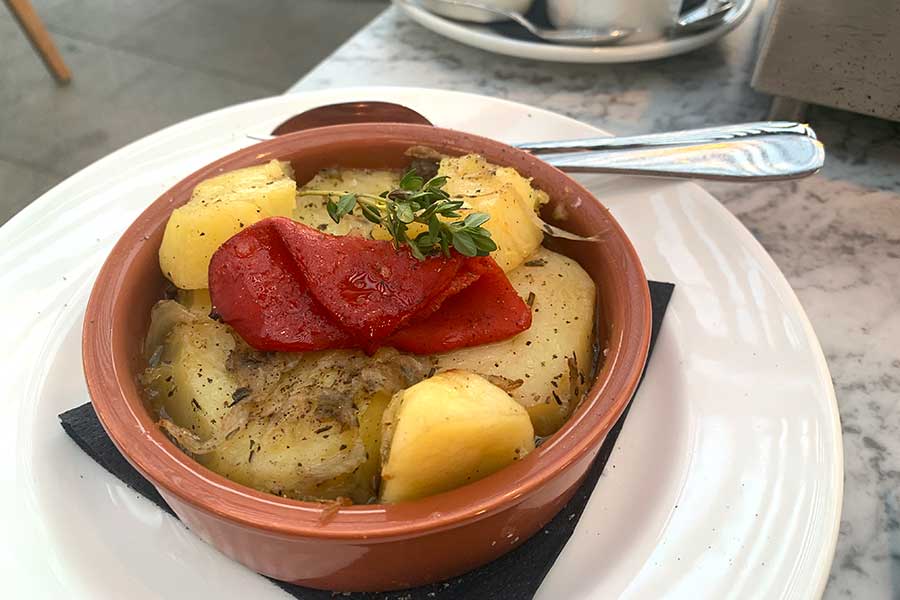 This side of Patatas Panadera (£5) hit the mark 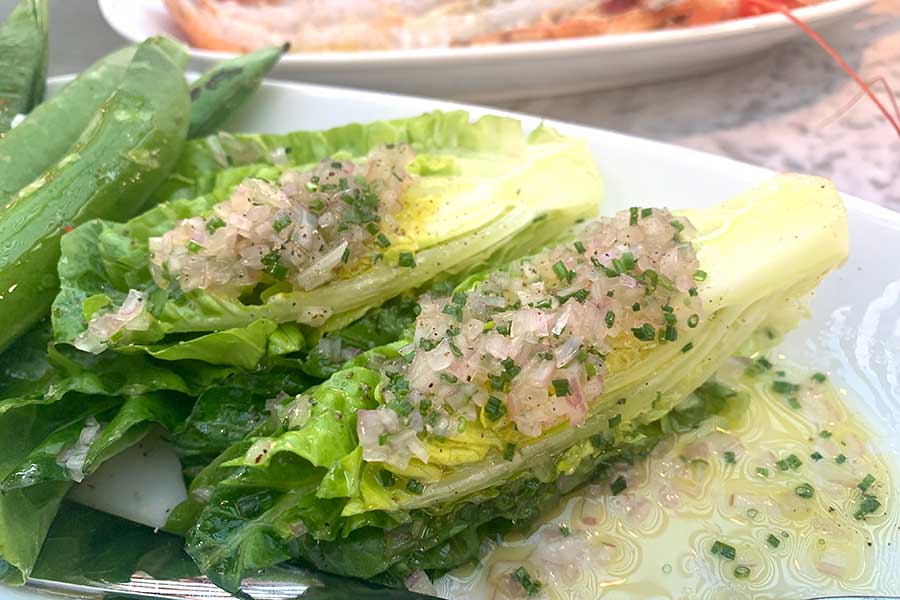 We're not quite sure what they did to the dressing of this green salad (£5) to make it taste so incredible, but whatever it was, it worked. 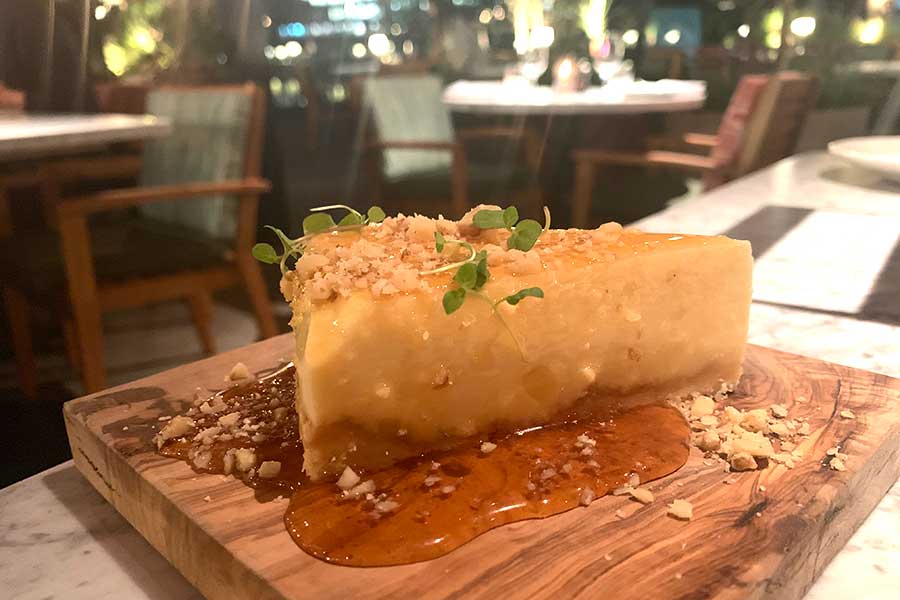 The torta de la casa  - when we went it was a Mel I Mato tart, made using an artisanal cheese called ‘mató’ from Fonteta, Girona, with honey and nuts.

There's a Spanish G&T menu, along with a selection of cocktails, beers and vermuts to choose from. Our house sangria was just the ticket - it also comes in the jug if there's a group of you. We also had a super bottle of organic wine - which went perfectly with our picanha and presa - the El Mago 2017 37 Terra Alta (Garnacha) which was £37.

Sitting out here on a sunny evening and you're about as close as you can get in the centre of London to a terrace somewhere on the south coast of Spain. Granted, you have Eurostar trains going past instead of boats - but this beautifully constructed sun trap is going to be one of the hardest seats to get once the British summer kicks in.