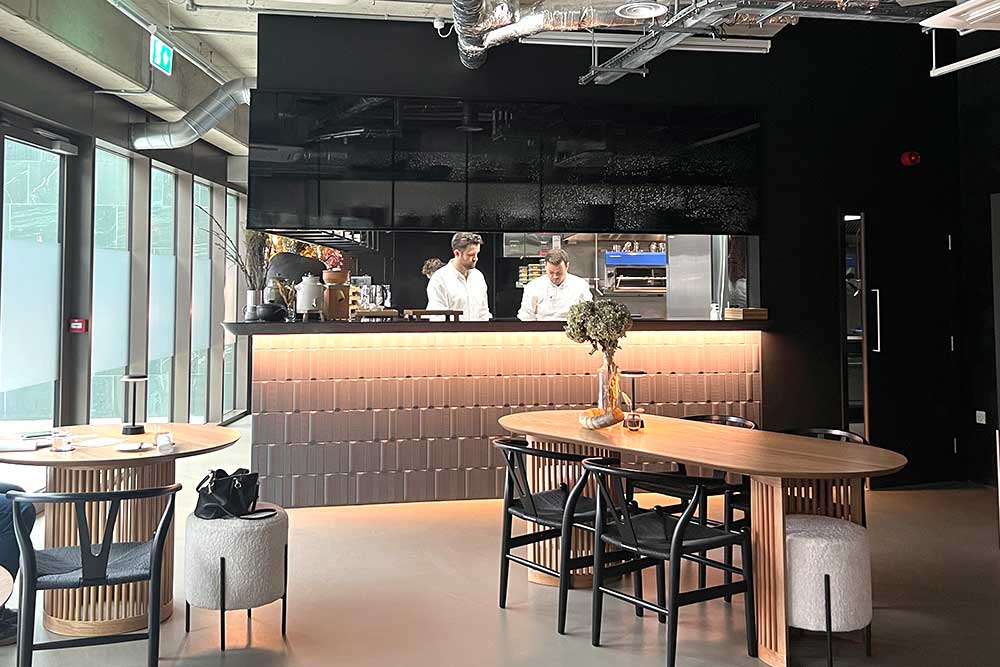 A look into the room at Oxeye, with the open kitchen at the back. There's also an extensive space for outside dining to the left when the weather improves. And yes, that is a chair for your bag (although could probably suit as an extra chair too).

What can you tell us about Oxeye?

This is the first solo restaurant from chef Sven Hanson Britt. Having trained up at The Ritz (and been both a finalist and winner of Masterchef: The Professionals) he launched Oxeye first as a residency at Carousel. He's apparently been planning it for the best part of a decade and there's a strong sense of provenance and local sourcing throughout the menu. Summing up, it's primarily a tasting menu experience that's near fine dining but with less fuss - probably closer to Viajante or Da Terra in execution.

It's all part of the new complex that's growing up around Nine Elms - very near Homeboy and Darby's. That's about a 10-minute walk from Vauxhall station and about five minutes from the shiny new Nine Elms station. 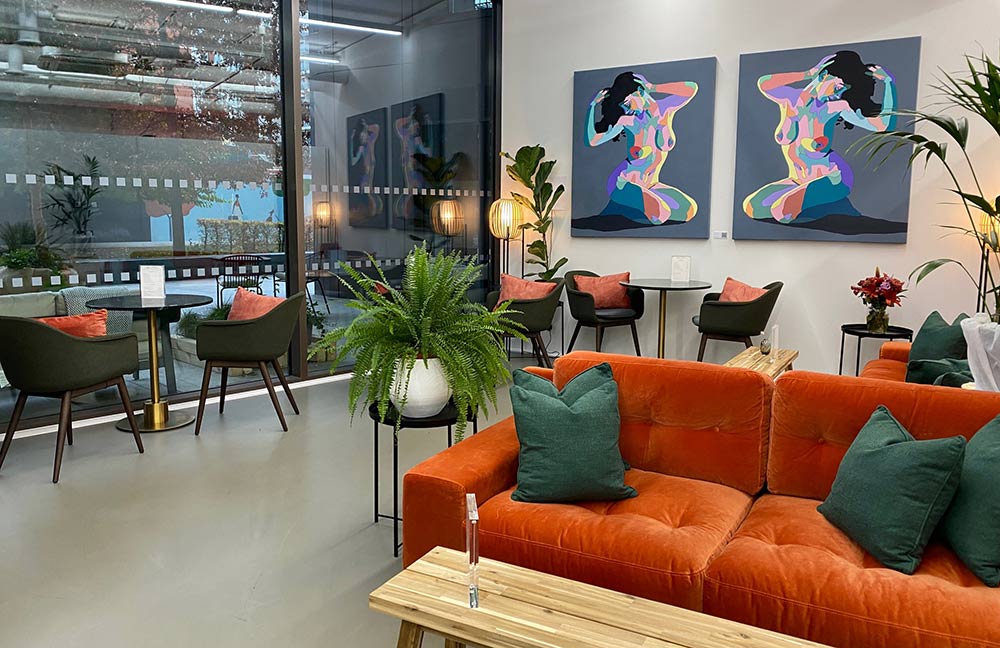 The wine bar, just outside the dining room - a welcoming spot (and with very comfy sofas).

Where should I go for a drink before/after?

Your best bet is the aforementioned Homeboy, who opened their second Irish-influenced bar just across the way from Oxeye or the bar at nearby Darby's. Alternatively, there's also a small bar at Oxeye, which is an extremely pleasant space to pop by for a drink too.

What about the food - what can I expect here?

It's all about the tasting menus here (£99) which is also available as a slightly shorter menu during lunch (£65). Sit down, and strap yourself in for some hugely inventive dishes that have a big focus on local sourcing (where feasible) whilst also showcasing ingredients from throughout the country. Cuisine-wise, it's primarily a modern-European approach, dictated by the ingredients they have on hand. Expect the menu to shift quite a bit throughout the seasons as a result.

To give you an idea, here's a snapshot of some of the courses we had from the tasting menu: 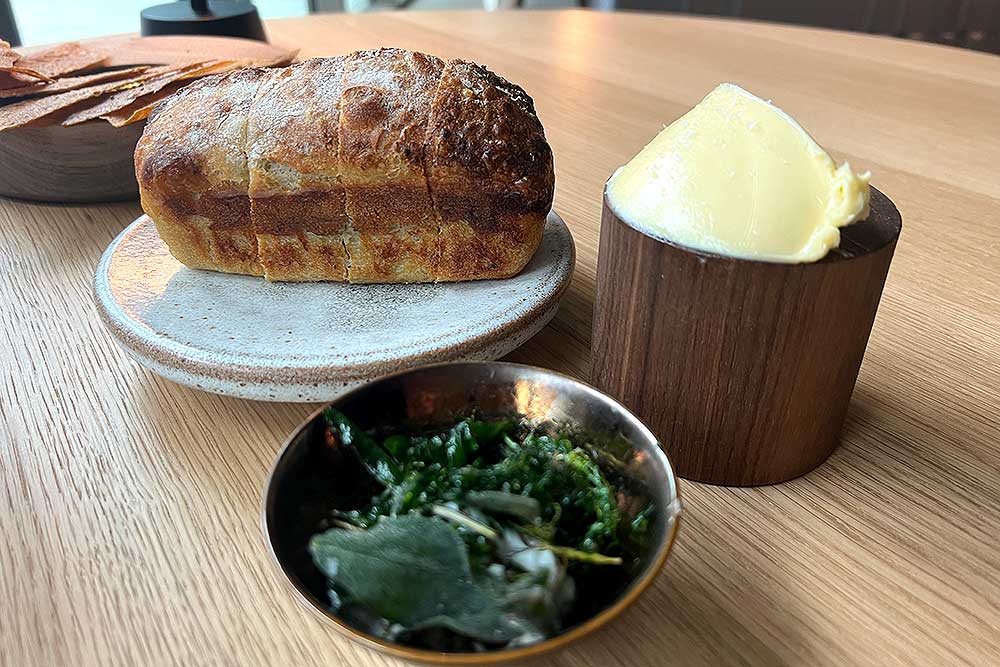 Special mention for the bread course - particularly the farmhouse sourdough with smoked potato, as well as the Brightwell Ash goats cheese to spread on it (and extra points for proper salted butter). 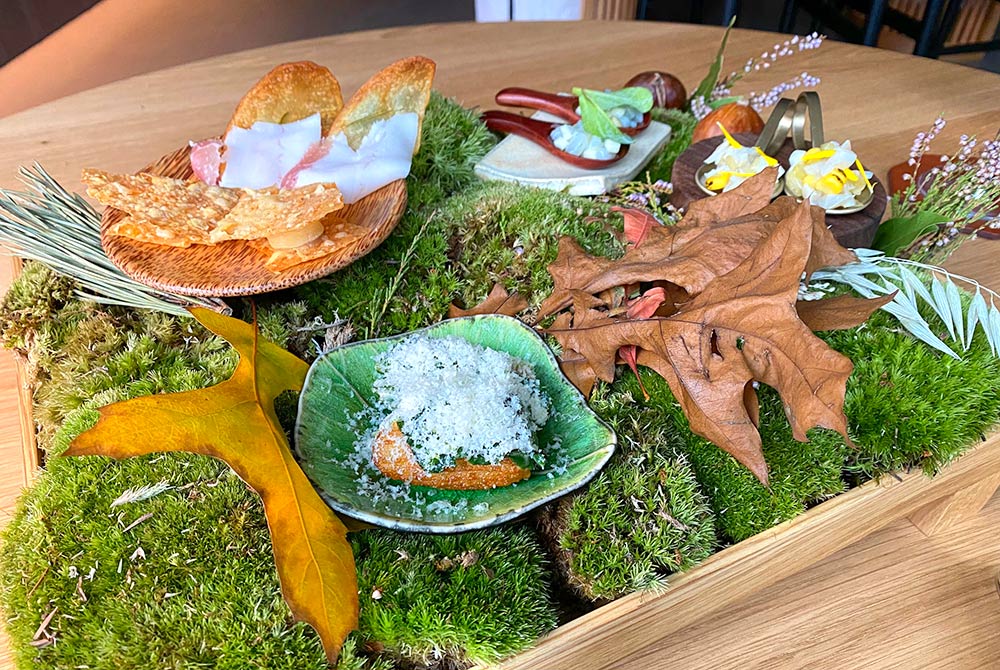 The canapés course is particularly strong. This included razor clam on fried corn, as well as a few extras out of sight, including oyster with russet apple. The main winner (front and centre in this pic) were the Cornish Yarg churros with nettles. 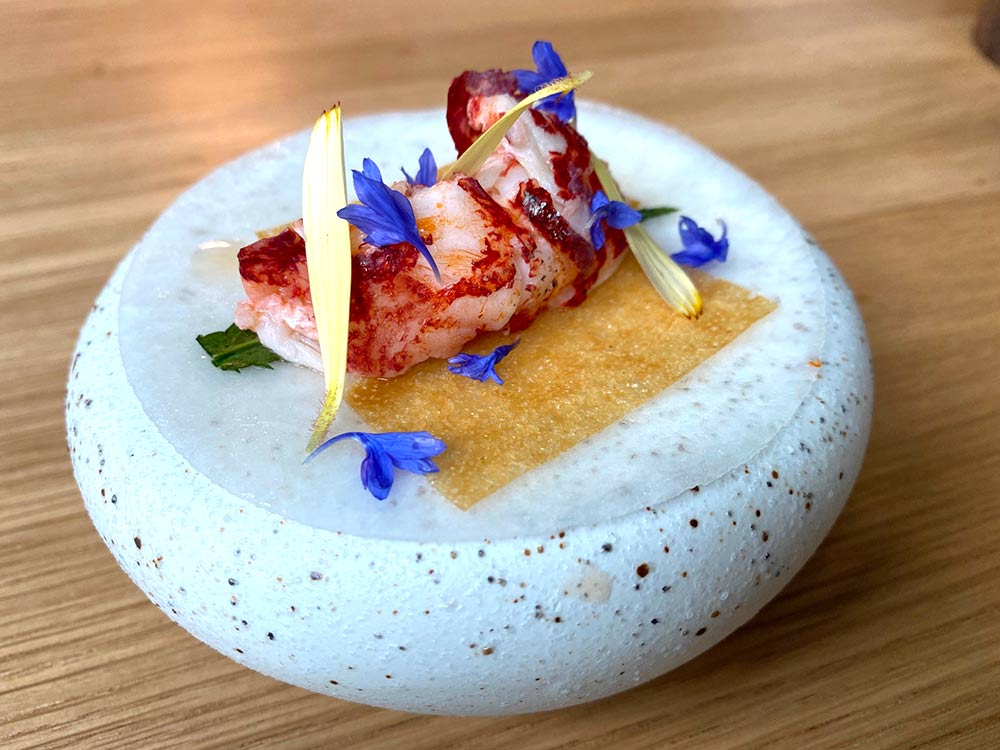 Scottish lobster with brown butter and black herbs (wrap this up like a mini taco and dip into the butter). 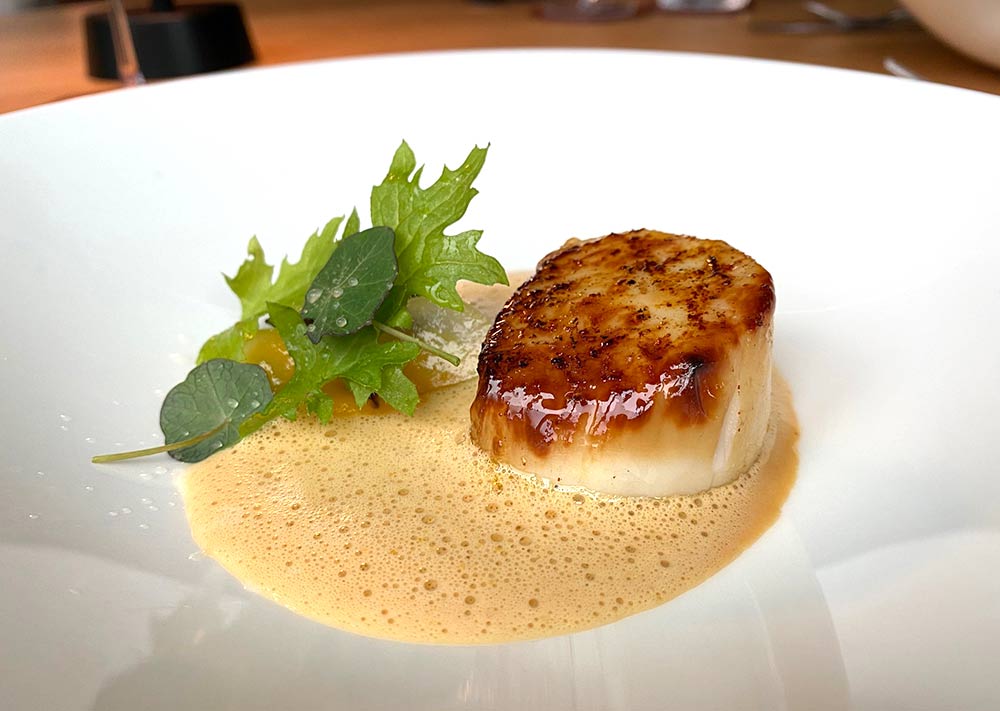 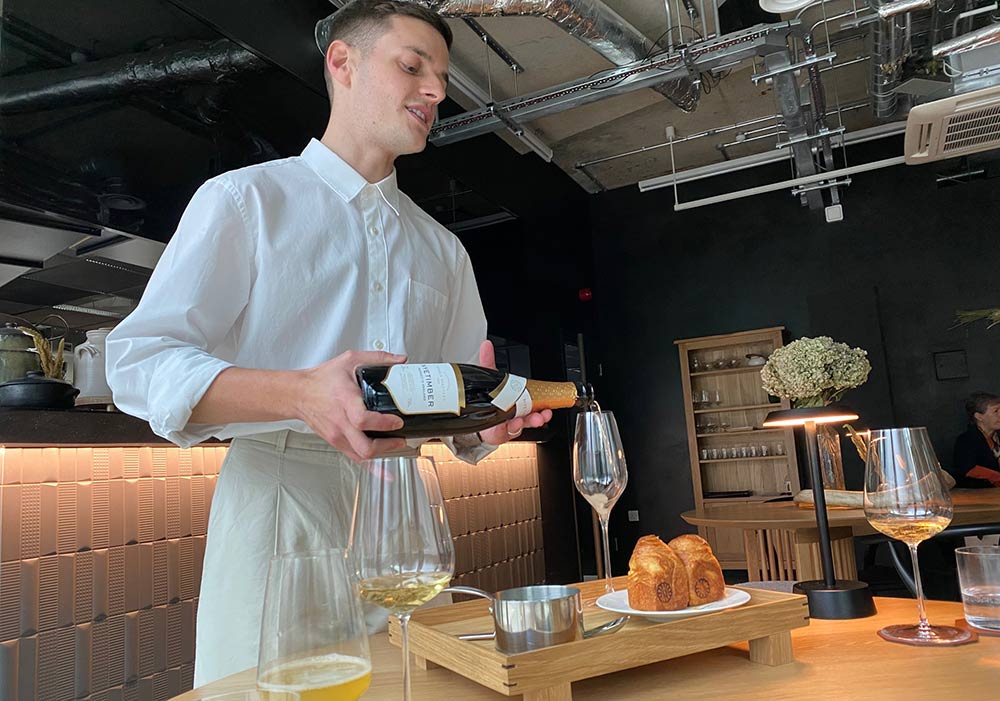 There's a fair bit of tableside theatre involved, including this course where the Nytimber is added to the sauce at the table - and it's also the accompaniment for the following dish... 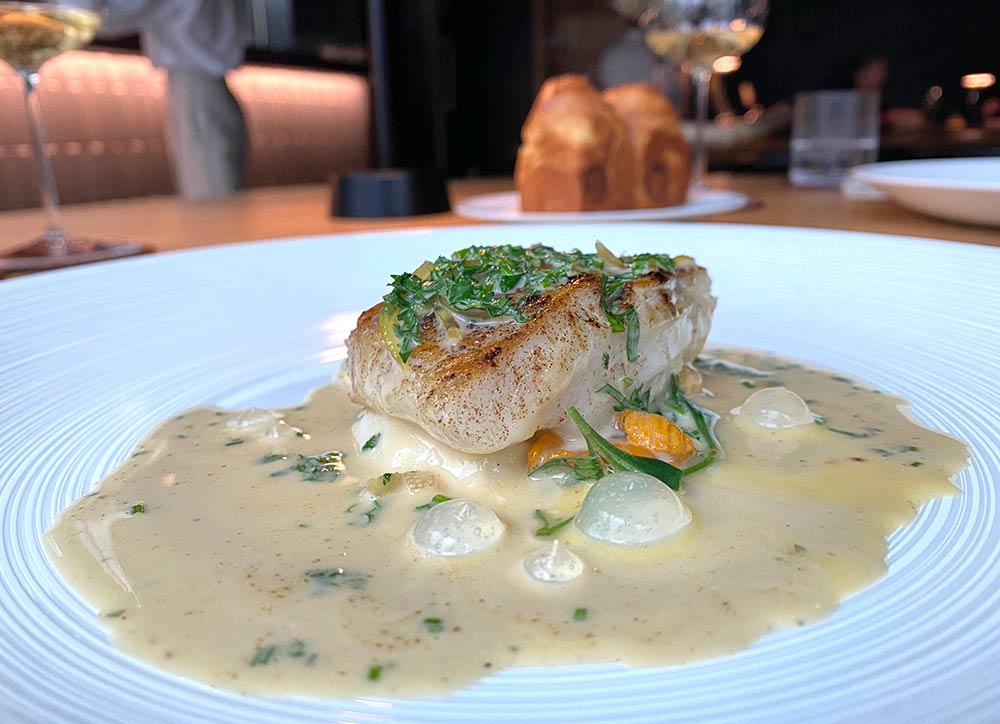 Braised Cornish hake with girolles, beach herbs, cauliflower & ‘sauce tillington’. You'll also note the brioche lurking in the back of the pic - that's also part of this course and VERY handy for that sauce. 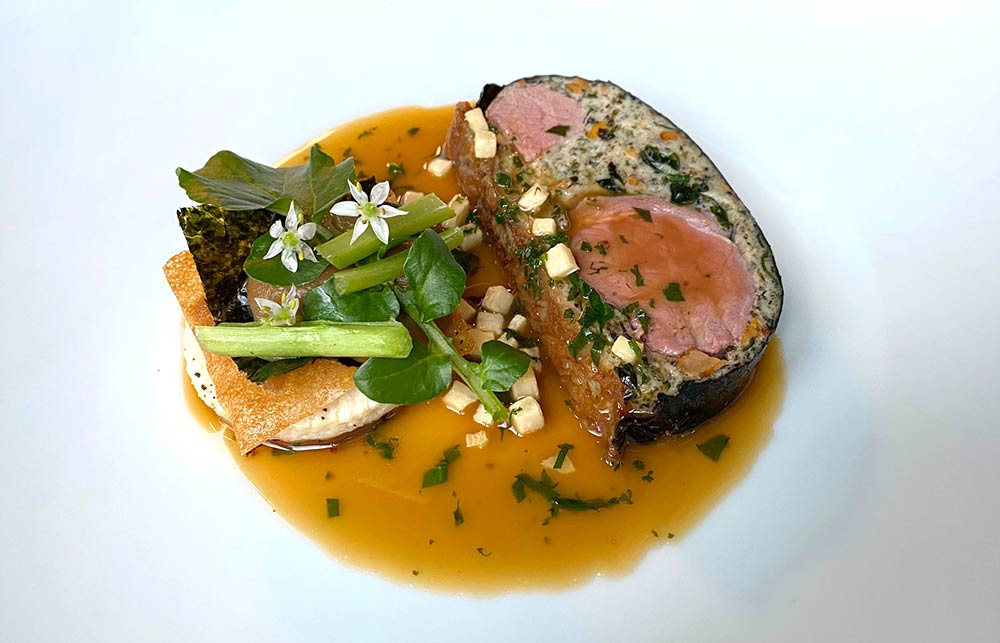 Jacob seat saddle, with fresh seaweed and turnip. The sheep is from Park Farm in Derbyshire and Hanson-Britt tells us he's been working closely with farmers Tori and Ben. The Jacob sheep are supposed to have come to England when the Spanish Armada sunk and they're sheep that eat turnips and kale at the farm. That's brought back into the dish as they stuff the saddle with seaweed and turnip and it's served with a sauce of the same ingredients. AND it looks amazing! 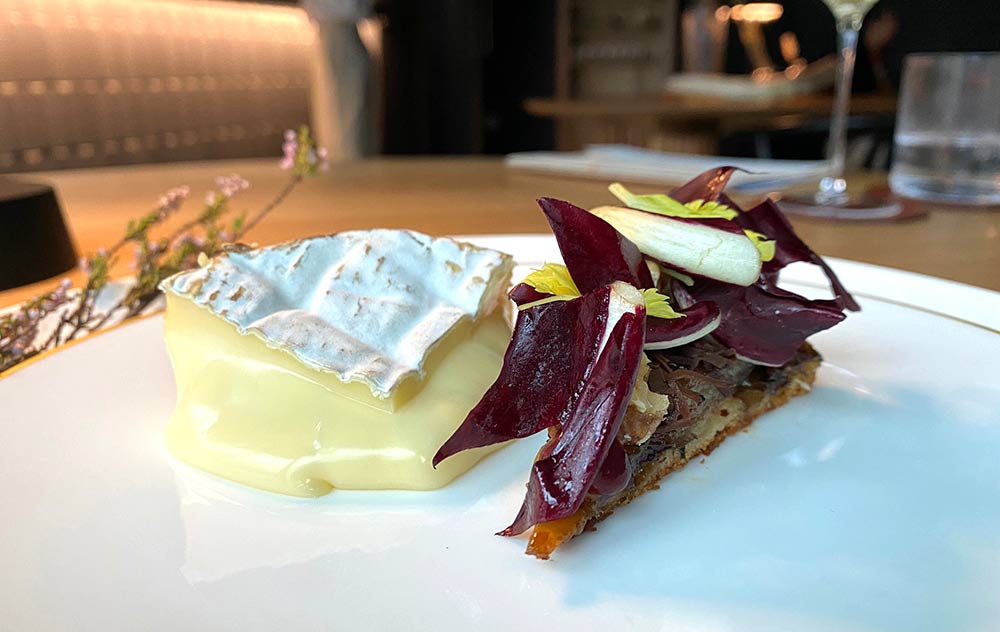 The next-level cheese course. The Winslade is Hampshire’s version of a Vacherin mont d’or and aged like a Camembert. Indeed it really does try to escape the plate as you're eating it - they age the cheeses in their cellar until "they’re gooey and a perfect texture". It comes with a tarte fine of caramelised chicory, roasted walnuts, black truffle and grapes. 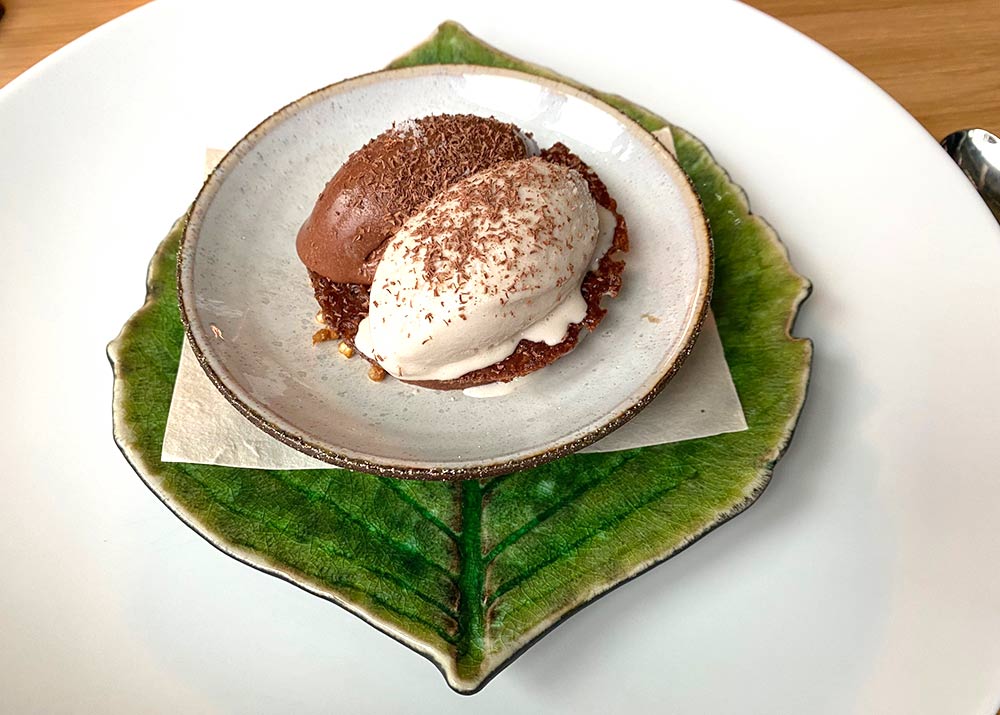 And finally, finishing up with chocolate. This is Arhuaco Businchari cocoa with Sark sea salt, birch syrup & buckwheat. The chocolate comes from their sister company Cartografie chocolate (run by Sven’s partner Kae) which sources ethical cocoas from across the globe. This is from the Arhuaco tribe in the Caribbean coastal area of Colombia and the “businchari” bean is not grown anywhere else. It's a hot chocolate pudding, sweetened with birch syrup and then Channel Island sea salt. It’s served with a cocoa biscuit, roasted buckwheat, buckwheat ice cream and chocolate sorbet.

That's just a taster - there's more to the menu and it's already changed a little since our meal, so the restaurant should reward repeat visits.

The wine list at Oxeye is particularly interesting for its English focus with what might be the largest selection of English wines we've ever seen on a London menu. The drinks pairing - also exclusively from the UK - is strongly recommended, and will take you through some fascinating lesser-known wines (as well as the more recognised Nyetimber and even a Kernel beer and English brandy). UK wines start at £27 (a Chardonnay from Hattingley Valley) and there are plenty in the £30-£40 range too. There are wines from the rest of the world on the list (a few at the entry-level price of £29) but we'd recommend this as an opportunity to try more local wines.

There's a small shop by the bar - so if you've tried a wine that you'd like to take home - there's a chance to do so here. There's also a gallery upstairs that's well worthy a look (and this is where their private dining room is too).

Oxeye is a very different type of restaurant to the ones that have opened around Nine Elms - but it's also quite distinct from recent openings around the rest of London. Sven Hanson Britt and the team are delivering a unique tasting menu with just beautiful presentation and a strong sense of local sourcing and provenance. A genuinely intriguing experience that's well worth you heading to Nine Elms to seek it out.

Hot Dinners ate as guests of Oxeye. Prices are correct at the time of writing.