[SIGPLUS_EXCEPTION_SOURCE] Image source is expected to be a full URL or a path relative to the image base folder specified in the back-end but /blog/2012/electricdiner/gallery is neither a URL nor a relative path to an existing file or folder.
0
Shares 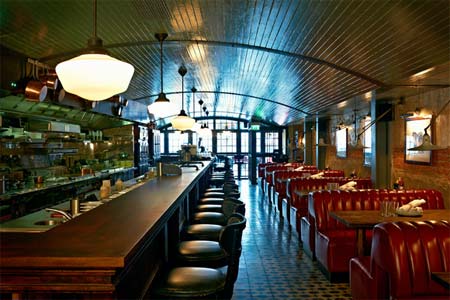 What can you tell us about the Electric Diner?

The Diner is the Electric Brasserie emerging from the ashes - literally. After a fire last year, the cinema and brasserie were shut for a major refit, part of which is this American style diner. It's run by the Soho House group, who have joined up with American chef Brendan Sodikoff, from highly rated Chicago restaurant Au Cheval, to help give the menu some authenticity.

It's right in the middle of Notting Hill on the Portobello Road, about five minutes walk from Ladbroke Grove Station, part of the Electric Cinema building.

Given the portion sizes, we think anyone who hasn't eaten in a week would do particularly well here. Inside, it's a mixed crowd of locals and visitors, getting younger as the night draws on. That's probably down to the fact that they don't take reservations, so you can expect a queue down the end of the bar while waiting for a free table. But anyone who enjoys good American diner food will be totally at home here.

We have to admit to being a little unfamiliar with the area, but if you're after a cocktail then Portobello Star or Trailer Happiness seem like good bets or the Cow if you fancy a beer. Alternatively, if you're a Soho House member, you could just head upstairs to the (also completely revamped) private members club.

As mentioned, if you turn up late, you'll just be thankful for any seat. If there is a choice, it's either booths down the side or a large bar space for counter dining where you can watch the chefs at work.

What about the food itself?

It's American diner fare - perhaps a little poshed up. There are a few salads on the menu, but if you come here a salad really shouldn't be your main concern. Instead there's a choice of small and large plates (although these can be confusing as pretty much everything's large), an "eggs" section and a sandwiches section.

We tried a range of dishes across the menu and enjoyed pretty much everything, even if we did over-order so much that a lie-down in the booths after sounded like a good idea (and a "well done" from our waiter rather confirmed that we'd gone a bit crazy on the menu). The marrow and brioche toast was both excellent and generous and the king prawns with chilli also hit the spot. We tried the pickles as a snack, which were OK, although again these were just too much for even two people (but great all the same).

But it was the main course that did us in. First up was the cheeseburger, available as a single or double and with egg and bacon if required. Like fools we ordered the double with everything, choosing the amazing thick cut maple glazed bacon to go on top of a double burger (£13) that matches well against some of the best available in London. That's no mean feat at the moment given London's burger boom (although Soho House have had some practice with Dirty Burger). The bacon is also available as a side, and is a must-order if you're not having the burger.

To go with the burger, we decided some chips were needed and the chips with egg and mornay sauce sounded like a good bet for a fiver. However, the low price disguised what was in fact another main course of fried egg and chips with mornay sauce for dipping. That didn't stop us eating all of it though...

Our other main course was the flat iron chicken with preserved lemon (£15) which was pretty much half a chicken, juicy and oozing with butter. With that we had crushed potatoes in a roasted garlic gravy - carb heaven.

After this, we had to wait at least 20 minutes before we could even contemplate dessert and even then, the chocolate cream pie (£6) was just a little too heavy at that point of the meal. Still, it was tasty and we'd happily order it again if we'd eaten less beforehand. A few more lighter dessert options - or even an ice cream sundae - would be a welcome addition to the menu.

There's an impressive list of draft beers available, with Anchor Steam, Sierra Nevada and Camden's Gentlemen's Wit standing alongside the usuals at £5 a pint. There are also a few cocktails at the £8 price point and wine starts at £19 a bottle going up to £42 with everything available by glass or carafe and some interesting American wines a welcome change from the usual London wine lists.

Even though we ever so slightly over indulged, it's hard not to enjoy the Electric Diner. Service was brilliant, the decor and buzz contributes to a general sense of wellbeing and as long as you don't order as foolishly as us, you'll have a good time here. What's particularly unexpected are the prices which for this part of town are really reasonable. All in all it'll be a great place to go and blow your New Year detox.

Find out more about the Electric Diner

Prices were correct at time of writing. Hot Dinners were invited to eat at The Electric Diner.