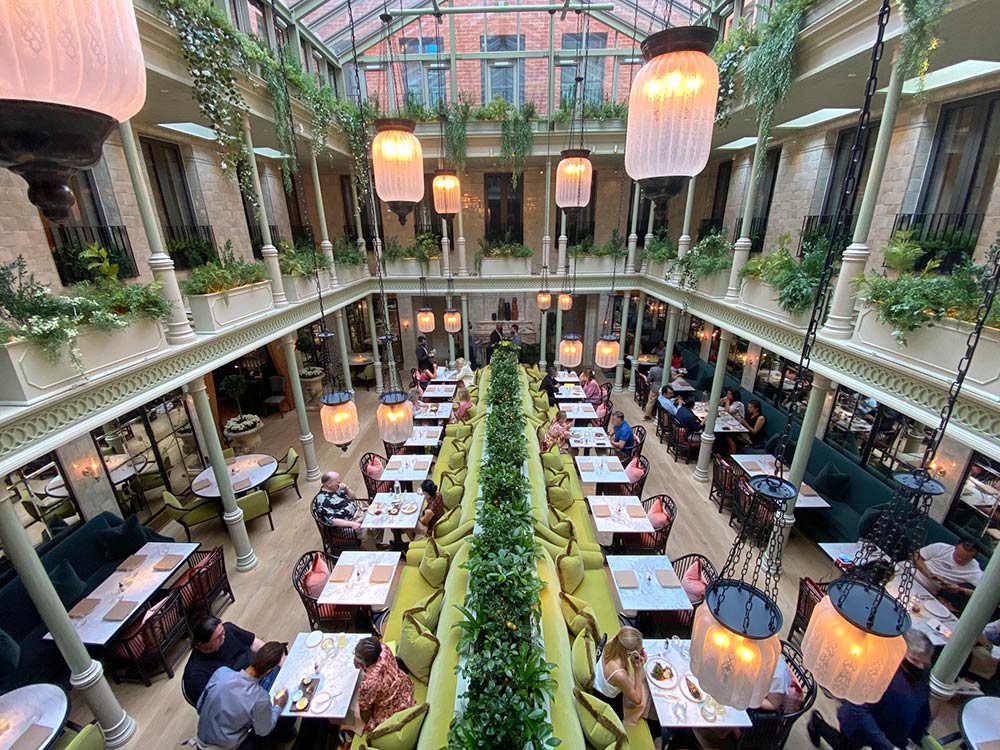 The main atrium restaurant. Yes, it IS impressive.

What can you tell us about The NoMad?

The hotel started life in New York in the NoMad district (that's North of Madison Park) back in 2012. Then it was best known for being the location for the second New York restaurant of 11 Madison Park's Daniel Humm, although he's now left NoMad and the group that created it, concentrating on the newly vegan 11 Madison Park and London's Davies and Brook.

The hotel group ater expanded to LA and Las Vegas and has now hopped across the pond to launch in Covent Garden. Chef Ashley Abodeely is now in charge of the kitchen (she was Executive Sous Chef at NoMad in New York).

The hotel has taken over a classic building, the old Bow Steet Magistrates Court in Covent Garden (about a five-minute walk from Covent Garden tube). They've had a big overhaul of the original building - with quite a striking contrast between the modern and the classic that works incredibly well. Like the original in New York, inside it's a warren of rooms with bars, drinking spaces and function rooms hidden behind every corner (and the odd reference to its original use as a court).

It's definitely one of the best looking openings in London for quite some time, pre or post-pandemic. 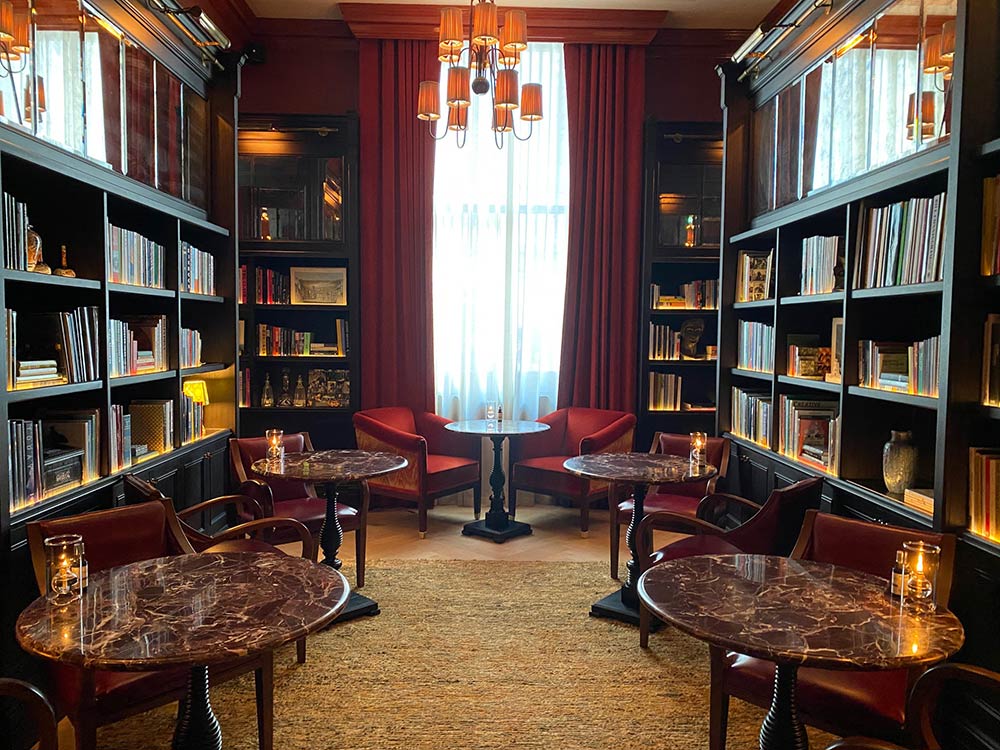 One of the side rooms, this is the hotel's Library Lounge. Usually, this is just for guests, but at the time of writing, there's an opportunity for non-guests to grab a table in here too.

So what is there to eat and drink at the hotel?

There are two main sections - Side Hustle, which is the bar on the ground floor (and has its own food menu) and the main atrium restaurant (which as you can see from above, looks amazing, but we'll come back to that). There's also the Library bar, but that's usually just for guests (although they might make an exception at the moment, owing to the general lack of overseas visitors).

A drink before dinner is absolutely recommended, and for that, it's best to grab a table or a stool at the bar in Side Hustle. The bar menu here is Mexican-influenced - so there are tacos, tostadas, oysters and what sounds like a very tempting black truffle tlayuda. But if it's just drinks you're after, then the cocktails are all around the £15-£16 mark and are quite outstanding. The original NoMad's cocktail book won a James Beard award, and some of their classics are on the menu, as well as some new creations.

If you want to get heads turning, then there's one drink that needs to be top of your list: 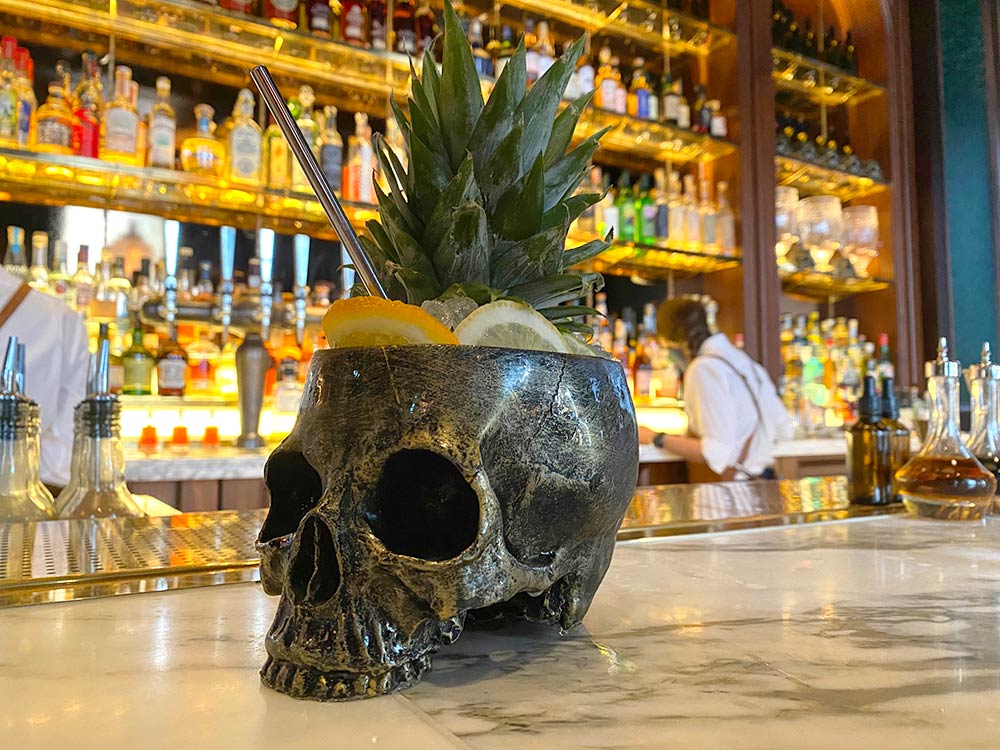 So what about the restaurant itself?

The main restaurant is downstairs in the atrium of the hotel. As you can see in the photo at the top of the page, it is a fantastic looking room, flooded with light during the day due to the high glass-covered roof. It's easily one of the best looking new dining rooms in London right now.

As well as the room in the photo, there are some private areas off to the side and, as you come down the sweeping staircase, there's another bar just outside the restaurant. That was doing just as much business as the restaurant and bar, so would be very handy for a post-dinner drink.

As for the food, it's divided into snacks (including oysters and caviar), small plates, and large plates (larger dishes include suckling pig confit with wild greens & smoked bacon jam).

However, there's also one dish that has made it over from the original NoMad - the chicken dinner. This is a three-course set menu affair that's a NoMad signature. It's served to the whole table for £70 a head and goes like this: 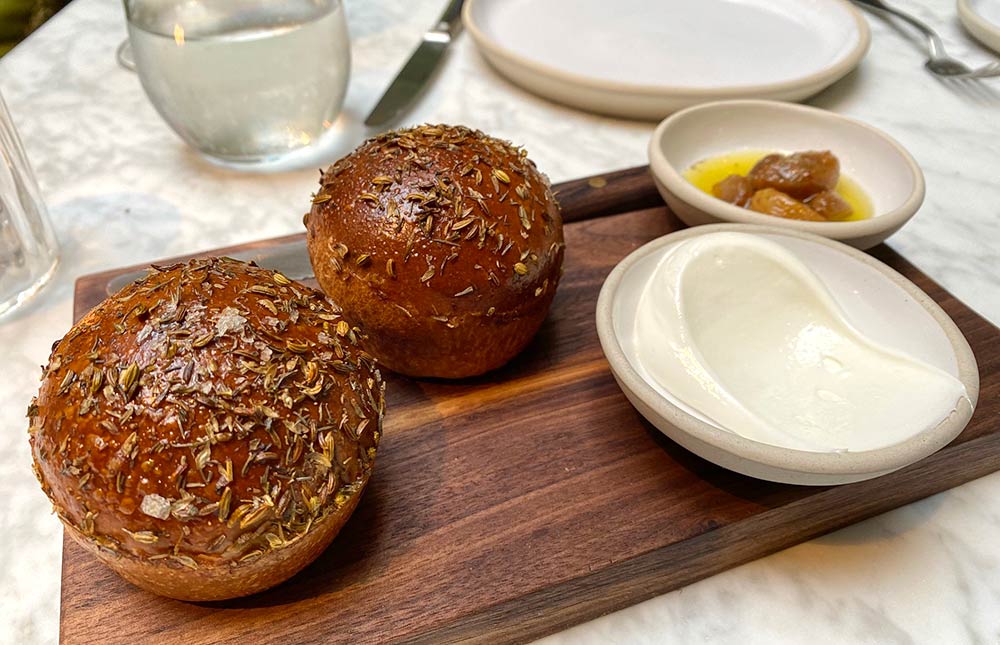 It's worth highlighting the bread course - as the parkerhouse rolls are another big thing here (they also come with the caviar dish). The confit garlic is particularly great. 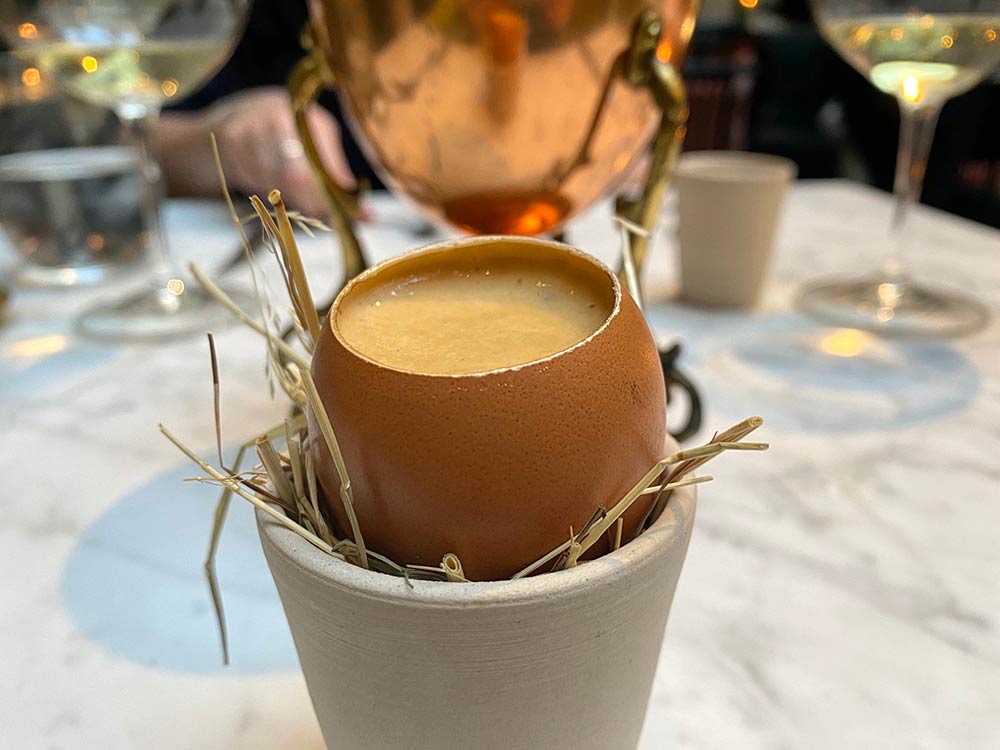 Mushroom custard & chives - dig right down for the mushroom layer. 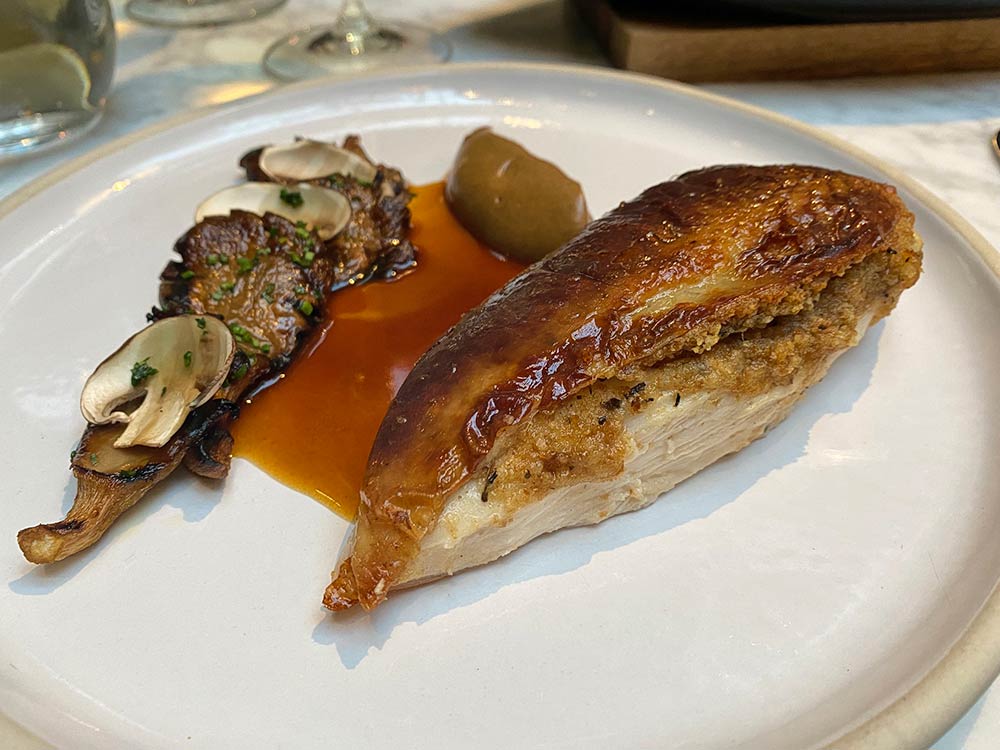 Part one of the Chicken Dinner, of which the main event is a whole brioche-stuffed chicken with lemon & parmesan. That's divided into the breast above - served with grilled hen of the woods mushroom and chicken jus and.... 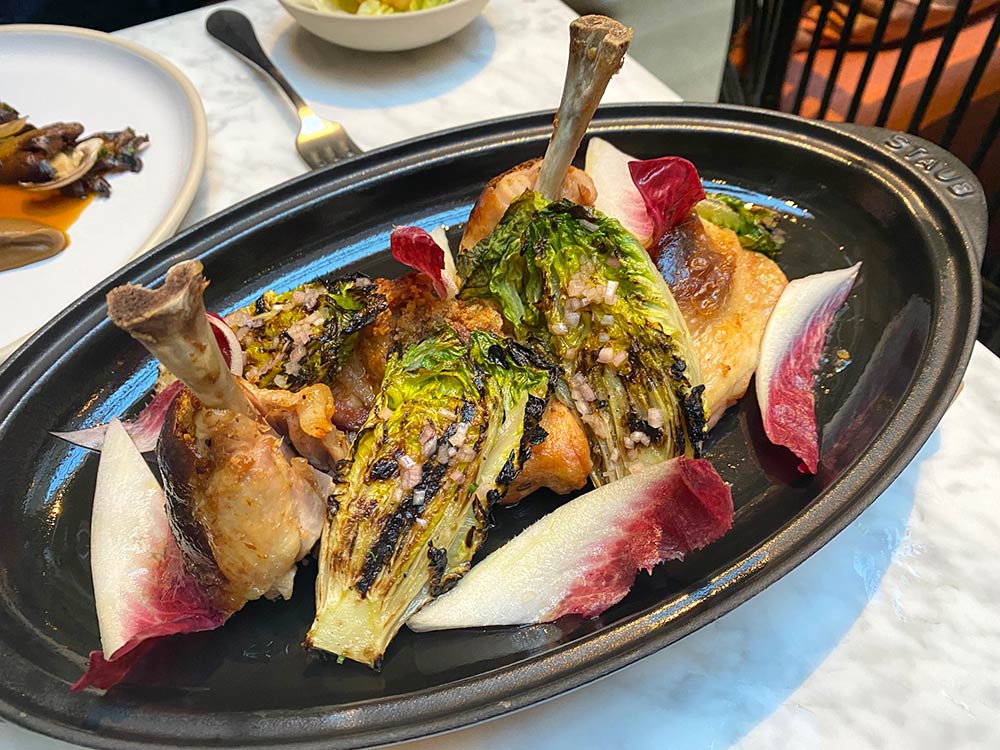 Then there are the legs and thighs - all brioche-stuffed too (yes, you can take some of this home in a doggy bag if it's all too much, you'll thank yourself the next day). 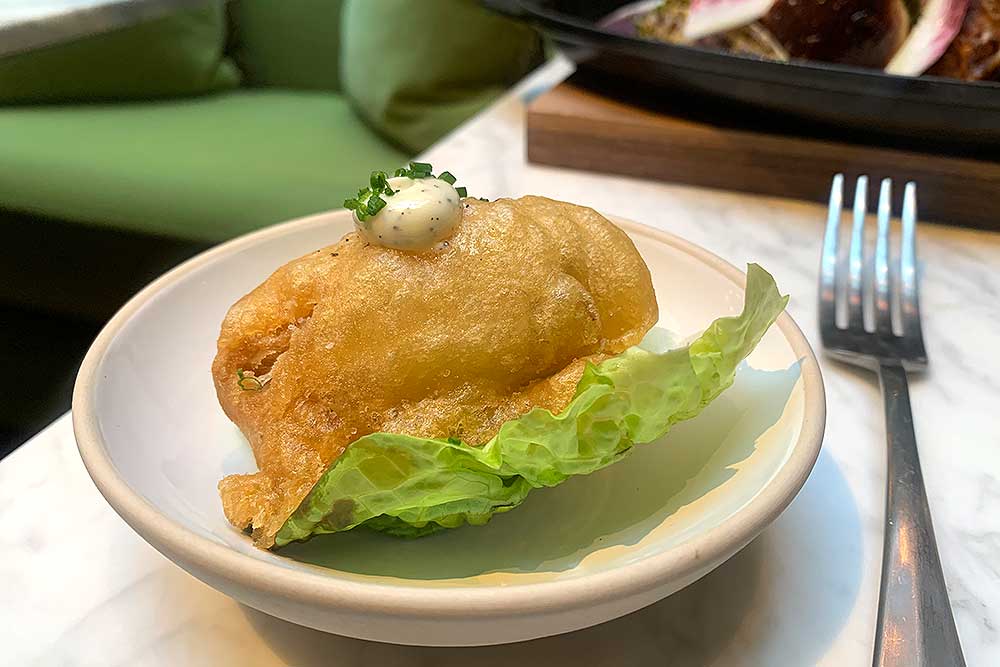 While on the side is...a deboned and beer-battered chicken wing, served in a lettuce cup with truffle mayo 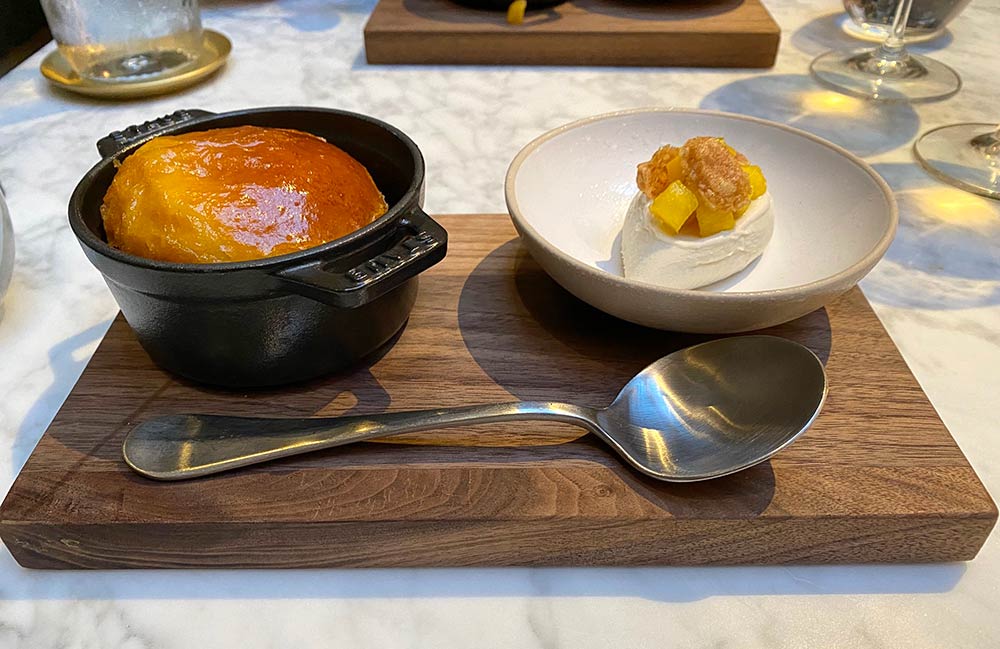 Finishing everything off is the rum baba with roasted tropical fruits and coconut ice cream. While this was an exceptional baba, it might have been better to have something a teeny bit lighter after such a full-on feast. 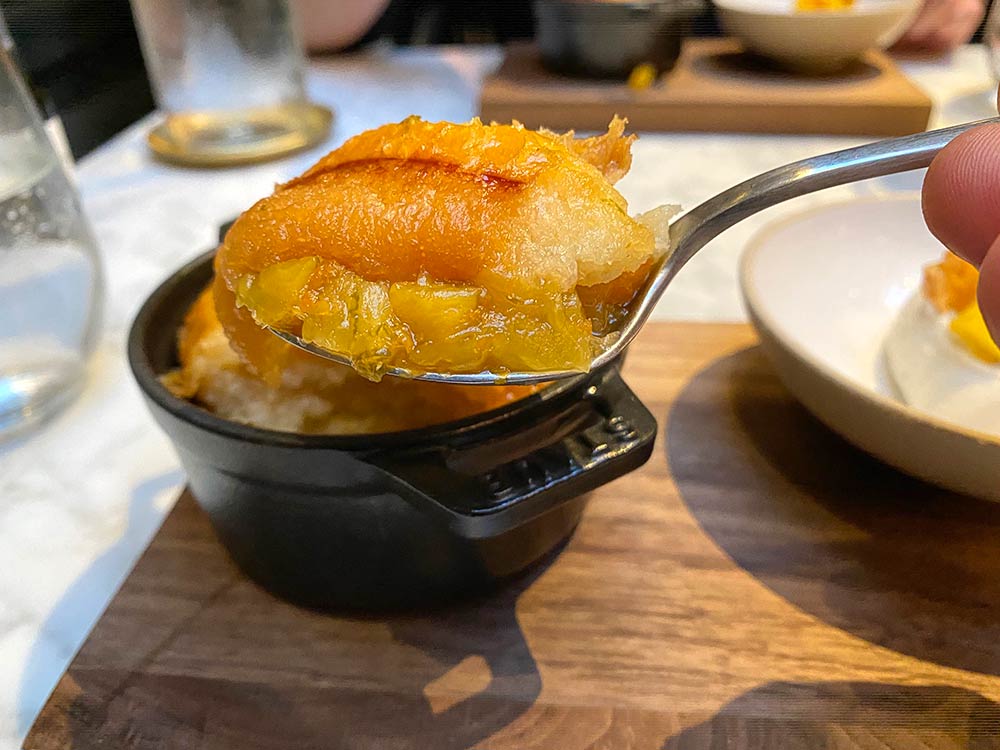 More roasted fruit at the bottom of the baba.

And how about the main menu?

If you want to avoid the chicken dinner, there's plenty more on the main menu but note that prices are on the relatively high side for London - starters are around £15-20, and mains £20-40. There are plenty of vegetarian dishes on offer too, like Broccolini, grilled with black rice, confit egg & lemon (£25) - and the following too: 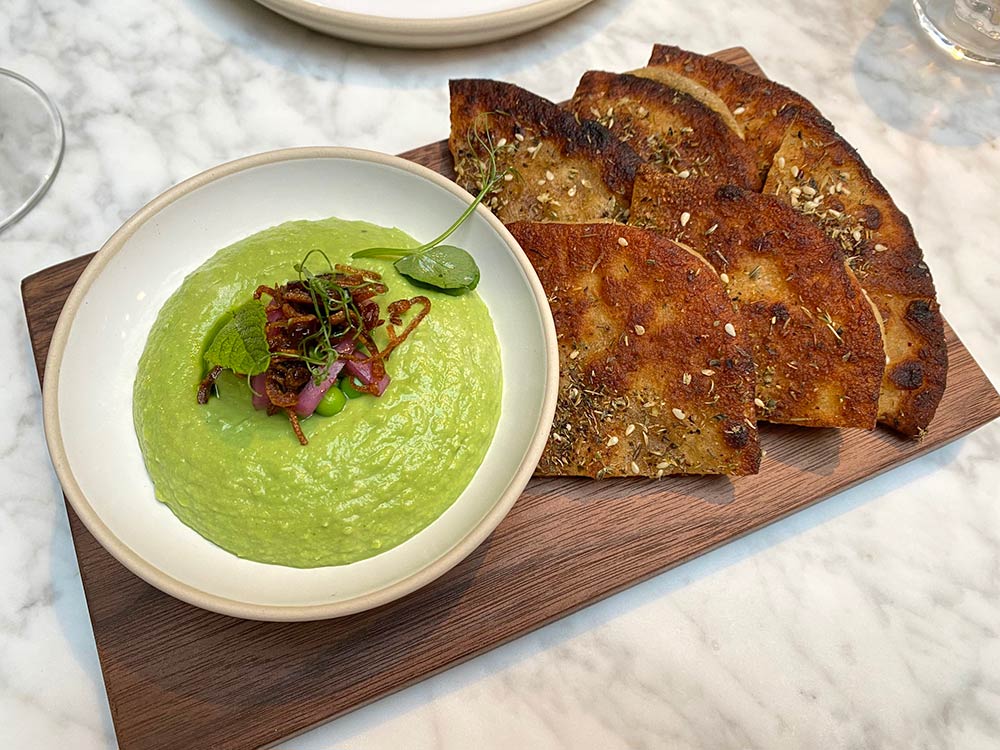 English pea hummus with miso flatbread (£12) - a great twist on the traditional hummus dish and could not have been fresher. 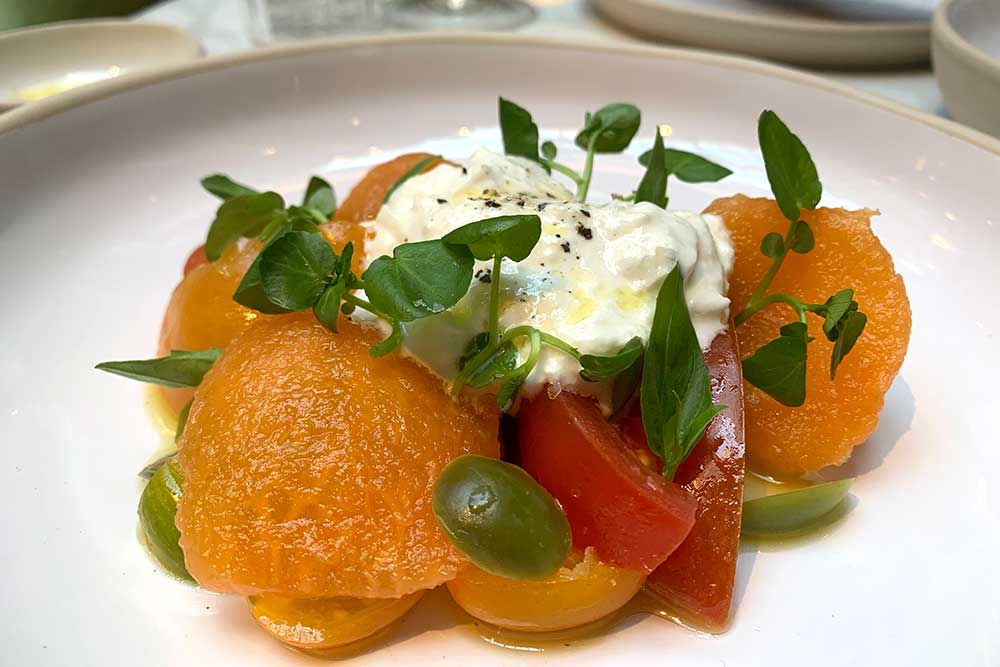 Tomato salad with stracciatella, olives & summer melon (£17) - bursting with the flavours of summer. 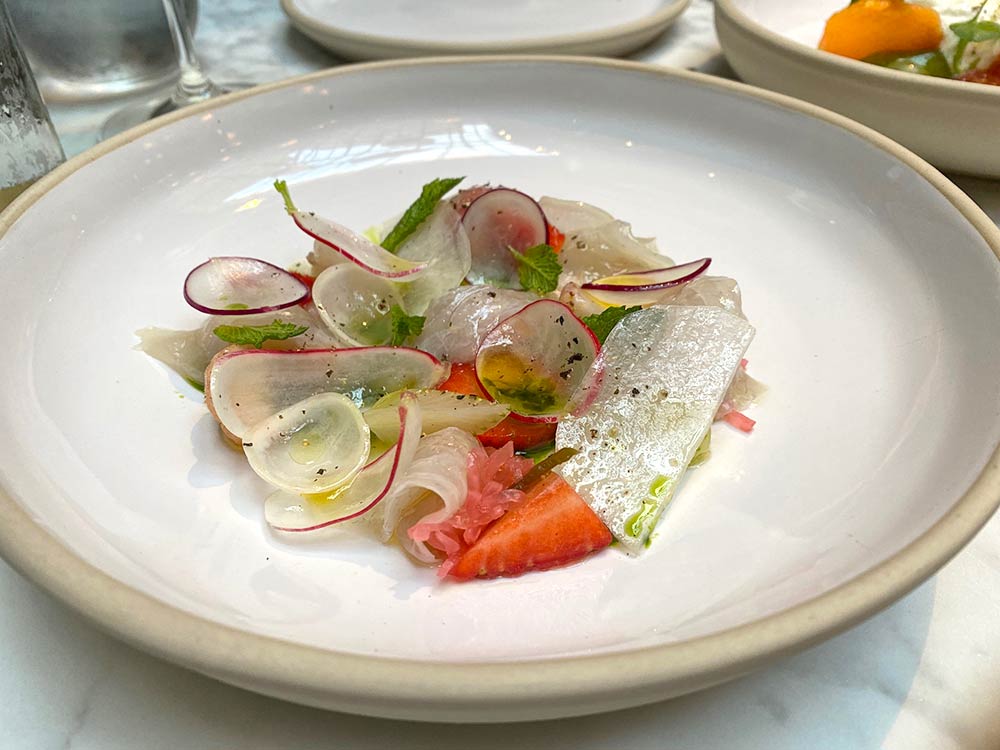 Aside from the aforementioned cocktails, there's also an extensive wine list. It's actually more of a wine book, something that you take a quick look at and realise you need help. We were delighted to spot sommelier Amber Gardner who we met back mid-lockdown in the Bottle wine shop in Highgate, while she was waiting for NoMad to open.

The bar in the atrium also has its own cocktail menu, while the wine starts at around £12-13 a glass.

One of London's biggest new openings post-lockdown, NoMad is an incredibly striking proposition. The whole design of the hotel looks hugely impressive, cocktails are top-notch and that chicken dinner really impresses too. There's already a real buzz to the hotel that will only build as more and more people return to the capital. It's definitely one of the hottest places in town right now.

Hot Dinners ate as guests of NoMad. Prices are correct at the time of writing.