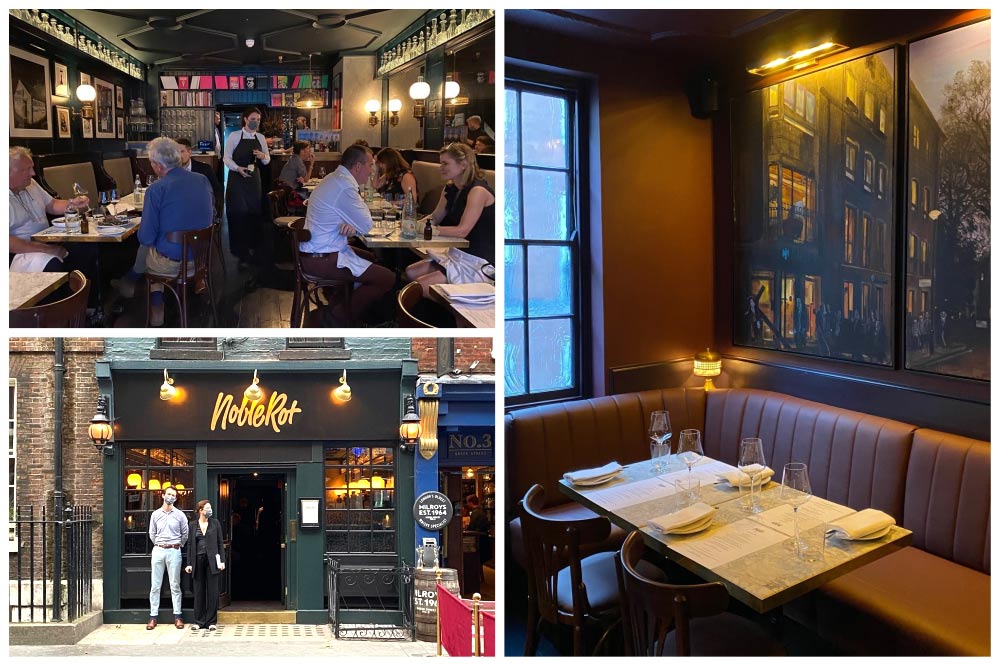 A look at the new Noble Rot Soho

What can you tell us about Noble Rot?

The original Noble Rot opened near Holborn in 2015 bringing the Noble Rot magazine, led by Mark Andrew and Daniel Keeling, into restaurant form. It was an instant hit, mixing up influences from their excecutive chef - The Sportsman's Stephen Harris - with the extensive wine knowledge of the Noble Rot team. It remains one of the best places to eat and drink in London so yes, it's fair to say this second opening has been keenly anticipated.

Where is the new Noble Rot?

It's taken over one of the buildings in Soho which really did deserve the word iconic - the former home of The Gay Hussar on Greek Street in Soho.

The Hungarian restaurant had been in Soho for over 60 years and news of its closing was met with much sadness. But, in fairness, it had lately struggled to match its early glory days and its ending wasn't that unexpected. Still, when news came that Noble Rot was taking over the site, there was renewed hope that the site might become something truly special once again.

And this is primarily a restaurant?

It is for the moment at least with no space yet set aside for just drinking. It's split into two key areas. Downstairs sees two rows of tables split by the central walkway while upstairs is a smaller affair. But the upstairs room is also dominated by two large murals by Soho cartoonist Martin Rowson, which features many well-known Soho denizens if you look closely. If you're looking for a meal away from prying eyes, upstairs is the place to be but if you're after something with more of a buzz, then you want to be downstairs.

Both spaces have an unmistakeable Soho feel with dark wooden panelling throughout. It'll remind fans of the original restaurant while carefully bringing it into the 21st century.

In charge of the kitchen is Alex Jackson, best known for his restaurant Sardine, which became an early casualty of the lockdown. But City Road's loss is definitely Soho's gain as here he's put together a menu that touches on the location's Hungarian history mixed with seasonally changing dishes that Noble Rot is known for.

You can expect the menu, simply split into snacks, small plates/starters, mains and desserts, to shift regularly with the best produce of the moment so it'll definitely reward repeat visits.

We went to an early preview dinner - and here's what we had: 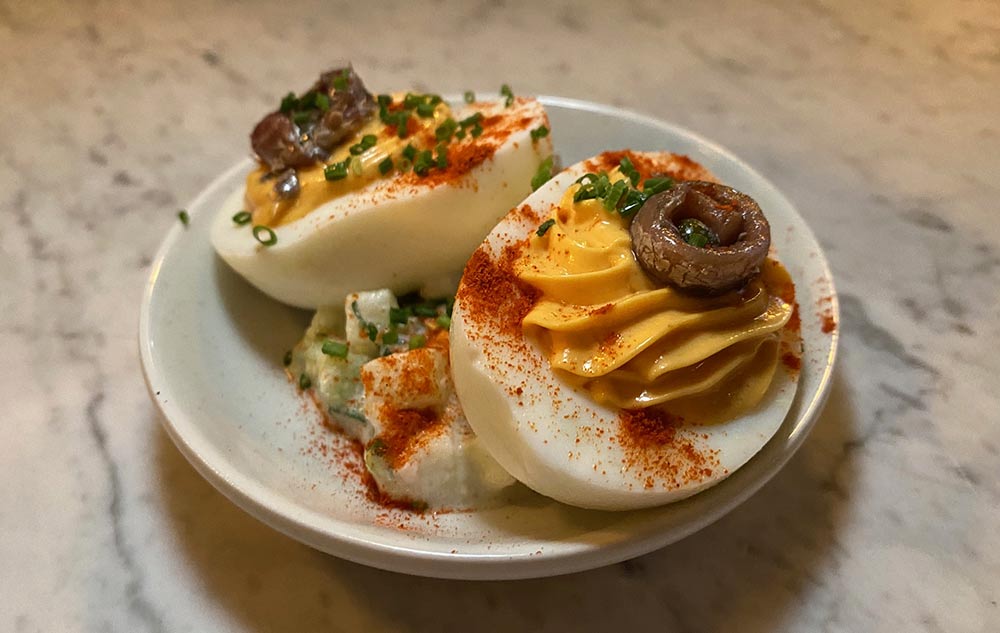 Eggs Casino (£5) - a take on devilled eggs with a very nice chopped salad underneath. 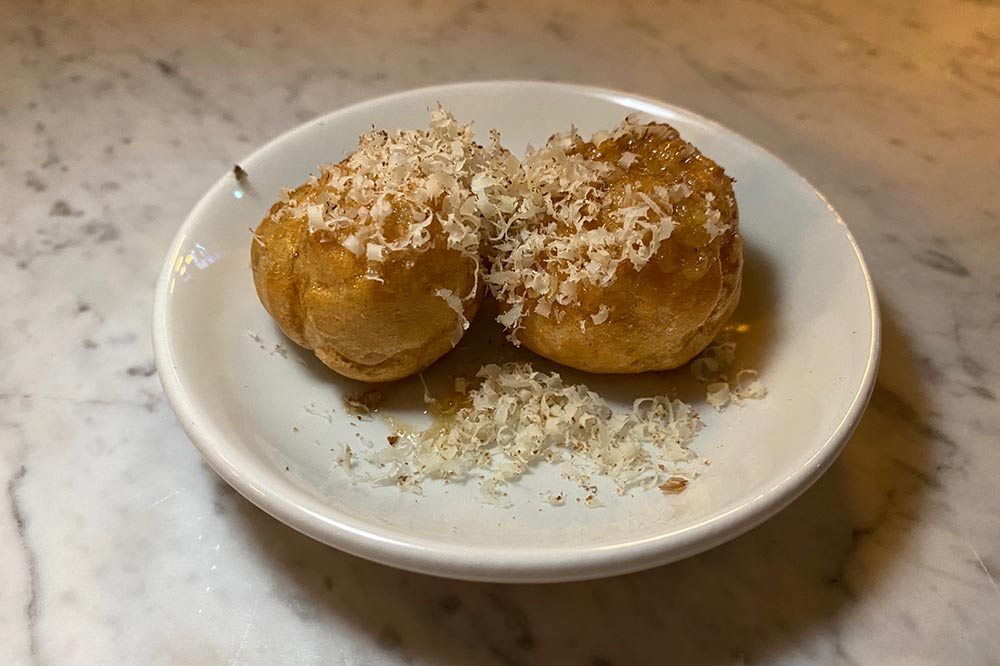 Choux Bun, Duck Liver Parfait & Tokaji Jelly (£3 each) - a one bite treat and the Tokaji jelly is excellent. 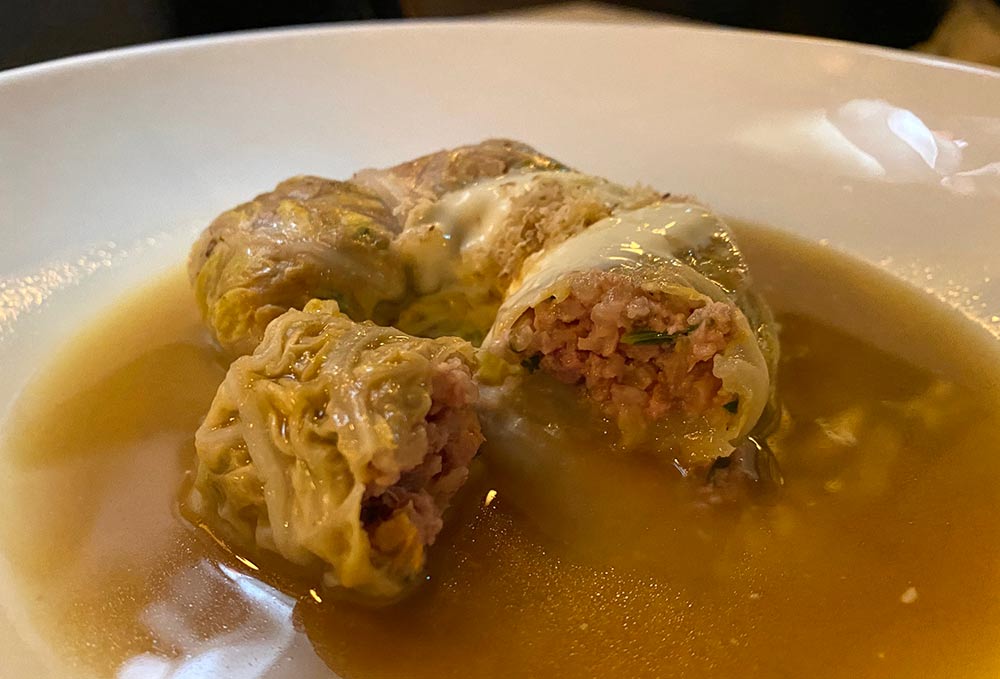 Game Stuffed Cabbage & Sour Cream (£10) - stuffes with grouse, pork, mushrooms and rice - then cooked in a game stock, and finished with sour cream and chestnuts.Very much of the season 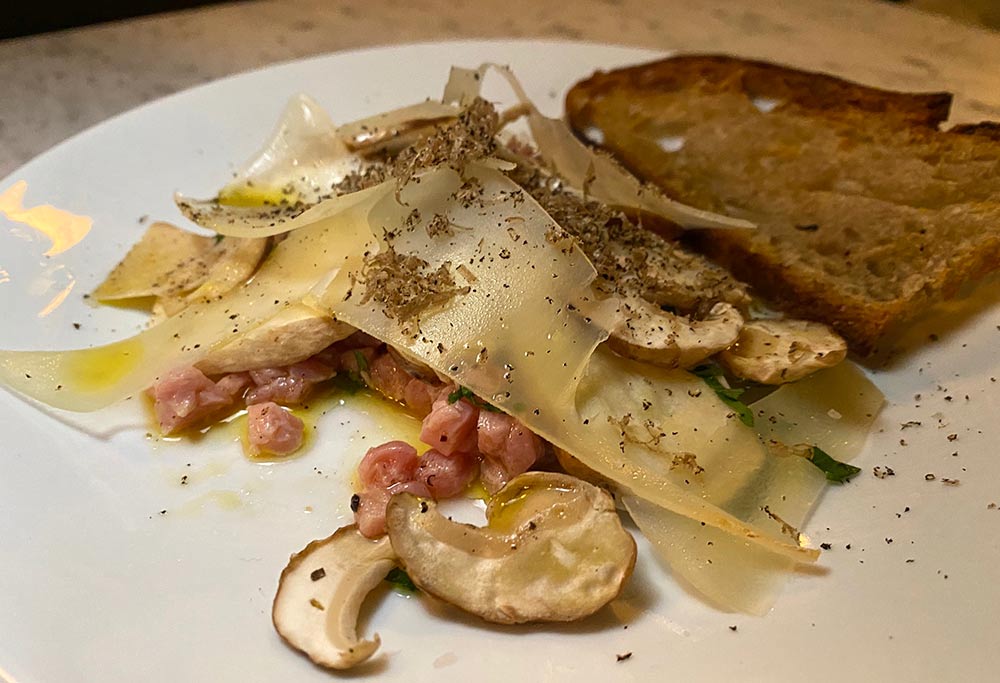 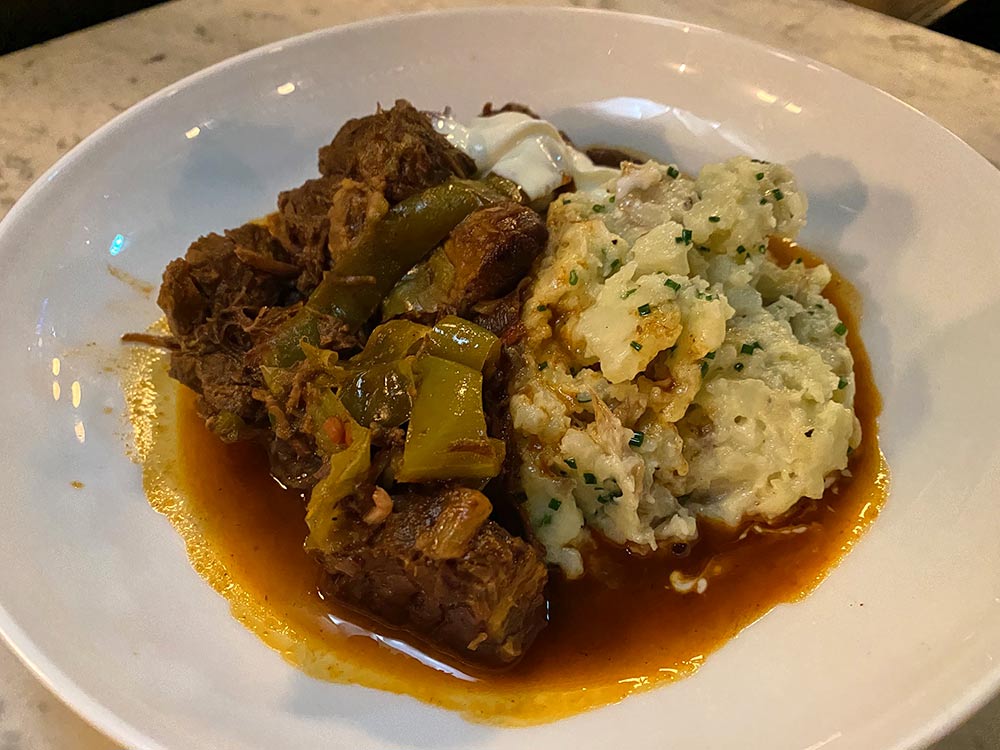 Swaledale Beef Shin Goulash 'Gay Hussar' (£20) - the main dish that calls back to the history of the site, this was a frankly excellent goulash - just about one of the most perfect beef stews we've had. Heading into Autumn's cooler climate, this ought to be a huge hit. The crushed potatoes that it came with were also very, VERY good. 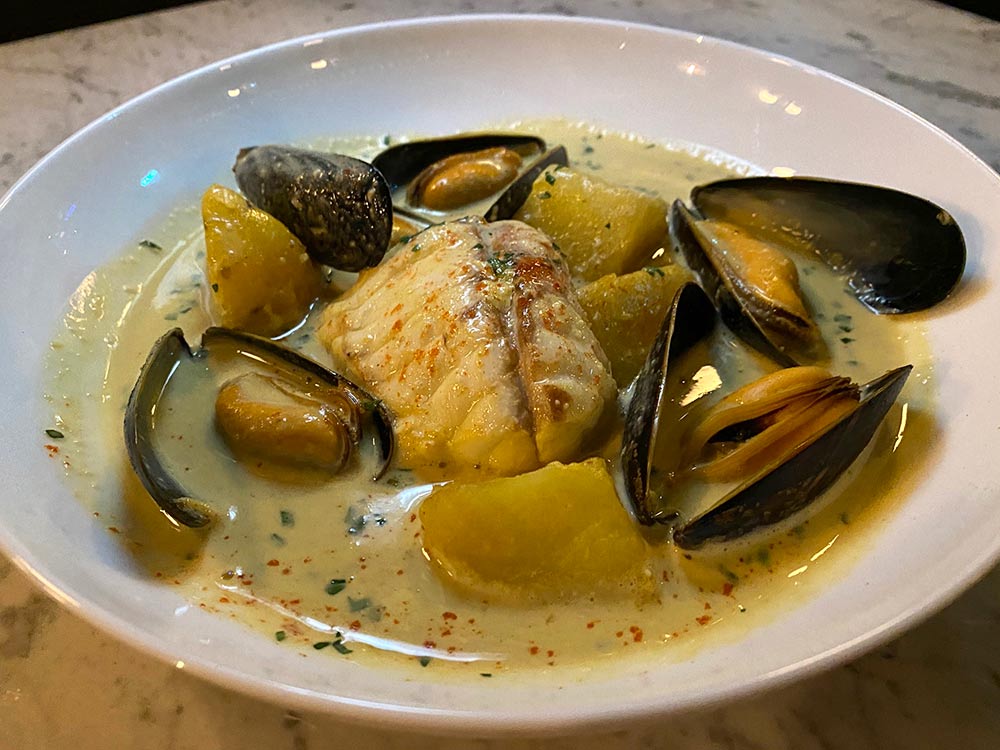 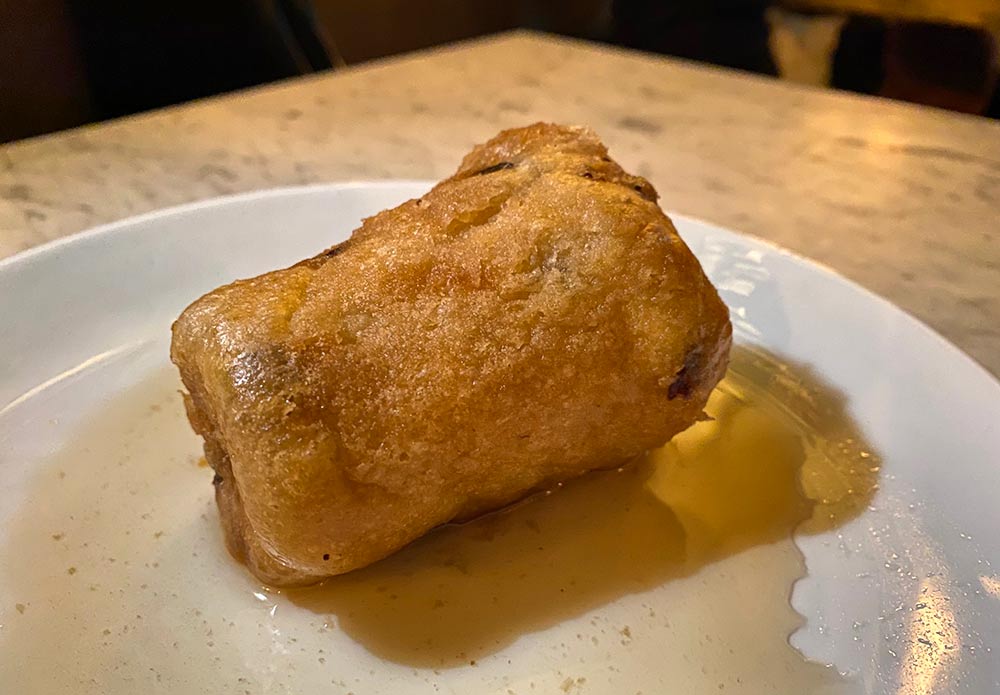 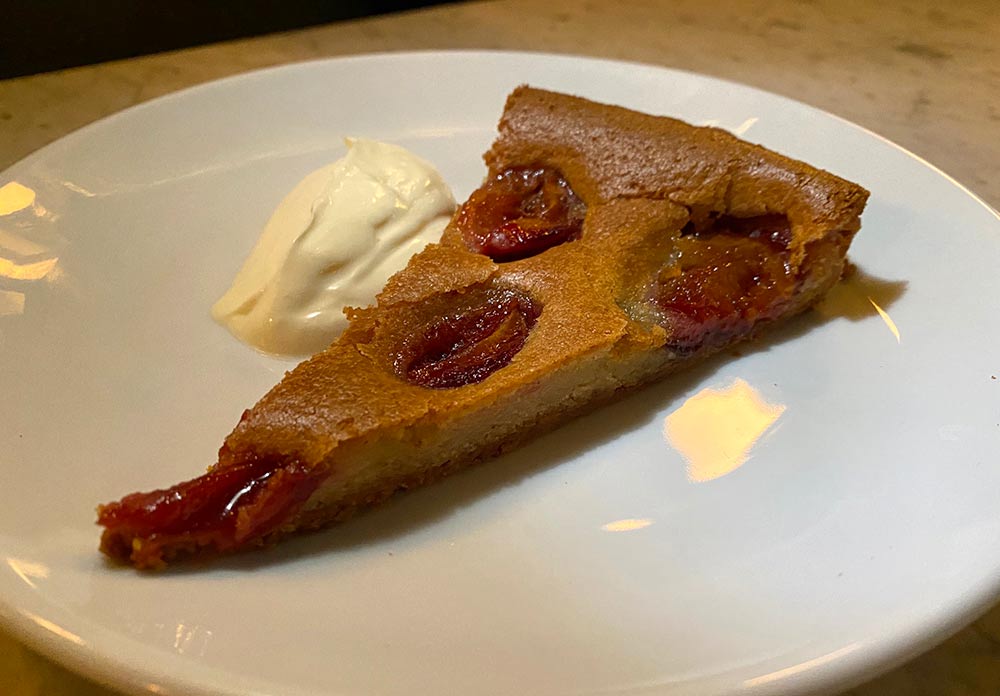 Plum & Brown Butter Tart, Crème Fraîche (£9) - a very good tart, but one which reminded that in our humble opinion almost all tarts are better with cream rather than creme fraiche.

There's also a large sharing dish. At the time of writing, that's roast chicken, with morels & vin jaune, riz au pilaf - for 2-3 people at £70 (and we've heard very good things about that).

As with the original restaurant, there is a set lunch which is two courses for £18, three for £22. That currently features dishes like "Salt Cod Salad Basquaise" and "Fig Leaf Panna Cotta & Strawberries".

Given that it's Noble Rot, the wine is clearly just as important as the food. There's a large by-the-glass list which kicks off at £25 a bottle for the house red (Gran Cerdo rioja) and white (Chin Chin Vinho Verde) - which is extremely good value for Soho. There's plenty to choose from for all ranges, heading upwards to the £60 mark on this menu (for red/white Burgundys). The wines are also available as 75ml tasters, if you really fancy roaming around the list - from £3 to £10 a glass.

The main wine list is obviously much more extensive and broken down by grapes, so it's much easier to find something for your taste. While there are plenty of bottles at the lower end, for the largest choice you're looking at the £40-£60 mark and at the very high end, it's £675 for a Pichon Lalande, Pauillac; Bordeaux, 1982. Simply put, you'll find something for any budget here. As with the original Noble Rot, you'll gain a great deal if you let them guide you (within a price range, of course).

This new Noble Rot has been easily one of the most anticipated restaurants of what will be a very challenging autumn for everyone. So it's incredibly pleasing that it's turned out so wonderfully. It looks fantastic, feeling both very Soho and very Noble Rot at the same time. The food is extremely good - there's still so much we haven't explored on the menu - and it all comes with a carefully selected wine list that also represents great value.

Put simply, if you're looking for a restaurant that will comfort you in these tricky times, you'll find it hard to do better than Noble Rot's successful second album.