So what do we need to know about Mortimer House Kitchen?

This ground floor restaurant of the Mortimer House club (upstairs is members-only but this is open to the public) has just been joined by This March, chef Lello Favuzzi. The reason that should put it on your radar is that Lello was previously head chef of L'anima - the very well regarded City Italian which closed last year. Lello's spent some of the intervening time travelling, being inspired in particular by Middle Eastern cuisine, before returning to London.

You'll find it half way along Mortimer Street on the junction of Wells Street. Tube-wise it's an easy walk to either Goodge Street or Oxford Circus stations.

You're not far from Percy & Founders which has a decent sized bar and lounge, and there's always The Social nearby for cocktails. But actually there's a pretty decent sized bar here and we rather liked the entire page given over to less boozy cocktails. 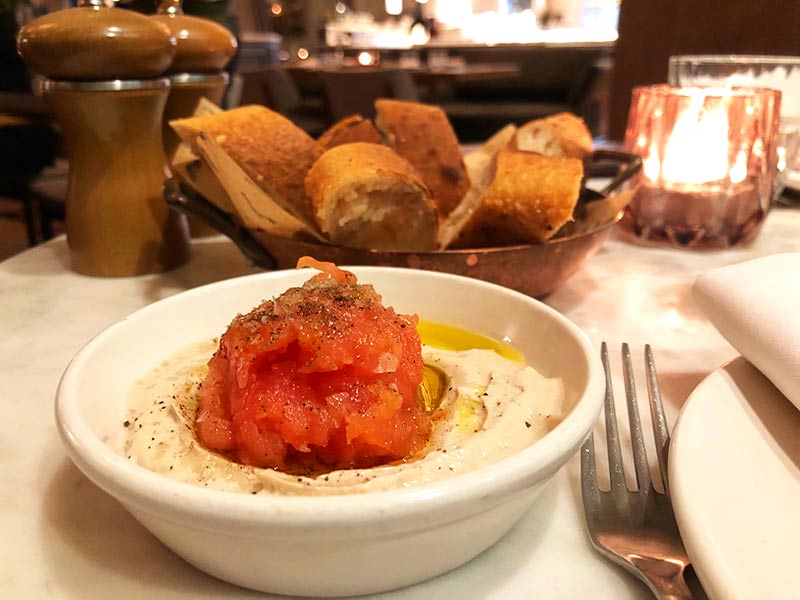 Tahini, crushed tomatoes and super olive oil, served with bread (£4). Order this as soon as you sit down. You won't be sorry.

The dining room here reminded us of the one at Bernardi's, so it's a corner site filled with light. There are some nice larger tables for groups - and the conservatory section seemed particularly pretty, but was booked out for a private event so we didn't get that close a look.

So, what kind of menu is it? Italian?

Yes and no. Obviously, given the chef's background, there are a lot of Italian dishes but there's also an emphasis on food inspired by Lello's recent travels to Tel Aviv. So the bread comes with a dish of smooth tahini, crushed tomatoes and super olive oil - it was actually pretty hard not to say 'Bring us 10 more of these'.

The menu's split into small, medium and large plates. Here's what we had: 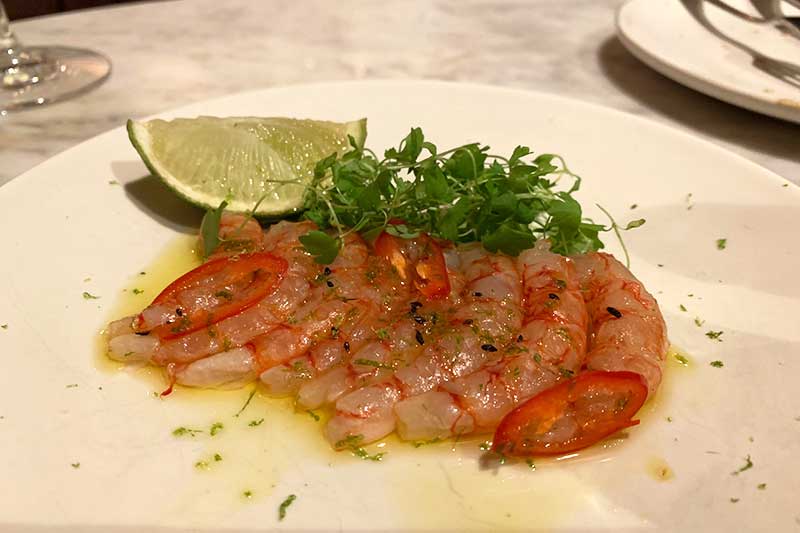 Mazara prawns crudo with celery cress and chilli (£12) - Sicilian red prawns that the kitchen, rightly, didn't mess around too much with, adding the cress and chilli for spice and a bit of heat.

Red Hereford beef carpaccio with black truffle, Grana Padano and pickles (£16) - because who doesn't love a nice bit of carpaccio, particularly when the beef is this good? 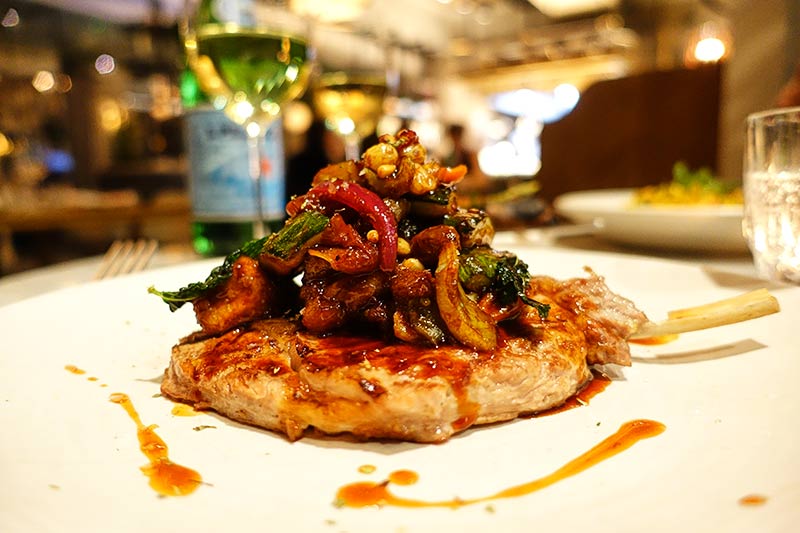 Grilled veal cutlet piled high with Sicilian vegetable caponata (£28) -  no need to add any sides on, this is extremely filling (and carb-free too) with a rich sauce. Pretty generous veal cutlet too. 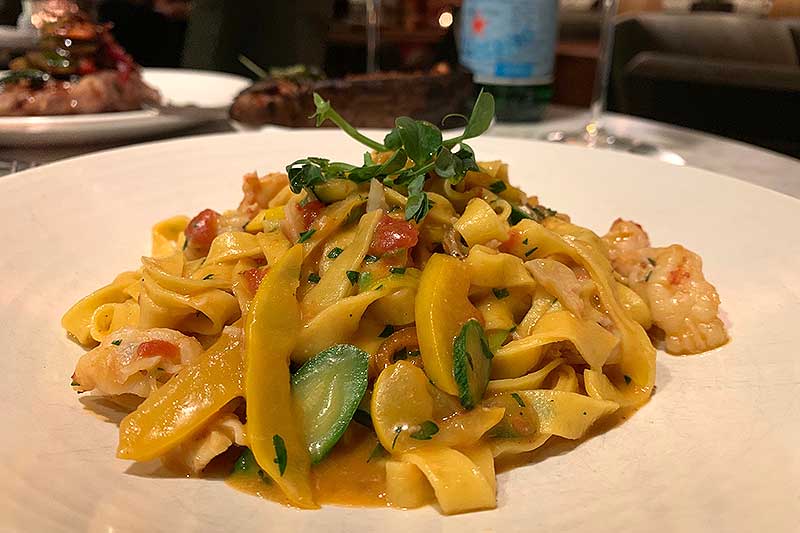 Homemade tagliatelle with prawns, courgette flowers and courgettes (£21) - served in a sauce that could only have been given its intensity with some prawn-head stock. Wonderful.

Cheese-less 'cheesecake' made with almond, dates, carrots and orange (£8) - the only duff note in our meal. Apparently, vegan customers have been going wild for this, but we'd have much preferred the real dairy-laden deal. Tiramisu with almond and chocolate crisp (£6) - perfect tiramisu, made even better with the addition of those brittle crisps.

Plenty. Every section had at least one veggie and one vegan dish and if you're Pescatarian then almost the entire menu is open to you. Here are a couple of veggie dishes that we really rated: 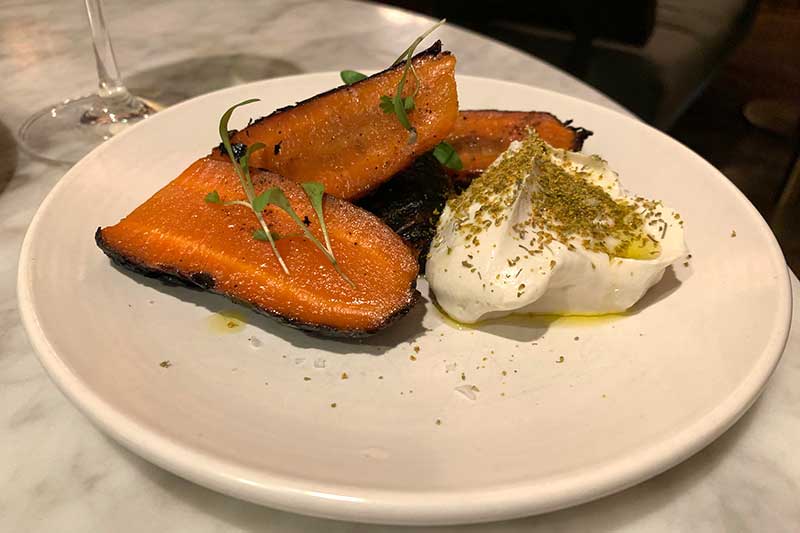 Burnt carrots with Greek yoghurt, tahini and fennel pollen (£7) - a veggie treat with the carrots roasted into sweet submission. 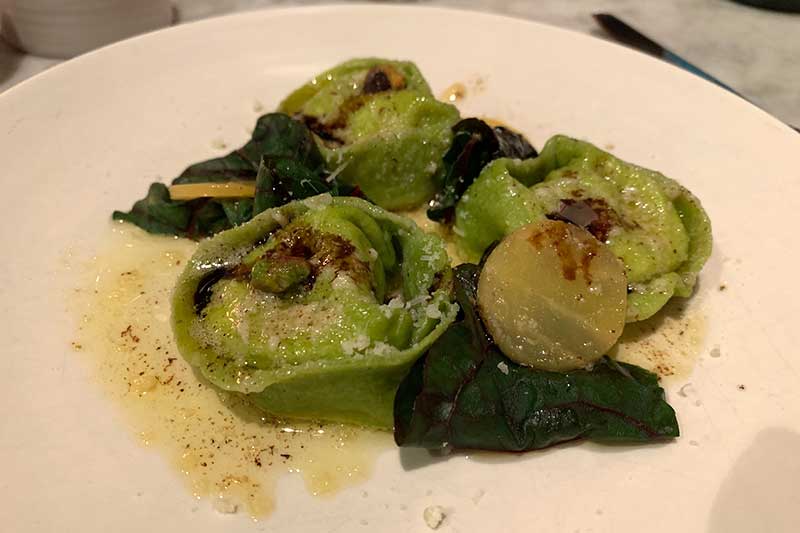 There's a truncated wine list on the back of the menu, but there was a much wider choice in the full wine list, particularly if you're after something a little less punchy price-wise. Our waiter picked out a Chablis which at £11 a glass was perfectly nice, but there were lots more interesting Italian wines on the list that maybe we should have tried instead.

Price wise there are about 10 to choose from before you head into the £40 and upwards bracket. And it's nice to see some options to have some of the more expensive wines - like the 2014 Antolini Moropio Amarone - available by the glass too.

Mortimer House Kitchen was so nice it seriously made us think about club membership. It's a really nicely designed space - and we appreciated the clever acoustic ceiling panels which made this a buzzy room where you could still have a quiet conversation in. Chef Lello's clearly enjoying bringing the inspiration from his travels to the plate and if you missed trying his food at l'anima, then this is your opportunity to fix that.

Where is it? Mortimer House, Mortimer Street, W1T 3JH