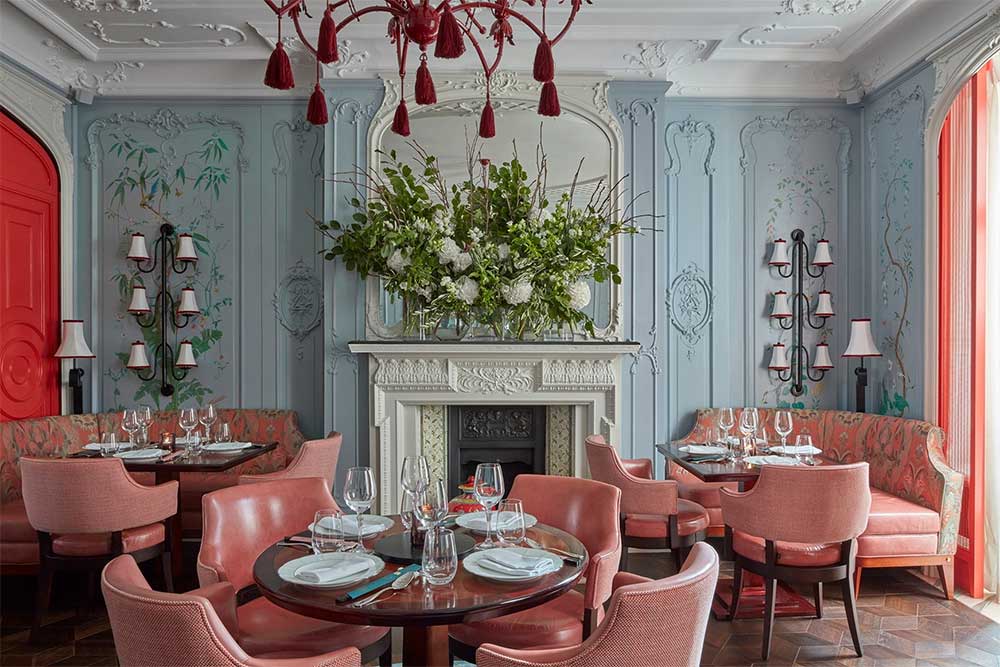 The Parlour upstairs - this would be particularly lovely at lunchtime.

What do we need to know about Mimi Mei Fair?

Let's start with who's behind it first. That would be Samyukta Nair, the restaurateur who brought us Jamavar and Bombay Bustle. With her latest Mayfair restaurant, she wants to take Londoners on a journey to 1920s Shanghai.

You'll find the three-floored restaurant on Curzon Street between Bolton and Clarges Street. The nearest tube is Green Park, but judging on the clientele here we may have been the only ones taking public transport to get here.

This is actually a more complicated question than you might imagine. As the restaurant is actually comprised of two Georgian townhouses sandwiched together, there's a warren of intertwined dining rooms, all of which are very different in style.

On the ground floor, as you enter, is The Hall - a narrow room which, in less talented hands than their designer, would be the room you definitely wouldn't want to dine in. But here the narrow space has been transformed into what looks to be a carriage on the Orient Express with individual booths for two and four (it's apparently supposed to be inspired by Wong Kar Wai's films).

Off to the left of this is the timber-panelled Drawing Room which leads through to the private dining room. Upstairs are a further two dining rooms - the emerald green Library, and the Parlour which is rather beautiful with hand-painted walls (and which was where we were).

What about a drink first?

If you can manage to nab a table, there's the diminutive but very pretty Moon Bar downstairs. There's room for three small groups to drink down here - so it's more of a space to grab a drink pre or post-dinner, than to linger for long. But the cocktails are excellent so it's worth a try. 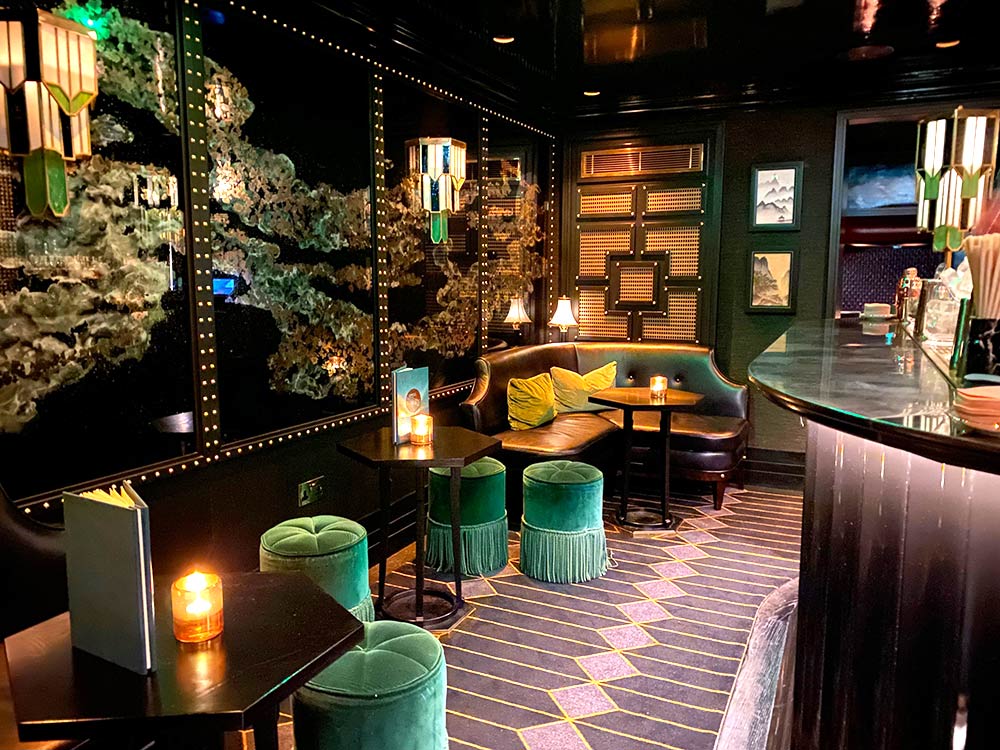 The Moon Bar - a hidden away bar in the basement that's worth seeking out. 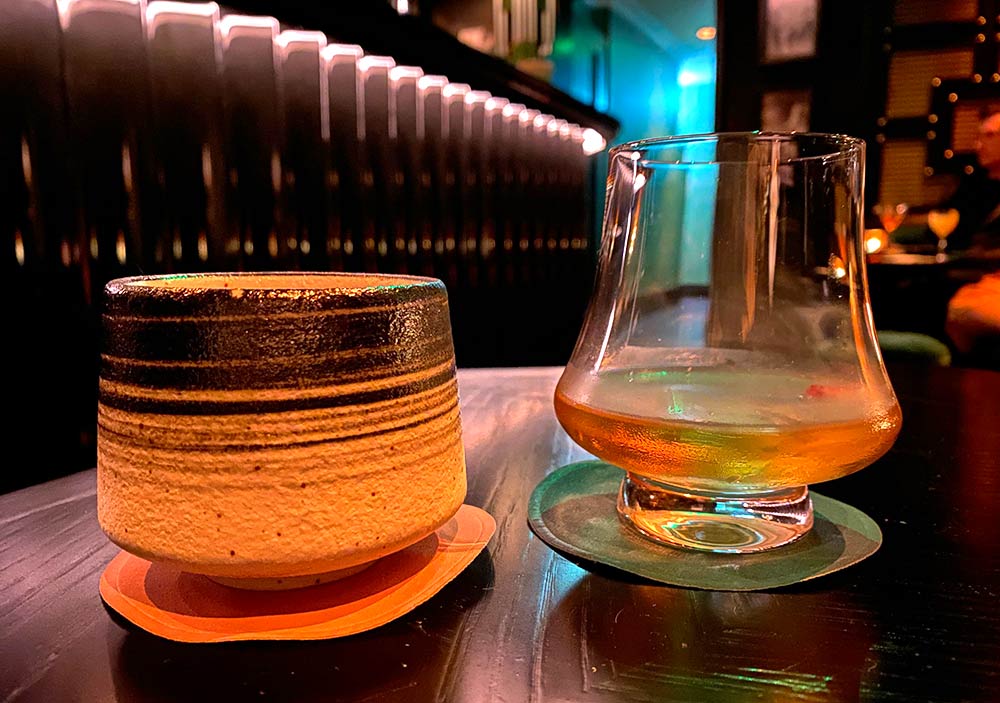 Chinese-Singaporean Chef Peter Ho (formerly HKK and Hakkasan London) is in charge of the contemporary Cantonese menu here. Here's what we had: 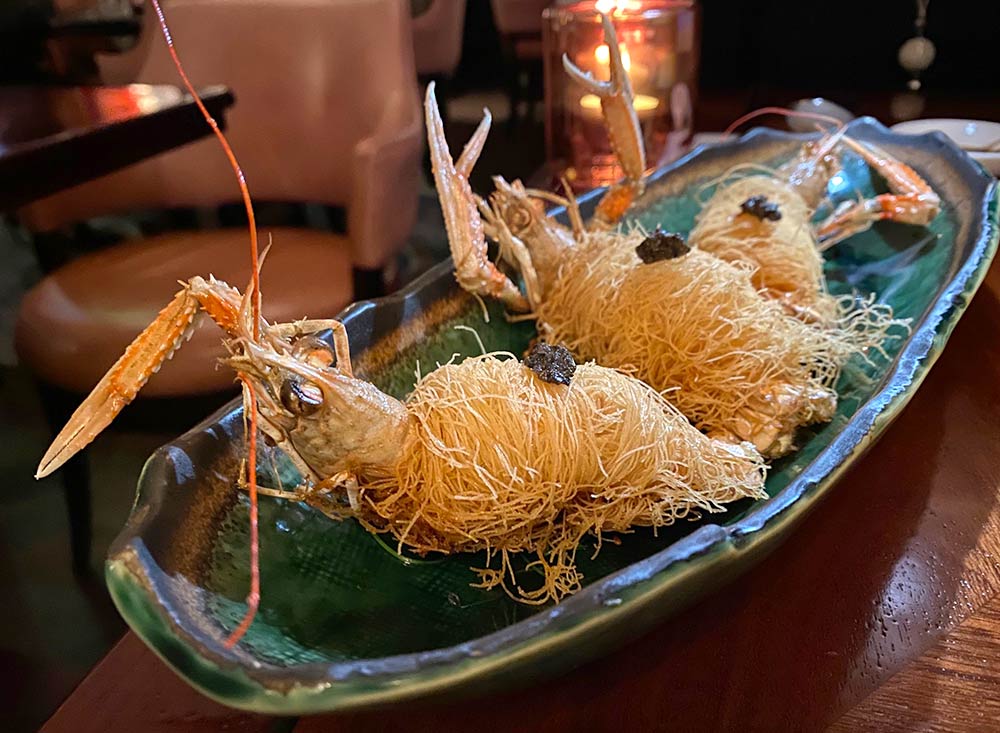 Crispy Golden langoustine with the teeniest bit of périgord truffle (£22) - there was an unseemly fight at our table over who got the third one. These were delicious. 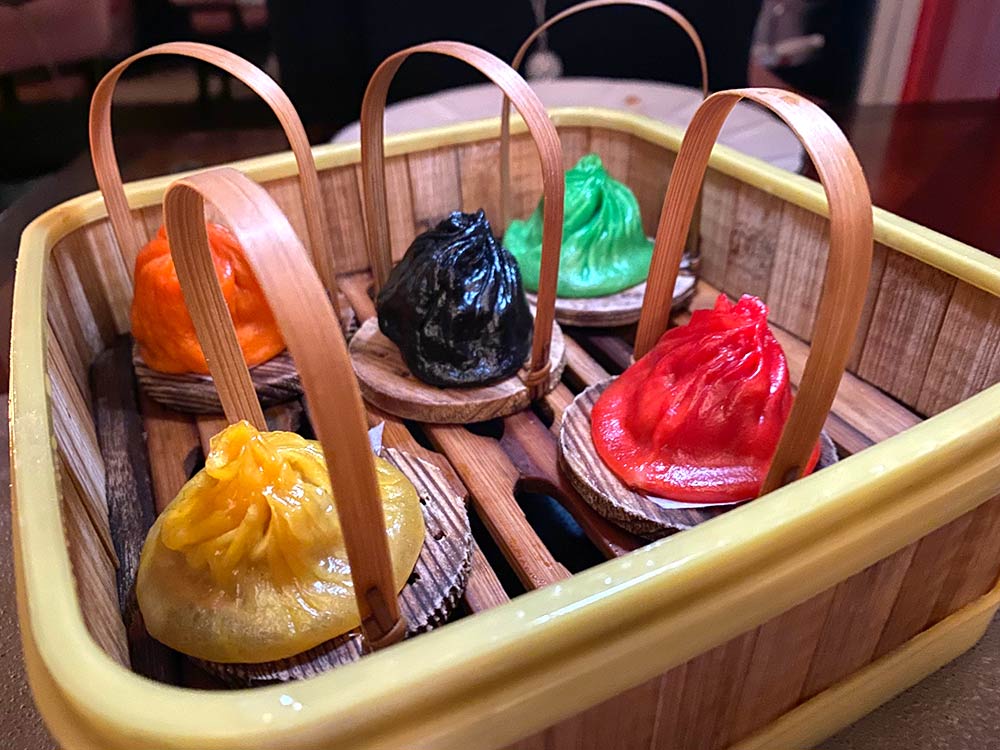 Xiao long jewels - a rainbow-hued selection of dumplings including chicken, chilli crab, king prawn, purple yam & pork soup (£20). But don't take too long before eating these or you'll find they rip from those cute little containers and you lose the soup (sob!).

But then we come to the main event - the duck. And it really is quite the spectacular set-piece if you order it. 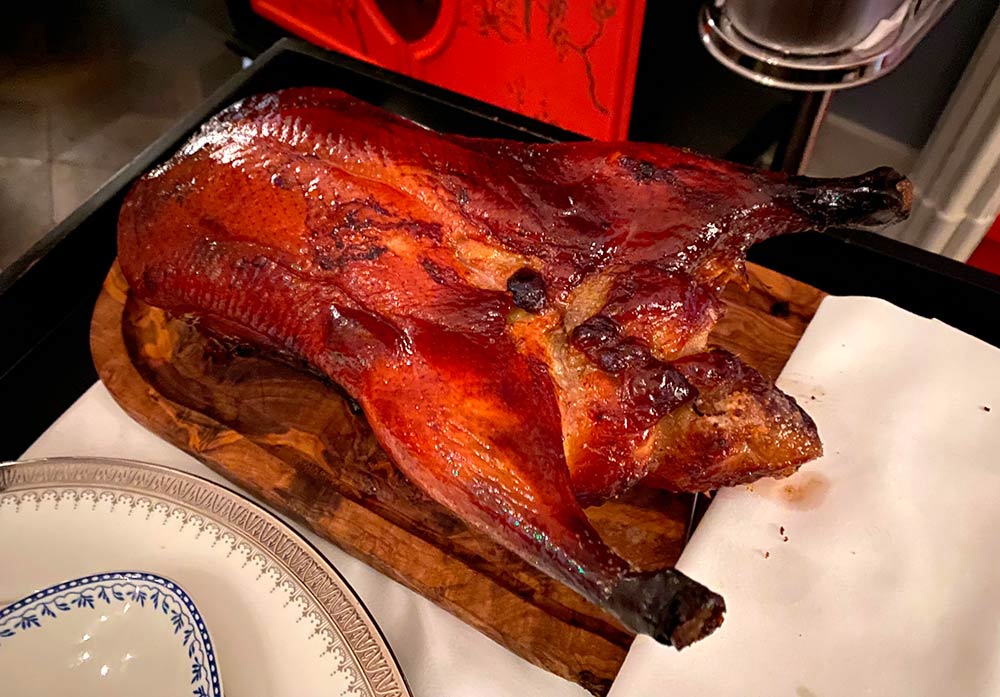 Traditional applewood roasted Peking duck with homemade pancakes (£88). That might seem pricey, but it compares to £76 at Hutong and £98 at Park Chinois so it's ballpark for this kind of high-end spot. It's the kind of dish that definitely rewards you being a table of four or more. We had it between two and were too full to try anything else. 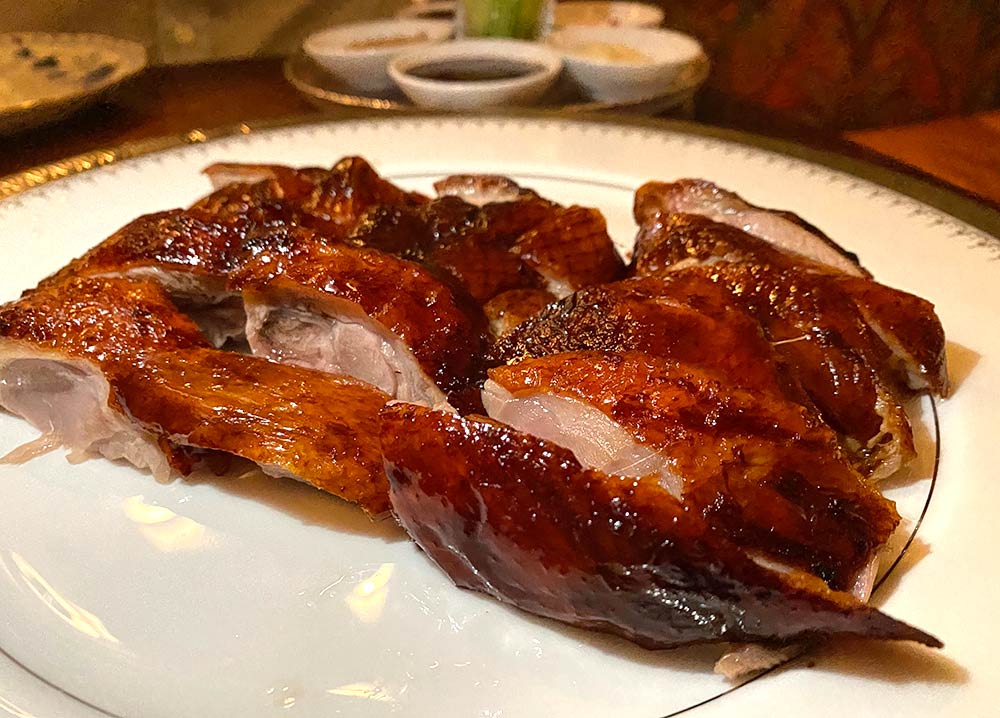 After being expertly carved tableside it's served with a raft of condiments including radishes, garlic, chilli oil and, of course, plum sauce. 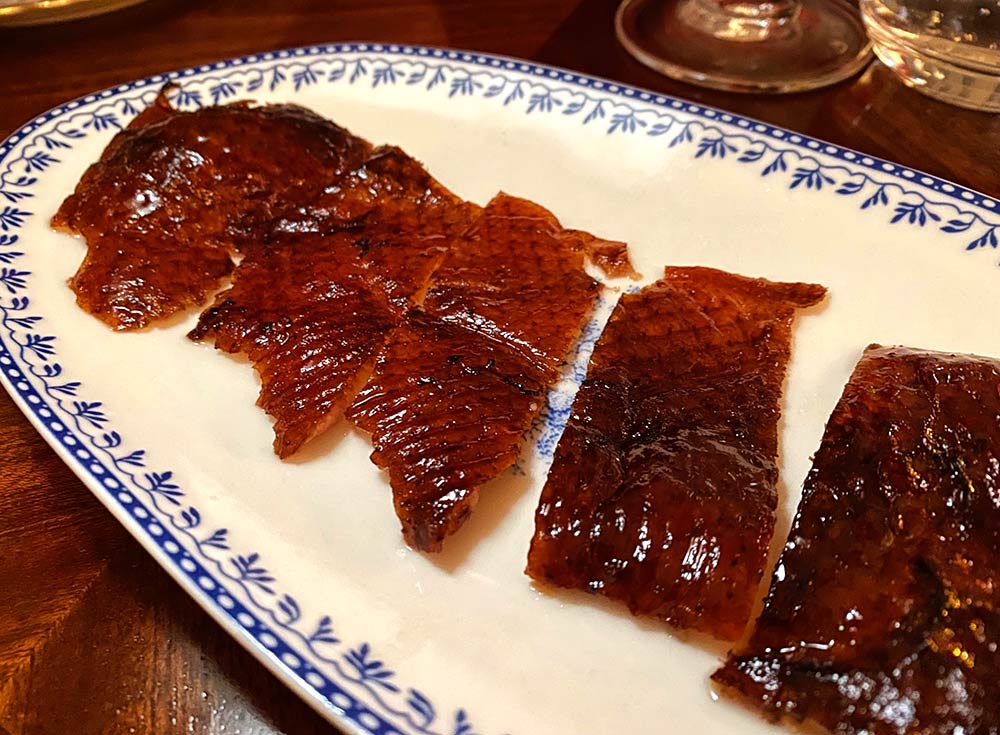 The waistline-challenging course of the duck skin to be dipped in brown sugar. Heaven. Just don't think of the calories.

We hear good things about the Steamed XO okra with shallot and enoki mushroom crumble, while there's plenty of veggie options generally. But you must order this too. 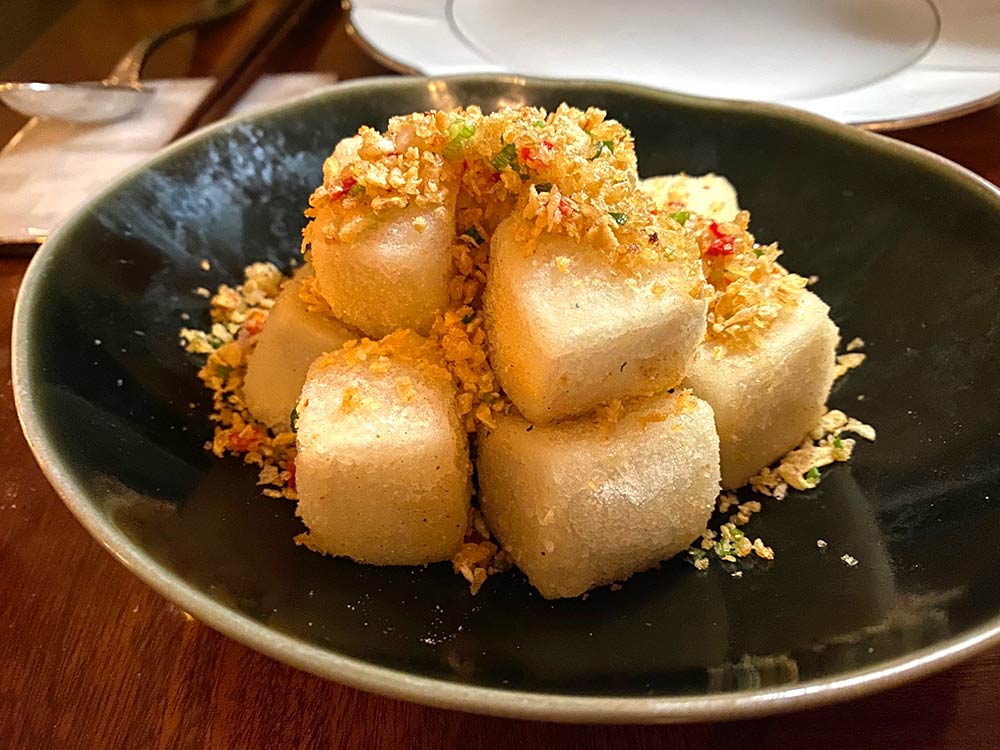 That depends on whether you're having the duck or not. We just about managed the chocolate option, but with hindsight might have opted for the Coco-Mango Vegan Sundae. 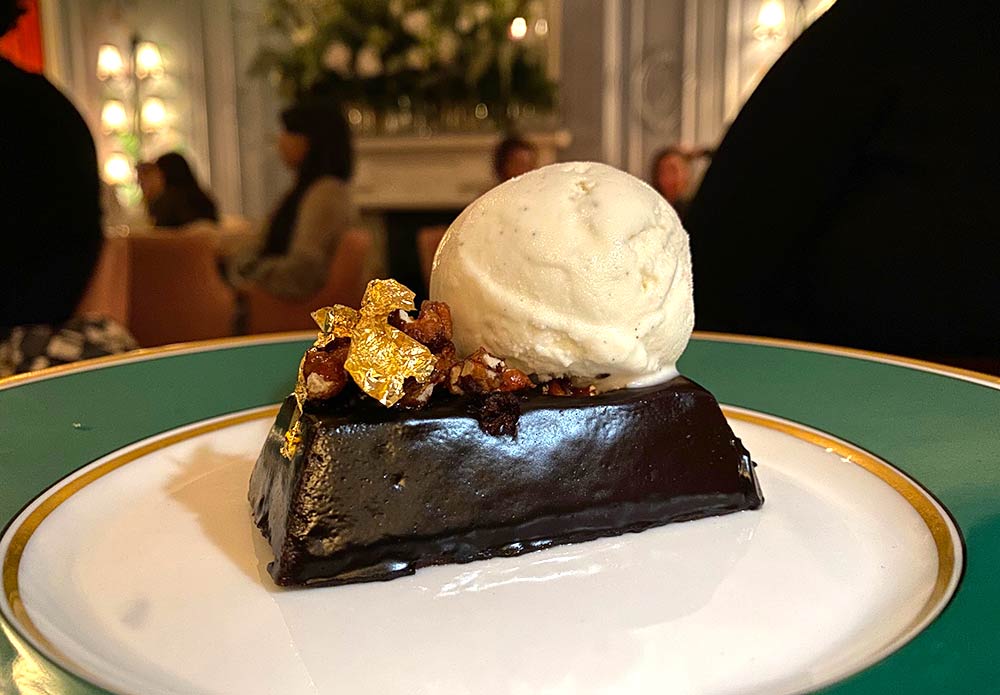 There's a wide selection of sparkling wines and Champagnes including cult UK fizz Dermot Sugrue's 'The Trouble with Dreams'. As you might deduce from a restaurant in this part of Mayfair, the wine list is punchy with entry-level in the late £50s. Our 2019 Mersault from Domaine Michel Dupont-Fahn was wonderful, but it was also £117.

With not a single free table on a Tuesday night, clearly Mimi Mey Fair is doing something right. Ah, that's it - it's fun. From the opulent decor and 1920s music, through to the food, this is the very definition of a great date night place. Just make sure you've got someone who loves you enough to foot the bill.

Where is it? 55 Curzon Street, Mayfair, London W1J 8PG

Hot Dinners dined as guests of Mimi Mei Fair. Prices correct at the time of publication.