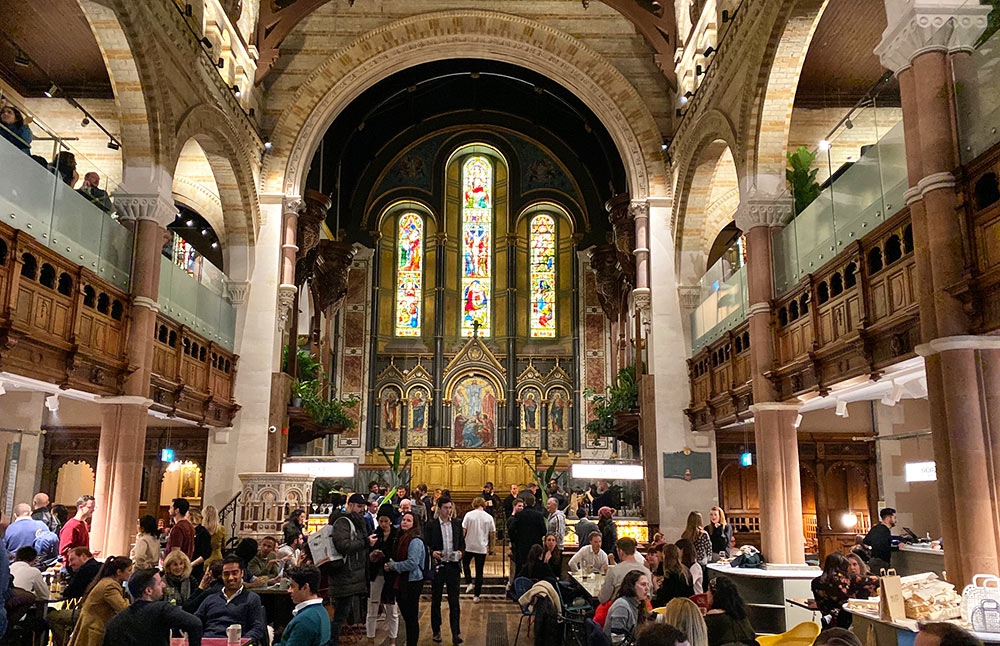 Looking into Mercato Mayfair from the entrance. Yes, it IS impressive.

So what do we need to know about Mercato Mayfair

It's the second huge market from the same folk who opened Mercato Metropolitano in Elephant & Castle - and both markets have a particular Italian feel to them.

They've taken over the awesome (in the true sense of the word) building that is St Mark’s on North Audley Street in North Mayfair. The Grade I building used to be known as the ‘American Church’ as it was just around the corner from the US Embassy and President Eisenhower and Eleanor Roosevelt both attended services there. But it was deconsecrated in the 70s and only recently had a £5m restoration to bring it back to its former glory. It looks amazing.

A food hall in a church? That sounds a bit odd.

You'd think so and it does take a little getting used to ordering a G&T on the altar but you quickly get used to your surroundings.

As with most food halls you generally head to the trader whose food or drink you fancy and order. They'll then give you a buzzer to take away which will alert you when your dish is cooked. There's also one sit-down restaurant with table service.

There are several different components to the market - so let's break it down starting from the bottom up. 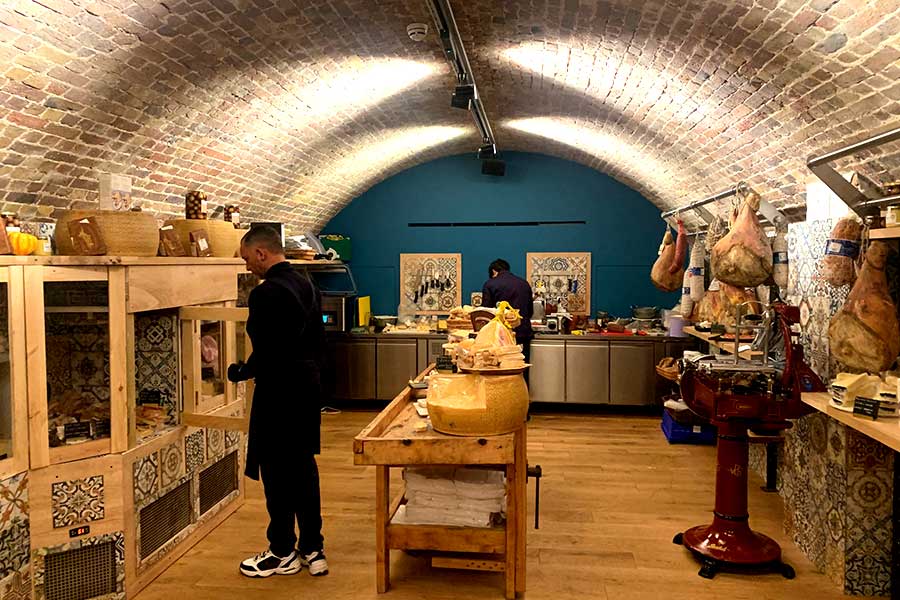 In the basement, you'll find a gorgeous vaulted ceiling cellar which turns out to be the perfect place for a wine bar and a cheese and charcuterie section. There are currently around 60-70 wines by the bottle (and plenty by the glass) with the intention to build on the list of almost exclusively Italian wines. There's also going to be a community space down here too.

The entrance, nave and altar 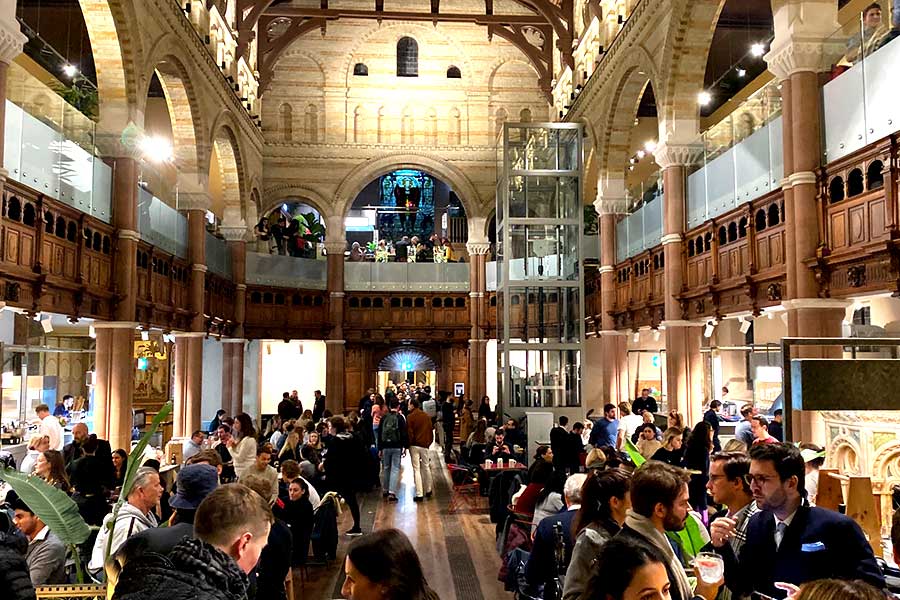 On the ground floor as you enter (it's just through that door at the back) is a grocery. It's intended to offer affordable, seasonal produce but, this being Mayfair, that means you'll find gorgeous heritage tomatoes, sourdough bread, top-quality olive oil, those very moreish chorizo thins, wines and more. 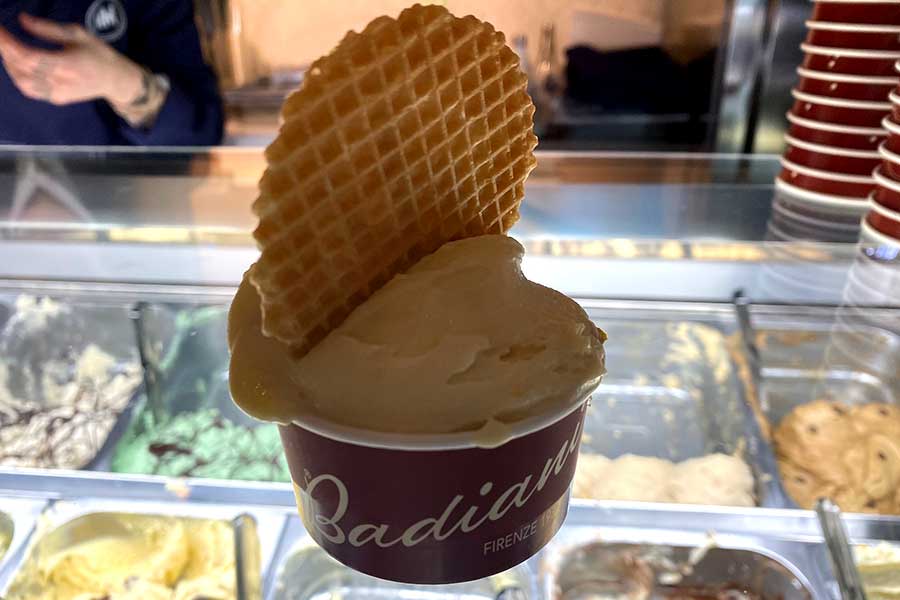 In the main body of the church there are four food traders. Fresco does Neapolitan pizza, Pasta London does - you guessed it - handmade pasta, there's Sushi and poke bowls from Rawbar Mayfair and all manner of sweet treats from Badiani - their pistachio gelato was very, very good. 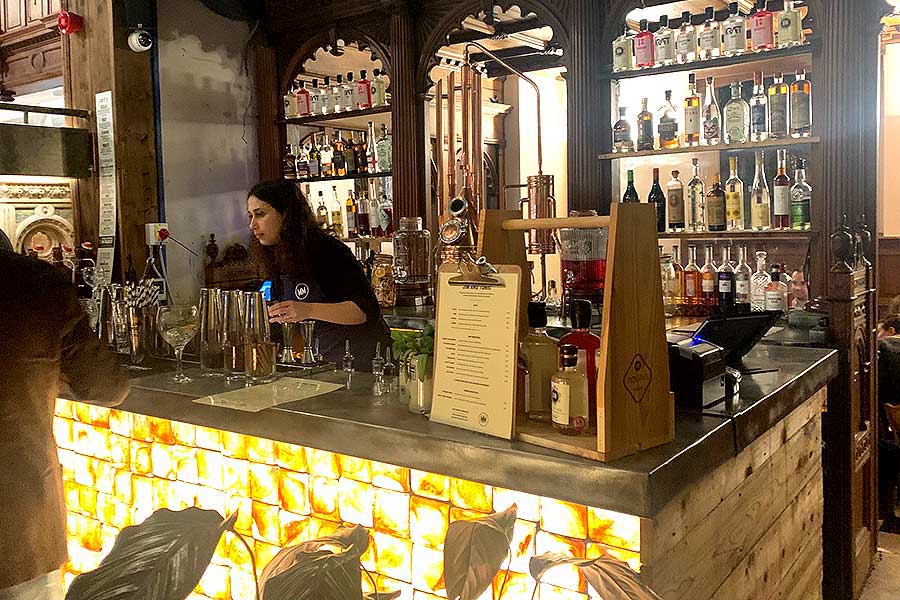 The altar features two bars - Jim and Tonic serve up a variety of gin cocktails while the German Kraft Brewery team are selling the same beer you'll find at the market in Elephant & Castle. There are plans too to set up a microbrewery in the cellar here too. 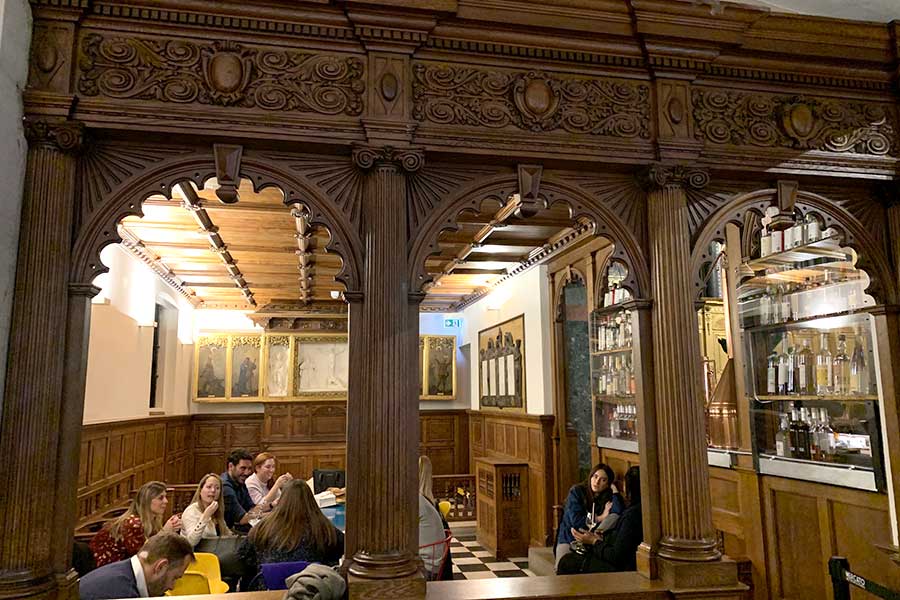 There's plenty of communal seating in the nave, but we particularly liked the seating either side of the altar in the side chapels. 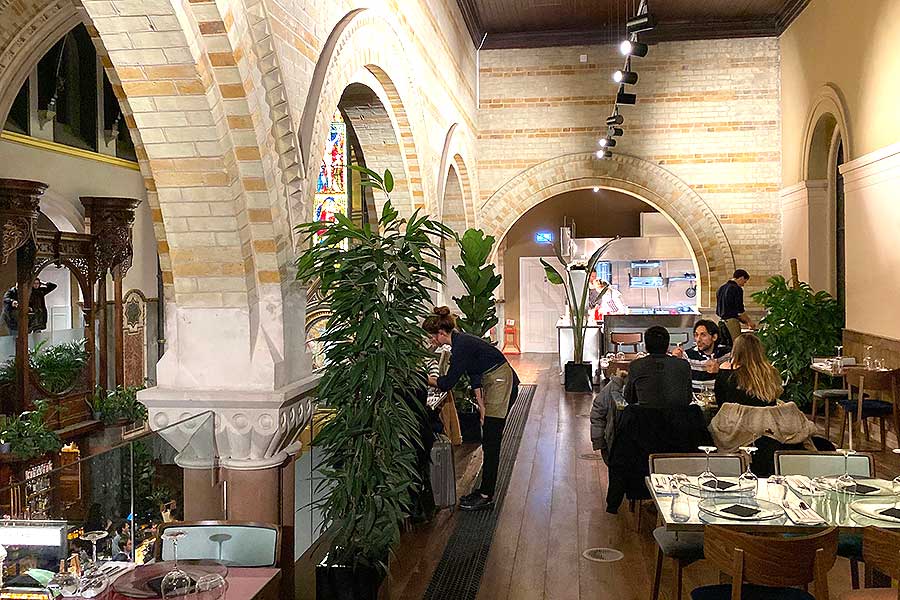 On the gallery level, there are a further six places to get food from. Steamy & Co are there with their Bao & dumplings, Molo offers seafood buns and robata and there's a standalone restaurant Lala serving up Turkish food. 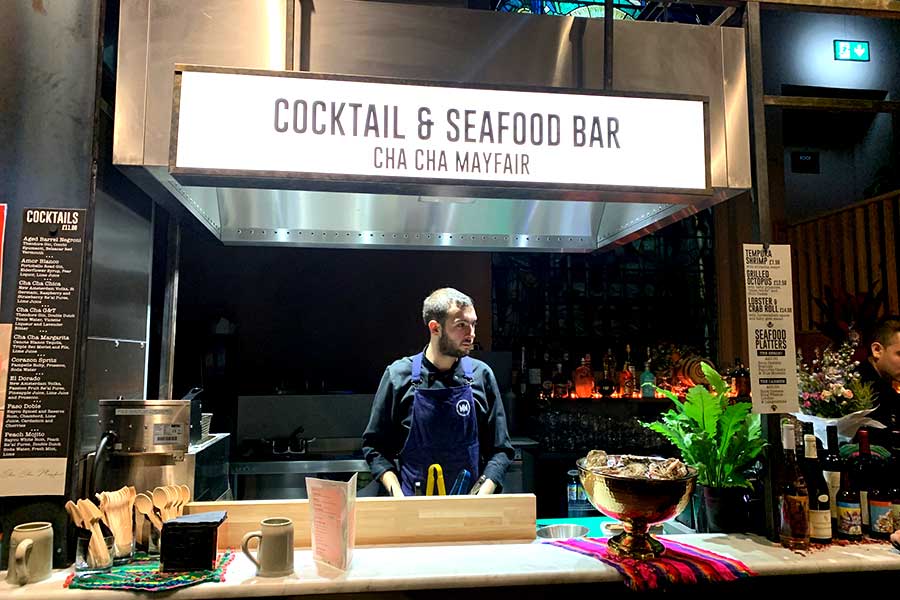 Cha Cha Mayfair serves up a mix of cocktails and seafood, including lobster and crab roll (£14.50), seafood platters - the Sergio at £20 is a mix of oysters, scallops, Palourde clams and blue mussels. We went for the tempura shrimp (£7.50) which came with sriracha mayo. 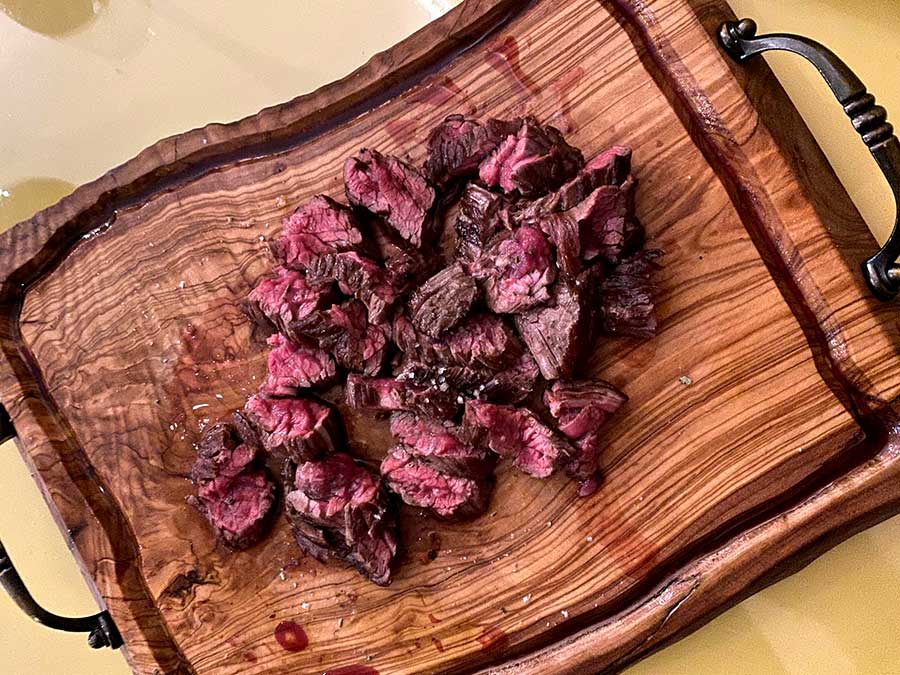 Santo Grill and Wine is Mercato Mayfair's Italian steakhouse. Here you'll find chicken liver crostini and mini truffle sandwiches, along with boards of grilled meats and steaks. We went for their fillet of beef served with black garlic sauce which was £15 for 150g and, well you can see how nice it looks.

There's also a rooftop terrace too which we hear will be open before Christmas.

Having visited Market Hall West End and Mercato Mayfair on the same night we'd say this particular food hall offers more of a relaxed and elegant vibe. The age range was more mixed here than at Market Hall and the general offering was pretty high end. It's a super spot if you're up this end of Oxford Street shopping, but we'd also head to it as a destination for a lovely night out too, particularly down in that cellar.