[SIGPLUS_EXCEPTION_SOURCE] Image source is expected to be a full URL or a path relative to the image base folder specified in the back-end but /blog/2013/casanegra/gallery is neither a URL nor a relative path to an existing file or folder.
0
Shares 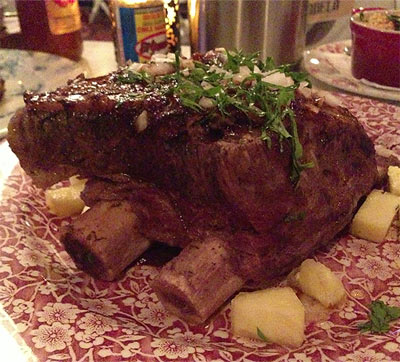 What can you tell us about Casa Negra?

The sister restaurant to La Bodega Negra, this is the latest restaurant from Will Ricker. It's a pretty bonkers look - they pitch it as if a group of Mexicans had opened a pop-up restaurant in an English house. We went on a Thursday night and the place had one of the buzziest vibes we'd encountered in London for a a while.

Modern Mexican - chef Brad McDonald has worked at Brooklyn restaurants Gran Electrica and Governor not to mention time as Chef De Partie at both Per Se and Noma.

It's where the Great Eastern Dining Rooms used to be on the corner of Great Eastern Street and Charlotte Road. There's a bar at the front of the space with a two-sectioned dining room at the back.

Where should I meet up with friends beforehand?

There are some cracking cocktails to be had at Beard to Tail round the corner while Tramontana Brindisa has a good selection of sherries by the glass on Curtain Road. Alternatively, you can head straight here to work your way through one of the most appealing cocktail lists we've seen in ages.

There were a lot of groups when we were in - so if you're heading here with a bunch of friends or workmates, there are plenty of decent-sized tables. In the back room by the kitchen there's The Kitchen Table - a large communal table that can either be booked out for groups of up to 16 at lunch or on some nights for dinner or has spaces for walk-ins. If you like being part of the action, book one of the counter seats right by the kitchen.

We kicked off with some pretty refined avocado and serrano chilli guacamole (£5.50) with warm corn chips while we worked out what else to order. From the tacos section we tried a fabulous Cochinita Pibil (£6) - with achiote and orange braised pork, red onion, black beans, but our favourite (and best dish of the evening) were the Queso Asada (£5.50) tacos with caramelised chihuahua cheese (a semi-soft cows milk chees), sweet corn and mexican salsa. We then ordered two mains - Arracherra con Salsa Habanero (£19.50) grilled skirt steak with habanero and ajonjoli salsa which was good but pretty punchily priced - and Costillas de Carne de Res en Salsa Negra (£22.50) which was an enormous portion of braised beef rib you could eat with a spoon, served up with pineapple, onion, coriander and morita chilli.

Out of three dessert courses, the one we really wanted - alfajores (vanilla cookies with dulce de leche and toasted coconut) had already sold out by 8.30pm which was annoying. So we shared a perfectly decent flan (£6).

When we come back, we're definitely going to want to try the street style corn salad with epazote, chipotle mayonnaise and pecorino which comes highly recommended and we'd probably order more of the antojitos and tacos rather than two mains between the two of us.

The cocktail menu here is one we'd really like to have more of a crack at. As it was, the two we tried - the Casa Margarita and Mexican Penicillin (El Jimador reposado, fresh lemon, agave syrup & egg white; inoculated with mescal, served on the rocks) both £8 were strong and interesting (in a good way). We could also see a lot of other tables ordering the flight of frozen margaritas for £18 allowing you try all their flavours.

Lovely waiting staff (with a notably friendly welcome desk at the entrance - other restaurants could take note), interesting food and one hell of a buzz, it's no wonder Casa Negra is doing storming business, particularly in the evenings. They've just reworked their lunch offering to offer more tacos and with two courses on the Menu del dia for £9.50 this would be a great spot for lunch too.

Prices were correct at time of writing. Hot Dinners were invited to eat at Casa Negra.