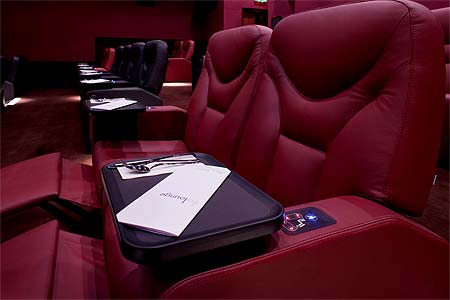 What's a new cinema got to do with London restaurants?

It's the new collaboration between Odeon Cinemas and Le Cafe Anglais owner/chef Rowley Leigh - a luxury cinema combined with good food and drink.

The Lounge is a new part of the Odeon Whiteley's in Bayswater, handily only a few feet away from Le Cafe Anglais.

What can you tell us about the set up?

The Lounge is based upstairs from the normal Odeon cinema.  You climb the "VIP area" steps and emerge into a posh lounge bar which acts as a staging area for the cinema screening rooms. In the lounge area, you can order drinks and cocktails while perusing the menu and waiting for your film to start. The idea is that you order your food before the film begins (either in the lounge or during the ads before the film) and it's brought to you at various stages throughout the screening. So you can choose for starters to be brought during the trailers and the rest of the food during the feature.

And how about the screening rooms themselves?

The experience is essentially the cinema equivalent of travelling in business class - or a very, very posh version of your local cinema. The leather armchairs with footrests are huge, with an array of buttons for reclining to your preferred angle of viewing (or just for playing around with). The screens are also surprisingly large for what feels like a private cinema.

There's also an enormous amount of room in front and behind the seats, so there's no danger of hearing anyone munching away behind you as they're simply too far away. In fact, it was this aspect of the set-up that surprised us so much - that you never felt too aware of the waiters serving food around you.

So what about the food itself?

It's divided into three areas - finger, fork and spoon (desserts). A more traditional filmgoing option is available in the shape of a hot dog, popcorn and ice cream soda.

By and large, the food on offer is a much higher quality than you'll ever get at your local cinema. We particularly liked the salsify fritters and aioli, the fried squid and the "Royale" burger - a beautifully cooked fillet steak with crispy onions in a burger bun, all from the finger menu. And it's the finger part of the menu that we reckon could do with some boosting at the expense of the fork section. We also tried the red mullet and prawn risotto from the fork section and, while it worked well and was pretty easy to eat from a shallow dish just wasn't as cinema-friendly as the fork options. We'd have preferred a greater choice of food that we could more easily pick at and, more importantly, share.

On the dessert front we also tried the dessert of chocolate ganache cake with salted caramel ice cream. This was as good as it sounds, but was served in a shallow tray - and trust us that's not the easiest thing to get ice cream out of when you're sat in a darkened room.

And how much will this set me back?

At £18, it's definitely not cheap, but with most central London cinemas costing upwards of £11 these days, a ticket to The Lounge isn't a massive leap for such a definitive improvement in your cinema viewing environment.

The food is priced between £6 (salsify fritters) and £14.50 (the Royale burger), but the penne rigate with broccoli, anchovy and chilli was a decently priced £7.50.

The food is certainly light years away from normal cinema grub and with a little more work on the menu it could be a totally brilliant experience. It simply needs more dishes that are easy to eat and share. That said, The Lounge is definitely worth travelling to, just to try it and it would be an excellent date choice or party venue.

Hot Dinners were invited to eat at the Lounge. Prices are correct at the time of writing.