Lunch at Harold Moore's Meat and Three, drinks at the William Vale and dinner at Brooklyn's Olmsted - Hot Dinners in New York 2016 day 2 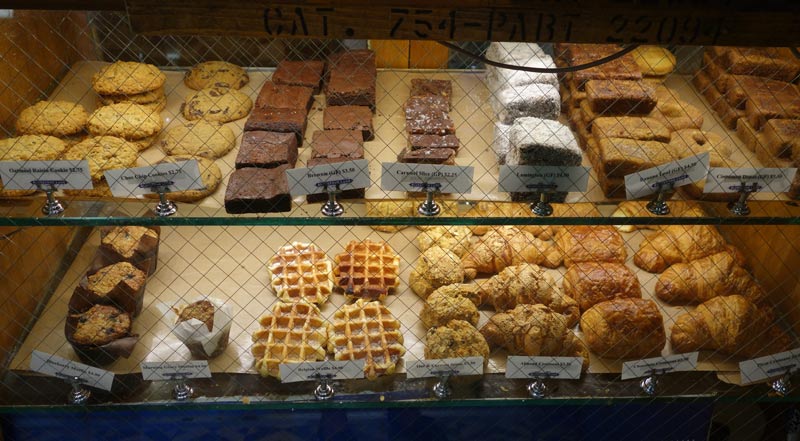 Finding a good coffee shop near your hotel is one of the most important things to sort out on any trip to New York. And we were lucky enough to happen upon (googled and found some great reviews on Yelp) an Aussie-style coffee spot Bluestone Lane tucked away in the basement of the Meredith Building on 3rd Avenue. Two shots of their Magic Coffee - a double ristretto almost like a flat white but with less milk - plus one of their signature jaffles, a toasted sarnie with prosciutto, set us up nicely for the day. 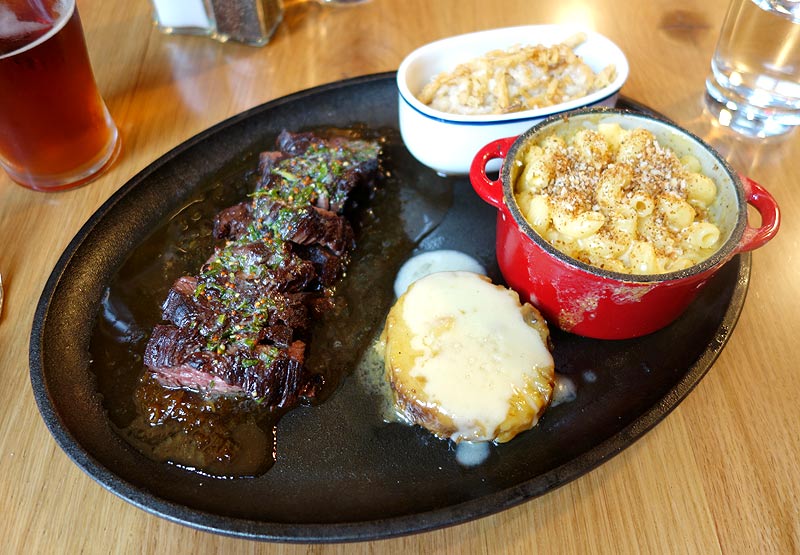 We loved chef/restaurateur Harold's Moore last West Village place, Commerce. So when we heard he'd opened a new spot just days ago, we were right in there. The restaurant is situated in the quietly hip Arlo hotel down on Hudson in the old Printing District, which only opened itself at the beginning of September.

It's a pretty simple concept - you decide on a main course (the choices are split into two price points for brunch and three for dinner - $19, $29 and $39 and you then pick three sides from a list of around 15 options. Style wise they're aiming for an upmarket cafeteria look, so there are large communal tables and plenty of counter dining spots (we liked how every counter seat had a hook and a plug for a laptop).

The concept may be based on simple Southern fare, but in practice this is elevated stuff. Both our hanger steak and veal meatballs with tomato sauce were insanely delicious and of the sides we particularly loved, a portion of grits hit the spot as did the Japanese sweet potato which had been slow cooked and then covered in cheese. 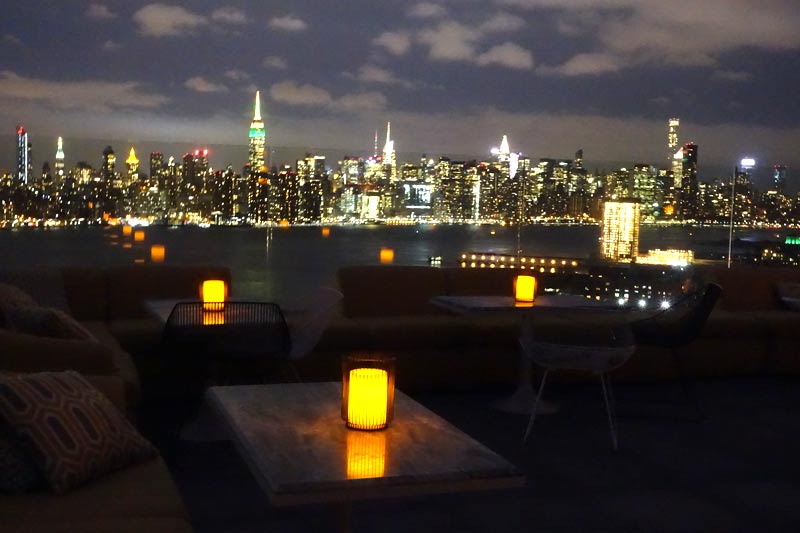 The, frankly amazing, view from the Westlight

Westlight at the William Vale hotel

The rooftop bar at this new Brooklyn hotel opened in the first week of September and it's already one of the hottest openings of the season. Part of that is down to the involvement of chef Andrew Carmellini with the bar food. Carmellini (the Dutch, Locanda Verde) is opening an Italian restaurant, Leuca, on ground floor of the hotel in November but for now he's serving up delicious bar snacks like filthy fried olives stuffed with cheese and oysters with hibscus mignonette. We tried two from the menu - heirloom tomato crostini with burrata, a total bargain at $5 and the smoked king salmon puffs with trout roe $10 for three canapes.

But the real reason you're going to want to come here is the view - the bar gives you the most Instagrammable view of the Manhattan skyline we've seen in New York. Add to that DJs and strong cocktails and you've got a winning combo. You'll definitely need to book this one ahead. 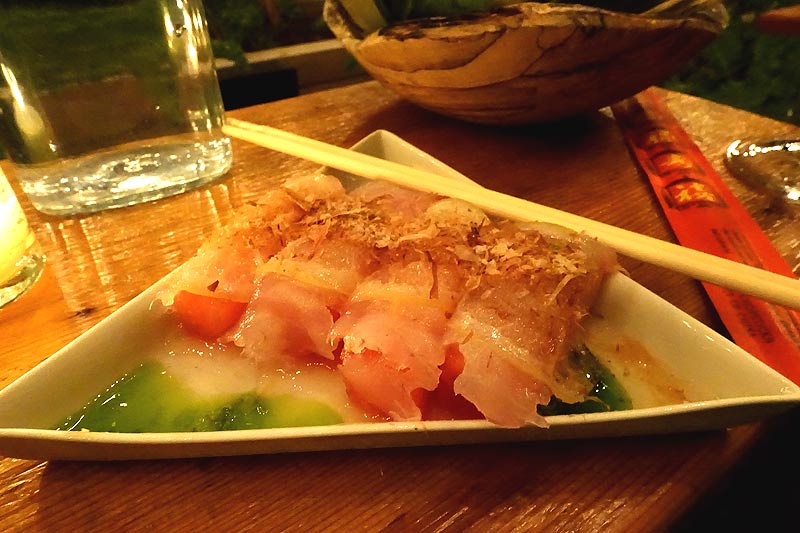 Our dinner at Olmstead turned out to be less of an interesting night out in Brooklyn and more the meal to beat this year. Chef Greg Baxtrom (Atera, Blue Hill at Stone Barns, Per Se) is turning out some extraordinary dishes at this Prospect Heights restaurant.

Dinner here starts with cocktails out in the garden and it's here you first get the sense that you might be in for a real treat. The garden is laid out with vegetable beds (a few weeks ago these were filled with radishes, when we went it was kale). Beautifully carpentry by Greg's dad includes little tables set into the borders, for you to place your cocktails and snacks on. 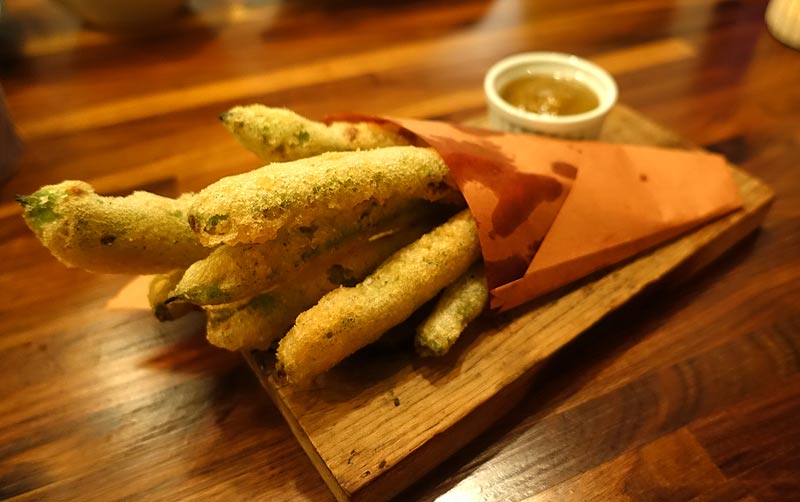 We started with a dish we'd seen all over Instagram - the watermelon sushi ($15). Instead of rice, lozenges of watermelon are draped with Long Island fluke and wafer thin slices of confit lemon. Beautiful and inventive.

Our other snack was gobi pakora cauliflower, also great, and we were going to move on to small plates before we spotted our neighbours having the romano bean frites - deep fried, whole runner beans served with green tomato ketchup. So we added that and were grateful we did. 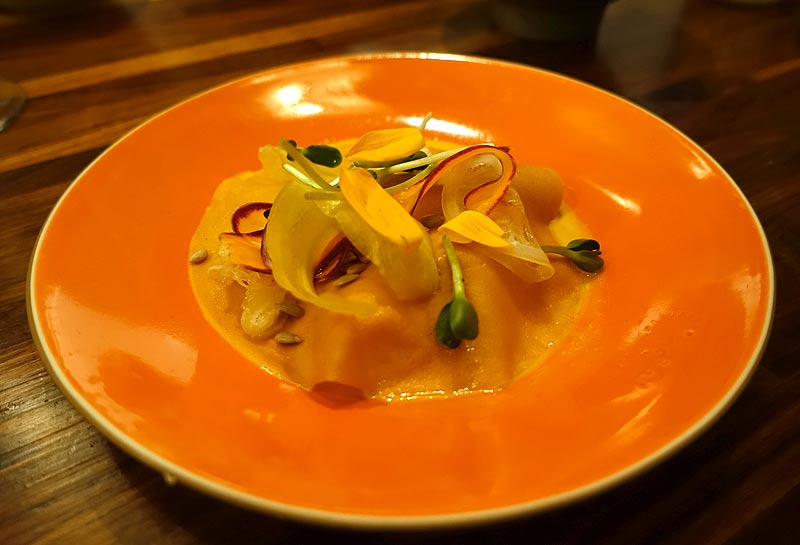 From here we moved indoors to sit up at the open kitchen and watch the chefs plating our next courses - the carrot crepe with little neck clams and sunflower petals and charred onion chawanmushi (a savoury egg custard given extra umami with the addition of bottarga).

We weren't sure these could be beaten, until we hit the best dish of the evening, the must-order heirloom tomato schnitzel served with pots of ricotta, bagna cauda and piperade ($20). This saw a thick slice of tomato given the same loving treatment you'd expect from a gorgeous piece of veal, cooked so it was just holding its shape but oozing inside. Honestly one of the best vegetable dishes we've EVER had.

Next up, we enjoyed a slice of roasted pork collar topped with raclette which was as good as it reads and for dessert we had a fondue of roasted Holmstead cheese served with chunks of apple and toasted bread.

The wine list by sommelier Jeff Ruiz (also ex-Atera) is a good mix of American and European wines and we appreciated being offered the option to drink the rest of a bottle of Californian albarino someone else had started and not finished, at a knock-down rate.

All in all, an absolute must-visit for anyone heading to New York. Our dinner at Olmsted was one of the best we've had this year. Outstanding.