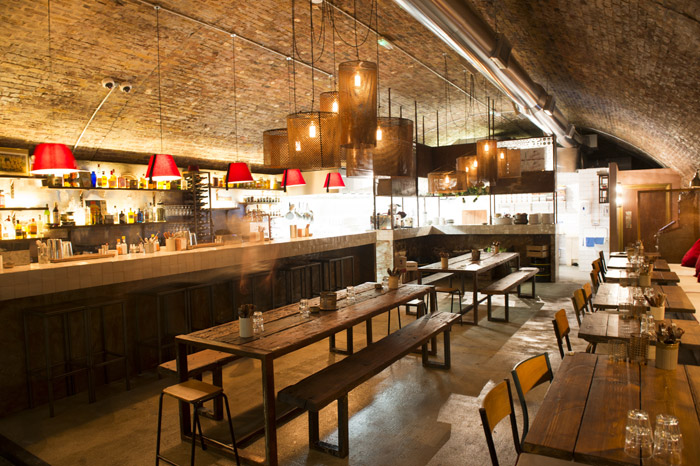 What can you tell us about Berber & Q?

It's the latest restaurant to take up residence in one of east London's railway arches - this time in Haggerston. They're serving up barbecue, but with a definite Middle Eastern twist - so it'll be quite unlike any of the ever-growing number of BBQ restaurants you've may have been to recently.

It's a few minutes walk from Haggerston overground, just off the Kingsland Road.

It's a no-reservations restaurant, so when should I arrive to avoid the crowd?

It gets busy later on, but we arrived mid-week just before seven and we think you'll be seated pretty quickly if you arrive around the same time. Expect a longer wait at the weekend, of course, but they will take your number and call you - so you can go to a nearby bar while waiting.

So where could we go while waiting for our table?

There are a couple of options worth pointing out in the immediate area. First there's Tonkotsu, which has a small bar area and a decent amount of Japanese whiskies and beers on offer (among other things) or there's the Board Game Cafe. That's right next to Berber & Q, if you fancy a game with your beer before/after pigging out on BBQ.

There's also a bar area in Berber & Q itself. If you can grab a space there, it may be your best waiting option.

During the mid-week the crowd was pretty mixed, although expect it to skew younger at the weekends when the queues grow. It's also surprisingly suitable for vegetarians too, as there are lots of interesting veggie dishes on the menu.

Anywhere's good - but by the side (with comfier seating) is best. Also be aware that you'll want room on the table for as much food as you can order.

The menu is split into meats, mezze, pickles and "bits and dips". We'd recommend grabbing at least something from the last section while making up your mind on the rest. The saffron-roasted pistachios are a must and the hummus was good - although a little runny for us. As for the rest - highlights were:

The main events all come together on a plate with an array of salads and peppers. But, most importantly, the meat is all laid out on their incredibly good flatbreads which do a wonderful job of soaking up the juices.

We did order the much-vaunted short-rib with date syrup glaze, which was unfortunately only half as good we'd been led to believe - the other half of it being much tougher to eat than we were expecting. But we've heard good things about this dish - so it may have been a one-off miss. And we'll have to go back to try the smoked pork belly.

Definitely start off with a cocktail while choosing the rest. They're all between £7.50 and £8.50 and all have a middle-eastern touch to them. The Top Shelf (bourbon, cider brandy, maple syrup, lemon, egg white, baharat) is an easy recommendation.

As for the wine list, there's a small list starting at £18.50 a bottle and one which has its share of biodynamic wines ("funky, orange, cloudy"). We went for the Rkatsiteli 2012 (£44) and have to admit that it was a bit... challenging. So try a glass of that before heading for a bottle to make sure it's to your taste.

It's clear that Haggerston has another big hit on its hands with Berber and Q, it's already getting rave reviews from Jay Rayner and others. It makes for a nice alternative to the growing number of BBQ restaurants in town - you'll still get your fix of some great meat, but it's all balanced out with some very fine mezze.

Hot Dinners were invited to Berber & Q. Prices were correct at the time of writing.