Test Driving L'Escargot - the Soho institution still has it 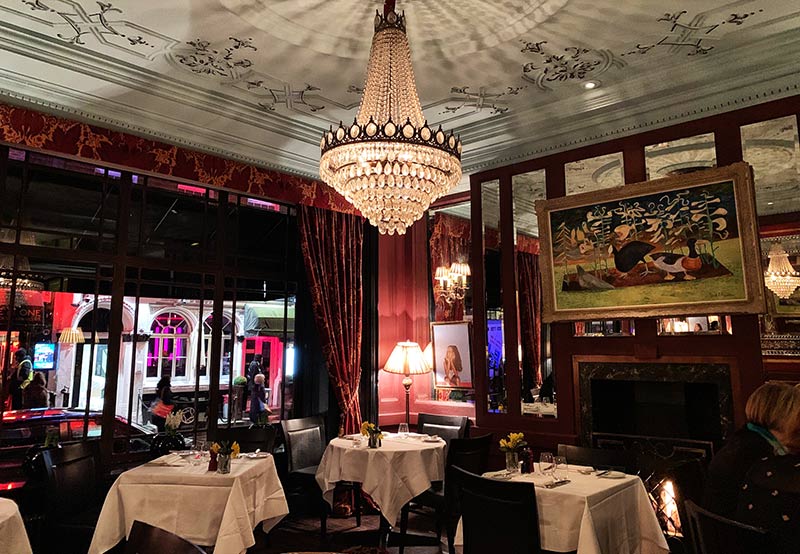 The gorgeous front room at L'escargot. You can just see the fire blazing away back there.

What can you tell us about L'Escargot?

Put simply, it's a London institution, having been in Soho since 1927 (although the restaurant was in a smaller space before on Greek Street as far back as 1896). It stayed within the original owner's family for over 50 years before being taken over by Nick Lander and Jancis Robinson (now both FT writers, and whose son is behind Portland and another classic London spot, Quality Chop House). For a while after that, it was home to Marco Pierre White.

Later, in 2014 it was acquired by the legendary Brian Clivaz (of Arts Club, Home House and Langan’s Brasserie) and Laurence Isaacson who co-founded Chez Gerard. They have remained owners since. In the kitchen is Head Chef James Tyrrell. There's a great potted history over here.

We eat at a LOT of new London restaurants for Hot Dinners, which is all well and good, but does mean that some of London's longstanding and really great restaurants don't often get the attention they deserve. So we'll be mixing up our Test Drives with some London classics from now on - and this definitely fits the bill.

Deep in Soho, on Greek Street, just a few doors down from the Lina Stores restaurant. 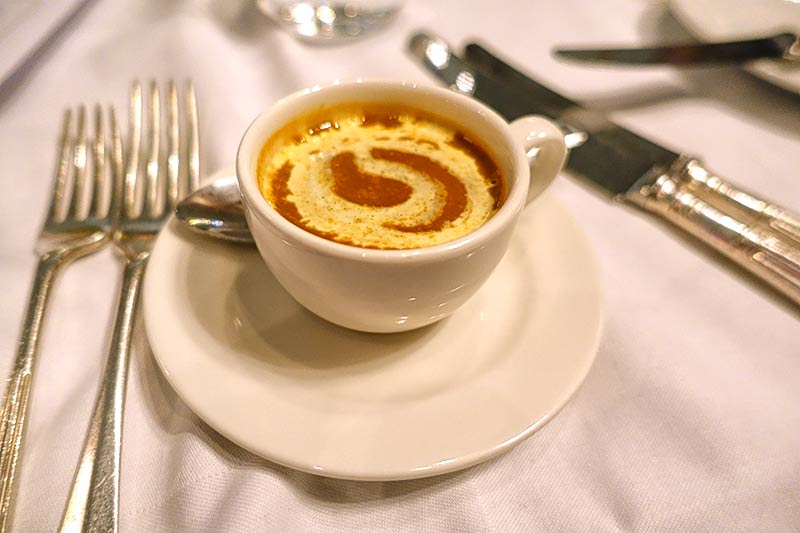 We kick things off with a mini amuse - the lobster bisque. A classic dish with a spicy kick that's also available as a starter (£11)

Where's good for a drink first?

The bar at L'Escargot itself (on the first floor) should definitely be in the running. We foolishly missed out this time but did have a couple of cocktails while faffing around deciding on what to order. Always a good test of a bar, the martini was excellent - a top class version of our favourite drink (and we're very fussy about that). Another favourite is the Tom Collins - so we tried out their "cocktail du jour" - the Grand Collins - with Grand Marnier, orange juice, sugar and soda (£9.50). Again, an absolute top-class cocktail.

Other than the bar here - there's also Milroy's whisky bar just up the street or Simmons, just around the corner.

The restaurant is a room of two halves, divided by the bar space (just serving, not for sitting at). Both rooms have much to recommend, but you really want to eat in the front room if you possibly can. It feels like dining in the Soho living room of someone very rich. AND there's an open fire too.

And what kind of food should we expect?

Classic, rich French food. The menu is a big one-pager old-school affair with all the specials added daily. It's very classic French - but with something of a modern touch too. This is real comfort food - it was filled with dishes perfect for a cold January evening. And yes, in case you were wondering, there are  snails on the menu.

Here's what we had on the night. 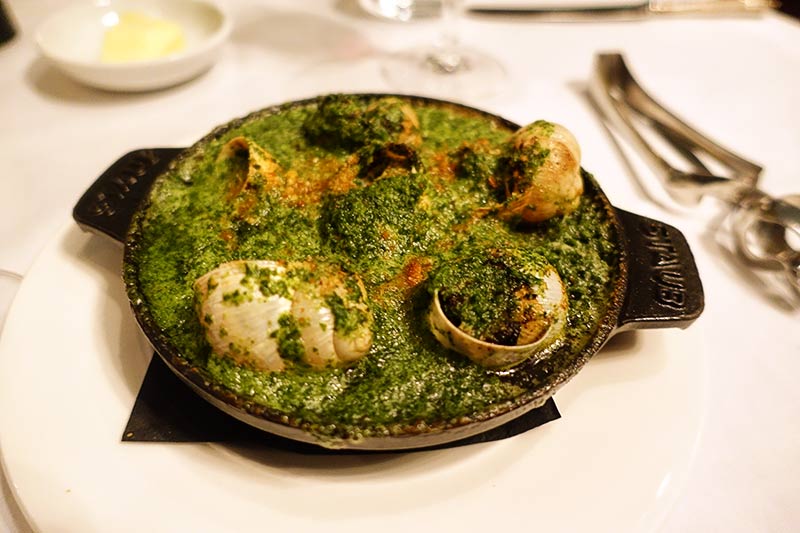 The must-have - it's in the name. after all (and they were the first restaurant to serve them in the UK). The snails are available as 6 (£16) or 12 (£30) and are drowned in garlic and parsley (the tablecloth wasn't quite so pristine after we got stuck into these). If you've never tried snails, this is the time to do so - meaty, garlicky goodness. If you like a bit of tableside theatrics, you can also have them flambeed in Ricard (£3 each). 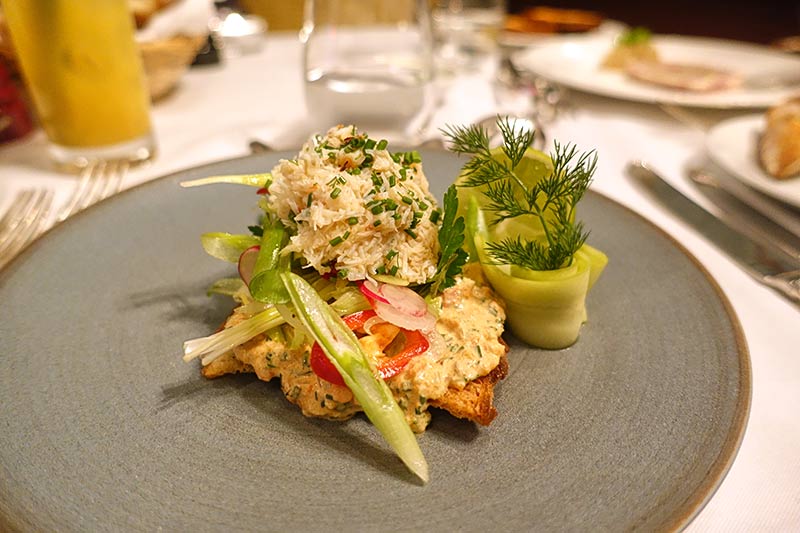 A starter of a spicy crab salad (£16) - a traditional salad given an decent kick with added chilli. 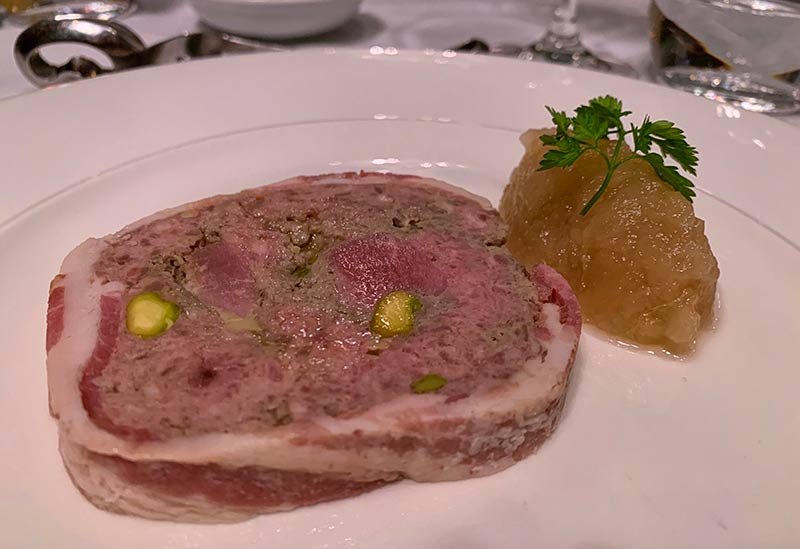 On the specials list - goose and duck terrine with pear chutney and toasted brioche (£11) - just a whiff of this as it was set down in front of us was enough to get us drooling. There's also the foie gras terrine with sauternes jelly on the main starter list (£18). 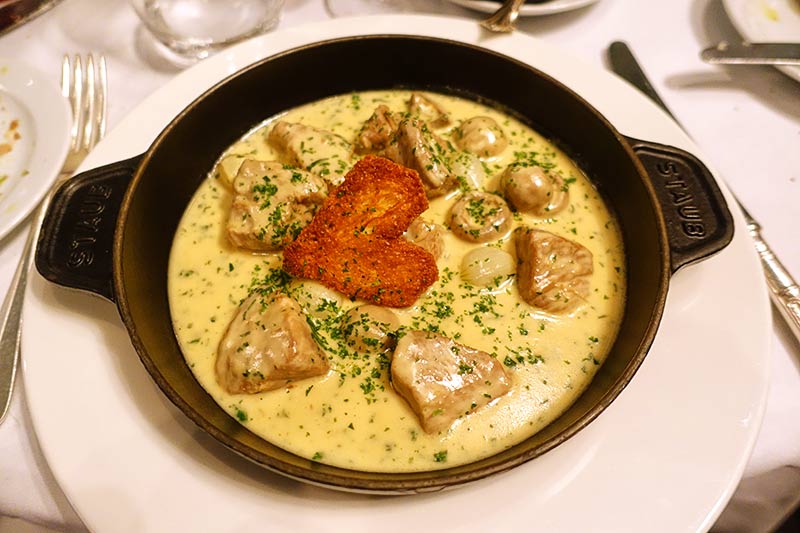 Also on the specials - this blanquette de veau a l'ancienne (served with rice - £21). Just about the best dish we could hope for in the deep of winter. Creamy, comforting goodness. Mopped up with the generous supply of bread. 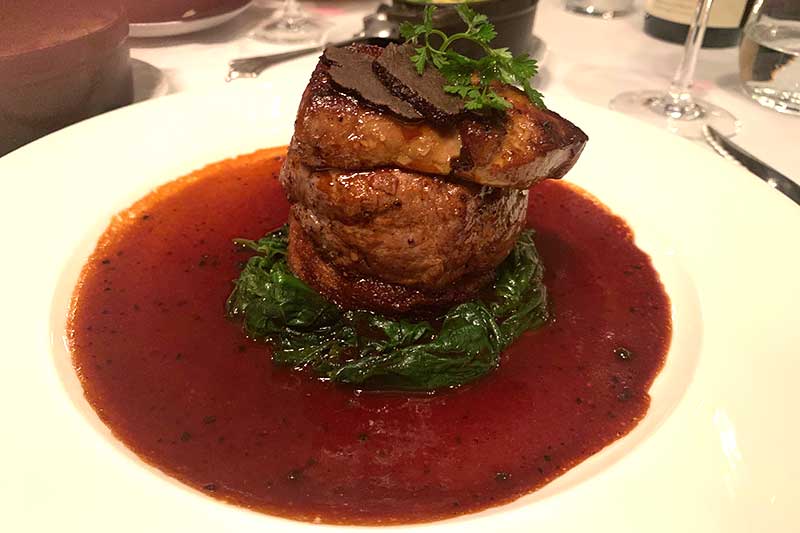 The big deal as far as the main courses are concerned - Tournedos Rossini - beef fillet with foie gras and truffle (£39). Such a classic dish with a crouton at the base, beautifully cooked piece of meat and just look how thick the truffles are sliced. 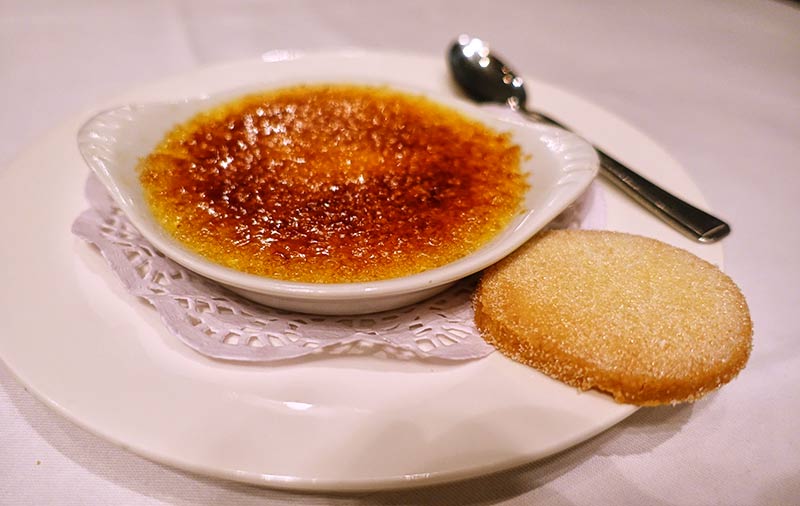 Hard to beat a classic creme brulee (£9) and this one came with a meltingly good sliver of shortbread. 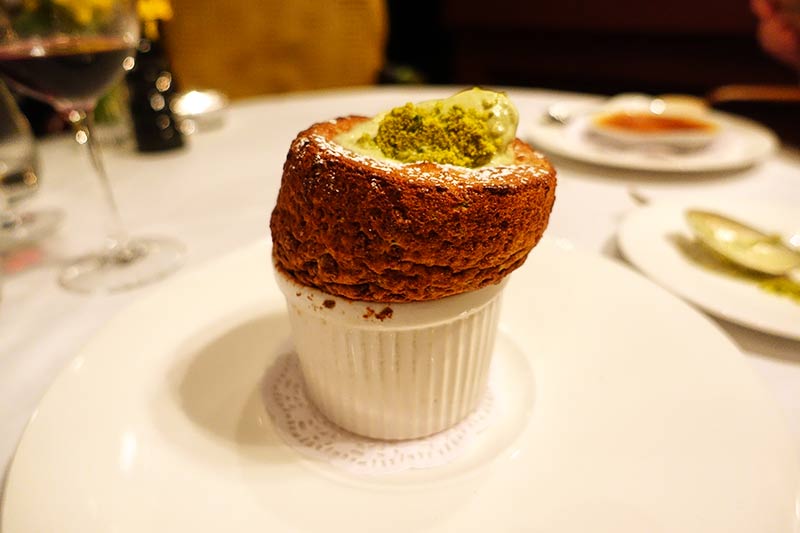 Ending with a pistachio souffle (£12) - pictured after we'd stuffed the ice cream in the top. It takes 20 mins but that wait is very welcome after a dinner of comforting but rich food. This classic - in homage to PIerre Koffman - never ceases to please.

Turn your menu over and you'll find the wine and cocktail list. The wine list is pretty good value, too. Yes, it does reach as high as £500 (Chateau Angeles, Grand Cru Classic 1998) if you're pushing the boat out - but the house white is £28 a bottle and there are 15 bottles under £40 on the list. So, for a restaurant that really feels like a special occasion, it's pretty good value. We went for a 2017 Chateau de Fleurie (£48) which proved to be a good match with anything we could throw at it.

We'd been continually hearing very good things about L'escargot not long after its current owners took over, so we've been meaning to try it for a while - particularly as we'd never been in before. It mixes old-school French cooking with newer touches in a room that immediately makes you feel at home. The perfect example of a comforting night out - mixed with hugely comforting food. This one deserves to stick around for at least another 100 years.

Hot Dinners were invited to L'Escargot. Prices are correct at the time of writing.

Find out more about L'Escargot