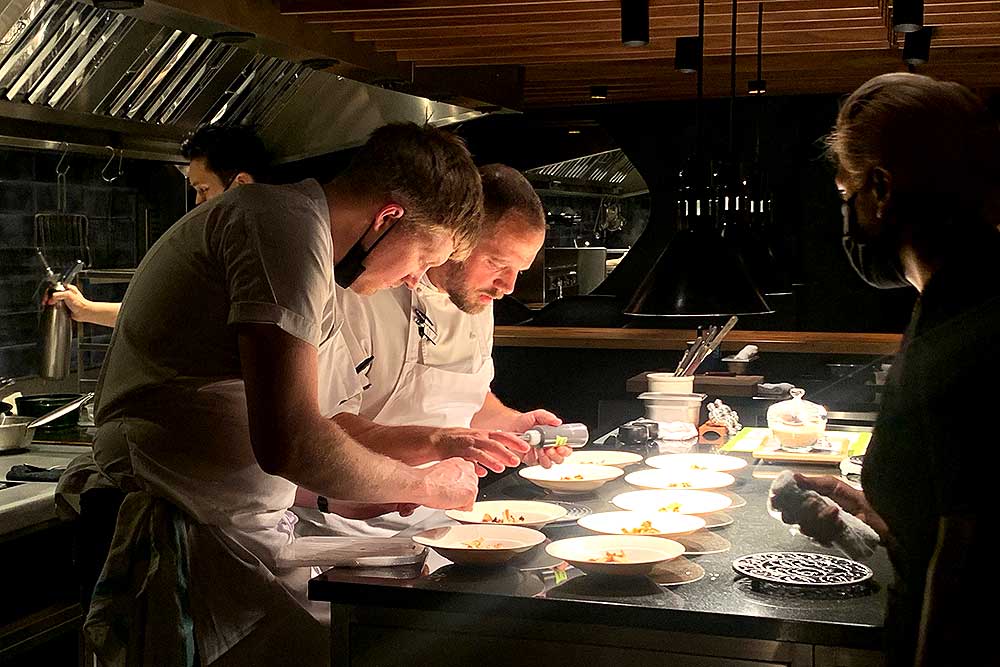 You'll see this a fair bit - the plating all happens on the central island. The communal aspect encourages asking more about the dishes too - so you can get a much better appreciation of the meal.

What can you tell us about Kitchen Table?

The restaurant launched in 2012 in two halves. Up at the front was Bubbledogs, with hot-dogs and grower Champagne run by Sandia Chang and behind a curtain at the back was Kitchen Table run by her husband James Knappett. A counter-dining only space, everything was centred around an open kitchen and a single ever-changing menu. It won endless praise and eventually worked its way up to two Michelin stars, one of only eight restaurants in town currently blessed with that many.

With the first lockdown back in March 2020, Kitchen Table and Bubbledogs closed and remained shut ever since. During that time the husband and wife team decided it was time to say goodbye to Bubbledogs and make the entire space devoted to Kitchen Table. The long refurb has finally been completed and once again, the Kitchen Table is open for business.

So what are the big changes?

It's a pretty dramatic shift throughout - but we'll take the changes in stages. First off, Bubbledogs has now been replaced by the Kitchen Table bar. It's not a bar that you can turn up to for a drink though - it's all part of the Kitchen Table experience. The night starts here, where you'll have a pre-dinner drink and a few snacks to get you going. 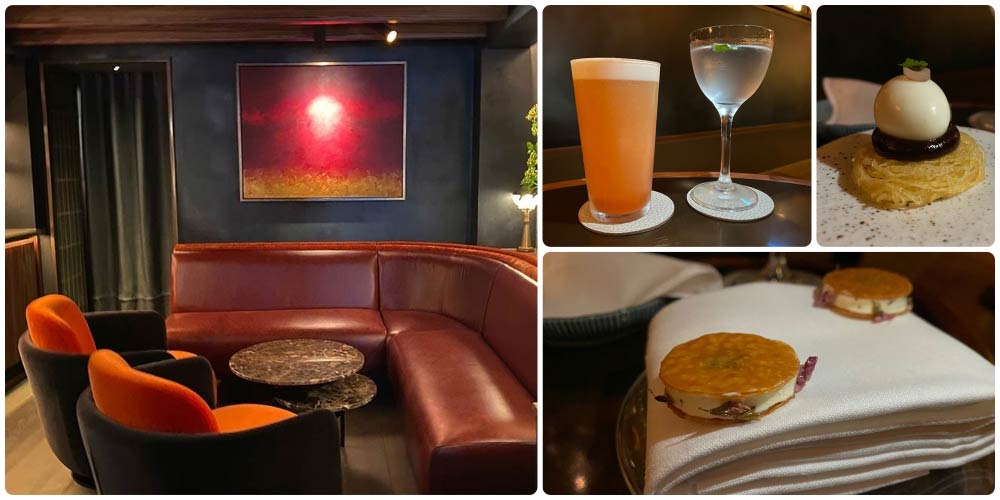 Things start here in the bar. We went for a Fig Leaf with scotch, fig leaf and strawberry soda and a Stinging Nettle (made with nettle gin), while the snacks kicked off with a chicken skin cracker with rosemary mascarpone, bacon jam and rosemary flowers. The entrance to Kitchen Table's restaurant is behind the curtain as before.

Once you're done here. you'll move into your seat at the counter for the main event. Here, everything has changed. Some more obvious differences are the new oak countertop, new chairs or the new ceiling. Only one thing has remained from the previous iteration - the blackboard filled with scribblings from fellow chefs (that's on the far end as you take your seat in the room). 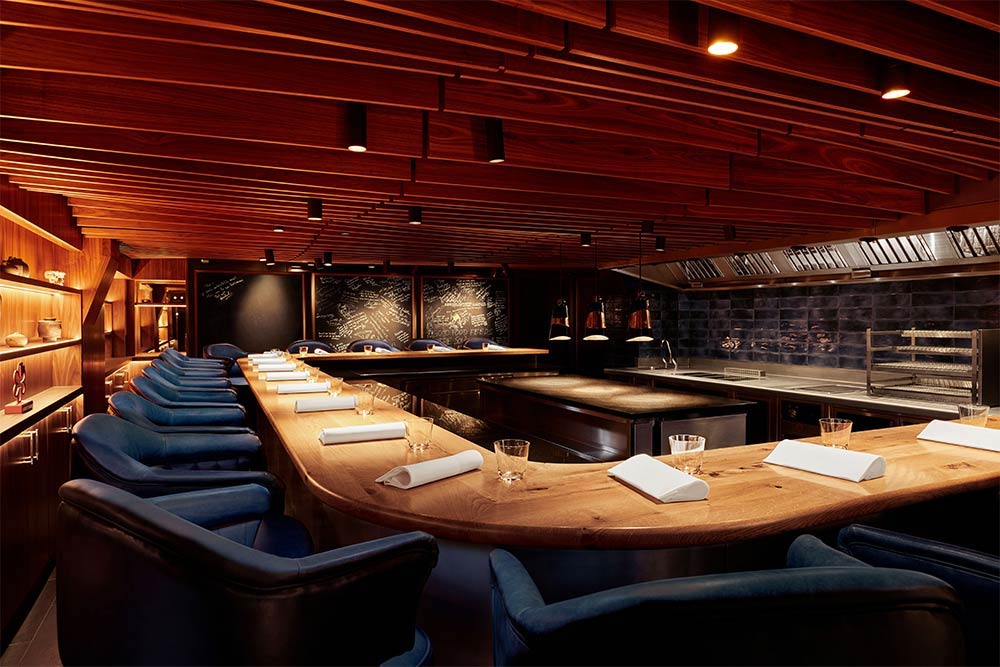 So what kind of food can we expect?

Shall we say it's a similar take to before while, at the same time being completely different. So the cooking is European, using British and seasonal ingredients and with a particular focus on certain UK suppliers. As the dishes are introduced throughout the night, you'll hear many of the great British produce suppliers being given a shout-out.

So while the style is the same, you can expect a completely different menu - it's been 18 months since they were last open, after all (although they did release an excellent DIY meal kit).

The same menu is served to everyone and is comprised of over 15 courses. While each course is small - they're packed to the brim with the best ingredients and some intense flavours throughout. It's certainly filling, but not at a level where you need to go for a long walk afterwards.

We're not going to cover every single course below - you need some surprises - but these should give you a taste of what's on offer. 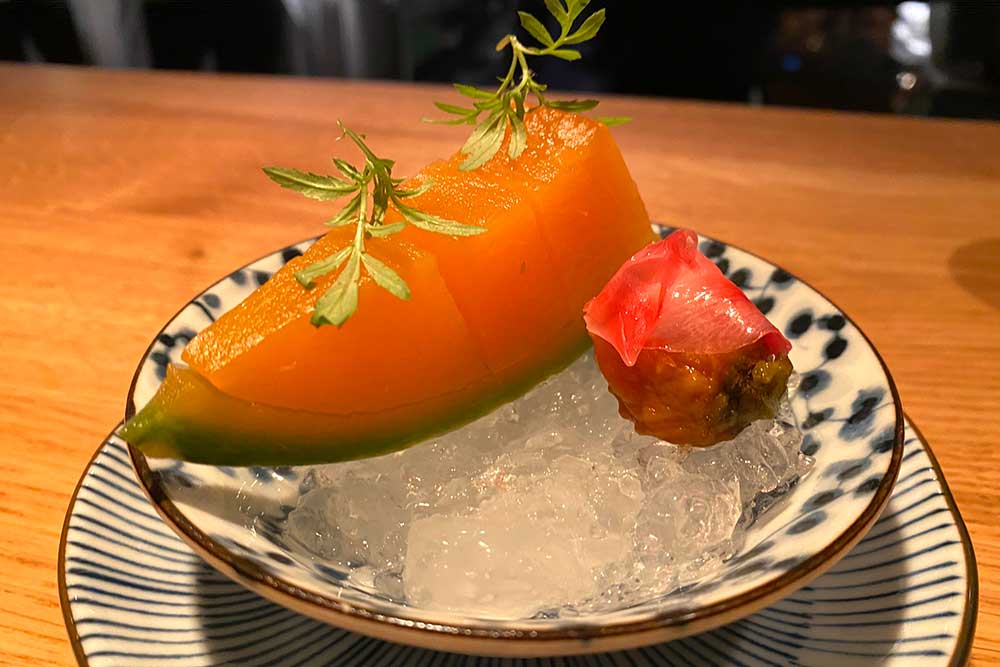 Compressed melon with marigold and dehydrated carrot with rose and yoghurt. Imagine the flavours of both intensified by 100 and you'll get an idea of this dish. 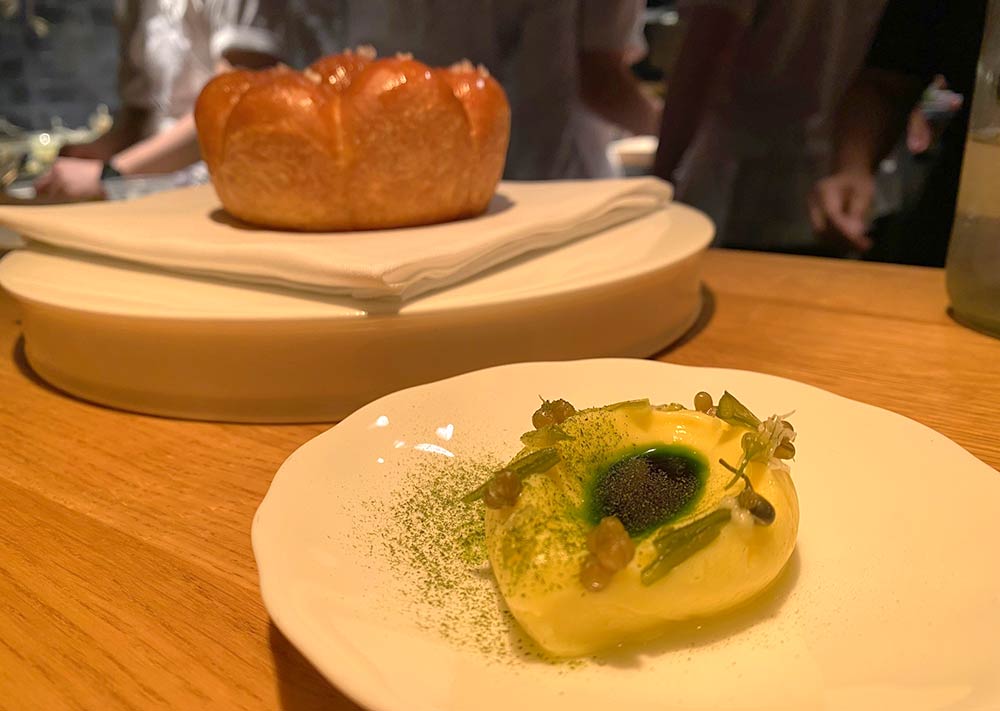 The bread course deserves specific mention. The parker house rolls have always been a thing at Kitchen Table (they were part of the kit too) but this wild garlic butter was sublime. It's all developed over the course of a year (it uses the previous season's wild garlic, including pickled flowers and stalks) so is particularly intense. 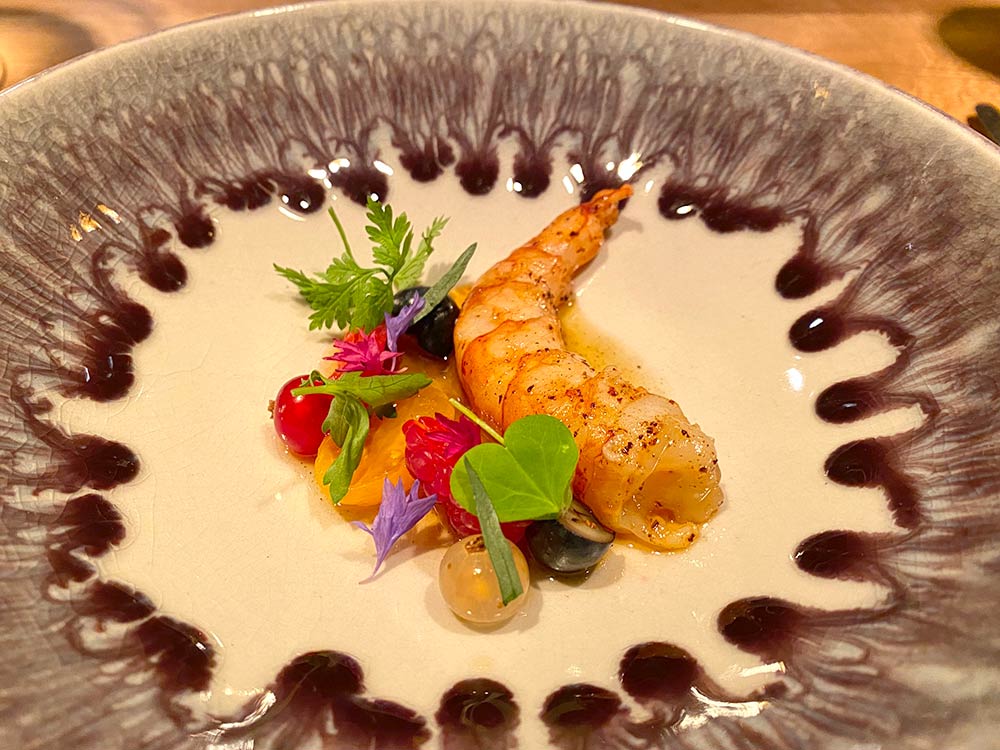 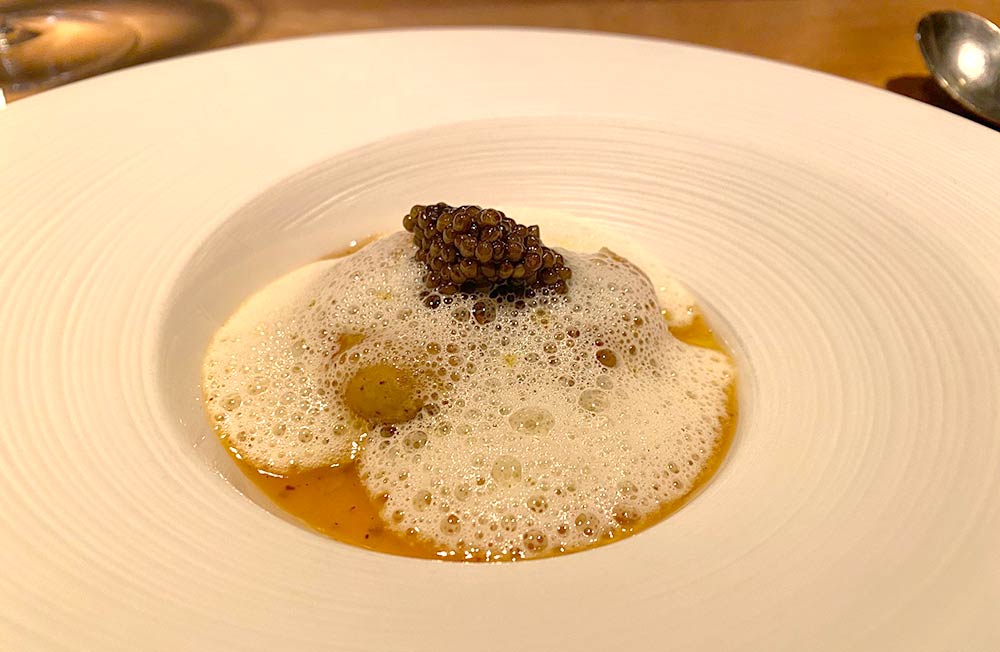 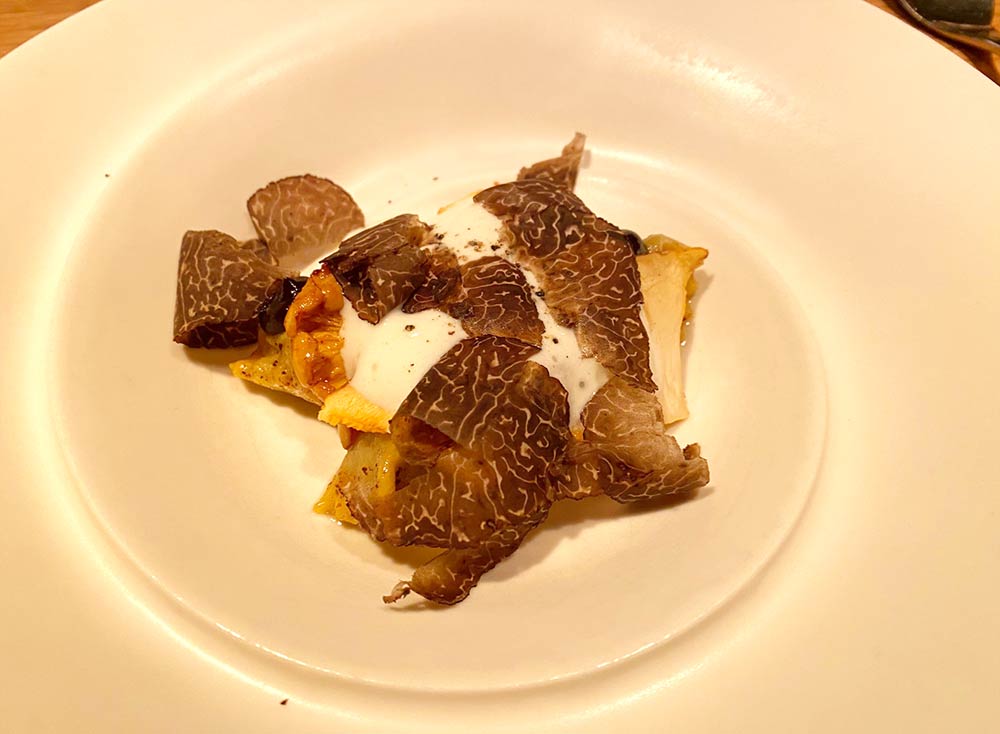 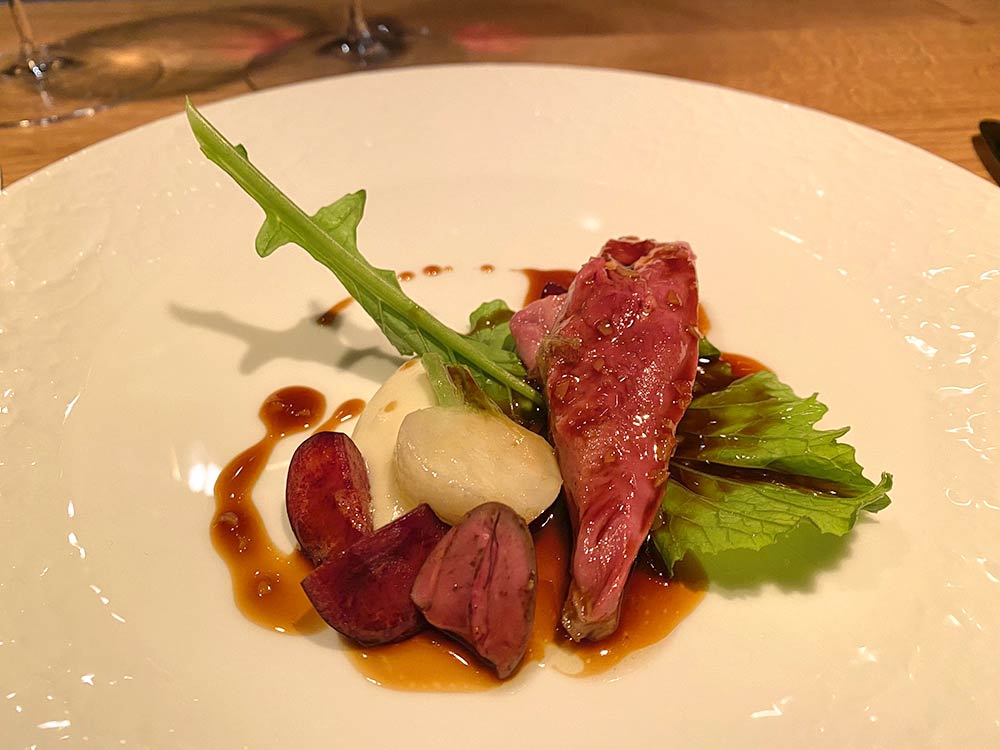 Pigeon, cherry kernel sauce, cherries and turnip. Like much of the courses - you'll also get a look at the pigeon (squab in this case) just before it's fully prepared. 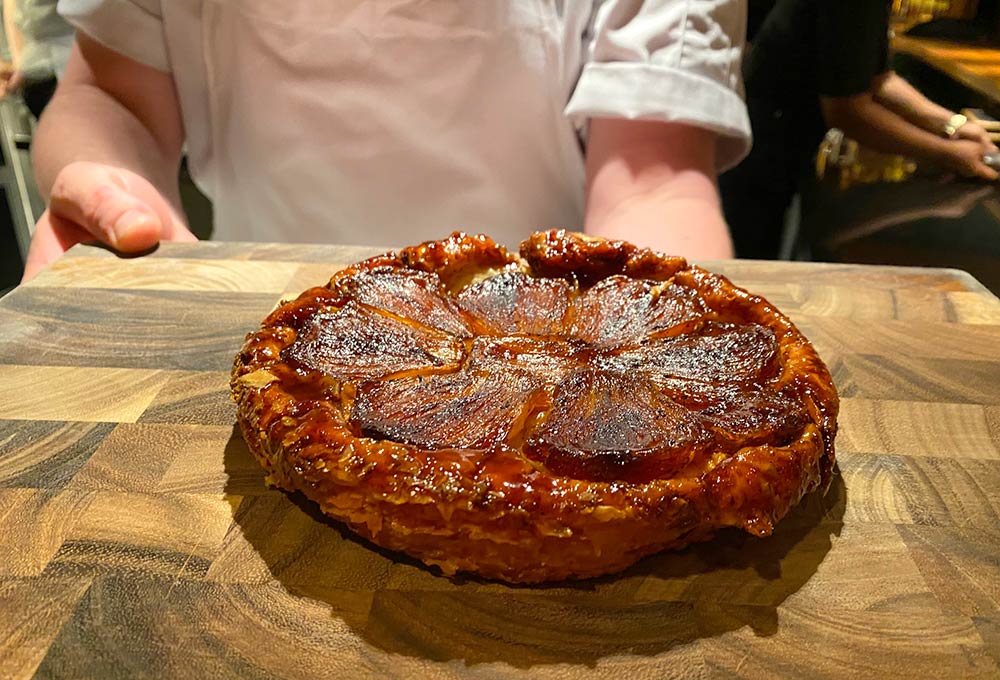 Another example of seeing something before it's served up - the onion tarte tatin. Something we'd never considered - and now want to try in our own kitchen... 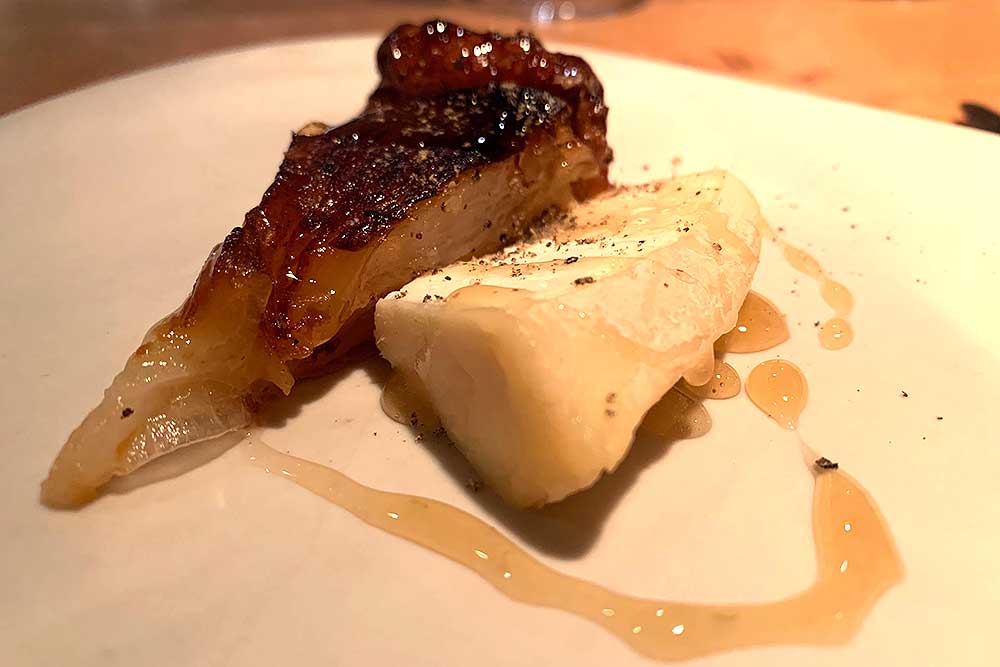 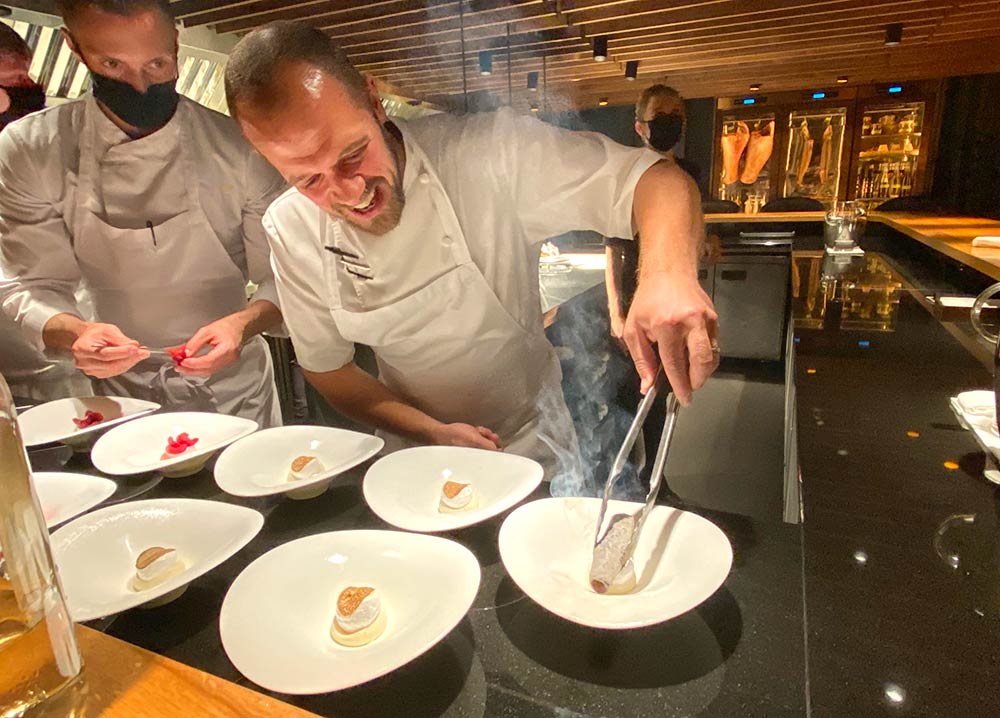 A nice touch, on one of the desserts, a light meringue base for the raspberries is toasted with a red hot ember on top. 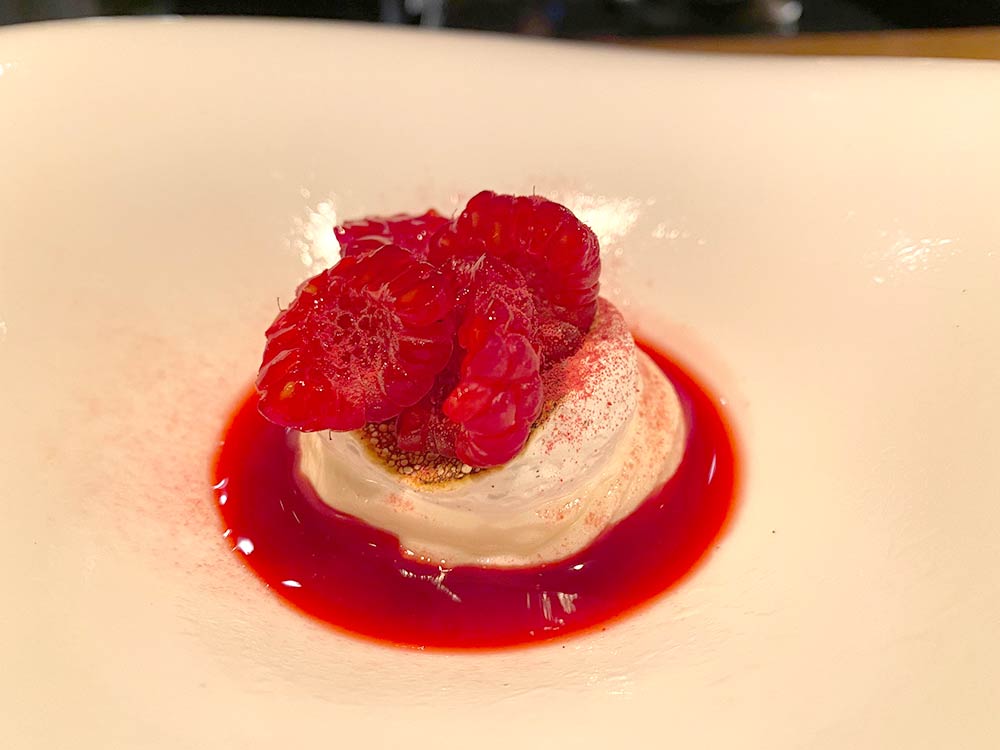 And then it's back to the bar?

Yes - once done with the main desserts, it's back to the bar for tea/coffee and your last petit fours. We loved the way the tea was served - you're presented with a variety of foraged herbs and they'll make those into a pot of tea for you (we went with meadowsweet and woodruff), A lovely touch. 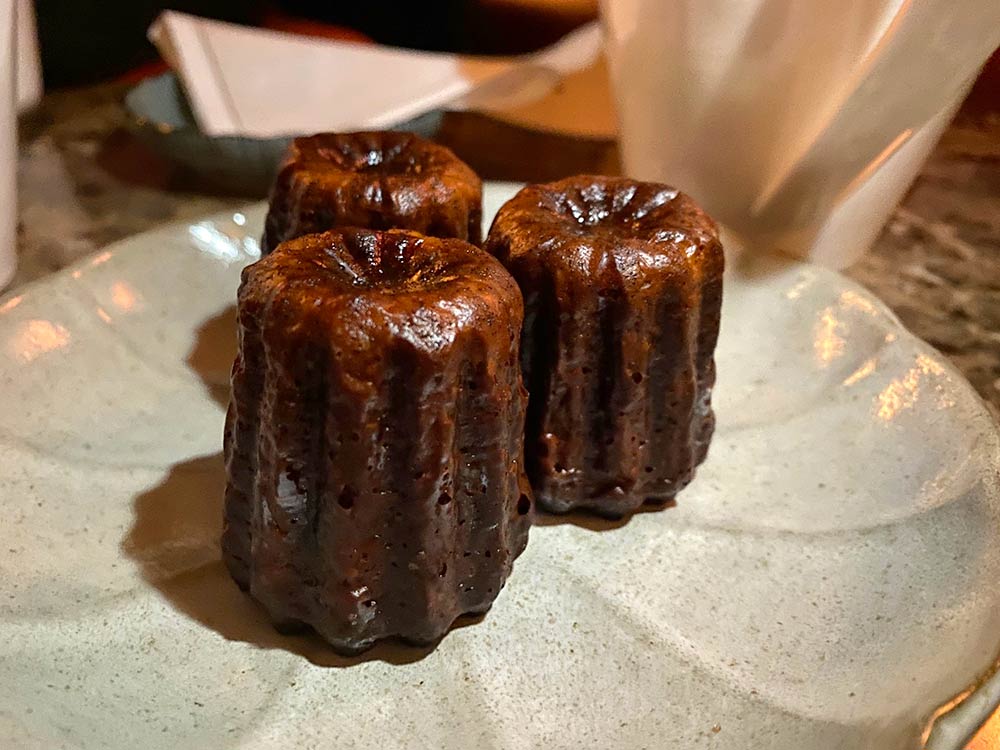 The Kitchen Table caneles - do not leave without one.

Kitchen Table was impressive enough before it closed for the refurb and now it's returned looking stunning throughout. It really feels more fully rounded now - adding the bar really helps to enhance the whole experience. Combine that with phenomenal food - some of the best to be had in London right now - and a counter dining vibe quite like any other, we have to wonder if Michelin might well come knocking with a third star soon...

Where is it? 70 Charlotte Street, London W1T 4QG

Hot Dinners ate as guests of Kitchen Table. Prices are correct at the time of writing.