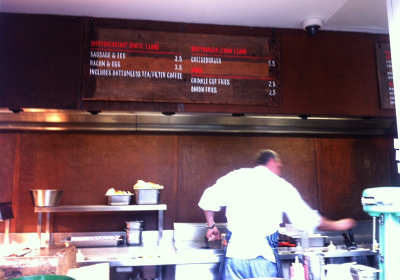 People may be talking about burger fatigue on Twitter, but if the recent excitement over the opening of Dirty Burger in Kentish Town is anything to go by, there's life in the old patty yet.

We popped down on the opening day to check out Soho House's contribution to London's burger craze and the place was already humming - although the 50% off opening offer probably didn't hurt. It's housed in a shabby-chic corrugated iron shed round the back of the newly-open Pizza East at Highgate Studios with one large communal table and a couple of counters with stools. Unless you cycled here, try and get a seat that doesn't look over the LA Fitness studios - that's too much guilt for our taste.

The menu here is ultra pared-down. Breakfast (served from 8-11am) is either bacon and egg or sausage and haggis patty with egg for £3.50 with bottomless tea or coffee. After 11am there's just one burger on offer - the cheeseburger at £5.50. As you'd expect, it's every bit as sloppy and dirty as the name suggests - with a pickle, French's mustard and piles of melting cheese to boot. We could have done with a little more seasoning in the patty, but other than that, it was pretty darn good.

To go with it - you can pick from crinkle cut or onion fries (£2.50). We tried both - it's been an age since we had a crinkle-cut chip and these were worth waiting for. But the real hit was the cider tempura battered red onion fries. Make sure you get your own portion and don't have to share these beauties.

For drinks, there are soft drinks and shakes as well as Birra Morretti and Camden Brewery Pale Ale on draft.

With opening hours at the weekend stretching to 1.30am with a license - this is probably going to be a lunchtime hit as well as a popular late-night spot for Kentish Town.