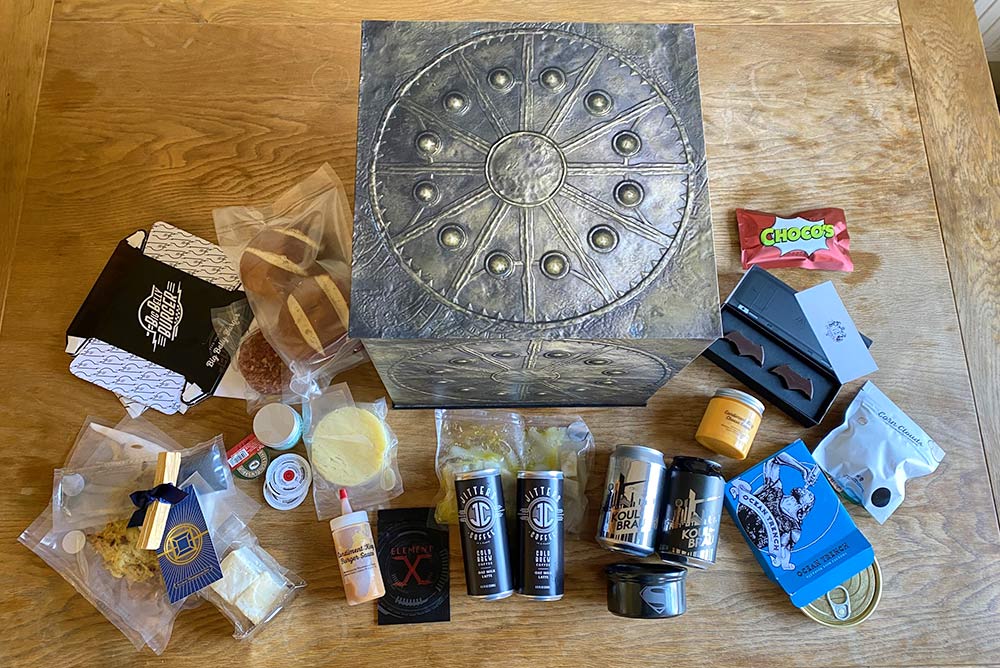 Here's what's in the Mother Box, and the box itself. It's not subtle, that's for sure. Note that every single element of packaging has some form of DC branding, even if it might be subtle at first.

What can you tell us about The Mother Box?

Essentially, it's a DC Comics (that's Batman, Superman, Wonder Woman and many more) themed meal-kit. It comes from Wonderland, the people who will be bringing a DC Comics-themed restaurant called Park Row to London which is due to open in Summer 2021.

It's part of the release of the new version of the Justice League movie, aka The Snyder Cut - a four-hour epic re-cut version that's out now. In that movie, the Mother Boxes are essentially the MacGuffin, although those boxes are not filled with food like this particular one.

So what's in the box?

As you can see from above, quite a lot. There's also a very impressive level of attention to detail that's gone into things here. That starts with the box itself which is designed to look just like the one in the film. Inside, pretty much everything has an element of DC comics branding, primarily in the packaging. It's also not too obviously themed - there are some very subtle references, almost easter eggs, to the DC characters and in-comic "brands" that will be immediately picked up on by those who know a little too much about them. And yes, that includes me.

We do wonder if some of these elements will come back into play when Park Row opens, as it's clear that an awful lot of effort has gone into this meal kit.

What kind of kit is it?

A mixed bag. Or box. Some of the elements need a little more cooking than others, like the souffle or the burger, while some can be eaten immediately. Those that you need to cook are really very simple to put together - even the souffle turned out to be much simpler than we were expecting.

Here's what we created from the box: 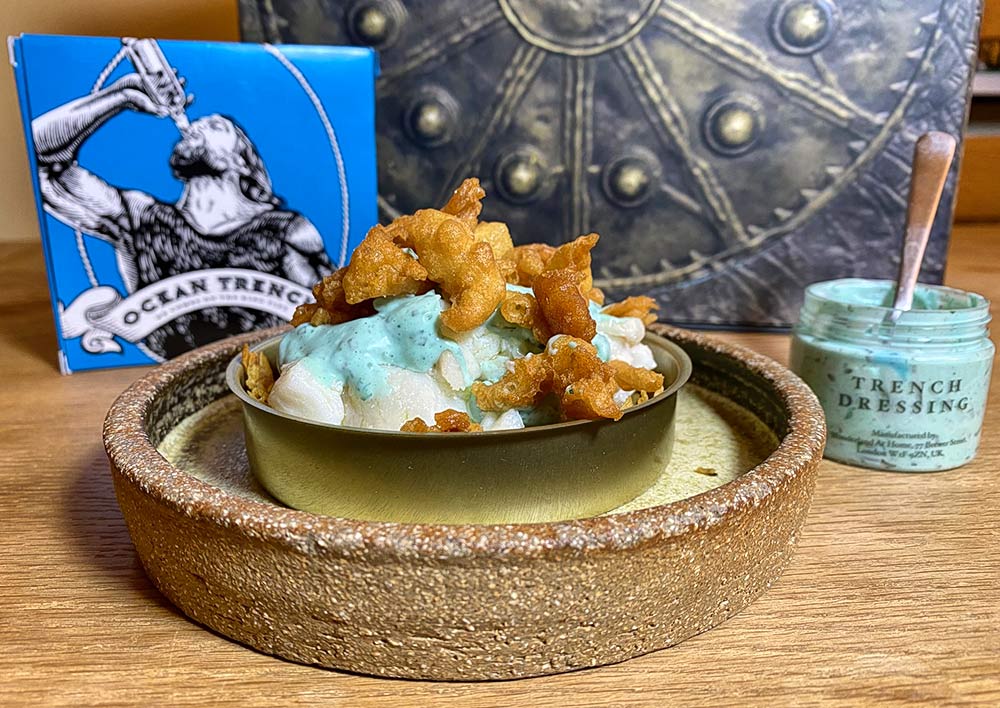 The Ocean Trench (that's the Aquaman-themed snack) is a potato cake topped with white fish, "Trench" sauce and finished off with crispy scraps. We really liked this and it was the first indication that the box is a step beyond your traditional themed tie-in. 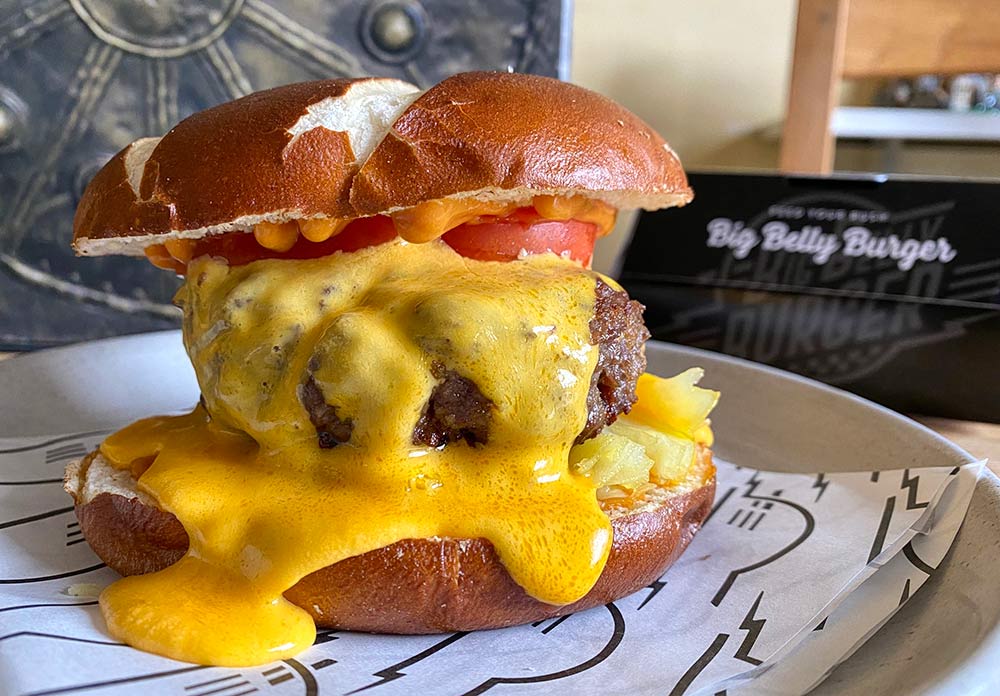 The Big Belly Burger (first seen in Superman comics in the 80s) - which is a burger, potato rosti, burger sauce and cheese sauce all in a pretzel bun. The burger's not going to beat one from, for instance, Bleecker but the whole package is not bad at all. And it gets extra points for the sauces coming in Condiment King (actual bad-guy character) branded pots. 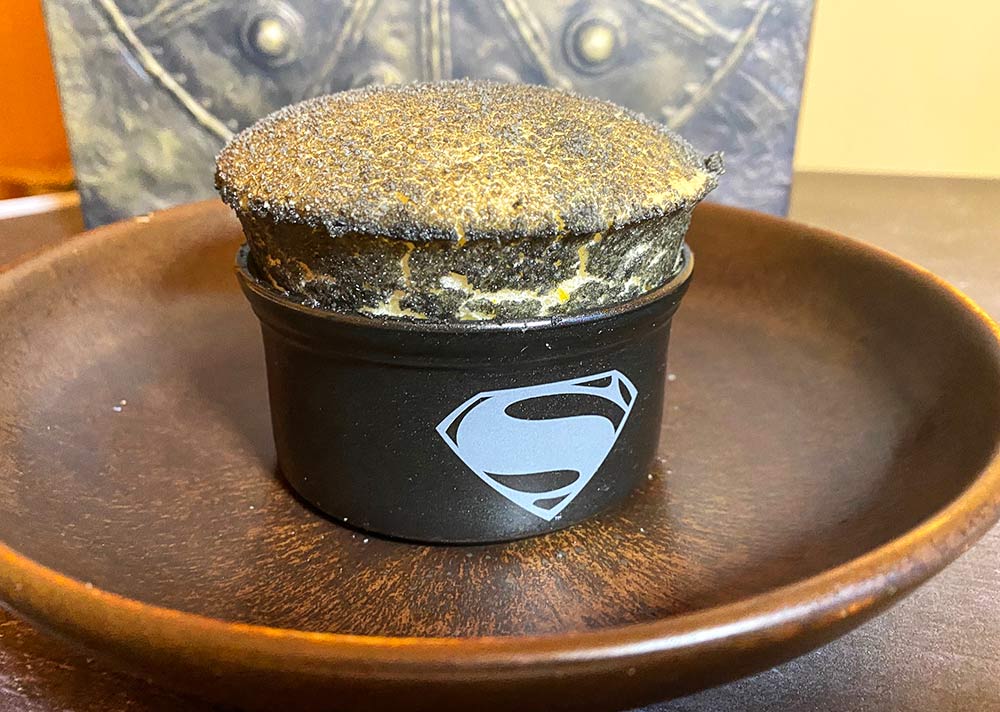 The Resurrection Souffle, which comes with this nice little ramekin. Feels like they missed a trick by not calling this "Superman Rising". And talking of that, we were VERY pleased with how this came out - it was our first ever attempt at a souffle. 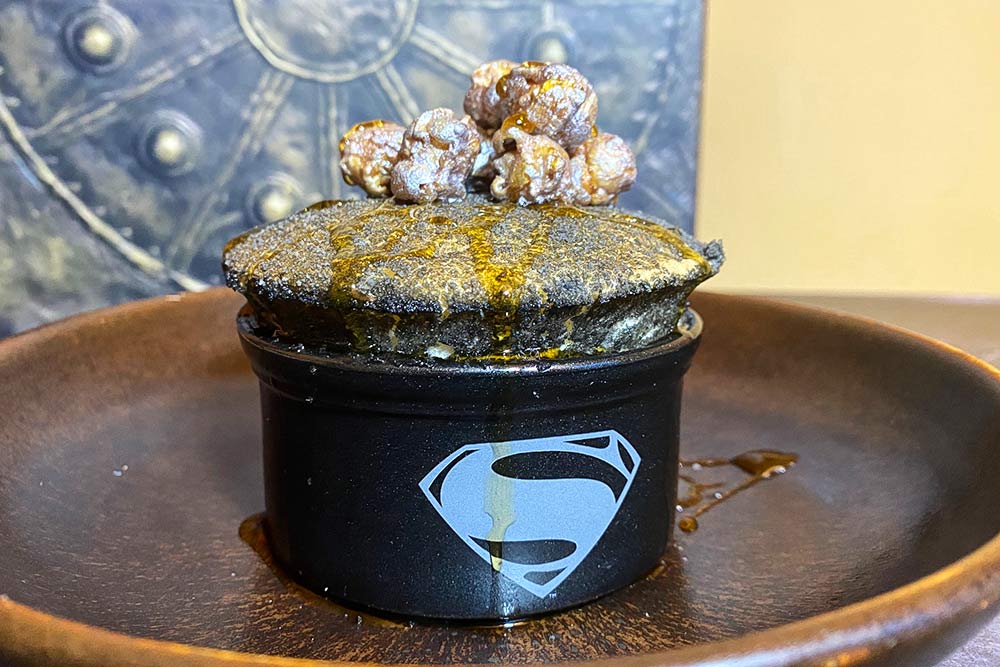 For the souffle, you'll need to provide your own eggs but otherwise it's just a bit of whisking and mixing. Full points to the instructions - both the cards and the how-to videos are simple and to-the-point. The souffle is covered in maple sauce, and topped with silver caramel corn (from Smallville, of course). 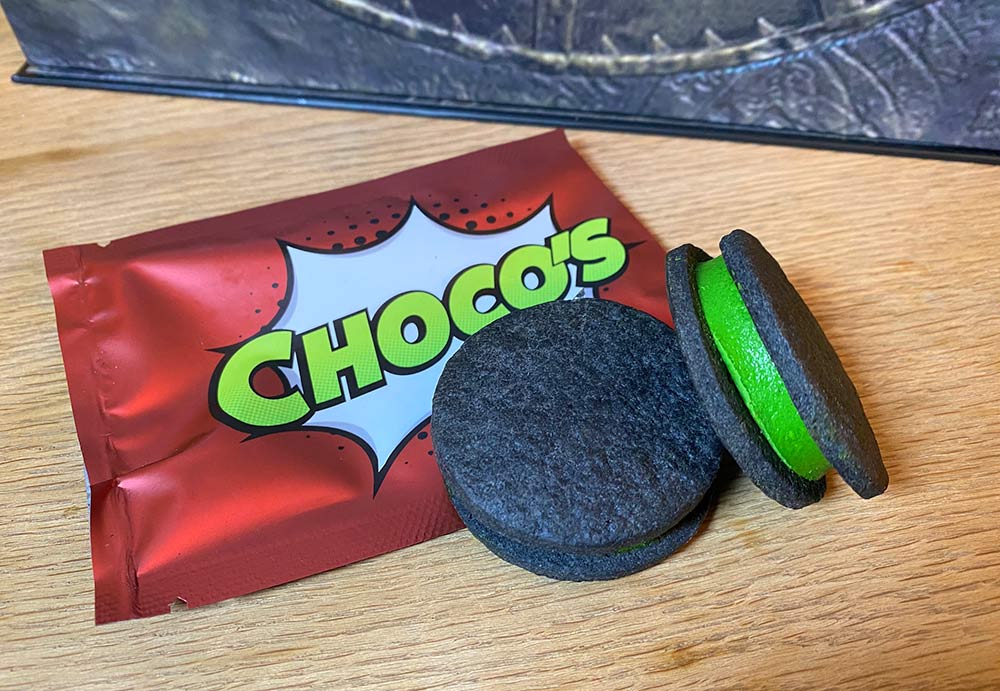 The cheese course. These are the DC comics version of a certain black cookie - but this one's actually a Jalapeno salsa and cheese cookie. 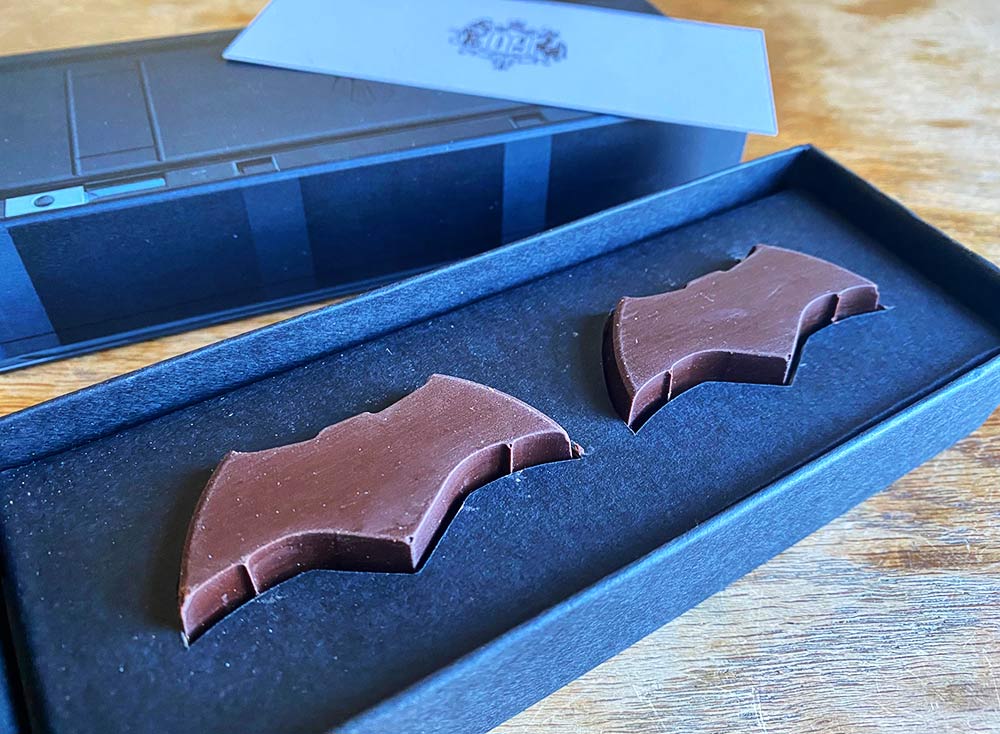 In addition to the above, there were also smoked vanilla marshmallows with a little scent stick, called Themisciran Fire (that's the Wonder Woman entry).

Any drinks in there?

A few. Alongside a couple of cans of light/dark beer from Koul Brau (apparently a subsidiary of Lexcorp) there's also an energy drink in powder form and... 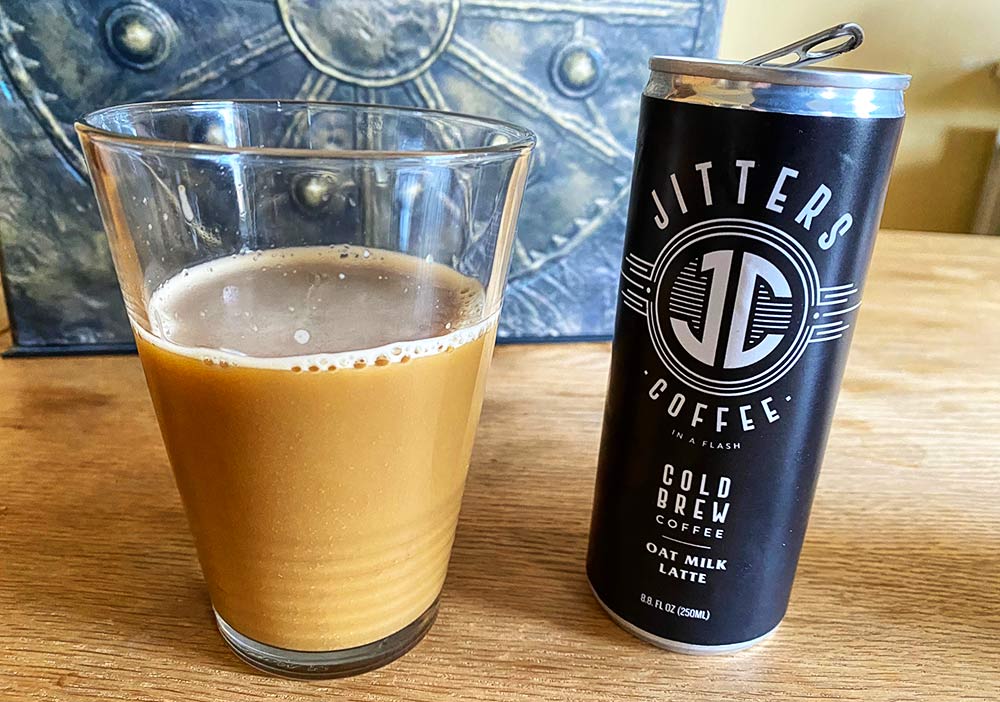 Have to be honest - the very idea of this box was of immediate interest to one half of Hot Dinners. If you know a little too much about all of this stuff, you'll see that the box is actually extremely well done - themed but actually not in a garish way. Instead, it's a very knowing take on a behemoth of a brand. And on top of that, everything in the box was very enjoyable. It certainly bodes very well indeed for the full restaurant when it arrives in summer.

More about The Mother Box