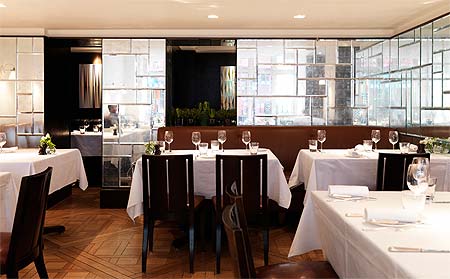 What can you tell me about Quo Vadis?

TV and film folk, media luvvies, foodies of all shapes and sizes all congregate here - Quo Vadis is a venerable canteen for Soho's movers and shakers that's been a restaurant since 1926 and was the former home of Karl Marx. Between 1996 and 2007 it was co-owned by Marco Pierre White and Damian Hirst, and then by White alone before ending up in hands of Sam and Eddie Hart, who also run Barrafina and Fino. It has a new chef, Jeremy Lee, who arrived here in January after 16 years in the kitchens at the Blueprint Cafe and with a new look dining room.

In the heart of Soho on Dean Street.

You're not short of drinking holes in this part of town - with too many pubs and bars scattered throughout Soho to mention. In the immediate area, a quick half at the French House should do the trick. If you're lucky, you should go with a member of the club upstairs and you can have a cocktail there.  There is a non-member's bar here, although we did find it hard to attract the barmen's attention, despite it being pretty quiet.

Given a choice, the first part of the dining room nearest the bar seems to be more buzzy. Ideally you want to have a banquette table with yourself facing towards the door so you can properly enjoy watching everyone coming and going. The famous stained windows have had their secondary (and dingy brown) glazing removed so if you want a view out on to Soho, ask for a window table.

The menu is divided into multiple sections - mains, grills, starters, pie of the day, light bites, oysters and more.  It's a little confusing at first glance - but beautifully designed with a main illustration changing daily. We also loved the addition of the weather and temperature at the top.

Of the choices, there's no question that the single must-have dish is Lee's smoked eel sandwich on toasted sourdough with horseradish.  It was a hit at the Blueprint cafe and here it has a section all to itself. Packed with soft, fat chunks of eel, oozing with creamy horseradish it's a knockout. The only trouble is what to have with it. We'd certainly recommend it as a starter but given that we were going to share the sandwich anyway we also went for two light bites and a starter alongside it.

Of the first two, the potted beef was nice, but a little tame - but the baked salsify was fabulous - a fat rectangle of salsify covered in wafer-thin pastry and deep fried before having parmesan grated all over it - a very good way to treat a piece of root veg. Our starter - mallard duck with pickled prunes was also good - thin pink slices of duck enlivened by the accompaniments of peppery watercress and juicy pickled plums.

For main courses we plumped for the loin of lop with braised beans and the pie of the day - rabbit & pork pie. The pie was the clear winner - a decent size, with buttery pastry with meltingly soft meaty filling. The lop was nice, but if we're being brutally honest, the braised beans suffered by comparison with the beans we had at Pitt Cue Co recently.

On to desserts - and you're really, really going to want to leave some room for these. A diminuitive pot of rhubarb and vanilla custard would, on any other day, have been one of the nicest ways to finish a meal we'd had in a long time. However, it was beaten by the almond tart with vanilla ice-cream and roasted pear. This was a thing of joy - toasty, crunchy, chewy gorgeousness. We almost ordered another slice to take with us, thought that would look too piggy, and regretted our restraint as soon as we'd got home.

To be honest, we didn't look too much at the wine list. We perused the menu with a glass of Jenkyn Place from Hampshire which was a lovely fresh fizz, but after that put our fate in the hands of owner Sam Hart. He picked out a glass of Chianti Rufina 2009 Selvapiana to go with the pie and a St Joseph 'offerus' 2009 S L Chave which was light and fruity and didn't overpower our pork.

For a top location in Soho and one of the buzziest restaurants at the moment, the menu represents really good value. Dishes are on the smallish side, but with light bites from £3.50 and mains starting at £14 you're really only paying gastropub prices for an elevated experience.  In addition to this, there's an all-day theatre menu for £17.50 for two courses and £20 for three, which we think is astonighingly good value for money and highly recommended before or after a cultural night out.

It's always exciting to see an old favourite get a bit of a gussying up and the arrival of Jeremy Lee (together with a fresh new look for the dining room) has done just that for Quo Vadis. Lee loves bounding into the room to check on how diners are getting on and there's a palpable buzz in the air. The food's great and the ever changing menu will mean it's worth coming back again and again - even it it's just for another fix of the eel and horseradish sandwich.

Find out more about Quo Vadis

Hot Dinners were invited to eat at Quo Vadis. Prices are correct at the time of writing.