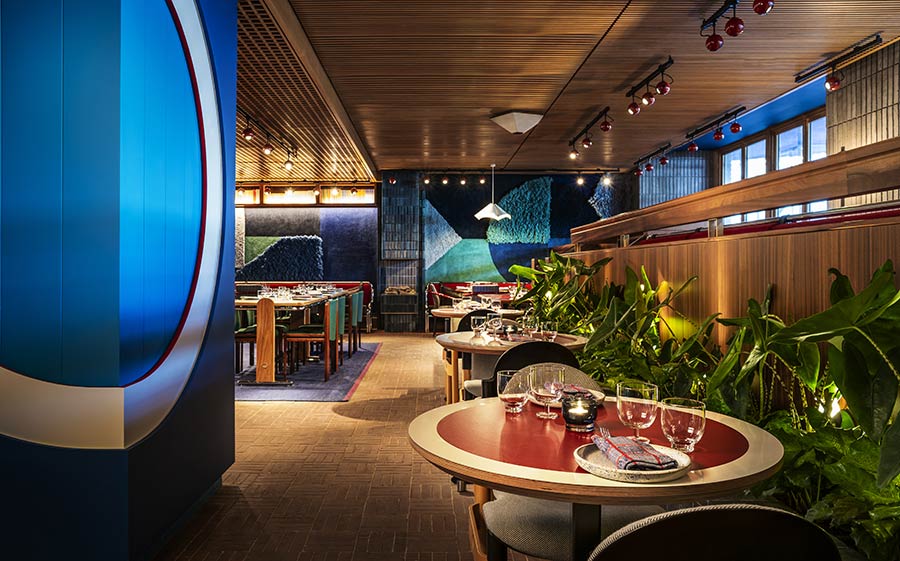 A look at Isla (we were sat up to the right, looking out onto the terrace)

First off - what's The Standard?

The uber-hip hotel group started in NYC - it was set up and used to be owned by André Balazs of Chiltern Firehouse but he sold it in 2017. This is their first hotel outside of the US.

And how does Isla fit into that?

It's one of two new restaurants on the ground floor of the hotel, both of which have a menu that's been created by Adam Rawson, working with The Standard's Angela Dimayuga. There's one more restaurant to look forward to here - that's Peter Sanchez-Iglesias (from Bristol's Casamia) who will be taking over the top floor with an as-yet-unnamed restaurant.

As for Isla, that's a restaurant of small-medium plates which is primarily focused on cuisine from the coastal areas of Britain.

Where is The Standard?

It's right opposite St Pancras, on the other side of Euston Road - it's taken over (and utterly transformed) the building where Camden Council's offices used to be. Head to King's Cross underground and it's about a couple of minutes from there.

It was a little hard to tell on the night we came in, as there was a party in full swing. That took up a large part of the restaurant, so there wasn't an opportunity to take a good look around. But it seemed that Isla has the potential to be the party section of the ground floor, while Double Standard has more like a trad pub feel.

Where's good for a drink before/after?

The best bet is probably the other area on the ground floor, Double Standard. This much more resembles a pub but has a late licence and is blessed with a quite extensive terrace out the back. That's not obvious from the front so if you're looking for alfresco drinking in the King's Cross area, it should be well worth heading around the back for a look.

In Isla itself, there is a short cocktail list ranging from £10-12, many of which are their own takes on classics. So there's a Mediterranean Martini (Gin Mare, limoncello, Mondino amaro, lemon, olive - £12) or a Thyme Collins (Tanqueray London Dry gin, lemon thyme, elderflower, Chartreuse, lemon, aromatic tonic water - £12) as examples.

And onto the food...

Adam Rawson's menu is mainly divided into three sections - from the sea, soil and land. And adding to that are starter snacks and sides. We think it's best to stick to our tried and tested small plates ordering technique here. So just order what you want on the table at any given time, and go back and order more as you need it. The kitchen was pretty speedy so this should work fine. Some of the plates are on the larger size, so this will help you pace things.

There seems to be an autumnal produce touch to the menu - ceps and pears, for example - so we imagine these dishes will be on the menu for a while yet. Here's what we had on the night. 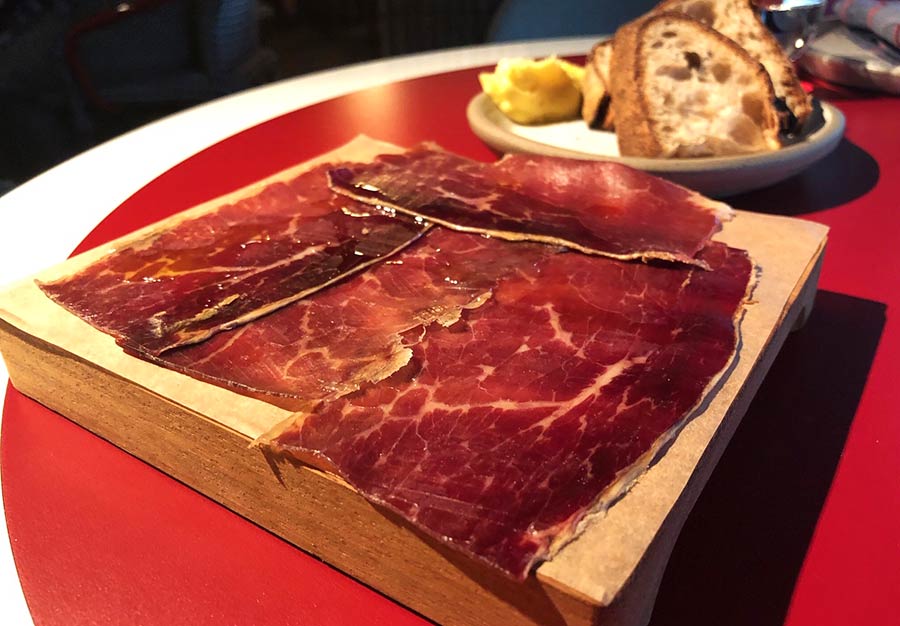 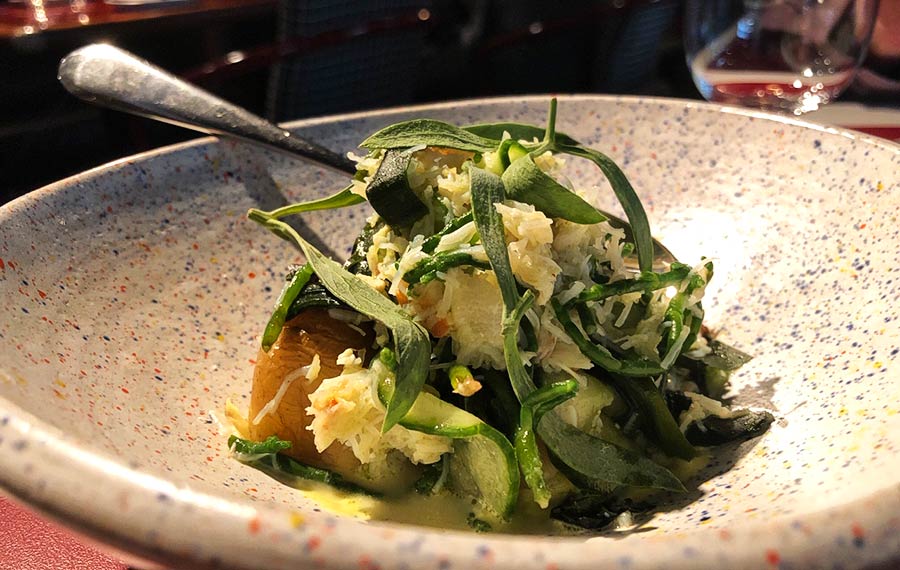 Crab, papas arrugadas, seaweed (£15) - this divided the table, to be honest, but one of us quite liked the potatoes in the mix. 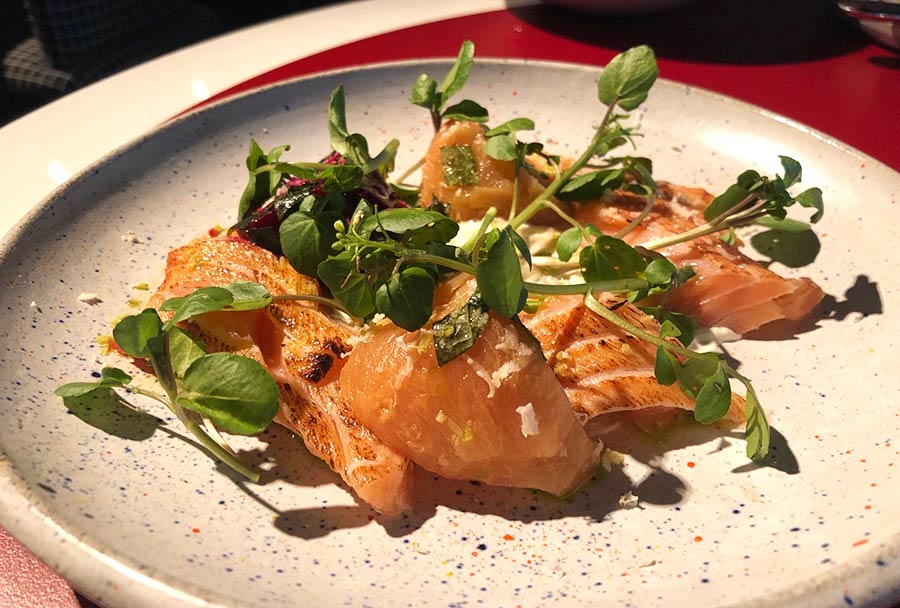 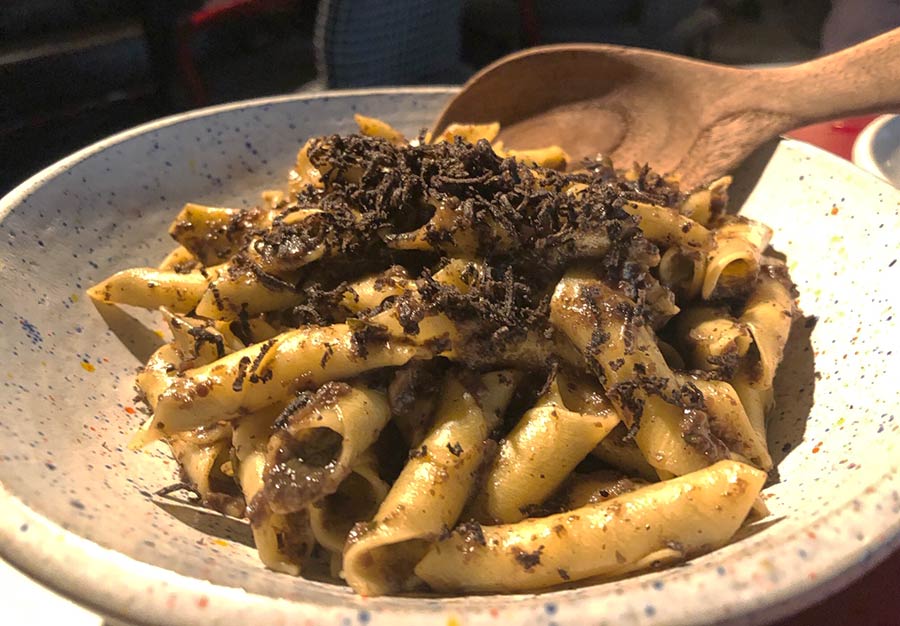 Fuzi, cep mushroom, yolk, black truffle (£14). A large dish of quite excellent pasta - easily enough to be considered as a main course and then some. 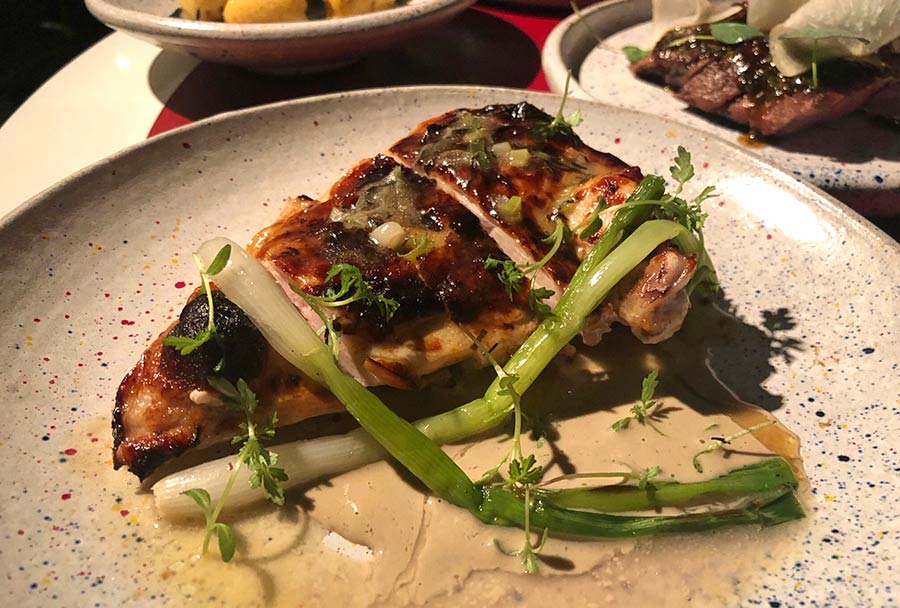 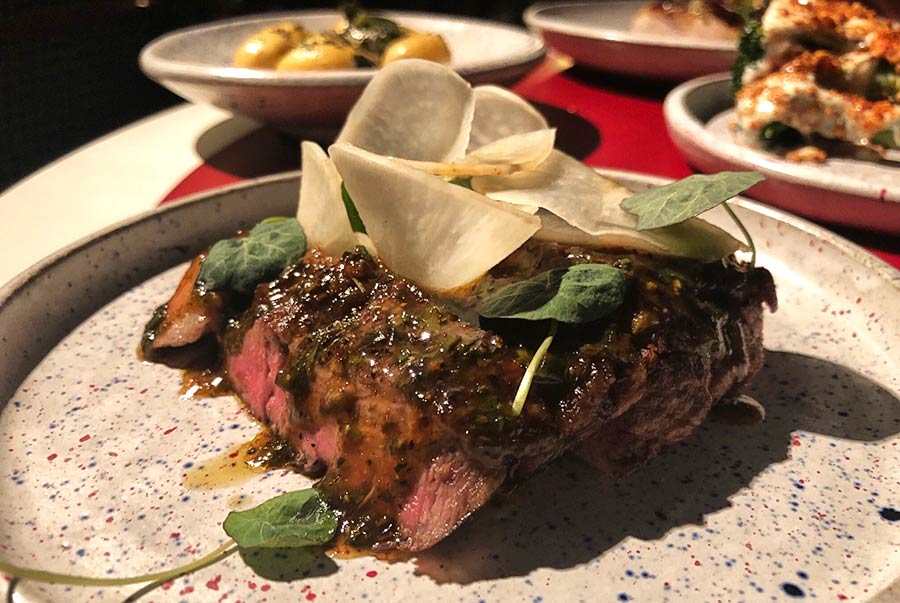 Iberico pork, chimichurri, daikon (£21) - another favourite at the table. 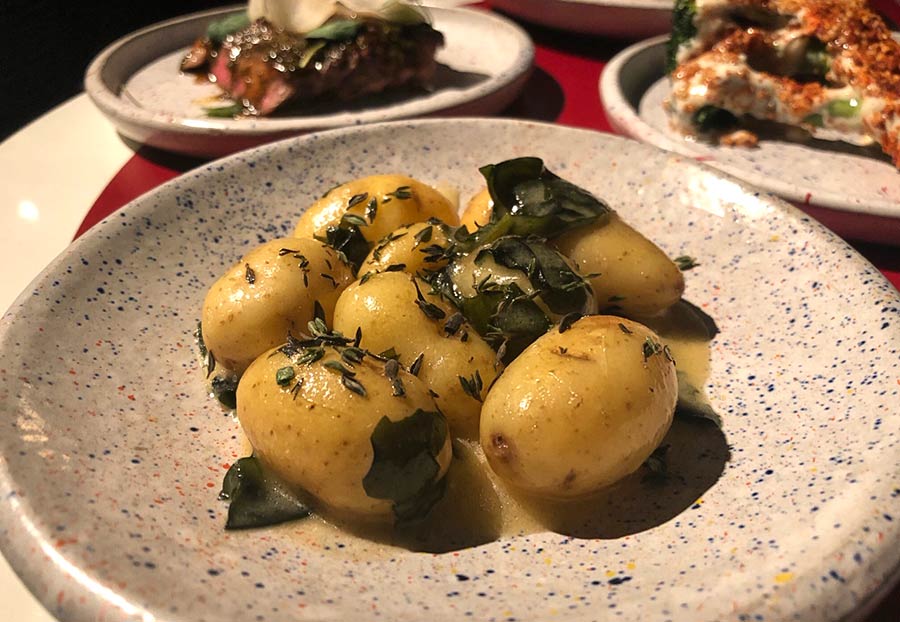 Potatoes with smoked garlic miso (£5) - these were standout excellent, smothered in a garlic miso sauce that we'd like bottled up and sent to us, please.

Obviously, you'll want to head to anything in the soil menu. We think the fuzi is a must, but other strong contenders are "Burrata, pickled courgette, dill (£10)", "Marinated tomatoes, basil, panzanella (£7)". We also checked in with Felicity Spector who recommended the artichoke risotto with Swiss cheese (£14) and this broccoli: 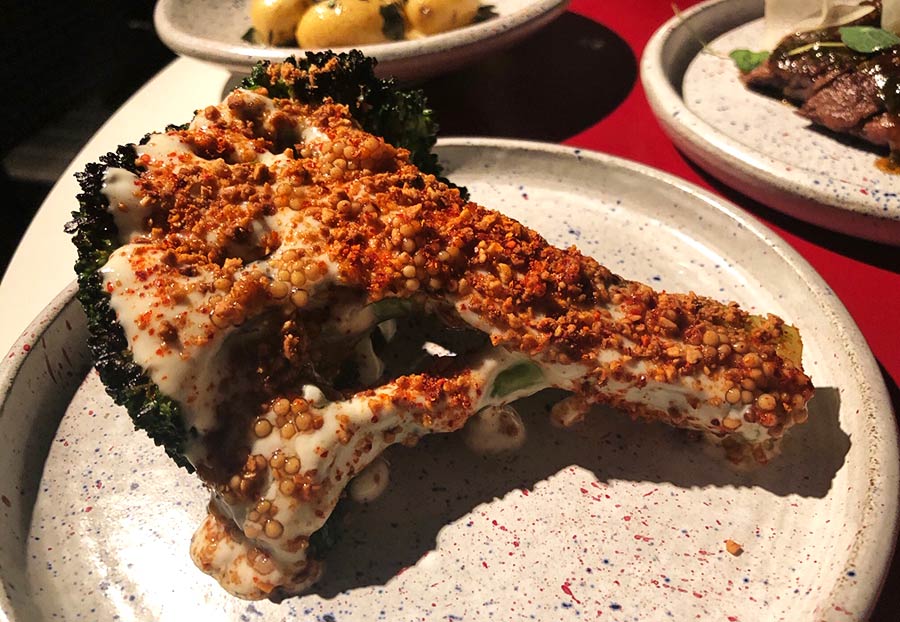 Dessert has one element that is well worth a look - but that comes with a caveat... 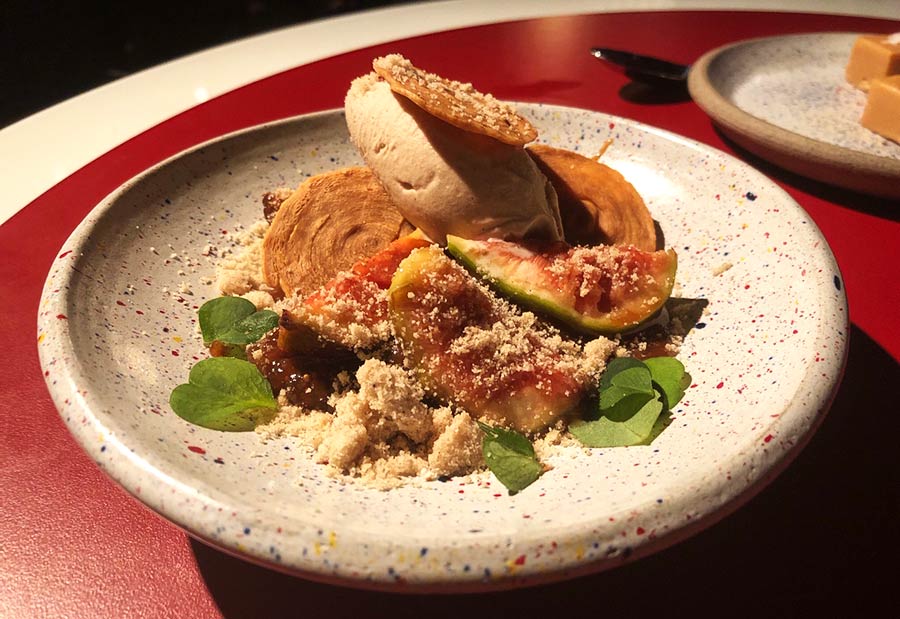 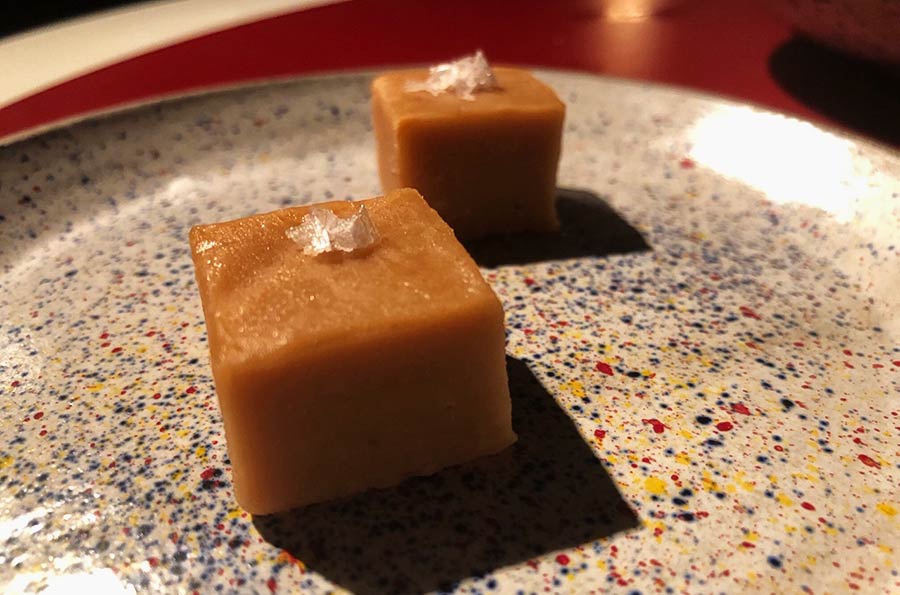 Miso Fudge (£7) - as with the miso potatoes, these were absolutely excellent. But we have to admit that £7 for two pieces of fudge is definitely on the pricier side of things. If that doesn't bother you - then these are a must-order to end the meal.

Wines start at £28 (a "Planalto" Casa Ferreirinha from Douro for white and an Alicante shiraz for red, with a large choice of bottles under the £40 mark (or you can head up to the £99 Amarone if you fancy). There is also a large selection of "Sparkling" on the menu, including sparkling shiraz from Spain and quite a few English sparkling wine options too.

Adam Rawson is certainly sending out some cracking dishes at Isla - with the pasta and the amazing miso potatoes coming up for particular praise. We're not quite sure about the space - the party made it a little hard to gauge - and some of the pricing of the food is a little inconsistent - but there is real quality coming out of the kitchen.

It's early days yet and we think that Isla combined with the potential of Double Standard means that the Standard already has an impressive offering on the ground floor. We'll be back to try those burgers next door and the well-priced wine list makes this a very handy place to drop into.

Hot Dinners ate as guests of Isla. Prices are correct at the time of writing.

More about The Standard Hotel London