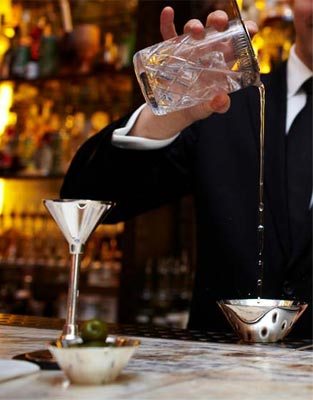 There's been a lot written about where to get the best martini in London and to be perfectly honest, we're not such connoisseurs of the drink that we'd dare to proclaim one bar's efforts the best in town. That said, we had such a brilliant time drinking them the other week at the Artesian bar at the Langham Hotel, we'd quite happily recommend you'd at least include it in your quest.

This super-central slick hotel bar (a few minutes walk from Oxford Circus) is already popular with BBC folk from nearby Broadcasting House. We popped in early on a Thursday night and it was pretty much packed. Both bar and hotel were given a bit of a makeover not too long ago, so the bar retains all the glamour of a five star London venue, with some of the stuffy edges knocked off. It's really rather beautiful, particularly when you perch yourself up at the bar.

And in charge of that bar is Alex Kratena - a mixologist of international repute who's been at the Langham for five years. He welcomed us with a diminutive slipper glass of house champagne with a tiny, deeply-scented rose floating in it - "to clear your palate" he explains. We fell a little bit in love with him at this point.

Alex has been busy raising the bar's profile (winning World's Best Cocktail Menu 2011 at the 5th Annual Spirited Awards was a start) but had become slightly irked by the bar's lack of a signature martini. "Our focus has always been rum, but the lack of our own martini was starting to annoy me."

Having picked Tanqueray No 10 gin to start with, he then brought in Martini's Master Botanist Ivano Tonutti who came up with five bespoke vermouths for Artesian. So you can choose Tokyo with  yuzu and green tea, New York’s green apples and canella, Parisian lavender, Mediterranean herbs and anise, Milan espresso, saffron and almonds or London's rhubarb and elderflower. The frozen gin is stirred with your choice of vermouth and served up in a silver cup that detaches from the stem, which is a fun idea that has the more serious benefit of keeping your martini ice-cold. And it's really, really good. We tried both the Tokyo and London versions and they were both excellent - each with a distinct, but ethereal taste coming through from the vermouth.

It seemed rude not to get Alex to show us a few more drinks (and happily while we were there, little plates of lovely, free canapes were served up to everyone in the bar - try and be here around 7pm which is when they came round). So we tried a Sherry Cobbler and another mad rum-based drink that by the time morning came round, we'd forgotten the name of. It was a good night.

So to recap - Artesian bar's well worth a detour any day of the week and has to be a pretty much perfect spot to come after a hard day's slogging up and down Oxford Street's shops. Better still, forget the shopping entirely and come straight here where Alex will take good care of you. And tell him we sent you.

Hot Dinners were invited to eat at Artesian. Prices were correct at time of writing.