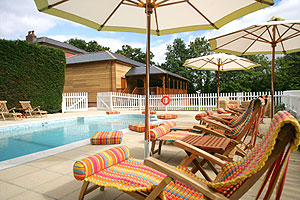 Barely 90 minutes from London's Waterloo station, the Hotel Terravina is a pretty much perfect overnight stay for anyone who is interested in food - and more particularly wine. It's owned and run by Gerard and Nina Bassett whose provenance as far as hotels go is impeccable - Gerard spent six years at Chewton Glen, Nina was a hotel inspector and together (with partner Robin Hutson who now runs Limewood) they launched the Hotel Du Vin chain.

When that was sold in 2004 Nina and Gerard toyed with the idea of heading off to open an inn somewhere in the Napa Valley. Instead - and luckily for us - they've brought a little slice of that Californian charm to the New Forest.

The hotel's idyllic setting - just yards from the open forest where New Forest ponies graze at will - matches the work the pair have done on this once old-fashioned and chintzy hotel. Now it's all cedar-clad and modern - but they have kept one remnant of the old hotel, the outdoors swimming pool. As we lazed in the water on a Friday morning in the glorious sunshine, it was all we could do not to text pictures of ourselves to unlucky office-bound friends

Our room - Vin Doux Naturel (or plain number 4) was a large, comfortable room with a beautiful shower room and one of the most massive (and secluded) roof terraces we've ever seen - big enough for a table and chairs, two recliner beds and there'd still be room to swing a whole sackful of cats. The room has plenty of thoughtful touches - obviously a decently stocked minibar - and some clip-on lights for anyone who likes to read into the small hours.

Where is it?
Netley Marsh, Southampton

Suitable for?
Obviously oenophiles, but it also manages to be perfect for romancing couples and families alike.

Room to choose?
Definitely ours - number 4. That massive terrace is just calling out for a late night bottle of bubbly under the stars. If you're on a budget - try number 6. The room is the smallest in the hotel, but the terrace is the square footage of most London flats.

But down to business; there's really one main reason to be at Hotel Terravina and that's the food and wine. Gerard had just won the World Sommelier Championship so were expecting great things from the wine list. Sadly a previous engagement meant he and Nina were out the night we stayed, but a large team of eager young things were on hand to make the evening go smoothly. Chief amongst those was Head Sommelier Laura Rhys who last year won the UK Sommelier of the Year and has been with Hotel Terravina since it opened. (Basset clearly knows how to spot a rising star - he also the mentor to Xavier Rousset of Texture and newly-opened winebar 28-50).

We began with a ravioli of crab sole and basil, where the richness of the fish was balanced with a lemongrass-infused bisque (which was paired with a French sauvignon) and a dish of seared scallop, served with a golden nugget of slow braised pork belly served with chorizo foam and pea shoots paired with a creamy Thelema Mountain Vineyards Chardonnay from Stellenbosch For mains we followed our waitress's advice and picked a bestselling dish - the Trio of lamb (roast best end, confit shoulder and braised tongue) - the lamb we can assure you didn't die in vain for this gloriously meaty trio - the confit in particular was meltingly delicious. It was helped along with a suitably robust New Zealand Pinot Noir from Hawkes Bay. We also tried the vegetarian option - often a dud deal - which here was a courgette, feta cheese and tomato lasagne which was perfect for this summer's evening and was paired with a 2008 Julienas. If there was a slight off-note, it was the dessert -  the strawberry pannacotta was much too firm rather than wobbly as it really ought to be. But the Austrian Grüner Veltliner Eiswein Laura chose, helped things to a satisfactory conclusion.

Breakfast the next morning, lived up to the promise of the night before. Instead of the horror of the usual hotel buffet table, we had a cooked breakfast to order which was just the ticket to redress any of the excesses of the night before. Another quick dip in the pool and we were ready to return to London with a newfound spring in our step.