[SIGPLUS_EXCEPTION_SOURCE] Image source is expected to be a full URL or a path relative to the image base folder specified in the back-end but /blog/2011/riding/gallery is neither a URL nor a relative path to an existing file or folder.
0
Shares 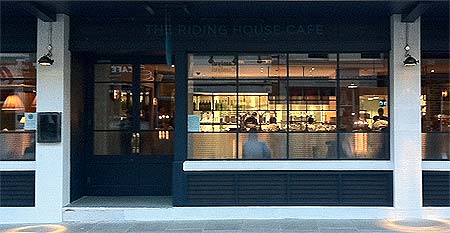 Where is it?
Situated north of Oxford Street in an area not blessed with dining opportunities, the Riding House Cafe takes up the rather large premises previously occupied by Bar Ha Ha.   And also by something else, but we can't remember exactly what...

Who's it suitable for?
We think it's ideal for meeting friends for a casual bite. It's also good for meeting clients in the restaurant's bookable area if you're with one of the media agencies in the area. The dress code is pretty casual.

Where should I meet my fellow diners for a pre-dinner drink?
As it's pretty much the best place in the area, we'd suggest meeting there. Try the cosy-looking lounge area - right as you head in the door, or sit up at the bar itself and order yourself one of their many cocktails.

What should I expect when I walk in the front door?
We had recently seen the Riding House Cafe written up in a Wall Street Journal piece as a New York-influenced eatery and it certainly has that vibe. Bare brickwork, bar dining, sharing tables and more all reminded us of places we've visited in NYC.

In addition to this, there are some particular British affectations throughout with stuffed squirrels used as lighting fixtures and industrial taps used for the sinks in the loos. It's also surprisingly large so we think there's a very good chance of grabbing some dining space if you decide to chance it at the last minute.

And where should we sit?
Well, only half of the space is available to book.  The rest, including space at the bar, is left free for walk-ins. If you're up for a bit of table sharing, we think that the most fun place to set yourself down looks like the long table in front of the main door - you'll get a good view of the kitchen from there.

What would you recommend ordering?
Riding House Cafe serves the now common "small plates" for starters and traditionally sized mains and desserts.  So for starters, we went for a selection of four dishes - particular standouts being the steak tartare with toast and the veal and pork sausages with lentils, mustard and sage.  All of the starters were excellent although we'd have liked to try the slow roasted lamb shoulder which wasn't on the menu during the soft launch period.

For mains, we tried the Titchfield burger with foie gras and fries and the Aberdeen Angus sirloin. The steak was cooked a little rarer than ordered, but we'll put that down to opening jitters although there were no such problems with the burger.  The burger itself was well seasoned and cooked - although the bun did need to be much softer, something which very few London restaurants manage to get quite right.  Fries were excellent.

Is bread included?
It isn't; £1.50 is charged for bread, but it does come with seriously moreish artichoke puree.  Very good quality bread too.

What's the cheapest wine I could get away with?
For reds, it'll be the Albizu Tempranillo and for whites La Brouette Blanc, both at £16.50.  Plenty of wines are available by the glass or carafe.

And how about the cheapest main?
That'll be the spiced whiting at £12.50

Anything for vegetarians?
Yes, there are 2 vegetarian mains and 4 options from the small plates.

Overall thoughts?
Riding House Cafe is a godsend for the area which was in need of a large casual dining place just like this.  Sure, Soho may look close on the map but if you're working in the area, as Hot Dinners has, you'll often want something away from the bustle.  So highly recommended for people in the area and anyone who needs a break from Oxford Street shopping.

Prices are correct at time of writing. Hot Dinners was invited to eat at Riding House Cafe by the owners.