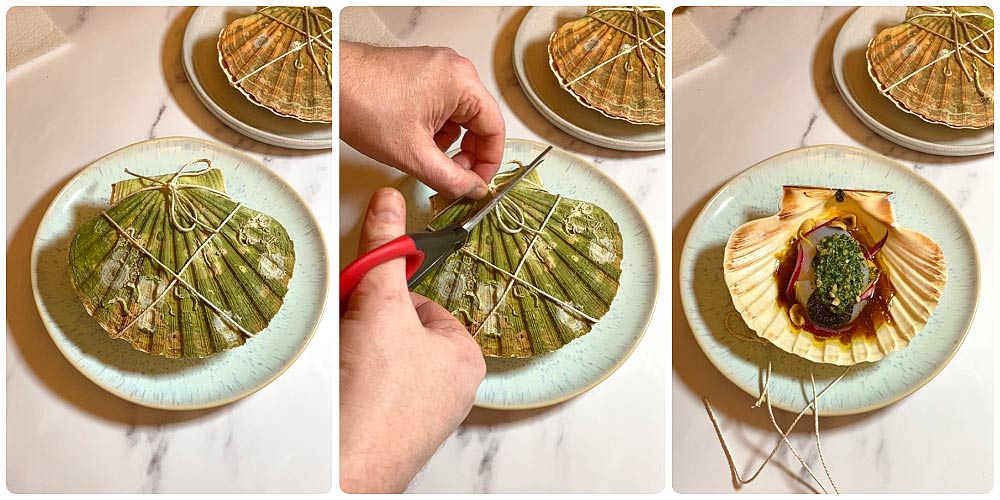 Unveiling the XXL Scallop as it emerges from the oven

What can you tell us about Hélène Darroze at The Connaught?

Hélène has been running the restaurant at the Connaught for over a decade (alongside the two Michelin-starred Marsan in Paris among others). Recently refurbed, it's serves a high end French/European menu. As with all restaurants at the moment, it's closed - but they've just launched Hélène a la Maison, a way to get their three Michelin starred experience delivered. 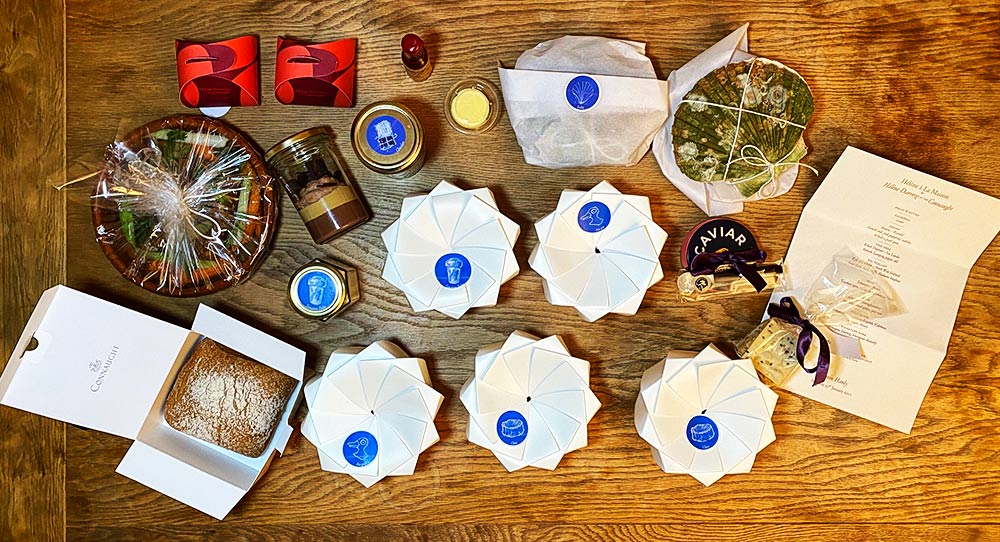 Here's how everything came. The star-shaped boxes are all ready to eat from the fancy box (see the foie gras below) while the veal (wrapped up) and the scallops are placed in the oven as they are.

What kind of cooking know-how is needed from me?

Very little. It is a finish-at-home job and delivered early in the day for dinner that evening. However, many of the dishes are completely ready to eat and plated to perfection in little star-shaped boxes of delight. The few that do need heating are just put into the oven as they are. At this level of cooking, it's been one of the most straightforward meals to get onto the table that we've had delivered.

And the kind of food?

It's very similar to the restaurant - a parade of small but very rich dishes, with a great amount of skill evident throughout. Here's what we had on the night: 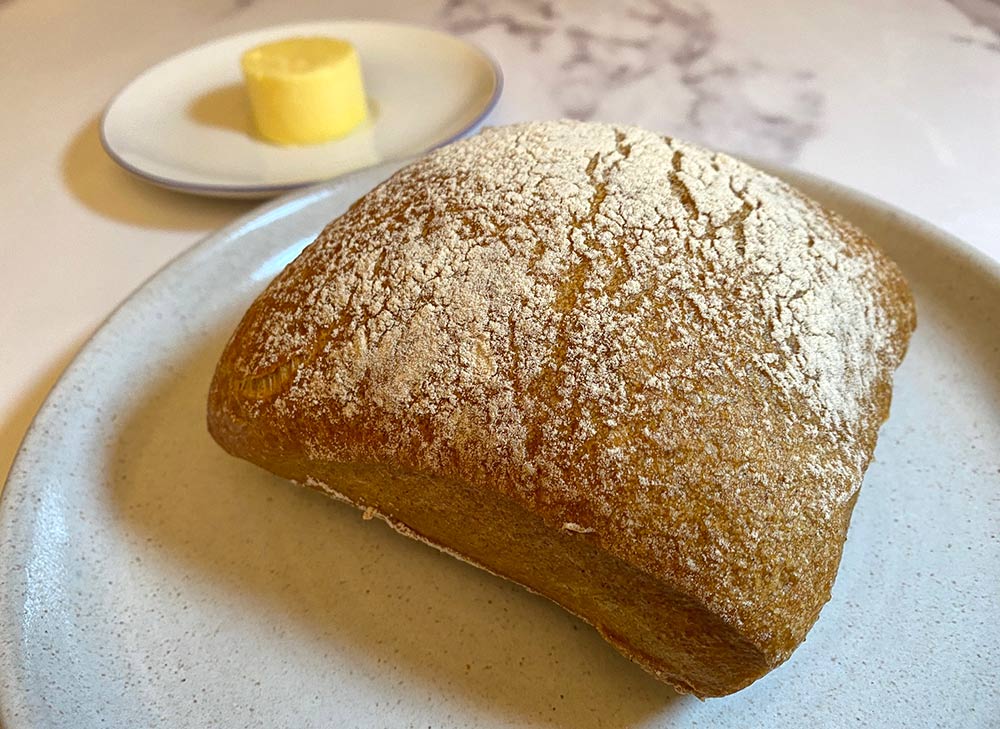 Kicking things off is the bread course - which comes in its own box. Presentation is all. 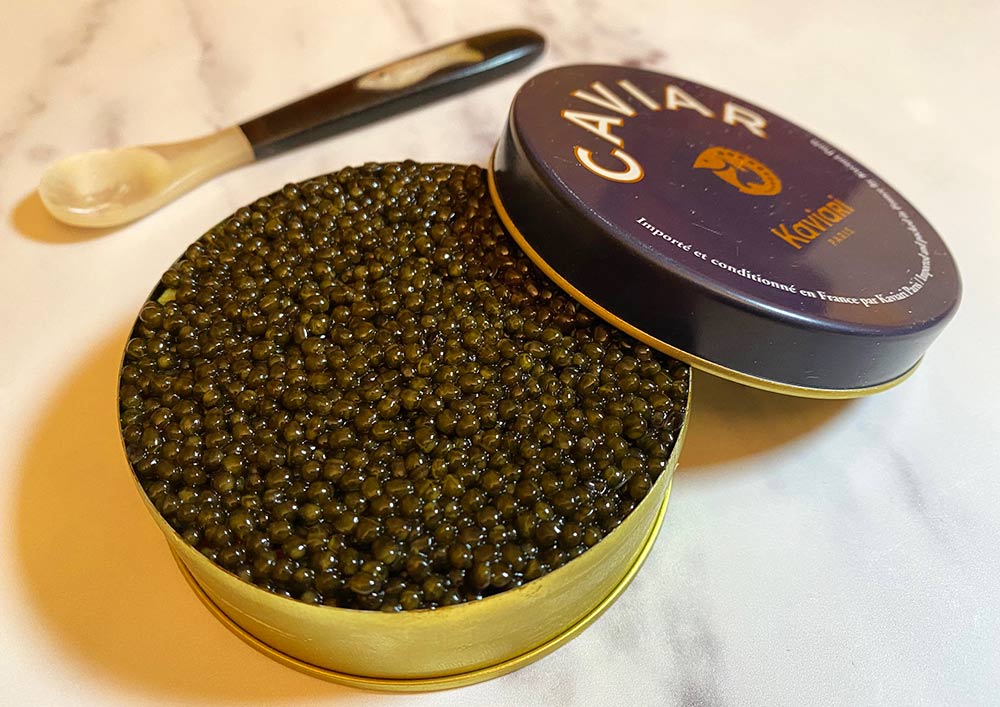 Next up is the Caviar dish. At first glance, this just looks like a huge tin of caviar but... 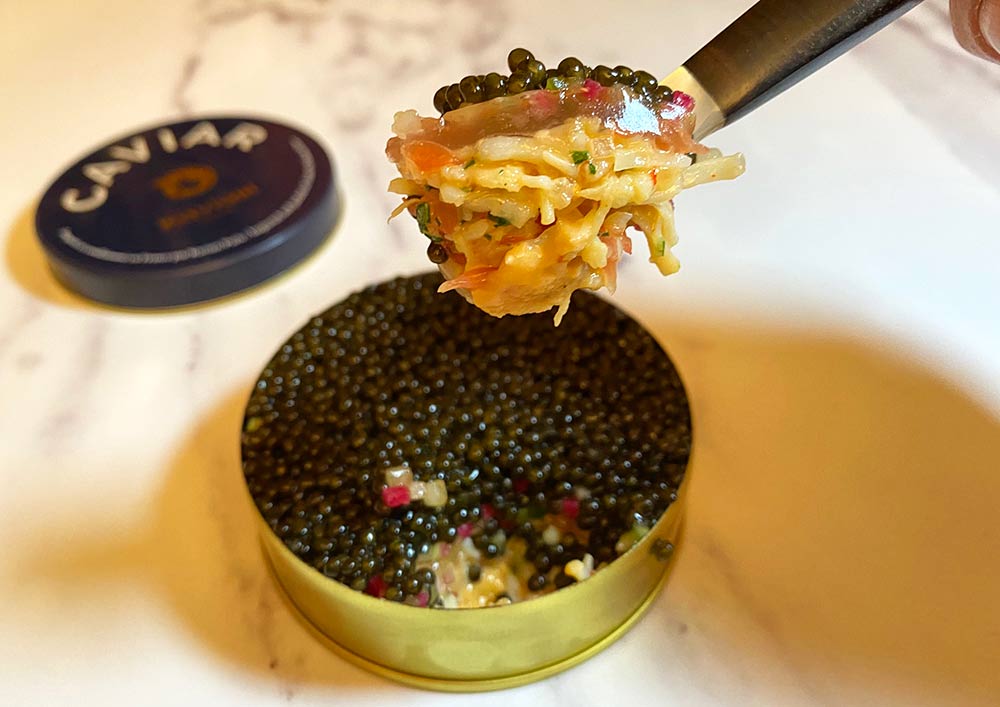 ...scoop into the pot with the pearl spoon that comes with the meal and you'll reveal meticulous layers of Cornish crab, pink grapefruit and teeny weeny bits of radish. Note - this course does come as a supplement of £85 (it is caviar after all), so we'd say this one is for a very special occasion. 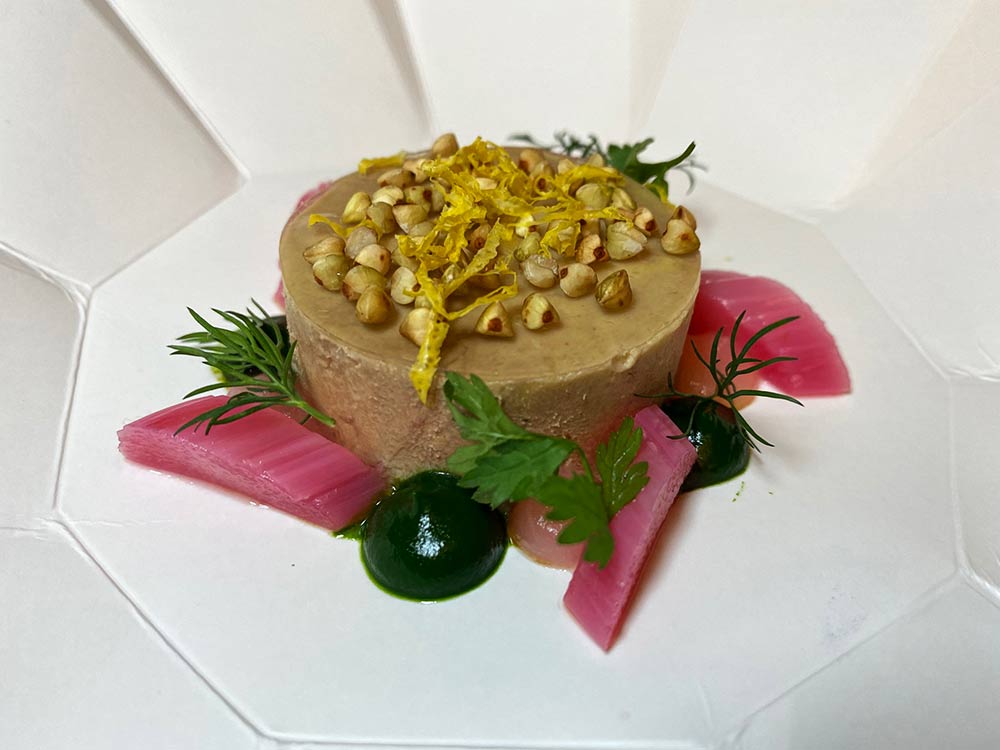 Next up is the foie gras which comes with rhubarb, Lampong pepper and dill. It's the first dish that's served up in the star-shaped packaging that keeps everything plated perfectly, and allows for a fun unveiling moment. Like the at-home version of lifting the cloche. 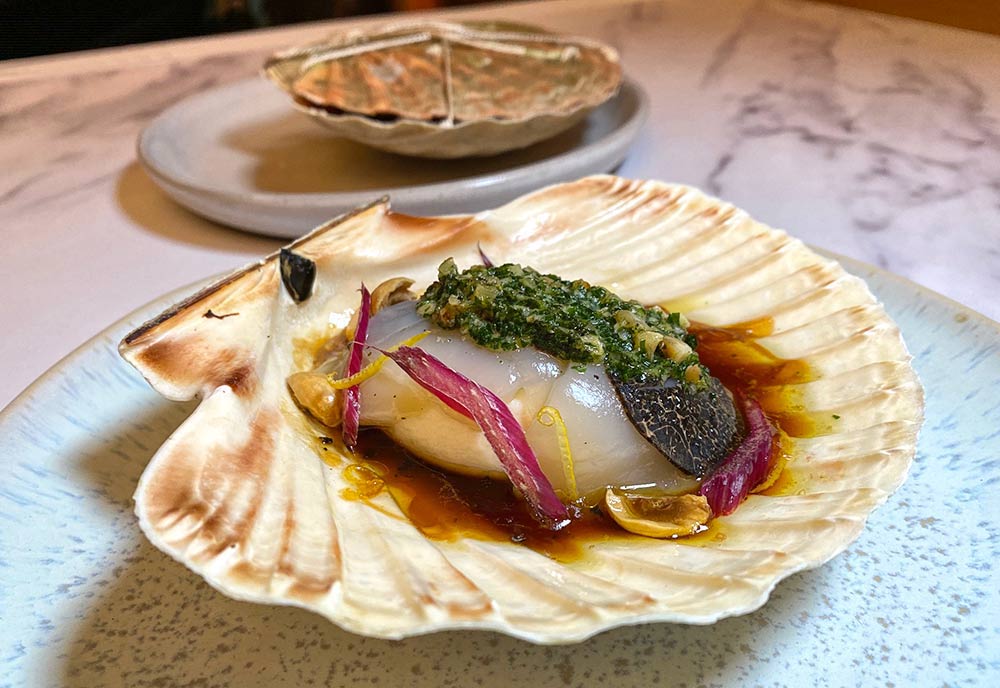 One of two dishes that need a spell in the oven, this is the XXL Scallop. It arrives tied up (as you can see in the back of the photo) and you just put them in the oven for 10 minutes - then cut off the string and you're ready to go (see the image at the top of this page). The scallop is paired with swiss chard, black truffle and piedmont hazelnut. 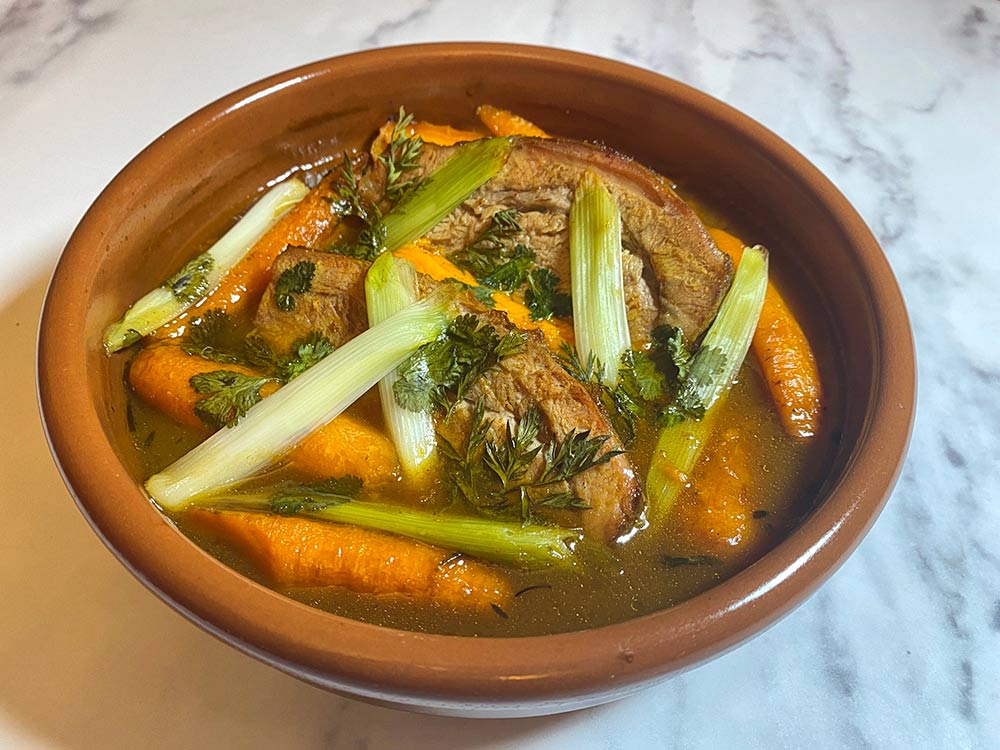 On to the main - this is Limousin veal with Tandoori spices (just a light touch), carrot, spring onion and coriander. It's all wrapped up when it arrives - just chuck it in the oven as-is and then you unveil it on the table. It takes 30 minutes to warm up, but everything has clearly been pre-cooked for many, many hours beforehand - the veal meets the can-you-eat-with-a-spoon? test very well. 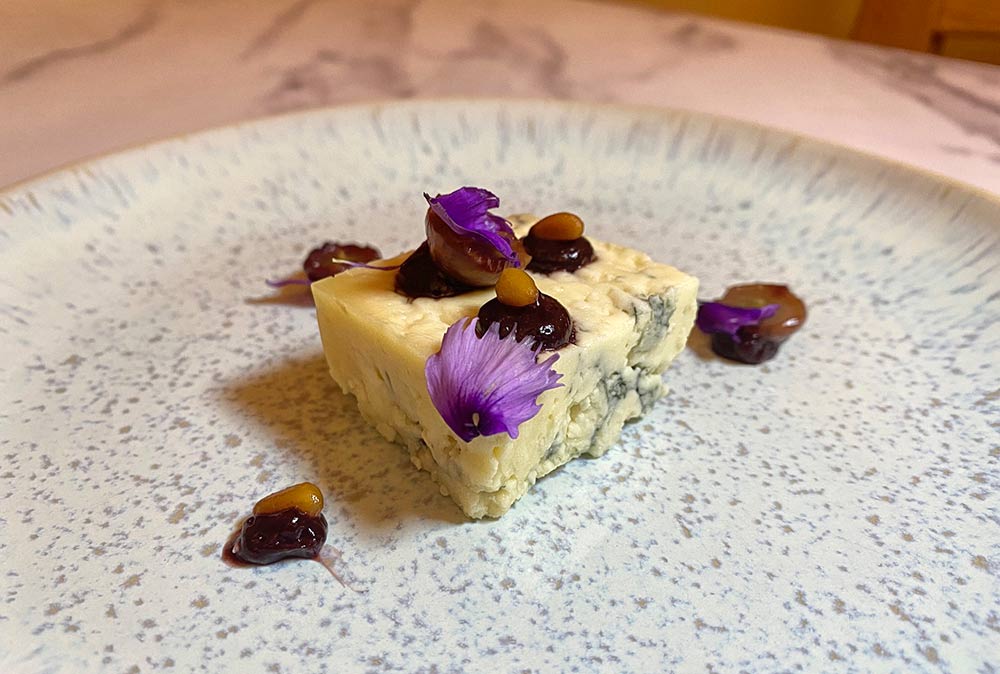 The cheese course - Stichelton - dressed with port, dehydrated grapes and pine nuts (there's also crackers on the side). 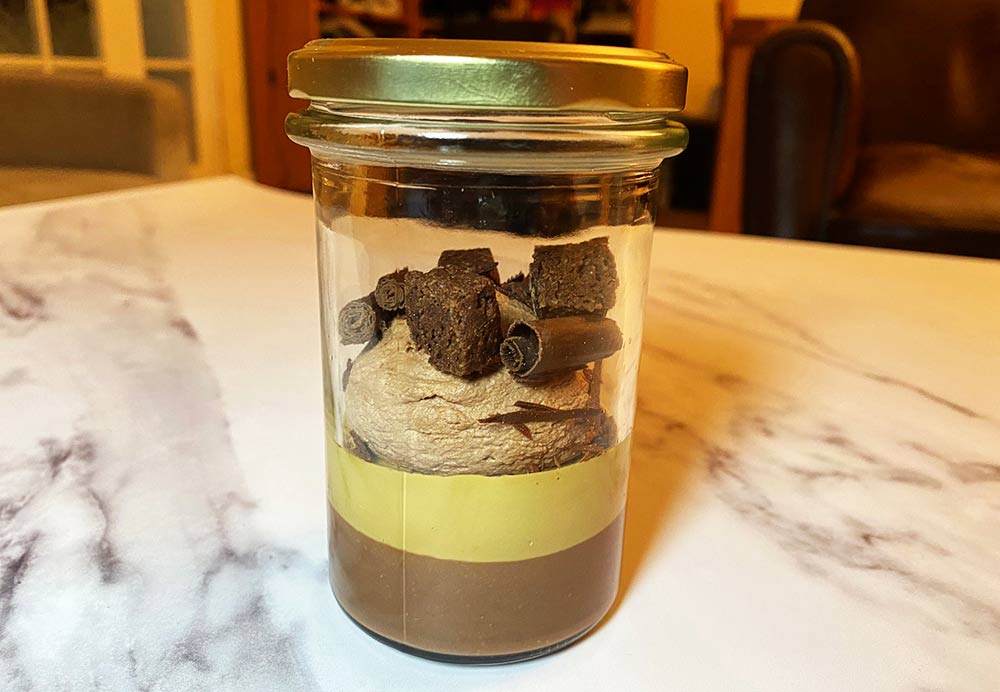 Chocolate - Dominican Republic Tainori with coriander and chicory. Just take the top of the jar and attack it with a spoon. 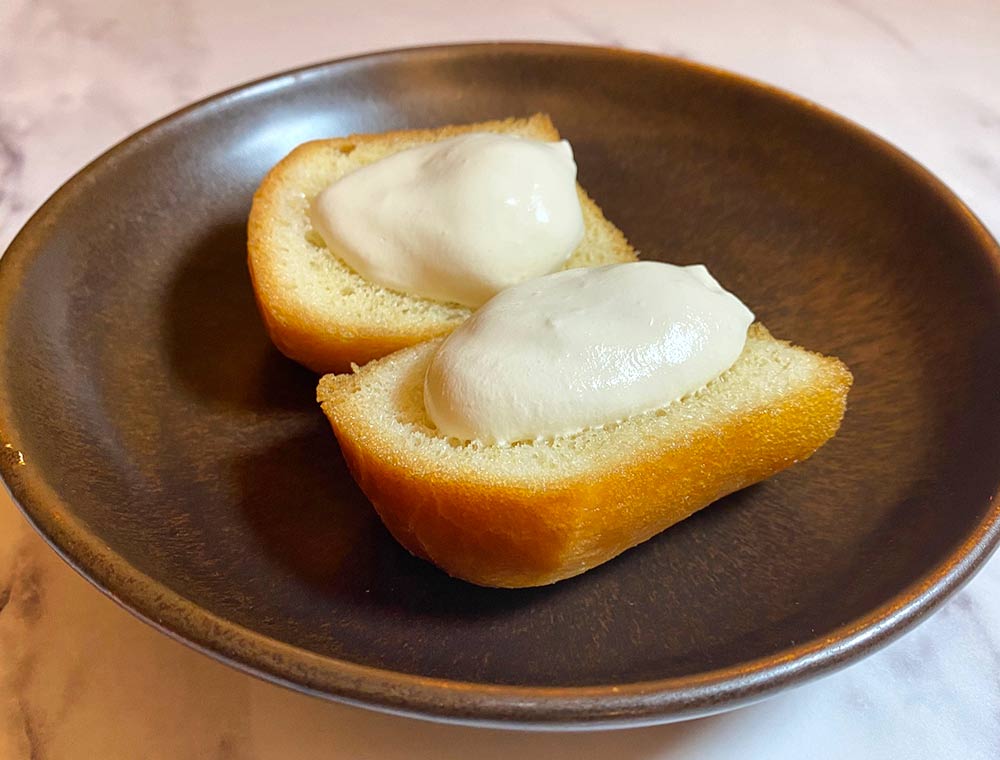 This is another extra course - the Hélène Darroze signature baba. it arrives already soaking in armagnac, with another mini bottle to pour on top, before finishing off with lemongrass chantilly. It's VERY boozy and, frankly, Hélène Darroze creates the best babas we've ever had. Note - this is another added extra for £18, and comes strongly recommended. 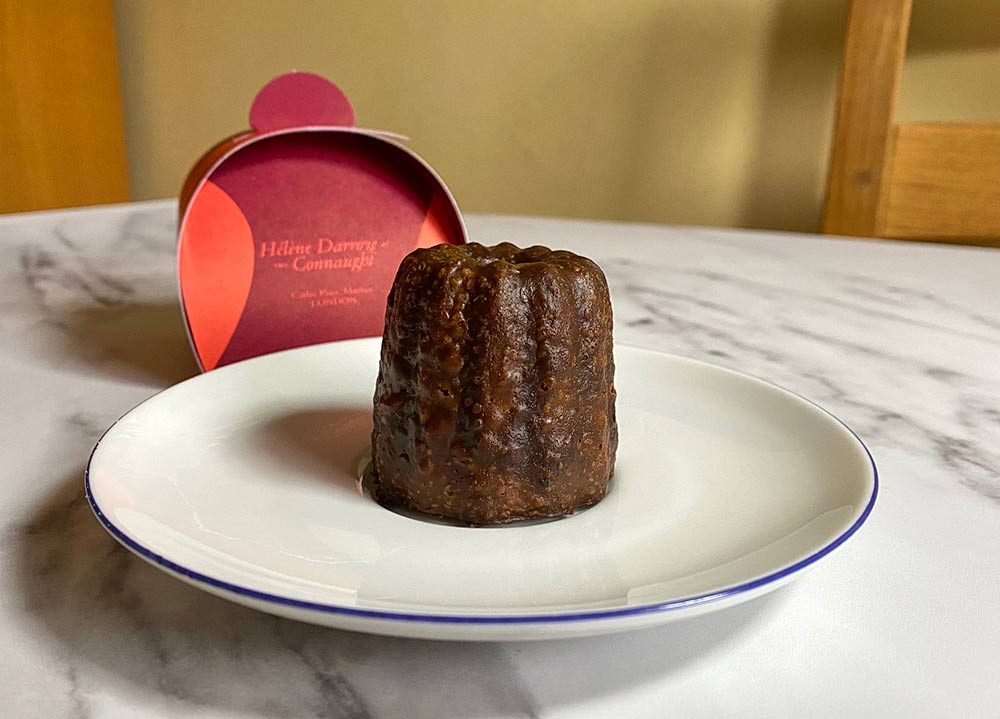 Finally, we finish up with canales, done with a perfect level of caramelisation that we've never managed to achieve when making them ourselves. That's what a three-Michelin-starred kitchen can pull off.

How much does the menu change?

While the same overall structure stays in place, the menu shifts from week to week. Even dishes which do stay on the menu - like the XXL Scallops have some changes, as another week's menu paired those with Tandoori spices, carrot and citrus. So while it is definitely high-end, the service does bear regular revisiting.

The dinner itself can be pimped up by choosing to upgrade to add a half bottle of Krug, but a select list of wines is available to choose from too, prices starting at around £20 or heading up to £495 for a 2015 Montrachet Grand Cru, Domaine Thénard if you're feeling particularly spendy.

Hélène a la Maison delivers a meal that really feels like it comes from a Michelin starred kitchen - high-end cooking that would be nigh-on impossible to replicate yourself. Not only that, but it pulls this off with very little work needed from yourself. Given the intricacy of what's on the plate here, it was a breeze to get on the table and enjoy. If you're missing going out to a fancy restaurant, this is a great way to get them to come to you. Plus, given that it's currently one of only two three Michelin star restaurant in the country doing delivery, it really stands out from the crowd.

Hot Dinners received our Helene Darroze dinner as a gift. Prices are correct at the time of writing.

More about Helene a la Maison

Delivery range: London delivery only, up to 8 miles from the Connaught.

When do they deliver? Fridays and Saturdays