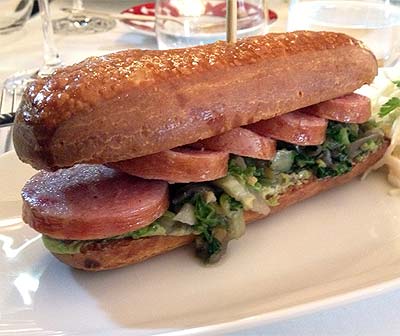 We've already been once to try out Helene Darroze's weekend brunch at the Connaught, but when the chef herself issued a personal invitation to pop back and try the new American dishes she'd added to the menu it seemed churlish to refuse.

So we headed back to Mayfair on a hideously damp and drizzly Sunday morning, happy to throw ourselves on the mercies of the staff there, wanting nothing more than to be cosseted to within an inch of our lives. And happily we were. Half the foodie world were there that weekend - we spotted Observer Food Monthly's Editor on one table, The Wall Street Journal's Bruce Palling on another, not to mention food blogger (and photographer extraordinaire) Kang Leong. This was our kind of place.

As for the new dishes, declaring herself inspired by the American dishes she'd enjoyed for brunch over in the States, Darroze told us she wanted to put some on her menu 'with my own twist'. There's a Connaught hot dog filled with slices of smoked sausage from Morteau and caramelized pink onion from Roscoff with home-made ketchup and a celeriac remoulade. And we had to try her version of Mac 'n' Cheese which was a massive portion, served at the table gratinated with aged Comte and spooned over a cornet of Bellota ham on our plate. Refined heaven.

Service as ever was brilliant - the staff at the Connaught are great at appearing at your side whenever you even think you might need them, and they're super-friendly as well. So if you haven't already been down to try their brunch (3 courses for £55 - but you can go back to the buffet as many times as your waistband will allow and tea and coffee are included) then the next time you have reason to celebrate - or simply can't stand the bloody British weather and need cheering up - this is the place to go.

Hot Dinners were invited to dine at The Connaught. Prices were correct at date of publication.