[SIGPLUS_EXCEPTION_SOURCE] Image source is expected to be a full URL or a path relative to the image base folder specified in the back-end but /blog/2013/tonkotsueast/gallery is neither a URL nor a relative path to an existing file or folder.
0
Shares 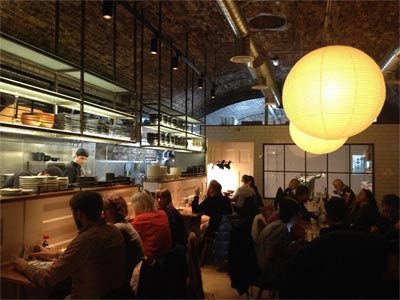 What can you tell us about Tonkotsu East?

No sooner had the Soho-based Tonkotsu been voted top for cheap eats by the Observer Food Monthly Awards, than business partners and ramen restaurateurs Emma Reynolds and Ken Yamada went on to open their second restaurant. This time they’ve ventured east to Haggerston in an arch that used to house a mechanic’s yard.

How different is it to their other restaurant?

While the Soho restaurant echoes the media vibe with a sleek and minimalist interior, the Haggerston spot exudes East London’s more laidback air. The restaurant is an industrial cavern with bare bricks, oversized globe lanterns, long sharing tables, reclaimed doors adorning the bar and metro tiles. Both feature the atmospheric open kitchen but East London has one over its older sister, for through a large window you can see the traditional Japanese noodle-making machine in action.

Built beneath an arch of the overground line on Dunston Street, just behind Haggerston station. Inside sits 40-50 and it looks like they’ll have space for dining outside once warmer weather or heaters arrive.

Obviously the East Londoners are going to lap up the ramen goodness, this is the first of its kind in the area. I imagine big groups of friends taking over the sharing tables after a few beers and couples slurping on the silken noodles at the bar overlooking the kitchen. The vibe is definitely young; it's not somewhere to take your parents.

There’s not much in the immediate area but you can do as we did and enjoy a few drinks in Shoreditch High Street then jump on the ginger line for two stops and arrive at Tonkotsu just 5 minutes later. There is Dukes Brew & Que just round the corner if you can bear to visit for just a cocktail and not ruin your ramen dinner with a rib or two.

Where I should I sit?

With a view of the kitchen from almost anywhere you are in the restaurant there’s no real bad spot but if you want to take everything in, try and sit slap-bang in the middle or furthest away from the kitchen on the right hand side as you walk in.

The single sheet of A4 menu has 12 different starters/sides and four main ramen dishes to choose from. To start, the shiitake and bamboo shoot gyoza, £5, had a beautifully earthy flavoured filling encased in crispy fried dough shells. The salt and sansho pepper squid, £6, didn't fare so well - the pieces here came well battered and seasoned but unfortunately they were chewy and overcooked. The seabass carpaccio, £7, was a simple dish of very small pieces of translucent fish served with a crunchy raw salad but the pumpkin korokke, £5, was the clear winner during the first course. The plump croquettes were filled with a creamed pumpkin puree in a breadcrumb shell and came served with wasabi mayonnaise.

New to the menu in the East is tsukemen, a ramen dish where the noodles and meat are served cold and separate to the hot broth. The idea is to dip the noodles into the broth to warm them and cool the broth at the same time. The concept was a bit lost on us we just wanted to pour the stock over the dish rather than mess around with two bowls but thankfully the old faithful tonkotsu ramen, £11, was spot on. We couldn’t get enough of the mountain of slippery noodles in the rich pork liquid with slices of soft pork belly, half a soft boiled egg, bean sprouts and spring onions.

There’s one pudding on the menu, choux with homemade custard, £3.50. But after such a fantastic array of flavours in the first two courses, the choux seemed somewhat bland by comparison.

What about the drinks?

On our visit the drinks license hadn't come through yet but the Tesco round the corner was doing a roaring trade. We knocked back a bottle of Prosecco with our pork broth but now the license is back, and for good, with the menu including local beers from the Beavertown Brewery and The Kernel Brewery, Japanese beer, sake and shochu as well as specialist whiskies and a handful of natural wines that will change from time to time.

There hasn’t been a big fuss made out of the new opening yet and at the time of writing it isn’t even listed on the Tonkotsu website but we reckon that, just like its older sister, it will be something Londoners will be queuing round the arches for. There’s lots to love about the new East London hotspot, staff are friendly, food is very reasonably priced and the Tonkotsu ramen is comfort food at its best.

Prices were correct at time of writing. Hot Dinners ate as guests of Tonkotsu.