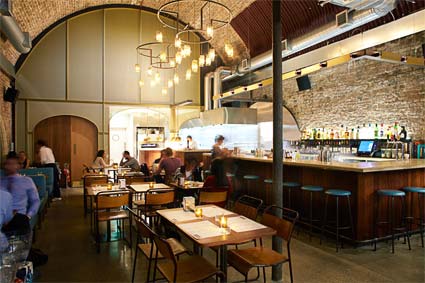 What can you tell me about Arabica

Arabica have been a popular mainstay of Borough Market for 14 years, selling mezze and more. So it's a particularly big deal to see them open their first restaurant in the same place. You can expect a strong mix of Levantine cooking and mezze (check out more about that on Wikipedia) from Arabica founder James Waters in the kitchen as well as a cocktail list that Geoff Robinson, ex Bar Manager at Happiness Forgets, has helped them with and a wine list from Zeren Wilson (aka Bitten and Written). All that and ex Dinner and Lockhart man Bunmi Okolosi in charge of front of house means for a pretty strong team all round.

It's all about small plates at Arabica, so an affinity to those is a start. But it should be a draw for anyone in the area who either wants a decent drop of wine or wants to work their way through the Levantine menu. Fans of the Arabica stall will clearly enjoy this and it can easily be recommended to anyone in the area who's after a relaxed evening out.

It's right in the heart of Borough Market itself, across the way from Elliot's, opposite Brindisa and about two minutes walk from London Bridge station.

You could follow our example and take the opportunity to sneak in a quick cocktail at Aqua Shard, which we're always happy to recommend. But around Borough itself, the options are obviously great, with a number of pubs - the Royal Oak is one to single out - or the aforementioned Elliot's if you're in the mood for some natural wine. And you should also leave room for a cocktail to kick off the night at Arabica too.

We like the booths by the left wall (which is where we were) - ideal if there are four of you. Alternatively this place comes highly recommended for some counter dining too.

We worked our way through a large part of the menu and the majority of the dishes we had were recommended to us - so anything on the gallery below is worth a punt.

However there are a few things that are worth highlighting particularly - starting with the hummus. Or more specifically, the hummus that had the added extra of Herdwick lamb fillet and ghee. We started referring to this as "pimped up hummus" but after talking to Arabica's James Waters, it's clear that the name he's dubbed it "dirty hummus" suits it far better (so much so it's almost worth calling that on the menu). It's the absolute must-order item on the list.

That's not to bring down the rest of the menu which is full of gems, including:

Honestly,  everything on the menu that we ordered (with a possible exception of the desserts which was largely down to our own tastes) is easy to recommend. And we're already planning a second trip to try more.

With Zeren Wilson behind the wine list, there's plenty to choose from whether you prefer to stick to known wines or experimenting with some new discoveries. We'd recommend the latter, particularly the Yarden Israeli Chardonnay or the Gruner Veltiner from Birgit Eichinger. On the list, wines start at £19.50 with five whites and seven reds under the £30 mark - very good for such a central location. Cocktails are £9 and tend to be twists on favourites, like the Sassine Square (high-rye bourbon, date syrup, bitters) which is inspired by an Old Fashioned.

That we're already actively planning our second visit should be recommendation enough. It's a great mix of a menu you can happily plough through, a cracking drinks list and a lovely, laid-back atmosphere. We think it should have a long future at Borough.

Hot Dinners were invited to eat at Arabica. Prices are correct at the time of writing.