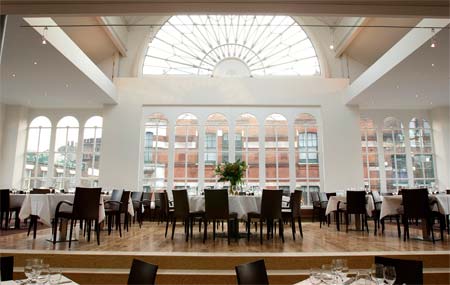 What can you tell me about Roast?

Opened in 2006 by restaurateur Iqbal Wahhab, who founded the Cinnamon Club, Roast has perhaps suffered from inverse snobbery over the years - foodies preferring the 'authentic' Borough experience of scoffing on pavement edges or on the hoof, rather than seeking out the comfort of this restaurant. It's always served up perfectly serviceable fare - decent breakfasts and Sunday roasts - but nothing really to rock the culinary boat.

So the arrival of new Head Chef Marcus Verberne, who worked alongside Mark Hix for over a decade at places including Le Caprice, J Sheekey, The Ivy and Hix at The Albemarle where he was Head Chef, made Hot Dinners consider trying it again.

It's in the old Floral Hall of Borough Market. Look for Roast's market-level stall and you'll spy a lift door beyond, waiting to whisk you away from the tourists to optimum people-watching territory.

There's a good-sized bar here, but on weekend lunches it does get taken over by diners. If you're lucky and nab one of the barrel tables outside Wright Bros in the sunshine, then that's as good a place as any. Otherwise there's Wine Wharf at Vinopolis or the golden oldie George Inn on Borough High Street.

A hard one this - on the one hand, if you're a solo diner or couple, then the bar tables along the floor to ceiling window overlooking the market occupy prime people-watching territory and there's a range of newspapers to keep you happy if you're on your tod. But larger groups will want the elevated section of the main restaurant where - if you're by the window - you can watch the crowds below whilst also enjoying a great view of St Paul's and the passing trains.

When chef Marcus arrived, he promised his menu would feature his two key passions - seasonal British produce and foraged foods. The Spring menu we tried showed he'd made good on his promise. We kicked things off with some Wye Valley asparagus served with sea salt and an exemplary hollandaise sauce, then some cracking Irish saltbeef croquettes (£8.75) which came with a horseradish mayonnaise and a dandelion salad. But the best dish of the bunch was the fried Manx Queenies (£12) which came with wild garlic - one of the dishes where you make sure every teeny bit of fishy, garlicy butter is sopped up with the lovely sourdough bread you're given.

For mains, the youngest member of our group opted for the children's main course - a rotisserie chicken and chips which came with a cucumber and tomato salad - all of which she made short work of. We also tried the Newlyn monkfish curry (£27.50) which was good, but suffered by comparison to a similar dish we'd had at Sheekey's. And finally, there was the wild rabbit and cider pie (£22.75) with Herefordshire snails and ransom, served up with a great mound of buttery mashed potato. This was the clear winner - so order if it's there.

As for desserts - the dessert menu at Roast certainly reads the best of any menu currently in London. It took an age to decide what to go for, but we eventually picked the Green and Black soft-centred chocolate pudding (£8.75). Sadly our junior companion couldn't be persuaded to try the rippled sea buckthorn berry ice-cream, swapping it out for vanilla instead, but she practically licked the plate clean, so let's presume that a success. Our other dessert was also a winner - a deeply eggy Trinity Burnt Cream (£6.75) which was studded with cherries macerated in Julian Temperley's eau de vie. As good as it sounds.

Our wine accompaniments were mainly an English affair. Roast has had two wines made specially for them by Chapel Down, so we had a glass of their Roast ‘Chapter Two’ 2008 sparkling wine to start and one of their Chapel Down Bacchus Reserve, Tenterden 2009 to go with the pie. Both were good, but the Bacchus Reserve in particular would convert anyone who was on the fence about English wine. Our Burnt Cream dessert was perfectly paired with a glass of Blandy's madeira.

There is a three course set lunch for £30 which looks good, but if you're going to go a-la-carte then lunch for two would probably come in at around the £120-£150 mark with a few glasses of wine.

Clearly Marcus's arrival has revived Roast, turning it into the kind of restaurant you should really seek out. The menu is interesting, and happily the food lives up to its promise. Obviously it's particularly good at weekends when the market is on, but the great service would also mark it out as a good place for business lunches too. We'd forgotten what a great view this dining room has as well - in its own way, it's just as impressive as those on the river or high above our streets.

Hot Dinners were invited to eat at Roast. Prices are correct at time of writing.