French fine dining with a rustic edge: we Test Drive Hélène Darroze at The Connaught 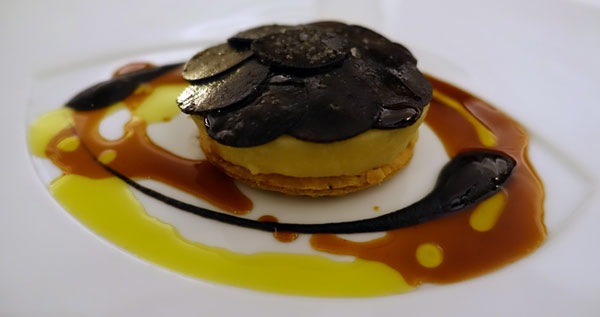 French chef Darroze has been in charge of the hotel's dining room since 2007, gaining her first UK Michelin star here a year later and a second in 2011, making it one of only nine restaurants in London right now with two. If you google her, Darroze's biggest claim to fame is probably being the inspiration for the character Colette in Ratatouille.

The Connaught, duh. One of London's Grande Dame hotels and part of the same group as Claridge's and The Berkeley. Tucked away in the middle of Mayfair it's beloved by celebrities, the super rich and folk that love their food and drink (the Beaufort Bar here does an excellent Martini).

Where should we meet friends for drinks first?

One of the closest pubs is The Punchbowl which has recently had a major do-over and is worth popping into for a drink - the wine list is pretty decent. We preferred to keep our evening solely at The Connaught and kicked off with a cocktail at The Coburg Bar in a nice table in the conservatory overlooking the Tadao Ando water feature on Carlos Place. A Sidecar (£16) and Pisco Cobbler both came promptly (which is never a given, even in the best of London bars) and were very well made.

Our preference would probably be in the front part of the dining room, closest to the windows. Our table this time was by the (very posh) waiters' station which did mean HotDinners2 occasionally got his seat bumped into by waiters whisking by. If you want to stay out of the limelight, choose a table to the left as you enter. That's where we spotted Lionel Richie on our visit.

We'd seen photos of the menu online which piqued our interest, having had something very similar when we lunched years ago at Eleven Madison Place in New York. We were given what looks like a wooden solitaire set, but the balls all have ingredients on them, representing a different dish on the tasting menu. There's a separate paper menu to expand on what each course involves - so, for example, "Onion" comes with black truffle, barley and lardo di Colonnata. Having decided how many courses you're having (5,7 or 9) you remove the unwanted balls from the centre of the board. It's fun and cunningly makes you rethink how many courses you want to go for. We came in determined to stick to 5, but had upped to 7 in just minutes (no will power at all).

Our waiter was on the money with this one. He'd rattled off the dishes he really rated when we sat down and all of his recommendations were all ones we'd agree with. Of the courses we had, what really stood out were:

You must go for the boozy baba for dessert - choose from either a 1988 or 1997 Armagnac to be poured all over it and ours came with a delicious apple parfait.

Oh, and don't miss out on the amazing scarlet cone of espelette butter that comes with the bread. If they sold this, we'd have bought a tonne of it to take home with us.

Well this is a two Michelin-starred restaurant, so yes, the wine list is on the pricey side. The cheapest you'll get away with is £35 for a bottle of Verdejo or Minervois. But that wouldn't really be the point of coming here. We went a little north of that, guided by our sommelier to a lovely bottle of Cheverny from Domaine de Veilloux which was around the £50 mark. But if you've been having a really good year at the office, you could go quite mad here and blow £32k on a bottle of 1961 Chateau Latour.

Incredibly welcoming staff and one of the most comfortable fine dining rooms in London make Hélène Darroze at The Connaught a lovely place for a special occasion meal. Come here to be cosseted, but not overly fussed over and to enjoy food that's most enjoyable when it strays from the usual French Michelin fare.

Hot Dinners dined as guests of The Connaught