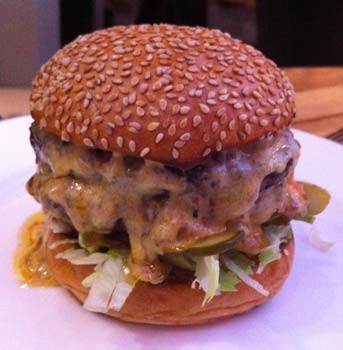 When sloaney Chelsea favourite, the Admiral Codrington got a makeover and a new Head Chef to boot last year, Hot Dinners was right in there in the first few weeks to check out this new gastropub restaurant. So far so good. Until it transpired over the intervening months, that we'd made a huge tactical error in not trying chef Fred Smith's burgers when we went. As word spread on Twitter about the legendary goodness of said burgers, it was clear a second visit was going to be needed. And when Fred unveiled a new special burger - the Double Cheese Stack that frankly looked like a heart attack on a plate, we were over there in a heartbeat.

The dining room at the Admiral Codrington is a room which thumbs its nose at modern restaurant design trends for either street-chic or minimalism - it's nicely laid out and very, very comfortable. We nabbed one of the best tables in the room - at the back on the side so the two of us could both look out, but the booths and round tables all looked to be popular.

Knowing that we were going to be seriously pigging out, we waved away the starters - nice as they sounded - and went for snacks instead, which were a plate of lovely deep fried fish goujons with a really good tartare sauce and a perfect little pot of crackling served up with warm apple sauce. Everything came with a smile or a suggestion to make our meal better - really the Ad Cod's serving staff could put a lot of the places we've eaten out recently in London to shame. They were, to a person, utterly cheery and lovely.

All of which preamble brings us eventually to the main event - the burgers. Fred's cheeseburger is always on the menu - lunch or dinner - but to enjoy his regularly changing 'specials' you'll have to come here for lunch. As a taste comparison one of us ordered the cheeseburger (£15), the other the Double Cheese Stack (£16).

Although it suffered by size comparision to the special, Fred's cheeseburger is by no means a also-ran. A perfect brioche bun with oozing cheese, this burger was cooked medium to perfection with a shard of crispy pancetta on top, pickles and an onion and tomato compote. The main event of the evening - the Double Stack - was a triumph too.   Although the patties are slightly smaller, the large double stack soon becomes an oozy mess of deliciousness - particularly enhanced by the bacon-infused cheese.

Indeed, to fully enjoy the special it helps to know the degree of chef perfectionism that's gone into the making of it. "The cheese on the Double Cheese Stack is made by infusing cream with bacon and Parmesan rinds then melting in cheddar, aged Parmesan and American cheese," Fred told us. It's then chilled and portioned before being sliced on to the Double Cheese Stack. The good news is that this cheese will now also be used on the regular cheeseburger. Fred has a similarly hands-on approach to his meat, buying it in from Darragh O'Shea and then ageing it in-house himself.

Putting it all together, these are some of the best burgers we've ever had in London - and that's saying something. And as long as you don't mind getting down and dirty with your burger while everyone around you may well be eating a more elegant meal then that's fine.

Both burgers came with fries - which were the only slip-up. They were perfectly crispy but a heavy hand on the salt shaker meant we had to wipe the chips before we could eat them. Throwing caution to the wind (we'd made sure to wear expandable trousers) we also ordered a bowl of wild garlic mash which on its own was a good enough reason to come here, whiffing faintly of garlic and slick with butter and cream.

So to sum up, we flipping loved The Admiral Codrington for its burgers, its friendliness and unassuming but deliberate attention to detail. Here's a place that doesn't make you queue or book months in advance. It serves up brilliant burgers every day of the week in a comfortable dining room where the waitresses look after you like royalty. And in today's dining scene, that's enough of a USP for us.

The Double Cheese Stack is available up until (and including) the 19th April 2012.  There are regularly special burgers on offer, so always ask.

Find out more about the Admiral Codrington