[SIGPLUS_EXCEPTION_SOURCE] Image source is expected to be a full URL or a path relative to the image base folder specified in the back-end but /blog/2014/bubba-gump/gallery/ is neither a URL nor a relative path to an existing file or folder.
0
Shares 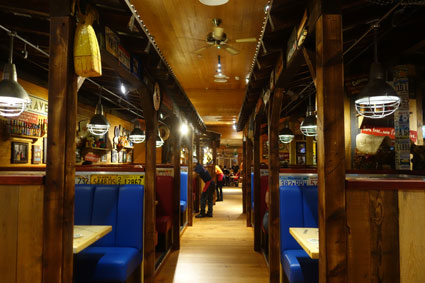 What can you tell us about Bubba Gump.

Put simply - it's a theme restaurant. They're becoming something of an endangered species in London, often for good reason. This one is, somewhat bizarrely, based on the Tom Hanks film, Forrest Gump - specifically the Bubba Gump chain of restaurants that he opens in the film. So it's a real shrimp restaurant based on a pretend one.

But in the years since the film, it's also become a very, very popular restaurant across the US and beyond. It may not be haute cuisine, but very few new openings on Hot Dinners have caused as much interest as the Bubba Gump opening, with many raving about the food.

So, putting our preconceptions aside, we popped along to see what you can expect from a visit to Bubba Gump.

It's really all based on the film?

Oh yes. It really is everywhere you look, from the TVs showing it in every room (without sound), the mini Mama Gump house in the middle of the restaurant and the signs to attract the attention of the staff - "Stop Forrest Stop." So if you really don't like the film, then this absolutely isn't the place for you. However, once you've sat down and got through the obligatory trivia questions about the film, it's not quite as all pervasive as you might be fearing.

In a word, HUGE. It's almost tardis-like as an apparently normal sized restaurant opens up into a behemoth as you walk round a corner. It takes the first floor of the original Planet Hollywood and what used to be a part of Sega World too. So yes, it's big.

So, it's a theme restaurant and it's massive. But is it any good?

You'd expect the answer to that to be a simple "no" but that's really not the case here.

To start with - like the restaurant itself - everything to do with the food and drink, from the menu to the size of the cocktails is enormous. So it's unlikely you'll find many people who have been through the whole thing, But here's what we can say - there were quite a few things on the menu that we really enjoyed.

Two of those dishes in particular have been what readers of Hot Dinners have been tweeting us about. First there's the seafood hush pups (£7.25) - deep fried shrimp, fish and corn. These were the very definition of "moreish" and had us fighting over the last one. And then there was the coconut shrimp, which is all anyone mainly seems to talk about when they mention Bubba Gump. We had them and can see why people love them so much. Right now we can say that we'd happily have those again any day, and also the tempura shrimp which were cooked in a light batter that would put many upscale restaurants to shame. All that was served with cold shrimp (nothing special there) and chips and came to £19.50, which was pretty good value.

Also well worth a mention were the steamed snow crab legs, served with oulled butter and jasmine rice.

We did have fish tacos and onion strings, which were both in the "just OK" category, but overall we were left pretty satisfied with what we had for what it was. As for dessert - every portion was so massive we couldn't make it that far through the menu.

Did we mention that everything's huge? Well extend that to the cocktails too - take a look at the gallery below to see what we mean. We had a Patrón margarita that came with another full size shaker of more margarita (£10.95). And that was the small one. That pomegranate punch? That's about twice as big as it looks in that picture (£8.45). Wines are available too, starting at £18 a bottle, and plenty of soft drinks - including ones that come in glasses that light up and you can take home with you. We really wanted one...

Bubba Gump is not high-end cuisine and it has a look and feel that would bring most London foodies out in hives. But if you go in expecting some sort of underground dude food place you'll be disappointed before you even sit down. Don't get us wrong, we fully understand that this restaurant isn't for everyone - and that probably includes a lot of Hot Dinners readers. But ultimately, we had some very good shrimp at decent prices for the middle of touristville and left happy and full.

Hot Dinners were invited to eat at Bubba Gump. Prices were correct at the time of writing.